The new Pivot Shuttle eMTB brings more power, more travel, and all in all - greater capability.

Pivot are a leading boutique mountain bike brand, and not one that rests on their laurels. With a passionate following around the globe thanks to the ride characteristics offered by their DW-Link suspension, Pivot are always looking to update and refine their bikes, even if it means ruffling a few feathers in the process. To this end, Pivot are one of a few companies that use the Super Boost rear spacing, as it allows them to deliver the handling characteristics they want riders to have, without compromise. Recently, they have been doing thorough updates throughout the whole range. From the racey Mach 4 SL, to the Trail 429, Mach 6, Switchblade and most recently the Firebird. The versatile Pivot Shuttle eMTB was updated last year, with refinements to the carbon frame to house the new Shimano EP8 motor and larger battery, the Pivot Shuttle also gains bigger wheels, more range, and more travel in the front end with a stiffer Fox 38 160mm travel fork. I had a Pivot Shuttle on test a few years back, and clearly the big change here is the move to 29" wheels. It's impressive that the chain stay length only grew about 5mm with this move. The original Pivot Shuttle was the lightest eMTB we had tested at AMB at the time, sitting at 21kg. While the Specialized Levo SL and Orbea Rise come in lighter, they don't have 726Wh batteries. The Shuttle is still a reasonably light overall package at 22.55kgs, but probably also more capable than the original thanks to a stiffer fork with more travel, bigger wheels, and the increased range and efficiency.

Take a look at more of our eMTB reviews:

Ok first up, I admit it looks the same with no visible changes to the carbon moulds, bar the battery access and charge ports. All the geometry changes to allow for the 29 inch wheels and modern trail/enduro requirements are done via the alloy DW linkages, and the mainframe has not slimmed down or added room for a bottle.

The Team XTR model we have on test is dripping with top components. From a Shimano XTR 12-speed group set, to a Fox Factory e-MTB 38 with GRIP 2, and a DPX2 rear shock. The wheels are DT Swiss EB 1535, which are eMTB specific wheels, wrapped in quality Maxxis rubber. To keep the weight down, Pivot have equipped the Shuttle with EXO+ casing tyres, I will be running the pressure high and hoping they are tough enough for e-bike duties, time will tell. The Fox 38 up front tells you the Shuttle means business.

In terms of geometry, the reach has actually come back 5mm from 465mm to 460mm, likely due to the increase in travel from 150mm to 160mm, along with the wheel size change. The rear travel stays at 140mm, and the bike is a 29" platform, as opposed to a mullet or mixed wheel set up like many new eMTBs. I have found that the mullet platform does work to an eMTB's strengths, but on the other hand, 29ers roll over more and are fast. Given that Pivot still deliver a 441mm chain stay length, they aren't compromising on handling by sticking with two big wheels.

The head angle is 64.3 degrees across all four sizes (we have a large on test) and the virtual seat angle is 74 degrees. The 460mm reach on our large is pretty middle of the range for modern eMTBs. Some are longer, but this is about where many brands are settling. The fork has a 44mm offset to work with the slacker head angle.

Of note, the Pivot Shuttle frame is full carbon, and the battery is 726Wh as stock, although smaller (and lighter) battery options are compatible. The battery has a two bolt release option from the underside of the down tube and actually takes up very little of the immense down tube and motor protective housing. The cable management is well thought out and silent during the most rigorous terrain. 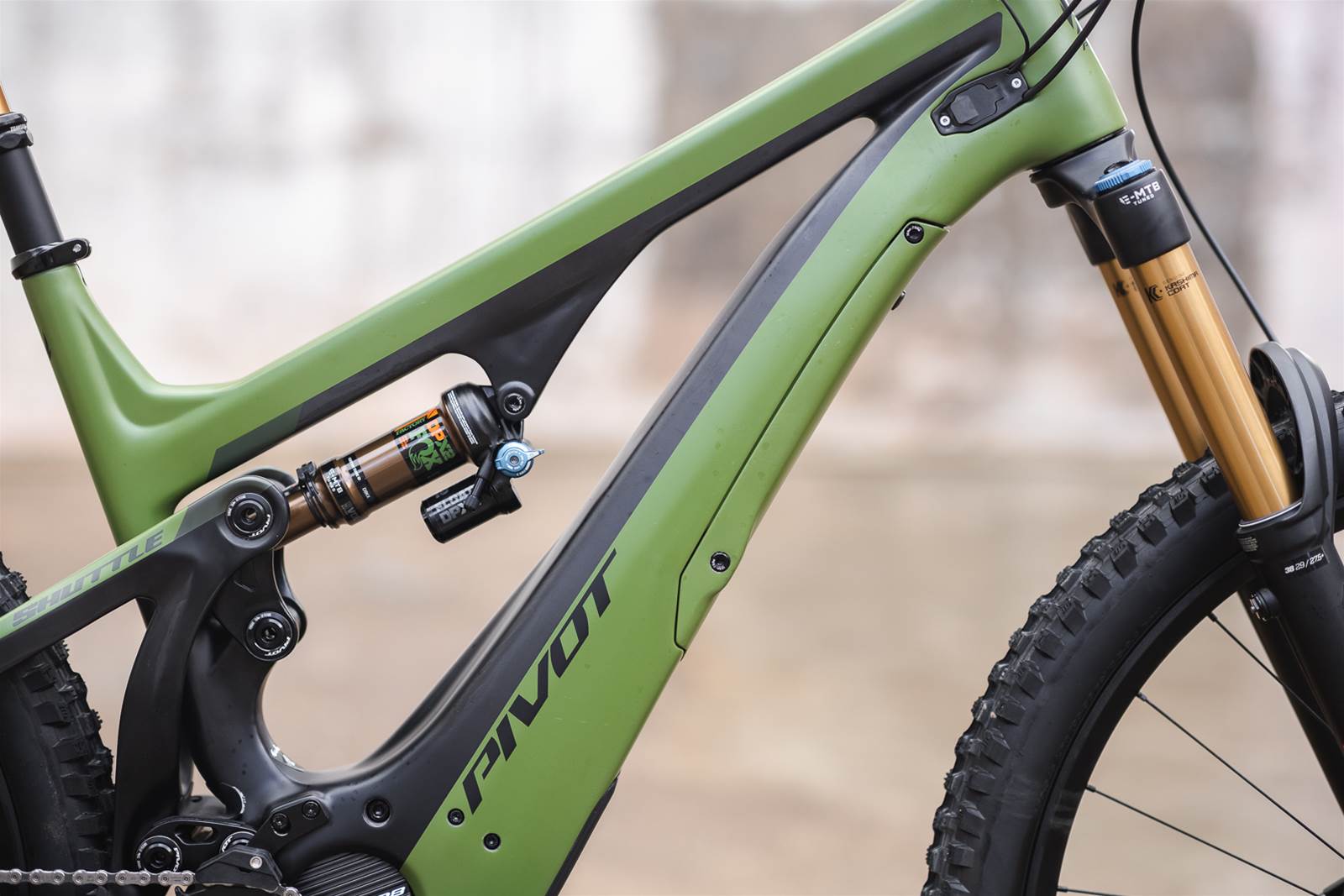 The downtube is a girthy one.

I have reviewed quite a few eMTBs with the new Shimano EP8 motor, but none paired with such an efficient linkage as the DW link equipped Pivot. The last Shuttle I tested was equipped with the E8000 motor which was super punchy when roused, while the bike wasn’t always overly stiff underfoot. The new Shuttle, be it the redesigned linkage or the smooth yet torquey power delivery, climbs exceptionally well regardless which position the shock is in, fully open in the Descend mode or Trail mode were where we spent most of our time which is testament to how well Pivot Shuttle climbs. Ryan enjoyed the Shuttle on the climbs.

The 460mm reach on our size large test bike has the geo sitting towards a more conservative range but very comfortable for a 178cm rider. The effective seat tube angle of 74 degrees worked out to be an actual 69 degree angle and does put riders with longer legs over the rear wheel further than some of its competitors. Tall riders will find that on sustained climbs this is less comfortable, and you will need to slide forward more to keep a good balance point. Shimano’s 12 speed XTR group set shifts incredibly under load with their Hyperglide Plus drivetrain parts. When paired with the smooth delivery of the EP8 the system just works even when shifts are poorly timed or desperate when messing up a techy climb. Pivots own “pro E-bike” saddle is brilliant, not only comfortable but with an integrated handle at the rear for lifting and maneuvering the rig over obstacles or loading it up it's useful as well.

Riding Experience: Decades on two wheels on and off camber, in the air and on the ground.

The bottom bracket is higher than I am used to at 35.8mm, but surprisingly it makes technical climbs easier to clear, with less pedal strikes and loss of forward momentum with the EP8 assistance remaining on the boil. Pivot have specced the Shuttle with 165mm cranks and this combination with the higher bottom bracket, smooth EP8 power delivery with increased torque and efficient DW link make it one of the most proficient climbers available.

The Darfon 726Wh battery is the largest battery I have ridden and powering the efficient EP8 Shimano motor it goes and goes. With 1000m of climbing straight up, only 2 of 5 bars were used in Boost mode, we would normally ride in Trail mode which is better mannered and far more economical but everyone always asks how many metres vertical can you get in Boost. I managed to squeeze 2150m of climbing in Boost which is nearly a full extra lap of Stromlo Forest Park over the Specialized Levo on a multiple hour up and down slogfest. The Darfon Battery lets you get more time out on the trails!

Now, what really matters to many is the Shuttle's ability to descend. You can self-shuttle your favourite trails, lap after lap. The Shuttle, even with its huge 726Wh Darfon battery only weighs in at 22.55kgs with pedals, the majority of that being pretty low and central which makes it feel balanced and responsive. Pivot’s tweaks to the geometry are positive and inspire more confidence when pointing down the hill with the slacker head angle and the extremely capable Fox Factory 38 to keep things on track. Impressively Pivot has kept the chain stay length short at 441mm even with the 29 inch rear wheel which allows for both a stable ride and maneuverability when getting into the tight stuff.

The new Shuttle certainly feels most at home tackling technical climbs, flowing trails and big mountain adventures with its efficient DW-link suspension platform and choice selection of components. While the shuttle behaves when descending through the rough and tumble trails, the thinner sidewalled tyres and slightly under-sized rotors remind you of the Pivot Shuttle's intended use as a light weight, all day E-trail bike with a big battery and all the fruit you could want hanging off it. 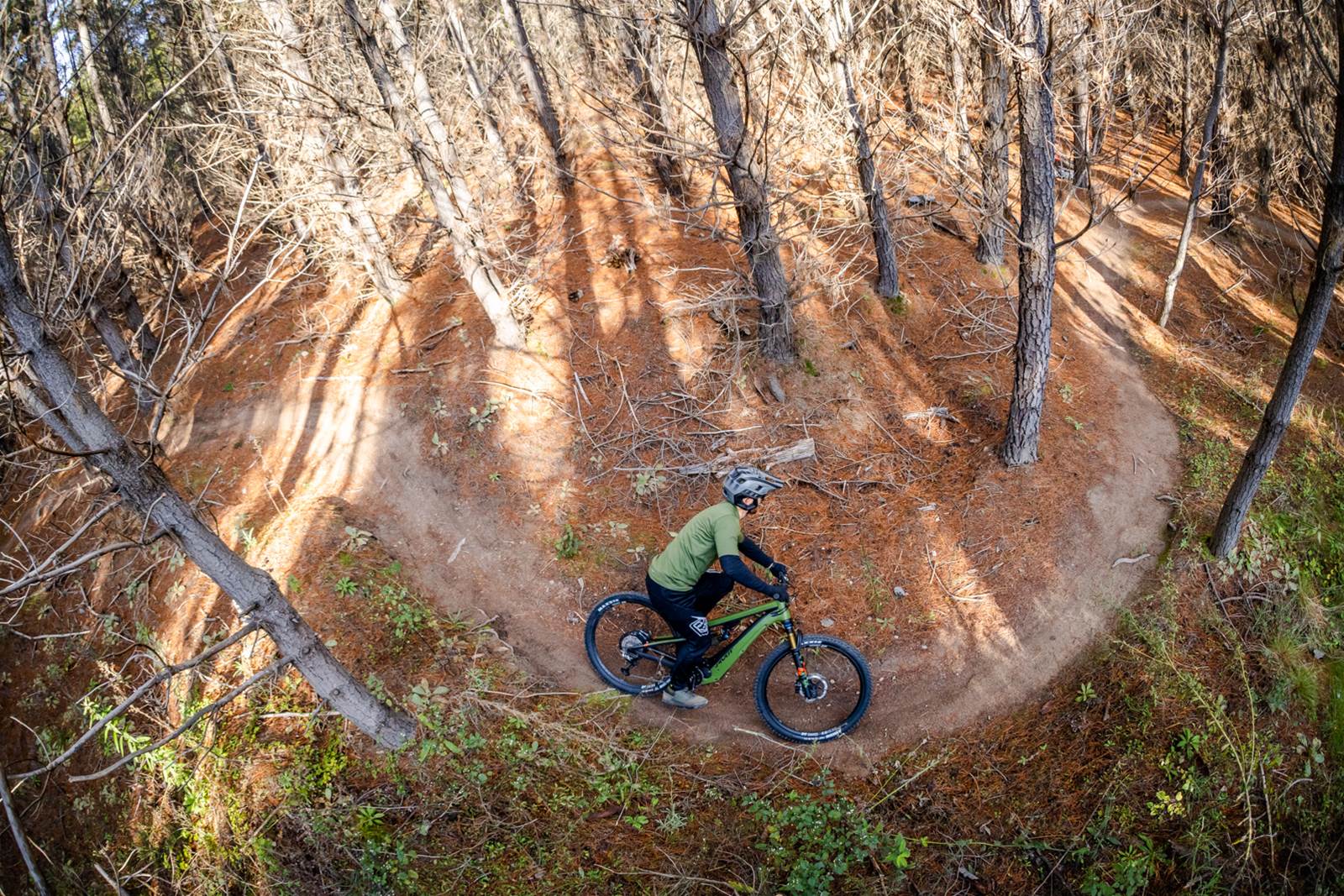 Ryan thinks the Shuttle is more suited as an all day machine.

With a near class leading battery, all the best components crammed into a lightweight, DW-link equipped bike, the Shuttle does offer riders incredibly good value and a refined ride. But has decision to retain 29 inch wheels front and rear kept it ahead of the competition? I think anyone looking for an eMTB that is light, truly capable and with the range and assistance available from full size batteries and a Shimano EP8 system's 85Nm of torque will find this a very attractive bike. On the other hand, perhaps a slender new mainframe, mullet wheels and some heavier duty tyres would broaden the Shuttle's skill set and overall market appeal. While some may be put off by the sticker price, you are left wanting for very little from the parts on the bike, making it a perfect match to the high quality DW-link suspension and full-carbon frame.