When Specialized broke cover with the Levo SL, a lightweight eMTB with less power, less range and a higher price tag I wasn’t sure what to think. Despite being open minded I didn’t understand why anyone would want an eMTB that delivered less power. So I was eager to find out what the fuss was about. I reviewed the Specialized Kenevo earlier in the year, a bike that I feel was the start of a wave of super capable eMTBs with long travel, huge power and range. The Kenevo knows it is never going to be a welter weight trail bike and owns it, the Levo SL sits to the other end of the spectrum and does away with all the excess. Like many bikes, understanding their intended use and character takes an open mind and time in the saddle.

The Levo SL rounds out Specialized’s eMTB offering beautifully, letting riders choose from the lightweight Levo SL, the more powerful and trail ready Levo or the hard hitting shuttle beast that is the Kenevo. No other brand offers such a deep range of pedal-assisted bikes, this in itself is a remarkable feat and an exciting sign of things to come.

Rather than focussing on the amount of peak watts, Specialized have kept the message clean and simple, the Turbo Levo SL is 2X you which does relate to a 240w peak and 35Nm assistance or effectively doubling Joe Blow on a climb which is more than noticeable. The Levo SL is you riding a Stumpjumper only faster. 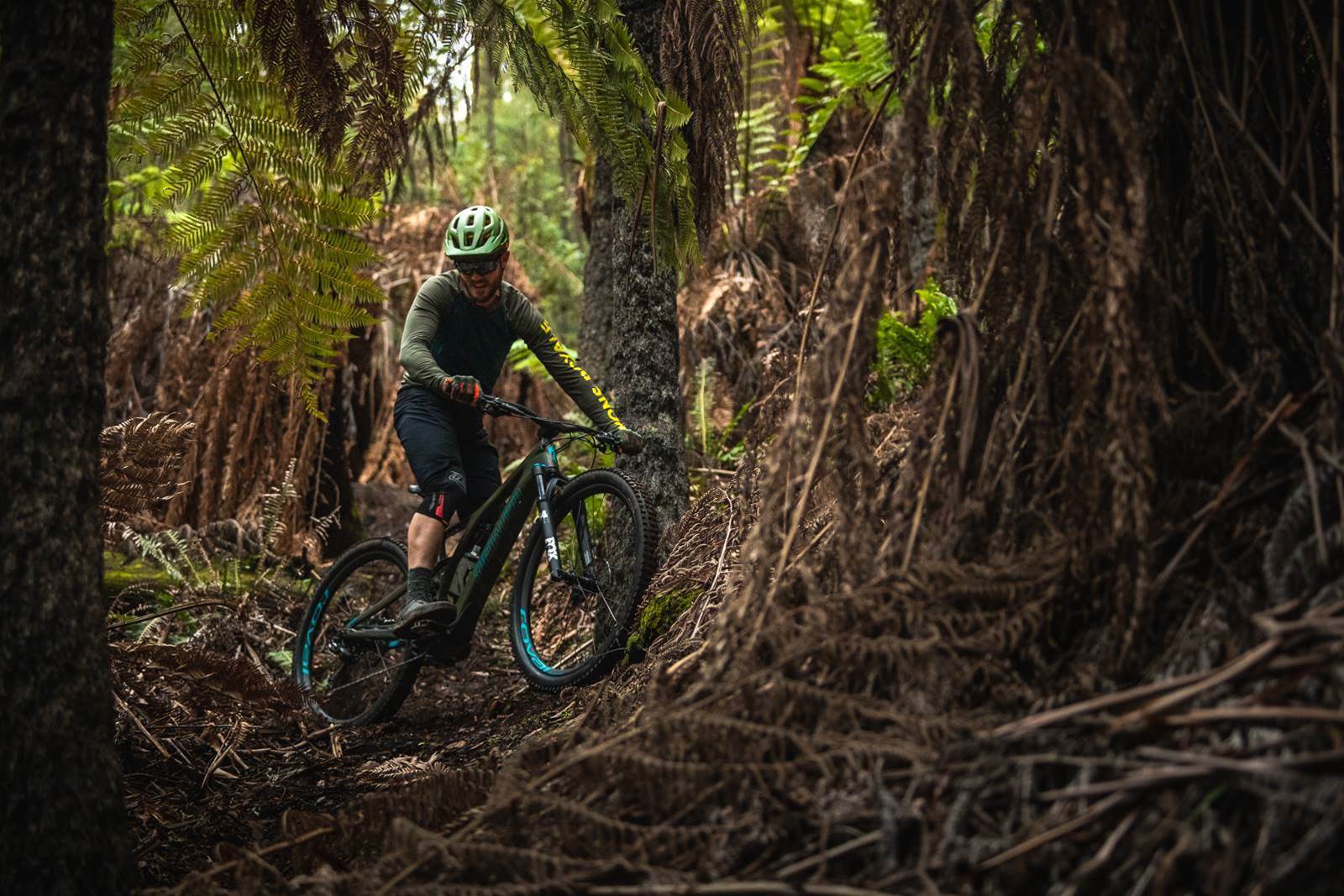 As you would expect from Specialized the Levo SL is sleek, simple in its appearance and has nothing out of place across its 29er specific chassis. From most angles, The Levo SL looks exactly like the current Stumpjumper with its side-arm mainframe design and when overlaying the geometry charts the numbers are almost identical. The Levo SL’s head angle is the ideal trail angle of 66 degrees and has a virtual seat tube angle of 74.2 degrees and has a reach of 455mm (size large) which in today's landscape is on the shorter or more conservative side but albeit 10mm longer than the Stumpjumper.

The Levo SL utilises a slightly longer stroke 210mm x 52.5mm shock than the 140mm travel Stumpy and bumps the rear travel out to 150mm or there abouts. It retains a nicely machined stainless steel flip chip that will slightly slacken the bike by half a degree and lower the bottom bracket, a feature that has become common place across the industry. Its important to note the Levo SL’s frame is not designed to run a 27.5+ rear wheel, this would sit the BB too close to the ground and you would experience rear tyre clearance issues as the frame's max tyre clearance is an ample 2.4 inch with good clearance. With so many similarities, the question is how the hell have Specialized got a motor and battery in there? The answer is building their own motor, the SL 1.1 which is a scant 1.95kgs and a kilogram lighter than the Levo motor. The SL 1.1 motor is much smaller in size which enables the reduction in chain stay length back to 437mm which is the exact length of the Stumpjumper and many popular 29er enduro bikes available. Typically eMTB chain stays are 455mm to 485mm and when pairing that with a already heavy fuselage, manualling, jumping or wrangling them in any direction can be an absolute chore and this is where the Levo SL excels.

Along with a removable 320Wh downtube battery (the motor does need to removed first to slide this battery out), Specialized offer a 160Wh range extender battery which weighs just over 1 kilogram and fits securely into the bidon cage. The TCU (Turbo Control Unit) has ten LEDs each representing 10% battery life and having the ability to depict both internal 32Wh storage and 160Wh Range extender battery percentages. Blue LEDs indicate internal, while green refer to the range extender should you have it plugged in, neat stuff! Specialized always nail the details and their own in-house touch points certainly feel like quality offerings. The grips and saddle are comfortable and the perfect match for long rides, the bars have a familiar feel about them and while light, are sturdy and built for rowdy riders.

Keeping the weight down and the ride lively are the Roval Traverse Carbon wheels with a 30mm hookless internal profile and sturdy 2.3 inch GRID trail casing tyres with Specialized’s GRIPTON compound. The Levo SL is equipped with a durable steel freehub and could be the first eMTB that should be fitted with a 12-speed drivetrain given its lighter weight and lower power output. Bigger and more powerful eMTBs chew through gears like termites and really should be using a dedicated 8 speed group set like SRAM’s durable EX1.

Our size large test bike weighed in at 17.65kgs and was setup tubeless by the team at Specialized Australia prior to the review. The only two things that raised an eyebrow with the Levo SL Expert Carbon were the lower end Fox 34’s GRIP damper which in the past has provided a bit less tuning and support than I have wanted and a 30 tooth front ring. I get that spinning keeps the motor on the boil, but I suspect that I will be in the the hardest gear most of the time, wearing out a 10 tooth cog that will render the whole cassette useless.

The Levo SL is easily the lightest eMTB I have ever tested and as such comparing it to a “regular” eMTB is hardly fair. The Levo SL really feels more like a Stumpjumper than a Turbo Levo until you start pushing the pedals. After owning a Stumpy the feeling on the trail, be it in turns or charging in the rough, the Levo SL I think feels more stable. Perhaps it’s the ever so slightly longer wheelbase, 10mm longer reach or 0.5 degree slacker head angle however it is most likely the additional weight which is centred and low down. The lower weight makes manoeuvres such as jumping and manualling a breeze rather than the usual battle of wills to change direction of any kind. I was surprided at how much assistance is delivered from less than half a Turbo Levo’s powerplant. Specialized’s notion of 2x you is an accurate one, the Levo SL still hauls you up the hills quickly but in a very well-mannered way. Not only in the way the power is delivered but the way it eases up. Most eMTBs feel like they hit a literal wall when assistance ceases and it makes that 25kph limit feel horrible, yet the Levo SL seems to ease up a little earlier and fade away. The SL1.1 motor disengages and creates no noticeable drag when it cuts out or should I say “fades out” which when removing the chain is confirmed as the cranks spin as freely as an analogue pair. The new SL 1.1 motor does make a higher pitched and possible louder whirring noise, but when compared to other platforms I have tested its not by any means loud.

A sightlier heavier Stumpy with a motor filled me with confidence on the trails, both up and down. There is no climb at my local that couldn’t be mastered, the light manoeuvrability, the ability to practice the section over and over or the additional power for the steeper line made for some very rewarding sessions. Tech climbs on the Levo SL are made so much easier than other motors due to the seamless delivery and fade out of the assistance. There is no jerky on and off - just more power when you pedal, creating a very intuitive and natural feel when riding.

With 150mm of travel front and rear, the Levo SL is very capable across the majority of trails you would encounter on a day's adventure, an assisted goat that handles beautifully on the downs. To keep weight down, Specialized has kept the spec on the lighter side of trail which given the two burlier Turbo models they offer makes perfect sense and the reduced weight makes for an exciting ride. Sure there are harder hitting and more capable eMTBs available in the market and within Specialized’s own lineup. But if your are looking for an eMTB that rides like a bike then you need to swing a leg over a Levo SL. During the review, I did try a few different spec changes such as a 160mm beefier fork with more consistent damper and heavier duty wheels and tyres but found that despite the more capable demeanour it did take away from the what makes the bike so likeable. It did lead to other changes such as a seriously light carbon wheel and tyre package and then wondering how light is too light and how well-rounded this package really is.

There were some pretty wild conditions during the duration of the test and the Levo SL ran flawlessly without a hitch in wet and sloppy terrain. As expected, the 30tooth front ring was an odd match on my local trails and I spent the majority of the time in the harder gears, a 32 or even 34 tooth up front would provide a more even wear across the cassette and less chain noise too.

As someone who openly questioned the validity of the Levo SL, I am happy to report I was wrong and understand why Specialized have broadened  their ever expanding offering. Their efforts collating ride data through the Mission Control App has defined the scope and the outcome is pretty amazing. Is it a bike that I would use to shuttle laps of a bike park or tow a mate up the hill and out of a dark place? Probably not, it does excite me to ride an eMTB that feels like a bike even when turned off and then propels me back up the hill when I need it to.

Yes it is expensive, as is everything in the current climate, but with time and further development this technology will trickle down and become more accessible. We are on the verge of a split in eMTBs as we know it, the super light option offers bike like handling and mannerisms and the long range, long travel choices that throws caution to the wind and asks for more.

If eMTBs have put you off due to their weight, lack of manoeuvrability or their bulky appearance and stigma, consider a Levo SL! Most people didn’t even notice I was riding an eMTB, that’s how sleek it is.