The Cube Stereo Hybrid 140 might just be the best value Bosch Performance CX Gen 4 equipped full suspension bike out there!

Cube have been making eMTBs longer than most companies, and they quickly adopted the 4th generation Bosch Performance CX motor, which I had ridden at the Australian launch about a year ago. I was keen to see how their long experience in the market has helped them with their current range of bikes. For our Snowies Roadie we had the 2020 Cube Stereo Hybrid 140 HPC Race 625 on test. now for obvious ease I’m just going to call it the “Stereo Hybrid 140” but I’ll get to that later.

Cube are still not that well-known here in Australia but the German mega brand is a household stalwart in it’s native country and indeed most of Europe. With a model list that falls to the floor, and more than half of them sporting a Bosch eMTB motor of some sort, Cube are one of the largest producers of eMTBs in the world. Yes it helps that Europe is the heart of the eMTB user marketplace and demand for eMTBs has been through the roof there for several years now. It has let them refine their pedal assist models to such a degree that if you’re looking for a pedal assist bike, Cube will undoubtedly have one that meets your needs.

The massive caveat here is that most of the range don’t make it to our Australian shores and our comparatively small eMTB market place. With 99 Bikes being the only supplier, at least we can be satisfied in the knowledge that the models that do make it are often seen as the best value for money options. Which brings us to the Cube Stereo Hybrid 140. Initial impressions are quite good for their Stereo 140, at $6999 or $6299 if you buy the $5.00 99 bikes membership before you purchase. This puts it in a fairly competitive position from the get go.

Easily the standout feature is the hefty carbon mainframe and it’s Bosch Performance CX Gen 4 motor with integrated 625 WH power tube battery. Making it easily the cheapest eMTB with the new upgraded Bosch motor and super sized battery available in the country. This bike had the updated software for the Bosch motor, giving 85Nm of torque and an Extended Boost mode, to really help you get through technical sections of trail. The eMTB mode in general is more sensitive, helping you get the most out of the pedal-assistance on difficult terrain. Given the Cube Stero Hybrid 140 hits the market at $6999 with a carbon mainframe, the latest motor from Bosch and big battery power, the spec sheet has a little to be desired. This is not necessarily a bad thing, parts can be upgraded more easily than an eMTB motor, and the simpler group set parts are the reason Cube and 99 Bikes can get it to you at such a competitive price.

The bike comes specced with Cube branded rims, dropper post, stem, bars and the cheaper Schwalbe tyres. The drivetrain and braking is a mixture of SRAM and Shimano with SRAM’s NX Eagle on shifting duties and Shimano’s low end 4 pot brake the MT-420 on the stoppers. 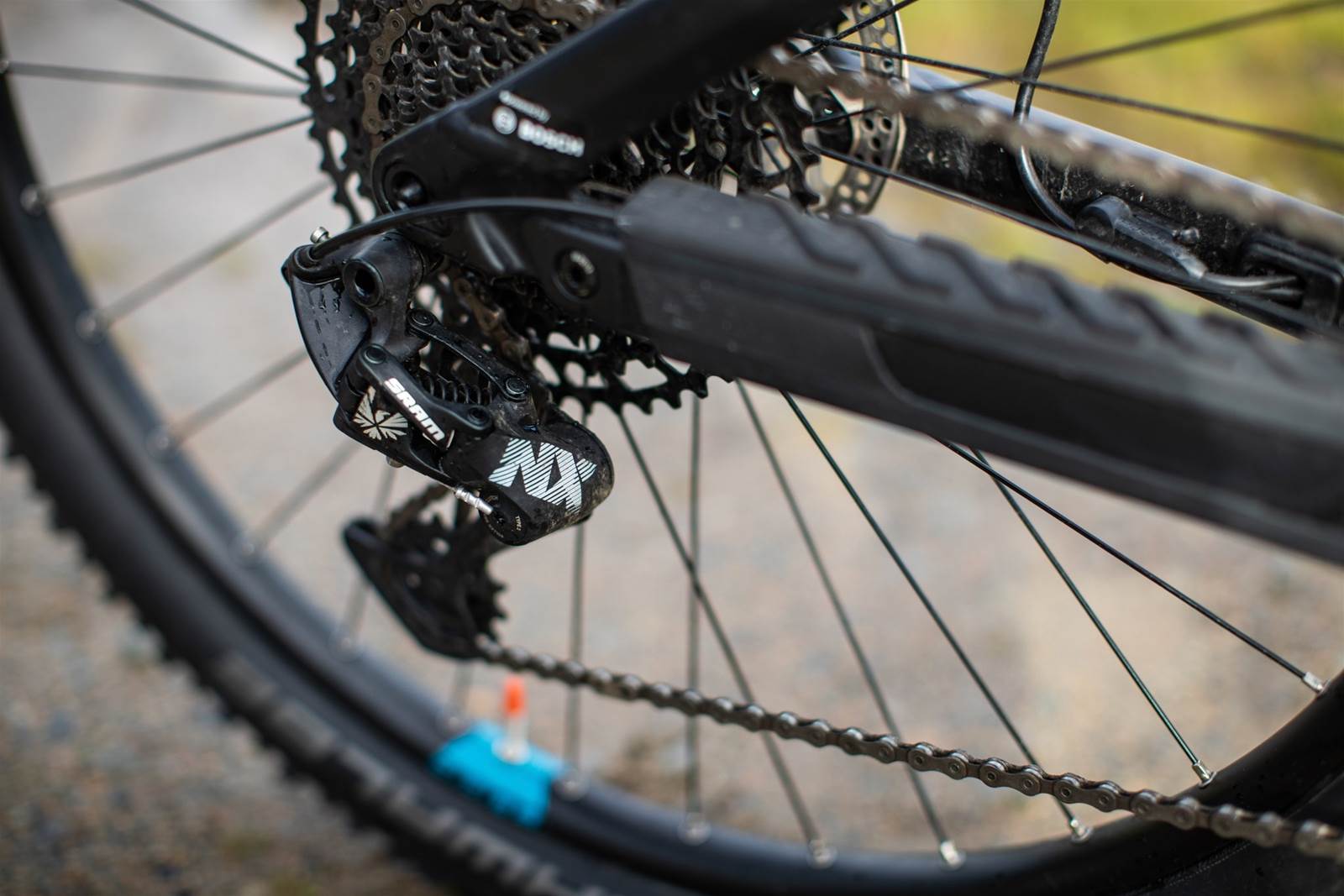 RockShox have the suspension sorted with the 35 Gold fork, and a Deluxe rear shock. Sitting at 140mm of travel in the front and rear, the entry level 35mm legged fork offers little in adjustments. Meaning there is no easy answer to lengthening travel of the fork, or updating the damper if you so desired to push the Stereo 140’s limits. The motor interface is taken care of with the snazzy Kiox display computer, so it certainly looks the part. With the main frame looking quite burly and the intermediate parts list, it puts this Stereo 140 at a not so light 23.7kg. In saying that, the new Bosch motor and firmware upgrades make it a powerful beast where weight can mostly soon be forgotten. On the trail the increased torque is the most notable benefit from the new firmware. It makes climbing a breeze, with even the steepest pinches tackled easily. The eMTB mode is the real winner here, just keep the pedals spinning and the motor does the heavy lifting. This mode helps you get the most out of the battery life, giving the support you need when required, and dialling it back when you don't. It also feels the most natural, as it reacts to your pedalling input.

The Kiox display is a multifunctional computer, which also serves as the display panel for all things speed and battery related, and even a power meter so you can get an idea of how much work you're doing, along with the bike. It is a little worrying that the computer is relatively easy to knock off its mount. The bike is not supposed to work without it as a security function so I was paranoid about it falling off on the bike rack – but it never happened. The 625Wh power tube battery seemed almost endless, and I didn't even come  close to emptying a charhge on even our largest of days on the trails on our Snowies Roadie.  For me this was one of the biggest selling points of the Stereo Hybrid 140 and a long lasting battery would be one of the first things I looked for when purchasing my own eMTB. The ease of battery removal was a bonus and would make packing an extra battery ideal for a massive epic. Modern eMTBs are really opening up options for big rides into wild areas, so long battery life and easy battery swap out are things to look for if you've got a sense of adventure. And the Cube Stereo Hybrid ticks those boxes.

The carbon mainframe has that typical carbon feel, it’s stiff and solid and looks the goods, but there is unlikely to be a massive weight difference over an alloy mainframe, but I suspect it is stiffer, assisting with the bike's handling. There were a few little things that bugged me, like the rear speed sensor. With a magnet on the wheel it’s very open to moving and not being able to read correctly. An integrated sensor would have been so much cleaner. I did love the clean looking cable ports which looked relatively easy to work on. The charge port door was a little flimsy and can easily fall off though and a more secure solution would have been a plus. These aren’t game changers but they are small things other brands are picking up on and making really refined. The 29 inch wheels front and back was also a massive plus for me. I would not consider anything else these days as the new school of 29er trail geometry is pretty spot on. The Cube has a relatively slack head angle for a 140mm travel bike at 66 degrees, the chain stay’s were a little longer than most of the others brands at 457mm thanks to the larger wheels. However they are much shorter than the previous Stereo Hybrid 140 thanks to the much smaller Bosch Gen 4 motor. Add the 29er wheels, capable geometry and the Bosch Gen 4 motor together and it really makes for a great all purpose trail bike. I wouldn’t class it and a descending weapon, the parts spec and cheaper suspension hold that back the most. When pushing the bike hard on steep and rocky terrain, or on runs at Thredbo, it was easy for the suspension to get a little out of depth.

The Cube Stereo Hybrid is a really capable trail bike that can take on just about anything you ask of it, from steep climbs to technical singletrack. The 4 bar linkage suspension design is quite progressive, feeling very plush initially then ramping up for the bigger hits. It’s a tried and tested design and is almost the gold standard with many companies utilising a similar system. The progressive nature of the design is a bonus for an eMTB as with the extra weight on compressions, it helps ensure you're not blowing through most of the travel, instead offering good support in the midstroke. It’s not the most zippy in the corners but does well enough. The suspension components worked well, but I would have loved a rear shock with a reservoir for the longer descents so the damping was more effective when it heated up.

Wheels are easily the weakest link for eMTB, as they take a pounding on heavier bikes. I had a few issues with the Cube branded Alex rims whilst on test. They were supposed to be tubeless ready but I couldn’t get them to seal up. Potentially a better rim strip or tape and some stronger side wall tyres, other than the OEM Schwalbes that come on it would help this situation. Beefier tyres would have been one of my first upgrades, as they provide much better security and grip. I can never talk enough about the importance of this and the detrimental effect it can have on your ride experience if it is not sorted.

The Cube Stereo Hybrid 140 took on everything I asked of it. It’s a clean looking bike with one of the best motors, software and battery packages currently available. The carbon mainframe sets it apart from its competitors at the $6999 price point, and is a clear point of difference. This bike is more capable then I was expecting from the spec sheet, and 140mm is a great mid point for those unsure on travel. You won't be dragging around too much bike on the majority of trails we have in Australia, and I was still comfortable enough using the Cube at Thredbo – one of the biggest hills in the country. If you're a capable rider and want to push the bike, the spec list will leave you wanting more. However with a 12-speed group set and 4-pot brakes it is still more than capable for those just wanting to ride trails and pick their way through the tech stuff. Where the Cube Stereo Hybrid really shines is how it suits someone  wanting to get on board with the Bosch Gen 4 system and upgrade some of the parts in time if needed. The new 2021 model will be available early next year and will see a colour change along with a few small parts differences, but will mostly stay the same including the impressive price tag. The Cube Stereo Hybrid 140 is certainly worth considering and should be on everyone's research list if you're in the market for a new eMTB.