Canyon are a brand that’s continually expanding in the Australian market, and this expansion continues with their launch of a full eMTB range. The Spectral:ON CF 8.0 sits in the middle of Canyon’s full suspension eMTBs. Featuring 150mm of travel front and rear, the Spectral:ON is neatly sandwiched between the 130/130mm Neuron:ON, and 180/175mm Torque:ON. As such, the Spectral:ON is aimed at the jack of all trades category, straddling the line between technical terrain performance and more general trail riding.

This eMTB category is a hotly contested one, featuring bikes such as the Specialized Levo (160/150mm), Trek’s Rail (160/150mm), Merida’s eOne Sixty (160/150mm), and the Scott Genius eRIDE (160/150mm). As the Spectral features both less fork travel and less aggressive geometry than these four bikes, I was keen to see how it performed, particularly in rougher and steeper terrain.

All Spectral:ON CFs mate a carbon front triangle with an alloy rear end. The bike’s aesthetic is clean, and in line with the trend of eMTBs becoming more refined in the visual department. This is helped by the Shimano EP8 motor, which is not only well integrated but selected by Canyon due to its overall system weight, spares availability, and display integration. I liked the Shades of Sea colour, but the CF 8.0 is also offered in a more subdued Shades of Stealth (black) paint job. Some unique features of the Spectral:ON include Canyon’s use of a ‘mullet’ 29” front wheel, 27.5” rear wheel combo. From the horse’s mouth, the reason for this is because ‘the mixed wheel size allows you to have a shorter rear centre for playful handling, while the 29er front wheel gives you stable handling and the ability to roll over anything.’ The mixed wheel size also features differing internal rim widths, with the 30mm internal width on the front rim supporting a 29 x 2.5” tyre, whilst the 35mm rear rim internal width was selected to better suit the 27.5 x 2.6” tyre.

Building the bike up from the box was about as simple as it gets. As someone building bikes out of the box fairly regularly, this build was up there with the easiest. If you’d like to know more about how the bike arrives and the build process, check out my first look article. 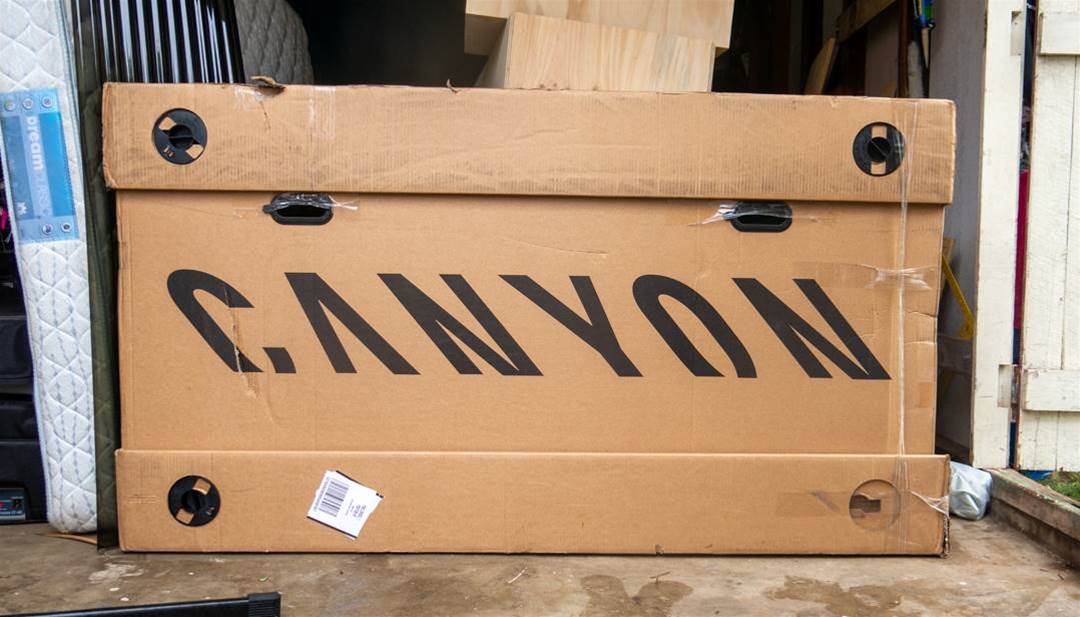 One thing to note when you purchase a Canyon eMTB is that the bike and battery ship separately. This is because the bike ships directly from Germany (at an additional cost of $199) with an approximate 2-week lead time. The battery ships from Canyon Australia’s Melbourne warehouse.

Another unique feature of the Spectral:ON’s build is the funky looking saddle. The noticeable taper at the rear of the saddle is designed to provide better support on the steeper climbs you’ll tackle on an eMTB. The cable clips and cable rub protectors on the headtube are also nice touches. Canyon deserve to be commended for speccing an almost complete Shimano Deore XT M8100 12-speed group set including brakes and rotors, which performed flawlessly throughout testing. The chain is kept in place with an integrated chainguide also. Despite my overall positive impressions, I do have some complaints about the build surrounding the tyres and dropper post. Whilst Canyon spec 3C Maxxis rubber as standard, and the DHF/DHR II combo is a classic, I don’t see why you wouldn’t spec tyres with more protective casings than EXO in the front and EXO+ in the rear. This is a discussion I’ve had with many eMTB owners with almost universal consensus that a heavier casing is necessary on an aggressive eMTB. Another complaint I have is about the battery. Whilst the battery can be taken out of the bike to be charged (which is done with a 4mm allen key), a separate Shimano adaptor is required to charge the battery off the bike. In my opinion an eMTB retailing for over $10,000 should include this adaptor.

Staying on the battery theme, higher end models in the Canyon eMTB range come with Shimano’s 4A charger, which halves the charge time from the standard charger.

Both large and XL Spectral:ONs come with 150mm dropper posts, and combined with the tall seat tube I was manually dropping my seatpost for steep descents. Whilst I would’ve appreciated a 170mm post (or even longer) on the XL model, the seatpost wedge and clamp do a great job of keeping muck out of your seat tube. The Spectral:ON immediately felt comfortable on the trail. The longish front end (485mm reach) combined with a shorter rear end (435mm chain stays) and lightweight build reminded me more of a regular enduro bike than the burly eMTBs I’ve been riding of late. With my XL bike weighing in at 23.5kg with pedals, Canyon have done a good job of keeping the weight down and making the Spectral:ON easier to manoeuvre than many eMTBS. Whilst this is something that’s enjoyable on undulating terrain, less technical terrain, and climbs, the weight saving components become apparent on rougher and more technical trails.

The ergonomics of the cockpit suited me from the off, which is lucky as the CF 8.0 model (as well as the 9.0) come with Canyon’s integrated CP12 carbon stem and bar combo. The stem length is 50mm, and the handlebar width is 780mm. The ride feel of the handlebar is nicely damped, and the display integration is also worthy of praise. The unique looking saddle was comfortable enough, and the tapered rise at the rear did the job of keeping me planted on steep climbs. With eMTBs giving riders the ability to tackle steeper climbs than you’d ride on a regular bike, I applaud Canyon for innovating in this area.

On the descents the Spectral:ON is a lively ride, and the short rear end allows you to pick the bike up easier than other eMTBs with far lengthier chain stays. The bike pumps and picks up speed well, and at the bottom of most descents I had quite the smile on my face. Whilst there are plenty of people out there for whom shorter chain stays are a plus, I felt there was a touch of front to rear imbalance with the Spectral, an issue that’s normally the opposite way around with eBikes. The two handling traits of the Spectral:ON I wasn’t enamoured with were the rear wheel breaking traction quicker than I would’ve liked, and how far over the front of the bike I felt on steeper descents. In terms of feeling more over the front compared to other 150mm eMTBs, I think the slight reduction in front travel (150mm) and steeper head angle (66.5 degrees) are contributors to this. Despite Canyon’s obvious focus on trimming weight with the Spectral:ON, I think speccing a 160mm Fox 38 or ZEB would’ve been worth the weight, as the eMTBs I’ve been riding with these beefier forks have felt noticeably more composed in the front. The slackening of the head angle would also be appreciated in steeper terrain. The short chain stays on the Spectral:ON make it the easiest eMTB I’ve ridden to manual and contribute to its fun nature. Despite this, I’d take a slightly longer chain stay (particularly on the XL model) to give the bike a better front to rear balance, and I think this would aid in rear end traction also.

Despite these criticisms, Canyon have a defence for the Spectral:ON’s preference towards more trail focussed geometry and spec, which is the inclusion of the Torque:ON in their eMTB range. The Torque:ON features 175mm of rear travel paired with a 180mm fork, and the geometry is more aggressive, although the Torque:ON features an even shorter 430mm chainstay. If you’re after an eBike that’s predominantly for gravity riding, the Torque:ON could be a better option.

In the climbing and undulating terrain departments, the Spectral:ON has the edge over other 150mm eMTBs I’ve ridden in the last year, including the Scott Genius eRIDE, Trek Rail, and Specialized Levo. If you’re the kind of rider whose local trails aren’t overly demanding, but you prefer having a slightly longer travel bike, the Spectral:ON could be a great option. In combination with the much refined Shimano EP8 Trail mode, the Spectral:ON is much more capable when it comes to any sort of technical climb, as well as tight and twisty singletrack. Shimano’s E-Tube Project app allows you to customise the EP8’s motor assistance levels to your liking. Whilst this is a great feature, I found the standard Trail mode spot on with the variable assistance required for trail riding. The standard Boost mode did the job of getting me to the trail quickly via the tarmac, whilst I reserved Eco for rides with mates on regular bikes, or longer rides. Overall, the Shimano EP8 system performed flawlessly and suited the character of the Spectral:ON.

Overall, the Spectral:ON delivers on what it promises, which is an engaging trail bike that’s fun on a variety of trails. The Spectral shines on a much broader variety of trails than other eMTBs with 150mm of rear travel, which is helped by its lightweight overall package and fun inspiring geometry. Whilst there are other eMTBs in this travel bracket that excel more in charging steeper and more technical terrain, riders looking for that style of bike also have the Torque:ON available in the Canyon range.