The Trek Rail had some hard to see but easy to feel upgrades for 2021 - and it's leading the pack!

Whilst the 2021 Trek Rail 9.8 XT retains the same carbon frame as the 2020 model we tested earlier this year, that’s where the similarities end on this big hitting eMTB. If you want to get the lowdown on what’s changed componentry wise for 2021, check out our First Look article here. Now let’s get into it!

With 160mm of front travel paired with 150mm of travel in the rear, the Rail 9.8 XT is aimed squarely at the aggressive all mountain/enduro crowd. This initial impression is bolstered by the beefy RockShox ZEB Select + fork, and we think the aesthetic of a burly fork on an aggressive eMTB like the Rail is fantastic. The aggressive intentions of the Rail are further emphasised by the stout 165mm cranks and 2.6” rubber from Bontrager in the form of their SE5 Team Issue Tyres. The Rockshox ZEB Select + fork is a perfect match for the Rail. This all-new fork’s 38mm stanchions make a noticeable difference to front end stiffness. Aboard the Rail we were never worried about the front-end deviating, even when we were giving the bike ample opportunity to do so. An example of this is when we were turning the bike across rock ledges, often while braking, and the Rail stayed on its line with no squirmy feelings being transferred to the rider.

The ZEB Select + was easy to setup using Trek’s suspension calculator, and we found the recommended settings to be just about bang on. The Select + has RockShox’s top of the line Charger 2.1 damper, but only offers low speed compression. We ended up running less LSC than recommended, as we found the fork didn’t need to be damped to hold a good ride height. Reducing the LSC kept the front end as active as the rear, which is a real highlight on this bike.

The rear shock is a custom Super Deluxe with Trek’s Thru Shaft technology (don’t worry tinkerers, you can use your own shock if you like). We set the bike up initially with 30 percent sag in the rear, middle of the road rebound, and one click of low speed compression. The shock is a joy to setup, with rebound numbered 1-10 (why doesn’t everyone do this?) and 3 low speed compression modes. In terms of volume spacers, there’s room for one spacer in the negative spring, and three in the positive. We ended up running a touch less sag (around 27 percent), but we kept our rebound exactly in the middle (5/10) and ran the compression in the middle setting for the majority of testing. The three compression settings do make a noticeable difference to the shock. Whether you’re doing laps of a jump track and want a firmer feel, or you need all the traction you can get on a steep, rooty descent, one click can make a big difference.

Drivetrain and braking duties are taken care of by Shimano. The bike comes with a full XT M8100 drivetrain, with no shortcuts taken in the chain or cassette department! The crankset is an E*thirteen eBike specific model, and we appreciated the stubby 165mm length for pedalling through Sydney’s ledgy terrain. A 34 tooth chainring paired with a 10-51 cassette meant we didn’t think twice about gearing for the duration of the test. 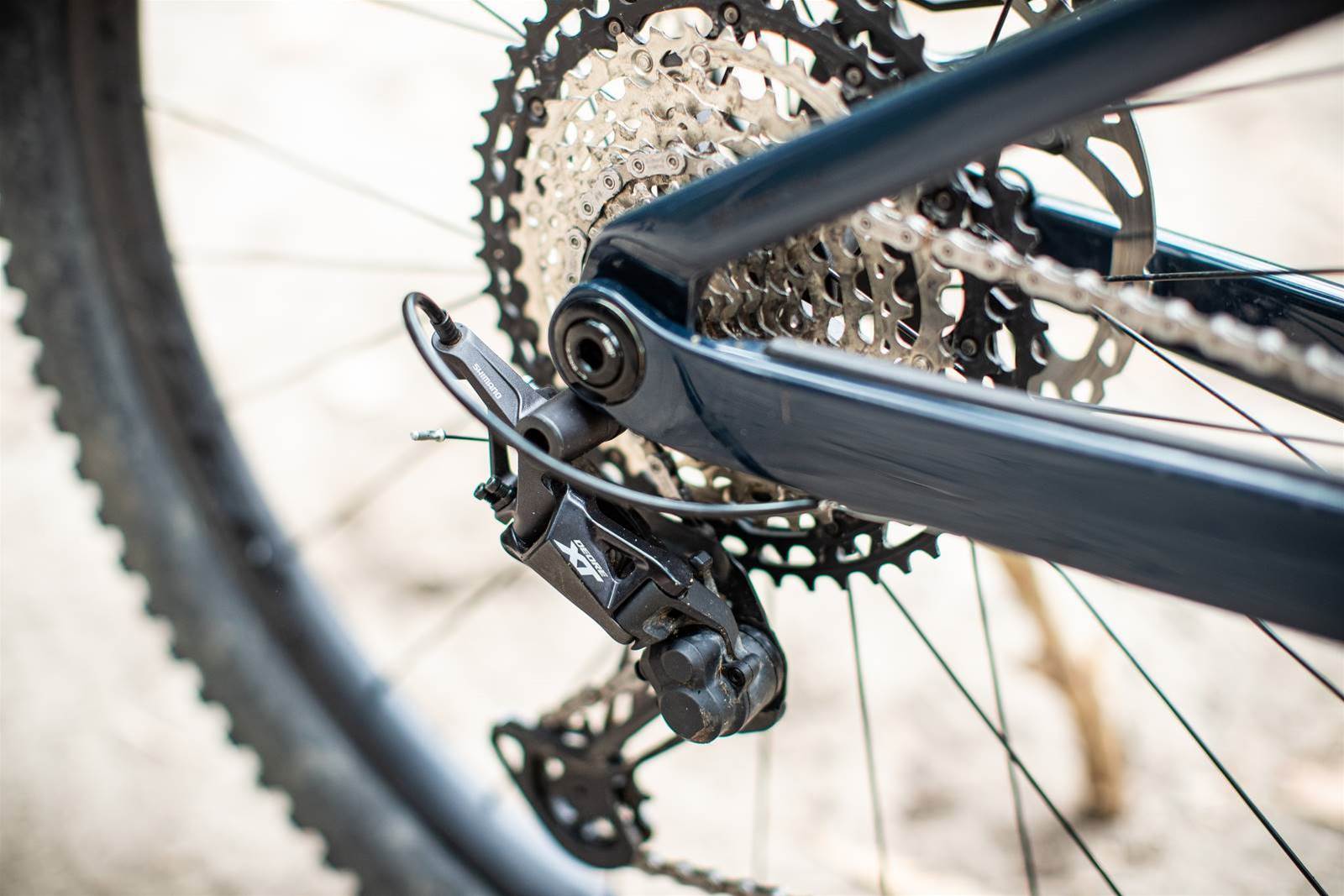 The bike comes with Shimano’s SLX M7120 4 piston brakes and 203mm rotors. With the lever reach adjustment that was previously an XT and above feature having trickled down to the SLX range, we can’t say a bad word about these brakes. The additional brace on the brake really does increase stiffness at the lever, and the power and modulation are fantastic. In the motor department, the Rail 9.8 XT comes with Bosch’s top of the line Performance Line CX Motor, powered by a 625wh battery. Whilst the hardware remains the same, the CX now has a whopping 85nm of torque, and there’s been some tweaks to the eMTB mode to deliver more natural assistance out on the trail. Bosch are calling this ‘Extended Boost’. What it does is give you a bit more oomph when you’re negotiating steeper, ledgier or more technical climbs (hello Sydney). In practice, we found that the extended boost allowed us to use half cranks to great effect on technical climbs. Sometimes on an eBike (particularly if you’re in too high a gear), a half crank won’t get enough response from the motor and you’ll come to a dead stop. With the extended boost every watt of power through the cranks is met with the motor staying on for a touch longer, helping you get up and over just about anything. The Rail 9. 8XT comes with Bosch’s Kiox display. The Kiox is a more minimalist unit than the Purion it replaces and is cleverly integrated by Trek at the front of the top tube. This positioning shields the unit with the bike’s cockpit and is easy to see when riding seated. The controller for the Kiox is also less intrusive than the Purion model. Apart from being integrated much better, the Kiox also displays power and can connect to a heart rate strap, pretty nifty features for an eBike computer. Our only gripe would be for those looking to upload their rides to Strava, you’ll have to do it on a computer through Bosch’s eBike Connect website.

Whilst the Kiox display isn’t as refined as a Garmin unit in terms of displaying custom fields, those looking for basic ride stats and who aren’t planning complex power-based workouts will be more than satisfied. There’s always the possibility of software updates down the line as well, and we’re excited to see where Bosch go with this in the future. The cost of a high end eBike could be far more appealing if you’re a rider who uses a power meter and the cost of a power meter and bike computer is taken out the equation.

Another nifty feature of the Kiox is its ‘lock’ anti-theft feature. For a one-time fee of $14 AUD, when you remove the Kiox display the motor will no longer work until that same Kiox unit is put back on the bike. Anything that deters bike thieves gets a big thumbs up from us, nice one Bosch!

All about that geometry

The Rail’s long travel is backed up with fairly aggressive geometry. Our XL test bike had a 495mm reach, 64.5-degree head angle and 35mm of Bottom Bracket drop in the low setting. The Rail features Trek’s Mino Link adjustability, which in the high setting raises the bottom bracket, lengthens the reach and steepens the head angle. Whilst we did experiment with the high setting, we preferred the Rail in its lower and slacker guise that matched the bike’s aggressive intentions. Whilst the front end of the Rail is relatively long, the 75-degree effective seattube means you don’t feel too stretched out when riding in the saddle. This being said, we wouldn’t have complained is the seattube was another degree or two steeper. On the XL model we tested we did end up sliding the saddle almost completely forward on the rails.

One area of geometry where Trek deserve praise is in the chainstay length. At 448mm in the low setting and 447mm in the high setting, this impressively short rear end for an eMTB makes the bike manoeuvrable at all speeds. We found the bike to have good front to rear balance, something some eMTBs struggle with due to their bloated rear ends. Out on the trail, the Rail felt comfortable almost straight away. The reach is on the longer side, but it didn’t feel too long either seated or standing for our 185cm tall tester. As we mentioned earlier, both the front and rear suspension really suit the Rail’s aggressive intentions and encourage you to push hard. This was a recurring theme we noticed with the Rail, the harder you push it on both the ups and downs, the better the bike performs. On the descents, the Rail holds a line fantastically. The combined stiffness of the ZEB and chunky ‘Straight Shot’ downtube mean you can plough through just about anything. The only time we noticed the front end of the bike being a touch too lengthy was as we fatigued over the course of a long downhill and gravitated towards the rear of the bike. As we’ve said, the Rail wants you to be an involved and committed pilot. Anytime you’re not giving the bike the input it needs it can get away from you a touch. Perhaps this is more a reflection of the tester’s physical condition than the Rail’s performance, but on an eMTB you’ll be doing more descending than you would on a regular bike, so it’s worth considering. In the turns the shorter rear end of the Rail was noticeable. The shorter chainstays also allow you to lift the front wheel on the Rail with more ease than other eBikes on the market, making a more dynamic riding style possible. In the past on eBikes with longer rear ends we’ve succumbed to keeping the bike grounded and ploughing through everything in our way. The Rail, however, is nimble enough to be bunny hopped onto the high line or picked up and pushed into a transition to generate speed. In flatter terrain the Rail links together turns nicely, and the bike feels well balanced front to rear both seated and standing. This being said, the recurring theme of needing to be pushed came to the fore, as if you sit up and relax aboard the Rail the handling can feel vague. Whilst we didn’t have any complaints riding the bike on flatter trails or undulating terrain, we would put the Rail in the category of craving the descents rather than being more of an all-round trail bike. We’d love for Trek to come out with an even longer travel version of the Rail, to further capitalise on this bike’s descending prowess. On the climbs, the eMTB mode, extra torque and ‘Extended Boost’ were a joy. On the technical climbs, we found that riding in a lower gear with a higher cadence was the way to go. With the extra torque and the kick of the extended boost, we found that stabby half cranks were met with enough power to get you up some tricky climbs that might not be possible on a regular bike.

The Trek Rail 9.8 XT is a great option for a rider looking for a burly eMTB that excels in a variety of situations, but definitely favours descending. The additions to the 2021 model of the upgraded suspension, motor updates, Kiox display and Shimano drivetrain have a big impact on the way the bike performs, and the changes get a big thumbs up from us. If the $11799 asking price is too high, and it is a heck of a lot of money, the Rail also comes in two aluminium variants with the same geometry, priced at $10499 and $8999. The product development of eMTBs is moving ahead in leaps and bounds at the moment, but we feel that the Trek Rail really is at the front of the pack for all-mountain eMTBs right now, with matched 29er wheels, long battery life, high torque, on point geometry and a parts kit that is designed to excel for eMTB use.

Drop in to your local Trek dealer to ask about availability and get more details.