The Trek Rail 9.8 is the perfect combination of suspension and pedal-assist.

Trek have always been one of the biggest brands in the cycling industry, their history, quality and range have always made them one of the greats. Whilst Trek have been producing eMTBs for a few years now, they had failed to really deliver a real MTB version that could compete in popularity with the likes of some of the other larger brands like Specialized and Merida. In choosing to run the reliable yet very large Gen 3 Bosch Performance Line CX motors on the older Powerfly LT, the geometry and handling has always been compromised. This really seemed to affect their popularity, at least here in Australia. Finally, this is all about to change. Bosch have just released their brand-new Gen 4 motor and it’s got some massive improvements. Trek are one of the first production companies to adopt the new motor with their completely new Trek Rail eMTB. The Rail is a 29” wheeled, 150mm travel electrified trail bike. This coming of age moment for Trek’s eMTB department has really put them into the game proper with a quality looking offering that’s going to exceed expectations.

STOP! We've also tested the 2021 edition with more power and beefed up suspension - check it out here.

Initial Impressions of the Trek Rail

It’s pretty easy to say the new Trek Rail looks the business when you have the Rail 9.8 sitting in front of you. Dripping in all the bombproof Bontrager and quality SRAM and RockShox componentry, the bike looks like it is set to rip. The simple fact it’s red and has bold new graphics was not lost on me either. Compared to the old Powerfly LT it really looked like a bike I wanted to ride. The new Bosch Gen 4 Performance Line CX motor is tiny in comparison to the old Gen 3, and now runs a regular chainring instead of the smaller one of Bosch motors past. Integration has also taken a step forward for Trek and Bosch, with a speed sensor mounted on the rotor and the downtube Removable Integrated Battery (RIB) storage looking extremely neat and tidy. The 625Wh Battery is a solid power storage device, upping it from the older standard of 500Wh. If for some crazy adventure ride reason you’d like to carry an additional battery, you’ll also need a second Battery cover as it forms part of the frames structure and is mounted on the battery. Trail side swapping of this is not ideal, with removal of some small screws and springs required. Needless to say, the ability to run an auxiliary battery for longer rides would have been amazing. This is something Norco, Focus and Specialized are offering on select models. 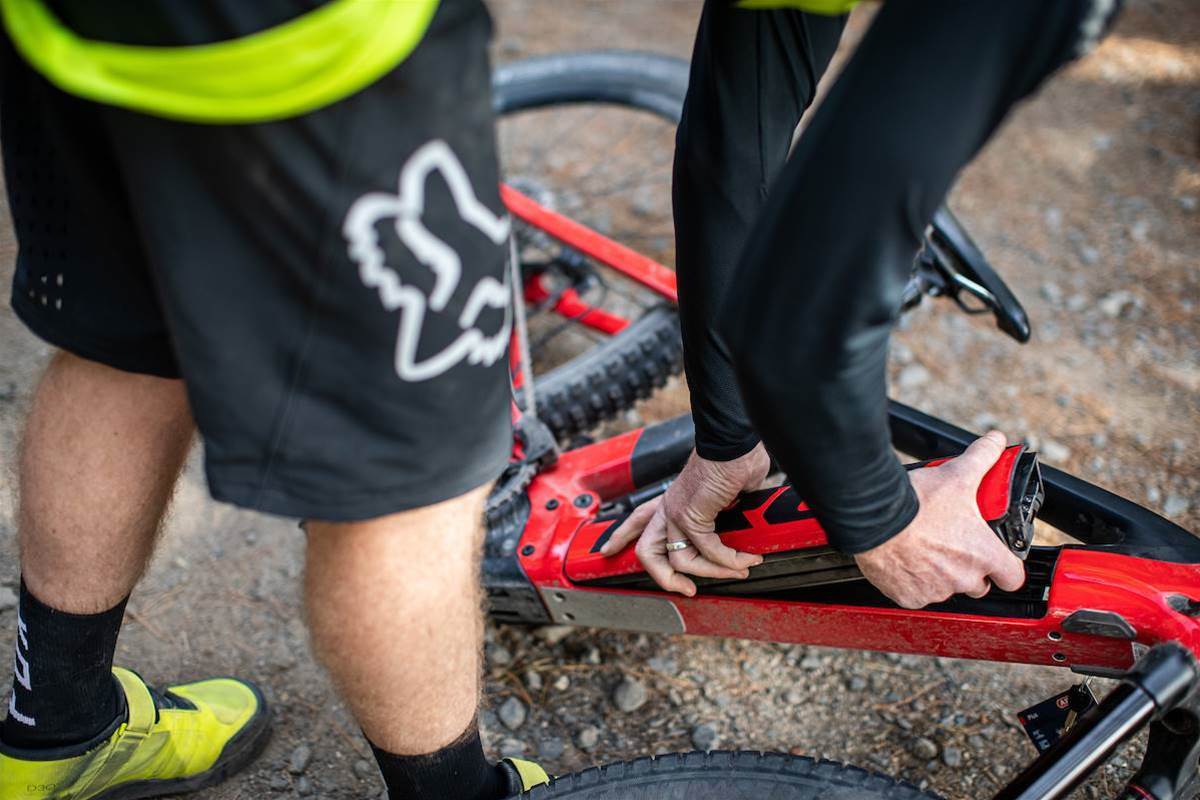 The Trek Rail has many of Trek's usual frame specifications, including the MinoLink to adjust the frame geometry, the Knock Block to prevent the bars swinging into the frame, and of course silent internal cable routing.

The Trek Rail 9.8 comes specced with bombproof SRAM componentry, a combination of a GX Eagle drive train and X1 cranks. Most eMTBs are notoriously hard on gear and this level specification means it’s cheaper to replace like for like when the time comes, and it’s built to take abuse. To this end, Trek use the single click SRAM GX shifter, so you can't shred chains and cassettes so easily when shifting under the loads that an eMTB produces. Trek also went for reliability with their braking duties, relying on the Shimano SLX 4 pot brakes for the added stopping power that an eMTB needs. The Bontrager Line Comp 30 wheels look the business in brushed aluminum, convincing even the most exuberant carbon snob you know. With eMTB specific Lyrics up front and a Deluxe RT3 RE:aktiv w/Thru Shaft out the back, RockShox have all your suspension needs covered. For data purposes Trek still have the old, large Bosch Purion display, but Bosch do have some other more integrated options available. None are as small and tidy as what Specialized or Shimano have offered, but they are simple to use and easy to read on the trail. Despite this, it’s all very impressive and to say you pretty quickly know if an eMTB will be good or not would not be a lie. But I had a feeling the new Trek Rail 9.8 was going to be a real contender with the best in the eMTB sector, and that’s really saying something Trek and Bosch have never really been able to do before.

Easily the first thing you’re going to notice riding the Trek Rail 9.8 out of the car park for the first time is the way the new Bosch motor behaves. It’s certainly much quieter than the old Bosch motors, and the feel is great. Everyone’s sensible favorite setting, the EMTB mode is popular with industry folk for a reason. It’s got the best feel and automatic power implementation of all the variable modes different brands are doing. Basically, when you go hard the motor goes hard, when you sit back and take it easy the motor sits back and takes it easy. It’s a great way to get a faster yet more natural feeling ride. It was great to see they had improved here on an already great feature. Climbing out of the carpark was quite literally a breeze that got my heart racing.

The new carbon frame is also a great improvement, the rigidity and light weight feel is instantly noticeable. The Rail took all its design cues from Trek’s popular bad ass Slash 29er Enduro bike the. So it’s no surprise descending on the Rail is where you’d expect it to excel and it does. Depending on how you set the MinoLink, you have about a 65 degree head angle, 75 degree seat angle and 450mm reach on the medium I tested

The Rail does have one of the shortest chain stays of a lot of eMTBs at 447mm on a medium, but it still has a slightly longer chain stay and wheelbase than the Slash - obviously due to fitting the motor in. Combined with the extra weight from the eMTB system, the Rail has a planted feel which gives you a tonne of confidence at speed through the rough stuff, but also still retains a lot of its playfulness and agility by minimising that length. It really is a great middle ground suited to the majority of eMTB users and the way they will use their shred sleds. 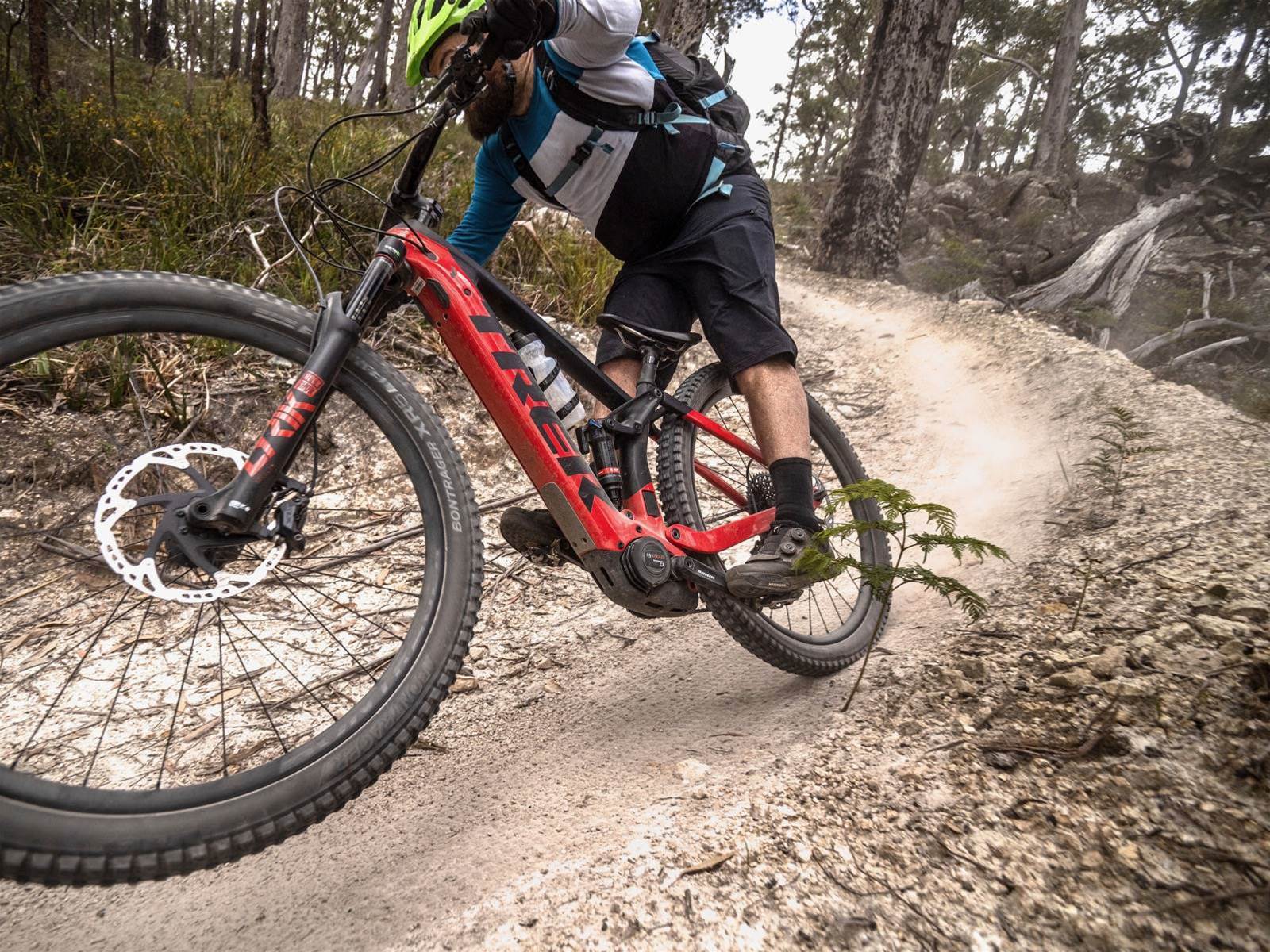 Trek’s well-regarded ABP (anti-brake pivot) suspension design found on all Trek’s full suspension bikes is therefore also found on the Rail. With the heavy braking forces required for descending and therefore slowing down a heavy eMTB, it’s a great part of what makes the Rail so enjoyable, fast and somewhat safer to ride. With more traction in those amazing “oh shit” moments you so often find yourself in when riding a playful and fast eMTB, suspension that keeps your rear wheel planted under heavy braking is a godsend.

Thankfully most eMTB manufacturers have started looking at other wheel and tyre combinations other than 27 Plus. Some brands are implementing the “mullet” combo, with 27.5”+ at the back and 29” up front. It’s not a bad compromise when 2 years ago you developed your frame for 27.5” wheels and don’t want to do a re-design or buy more moulds. I’ve always been a fan of 29” wheels and so I’m pleased to say Trek fully adopted their thinking behind the Slash being 29” only and brought it to its powered cousin the Rail. With front and rear 29” wheels, You have better tyre choice and therefore security. Having a 27.5 Plus tyre on the rear you have oodles of traction but it’s no good when you keep ripping the tyre off the rim. Running heavier casing 29” DH tyres, I feel will reduce this occurrence whilst also giving you all the same traction benefits and adding to that hole filling and roll over ability. 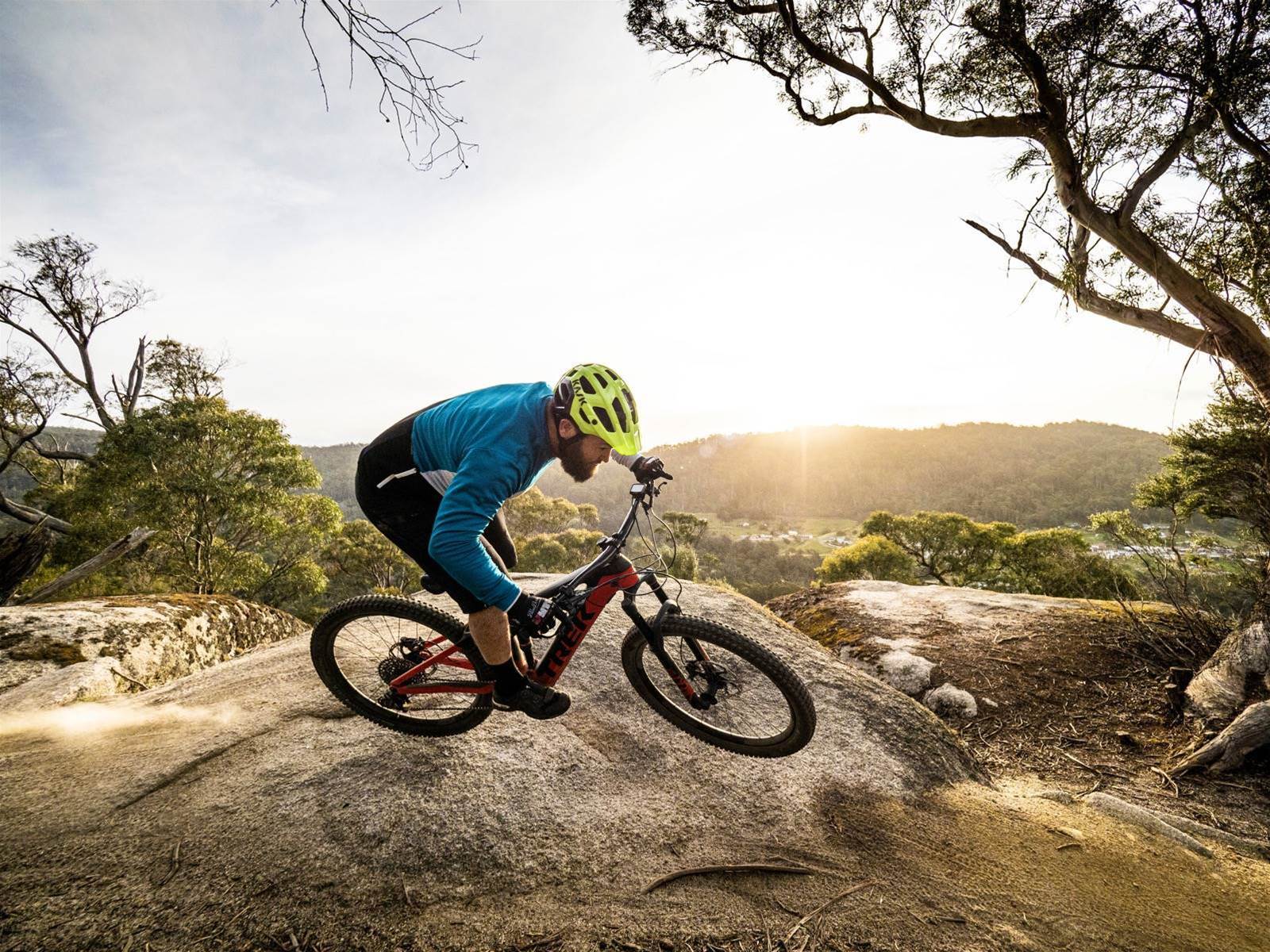 The SRAM, RockShox and Bontrager products performed flawlessly and there is no real reason not to expect the best from these guys. New bikes drivetrain always feels good, but when things aren’t working properly on an eMTB you're always going to find out pretty fast.

The Trek Rail 9.8 is clearly a quality bike, it’s really going to put Trek on the eMTB aficionado’s radar, where Trek might not have been in previous years. The new Bosch motor now easily holds it’s own in comparison to Shimano and Specialized’s Brose motor. It’s a viable option which is now worthy of consideration. The battle for  eMTB supremacy is now in full swing, and for a lot of people with these expensive bikes price point is going to hard fought. At $11,799 for the 9.8 model, what would have been considered ludicrous only 2 years ago is now considered acceptable and this price range is a market that is hotly contested. There are two cheaper models that share the same ride characteristics but with different materials and parts spec. With top eMTBs from all the major players sitting at around $10k or more, it’s going to be a game of what is most important to you. Do you need carbon? Are components more important? Are Newton metres of torque and battery life more important than life itself? Or is weight and real bike feel way higher on your list? Regardless of any of these questions the Trek Rail is worth consideration. It’s the right balance of quality, brand name security, price and ride features. Did we also say it’s fast and comes in red? 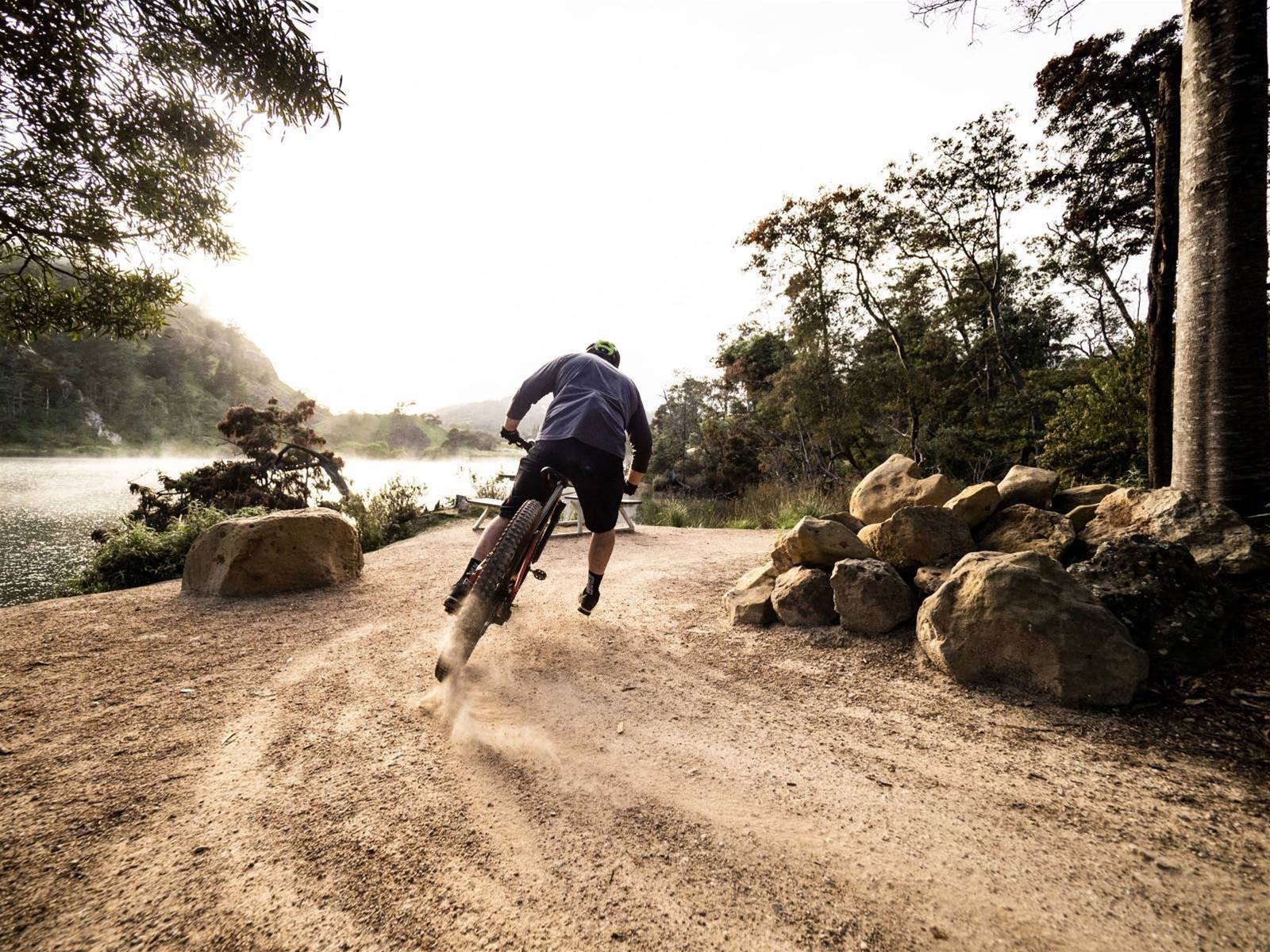 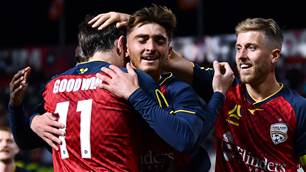