New for 2022, Trek have released Carbon Rail 9.8 XT and 9.9 XTR eMTB models using Bosch’s newest Smart System components. These new models also feature updated frame design, geometry, and brand-new componentry. The Rail 5, 7, and 9 models will remain the same as the Rail we tested last year (using a 625wh PowerTube and the current Rail Geometry). The travel will also remain the same as the current Rail models (160mm front travel paired with 150mm in the rear). 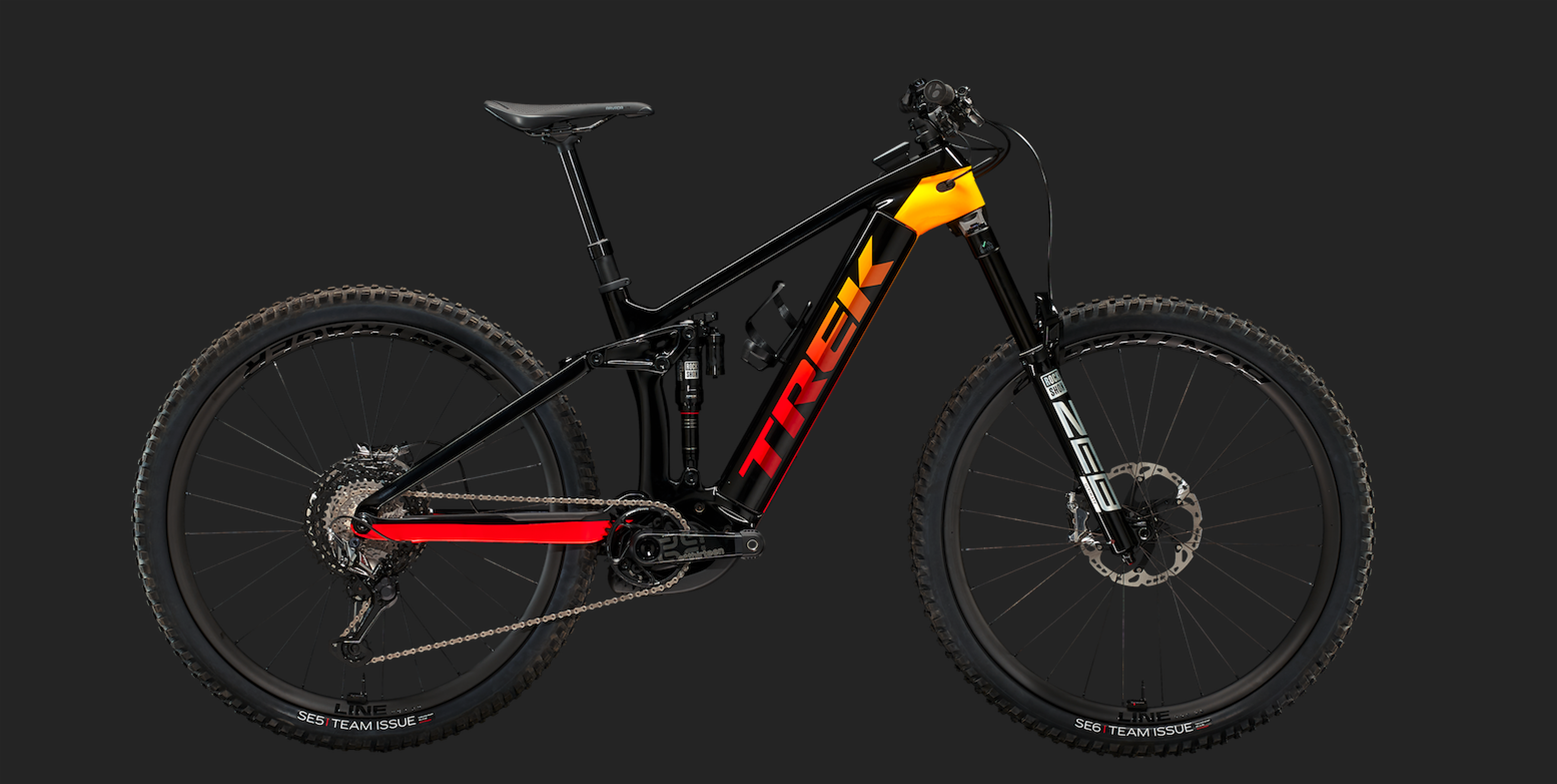 The Rail 9.8 and 9.9 both have lengthened reaches (a whopping 520mm on XL models, and 19mm longer on average in each size) and a slacker 64.5-degree head angle. They’ve moved to the 1.8” headtube standard, which makes sense when you consider the forces being transferred to the front end of an aggressive eMTB with a long travel single crown fork.

Trek have taken inspiration from the Slash in the geometry of the new Rail models.

In terms of size specificity, the small size bikes have a slightly curved top tube, as well as a 625wh battery as Trek couldn’t fit a 750wh battery and keep the reach in the right areas for a size small. This is a trend I think we’ll see across all Smart System eMTBs (long reaches and potential compromises in smaller sizes), as the PowerTube 750wh is quite long and forces brands to lengthen their reach whether they want to or not. One area of Bosch's Smart System that hasn't changed is the Performance Line CX Motor.

Another small but interesting detail on the new Rail 9.8 XT and 9.9 XTR is the removal of the kickstand mounts on the rear chainstay, something that featured on the old Rail. Scoff all you like, but there’s a reason lots of long travel eMTBs come with kickstand mounts, and it’s because there’s sufficient consumer demand. It’ll be interesting to see if Trek are ahead of the curve in removing kickstand mounts with the increasing amount of current riders adding an eMTB to their fleet.

After eMTB reviews? See below for some eMTB's we've reviewed recently:

Another on trend geometry change is the move from a 75-degree effective seattube angle to 77-degrees, something that makes sense on an eMTB capable of getting up very steep climbs. It’s worth noting with the geometry of the new Rail that the bike will ship in the low Mino-Link position, and the high position alters the geometry in multiple areas.

Chainstay length remains the same on all sizes (446.7mm – 448mm), which has the biggest impact at either end of the size range, but differing chainstay lengths are difficult to achieve on an eMTB due to the added design complexity of a mid-drive motor. 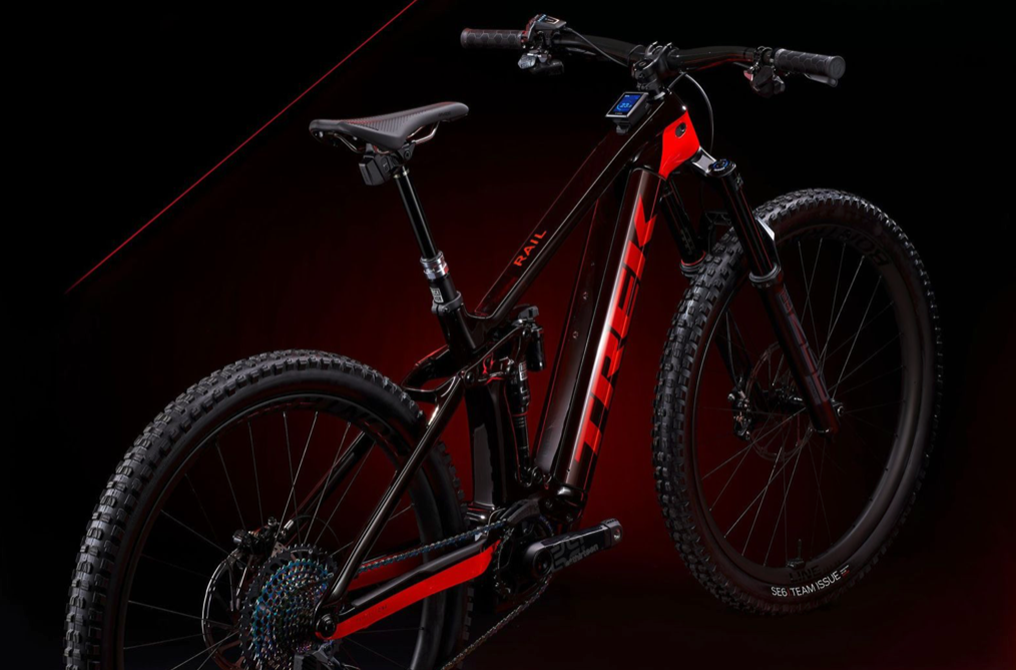 The new Rail 9.8 XT and 9.9 XTR models come with 160mm RockShox ZEB Ultimate forks paired with 150mm Thru Shaft Super Deluxe Shocks. There are no complaints from me on this front, as the Thru Shaft Super Deluxe is one of the supplest off the top shocks I’ve ever ridden. You can bump the fork up to 170mm, but this is the maximum length Trek approve. 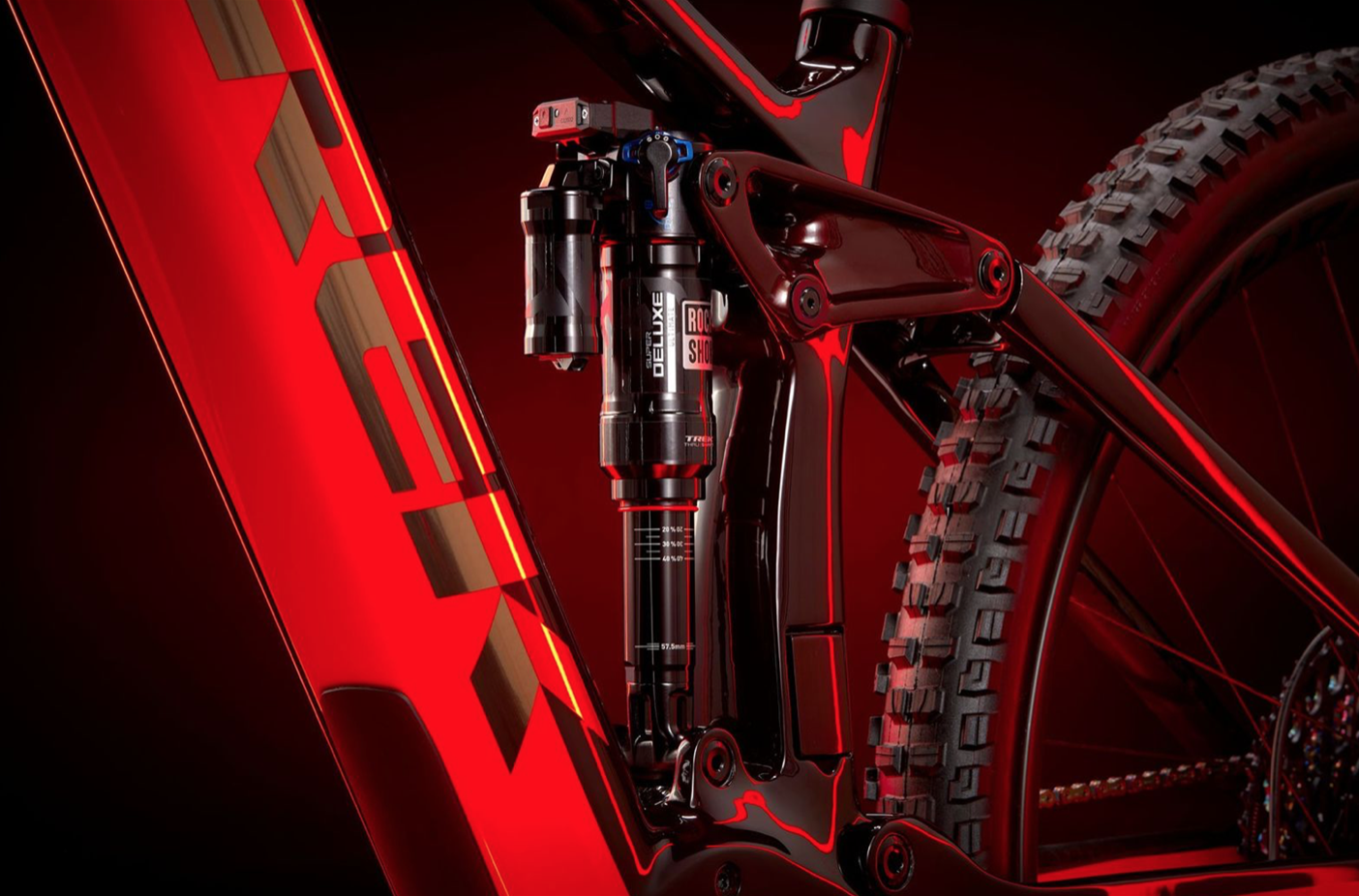 Trek and RockShox's Thru Shaft Super Deluxe Shock is fantastic.

We’ve covered Bosch’s Smart System in depth here, but the key features are a new 750wh battery, new LED Remote, and the Kiox 300 display. Whilst I personally like the idea of running the remote sans display (as it tells you all the information you need such as remaining battery and what mode you’re in), Trek’s integration of the Kiox display is fantastic. 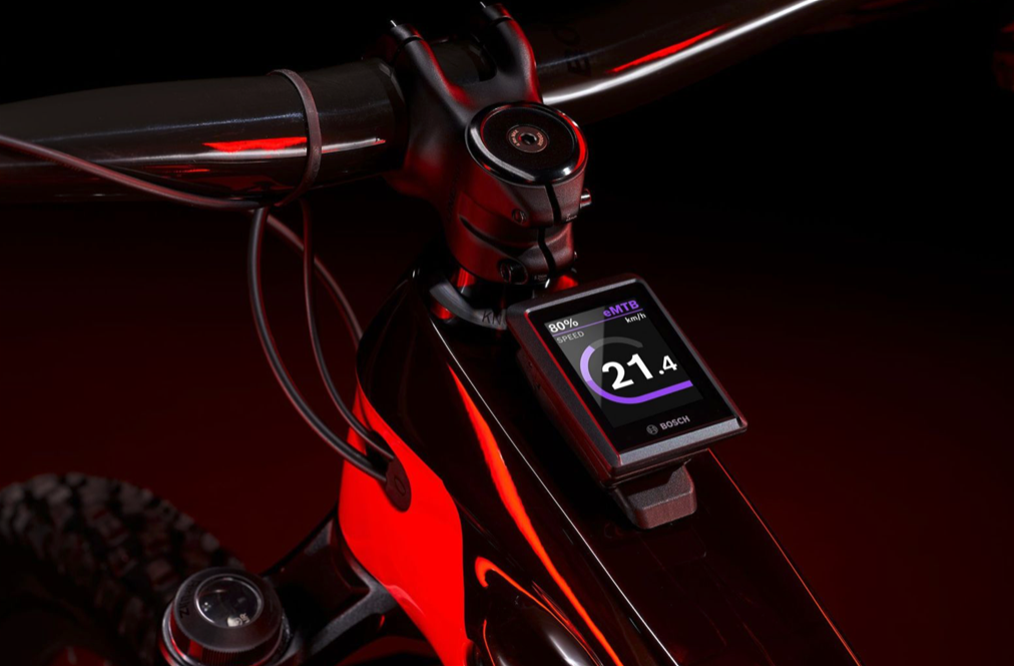 Trek's Kiox 300 integration is fantastic, and remains the same as their regular Kiox integration on the current Rail.

Due to the mounting of the Kiox display behind the cockpit on the top tube, it’s easily visible but also quite well protected. To add to this protection the new Rail models use Knock Block 2.0, which gives you 72 degrees of movement as opposed to 58 degrees.

As we mentioned in our Smart System article, the eBike Flow App will be tailored to the brand and model of bike you own, so software updates are performed wirelessly, and you can also tinker with the motor assistance like you can with Shimano and Specialized Motors.

In the presentation for these new models, Trek identified that riders want more range from their long travel eMTBs, and that’s why they’ve gone down the Smart System 750wh battery path. I think we’re now at a bit of a crossroads where we’ll see this camp of eBike with all the battery and all the power, and there will be the in the middle market (between a ‘regular’ bike and eMTBs like the Rail) of lighter, less powerful but more agile eMTBs such as Specialized’s SL range.

New for not only the 9.9 XTR model but Trek and RockShox is the Quarq AirWiz suspension. AirWiz is like Quarq’s TyreWiz, in that it’s a traffic light system that lets you know if your suspension is setup correctly prior to a ride (more specifically your suspension’s spring rate/air pressure). A flashing green light means the pressure is within the parameters set in your SRAM AXS app, whilst red means it’s time to reach for the shock pump. The AirWiz unit is mounted on the air spring side of the fork, and the top of the shock. 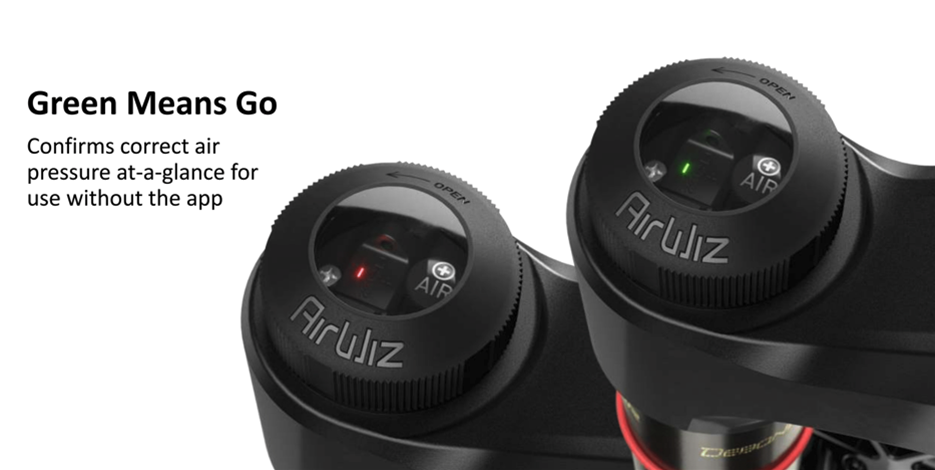 The AirWiz is a new product from SRAM subsidiary Quarq.

If you’re wanting to get the 9.8 model but also want your suspension to have flashing lights, you can upgrade to AirWiz suspension through Trek’s Project One program. 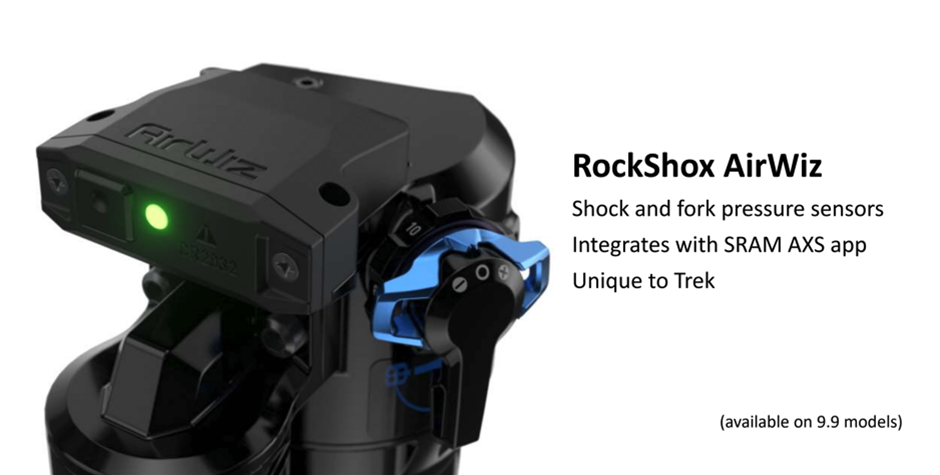 The AirWiz is mounted to the top of the Thru Shaft Super Deluxe, which is a fantastic shock.

You certainly can’t complain about a lack of electronics on the new Rail 9.9 XTR. Using the SRAM AXS app you can set your desired tyre pressure, and then a green light on the Quarq TyreWiz will let you know if you’re ready to roll before each ride, much the same as the AirWiz. Trek have worked with Quarq to integrate the TyreWiz specifically to the Bontrager Line Pro 30 Wheels specced on the 9.9 XTR. Once again if you’re after a 9.8 but can’t imagine riding without TyreWiz giving you a pre ride thumbs up, Project One makes upgrading a simple task.

The TyreWiz will come front and rear in the 9.9 XTR model.

Can I run a mullet setup?

The maximum tyre clearance on the new 9.8 XT and 9.9 XTR models is 2.6”, which is turning into a real sweetspot for longer travel eMTBs. The 170mm maximum fork length does surprise me a touch, as I could see some riders wanting to run a 180mm fork in some instances.

In another spec choice that isn’t a big deal but is a bit of a head scratcher, Trek have opted for a 180mm direct mount rear brake. I think 200mm (or 203mm if you’re speccing Shimano) should be the norm front and rear, if not the 220mm rotors we’re seeing some brands adopt on their long travel eMTBs.

If you’re interested in a new or existing Rail, it’s worth visiting your local Trek dealer as stock is limited as usual in these crazy times!