Hunt's E_Enduro wheelset is a highly affordable eMTB wheelset, but how do they perform on the trail?

If you read my first look article on the Hunt E_Enduro E-MTB Wheelset online, you might’ve picked up that I was excited by them. As someone who’s ridden eMTBs for a few years now, perhaps my number one frustration has been sub-par wheels and tyres that are often specced, and often get in the way of a good bike ride!

For those who haven’t heard of Hunt, or the E_Enduro Wide E-MTB Wheelset (let’s just go with E_Enduros), I’ll get you up to speed quickly. Hunt are one of the brands under The Rider Firm umbrella, who also own the reliability focussed Privateer Bikes. They’re becoming popular here in Australia, a result of their competitively priced wheels that offer a genuine upgrade from many OEM options. Hunt are part of The Rider Firm, who also make Privateer Bikes.

What’s in the box?

As Hunt are a direct-to-consumer brand, you’ll need to add shipping to the cost of your wheels. The wheels come neatly packed, have tubeless tape pre-installed, and they also ship with an extra tubeless valve, two drive and non-drive spare spokes and nipples, and two individual build cards letting you know who built your wheels. In my case it was A-Voc and Victor. Thanks for the good times!

The E_Enduros are aimed at the eMTB market, with a focus on reliability and durability. The rims feature an internal width of 37mm, which work perfectly with what’s becoming the eMTB sweetspot of 2.4” - 2.6” tyres. I rode the wheels with tyres ranging from 2.35” (Schwalbe Hans Dampf) to 2.6” (Pirelli’s eMTB Soft), and the tyre profile was bang on. I probably wouldn’t go skinner than a 2.35”, but if that’s the tyre size you want to use than the E_Enduros probably aren’t the right wheels for you. 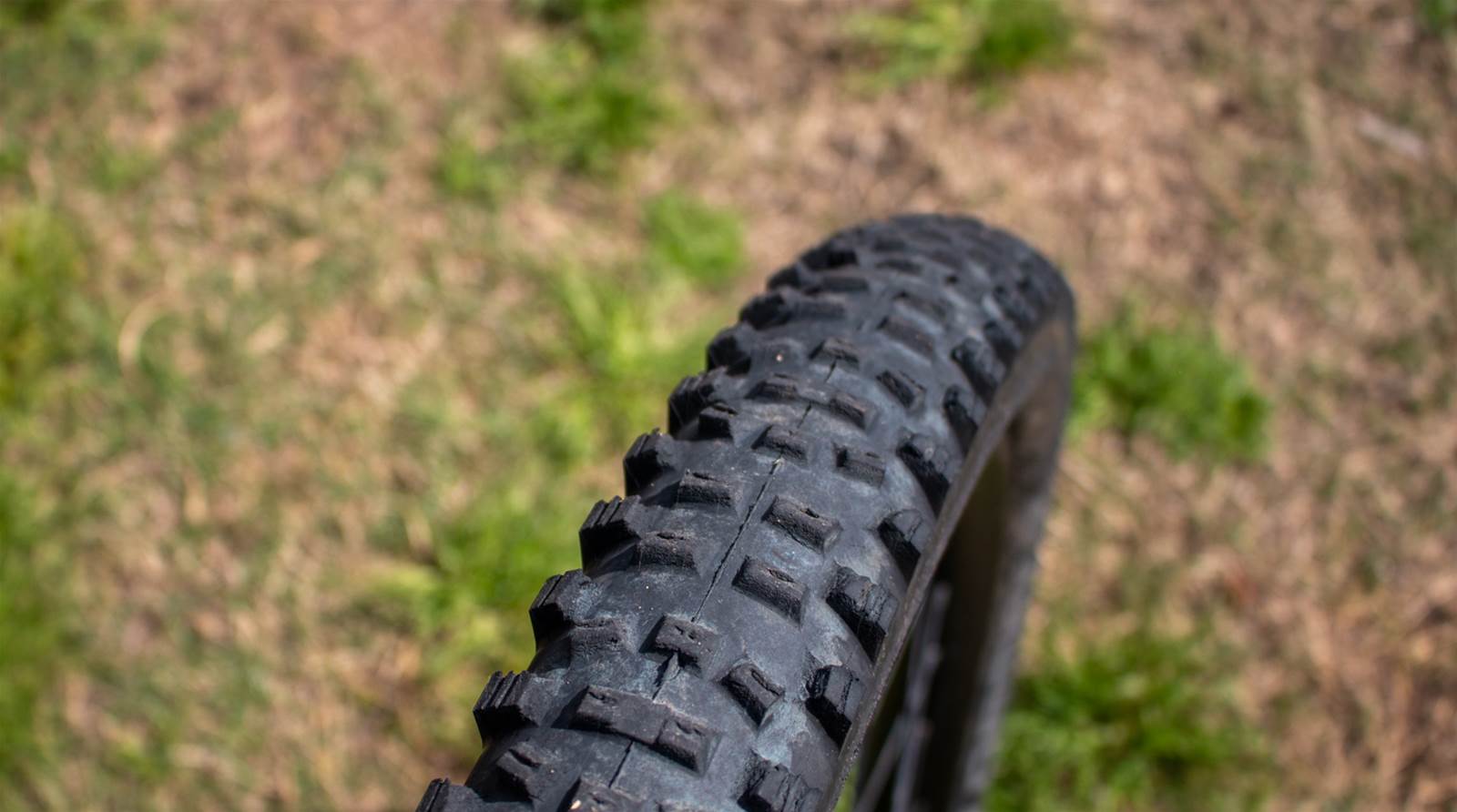 The rear tyre profile with a 2.35" Hans Dampf is about as narrow as I'd want to go.

The E_Enduros feature differing spoke counts, with 32 spokes in the front paired with a bulky 36 spoke rear hub. I’m a big fan of this approach for a wheelset that’s designed for long travel eMTBs. There aren’t many quicker ways to destroy a rear wheel than strapping it to an eMTB and taking anything but the smoothest lines. The oversized hubs are also designed to last, with thick 17mm axles used to increase strength and stiffness. Hunt claim that this added stiffness also increases hub bearing life. The rear hub is huge, a nod to the longevity Hunt are aiming to achieve with this wheelset.

Sticking on the hub theme, the large hubs accommodate oversized bearings that are double sealed via an additional seal on the end caps. Whilst I didn’t ride the wheels in terrible conditions, I’m not ultra-cautious when cleaning my bike and there was no water ingress after around 6 weeks of riding and cleaning.

Another interesting hub feature is the use of cooling fins on the rotor side of the hubs. While it’s hard to comment on their performance as I don’t have long enough descents close to home during lockdown to truly heat my brakes up, it’s good to see new approaches in this space nonetheless. The front hub isn't small either.

The freehub is another nod to Hunt’s focus on longevity with this wheelset, with a reinforced 6 pawl design that was engineered specifically for eMTB usage. Circling back to the rim, the E_Enduros rim sidewall is 25% thicker, and has 41% more material compared to their Enduro Wides, which is already an aggressive wheelset.

All these nods to strength and reliability do come at the expense of weight. All in all, a full 29” E_Enduro wheelset weighs in at 2621 grams taped out of the box, which is pretty hefty in everyone’s book! This being said, many hard hitting enduro wheelsets come in at over the 2000-gram mark, and then people add inserts to them, which can easily cover the difference depending on what type of insert you’re using. Due to their claims around rim strength and weighty nature, I decided to run the E_Enduros sans inserts. The profile of the 2.4" Magic Mary was bang on.

After around 14 hours of riding on the E_Enduros, I was enjoying my time on them. I hadn’t had to use a spoke key on them, and the rims were ding free. Matched with lower tyre pressures than I’d normally run, I was enjoying the ride feel, but more than anything I was enjoying the confidence of knowing I had a solid wheelset underneath me.

The wheels didn’t feel overly hefty compared to a 2000ish gram wheelset running inserts, and I’d heard a couple of trail on rim moments during testing up to the 14-hour mark with no rim damage. This did change in rather annoying fashion though.

My main riding friend is much better at riding than me. As I’m bashing my way through sections, he’s pulling up gracefully and putting yards into me with speed generating lines I’ve never considered. On a trail we’ve ridden plenty of times, he came out of a turn a touch slower than usual for a double, however he was able to pull up no problems. I on the other hand debated putting a crank in, before copying his pull up approach. Unfortunately, the rear E_Enduro didn’t quite make it, and that’s where I found the limit of both the E_Enduro rim and the Super Gravity Hans Dampf at 26psi.

Pulling over at the side of the trail, the E_Enduro had one hell of a ding that had led to the flat. There was no cut on the tyre, and the wheel wasn’t cracked, although it was obvious that it wasn’t going to seal tubeless trailside. The wheel had lost some spoke tension on the surrounding spokes, although after nipping them up trailside and popping in a tube, we rode for another hour or so without any further problems. The ding was sufficiently large to not seal tubeless.

When I got home, I sent the photos through to Hunt, to see what their advice would be for a paying customer when something like this happens. This is a case of 100 percent rider error, and I think this impact would have straight up broken plenty of wheels out there, so I don’t see it as a blemish on Hunt’s record.

Hunt’s response was that they would deal with this kind of incident on a ‘case by case’ basis (pun intended) as to whether the customer would receive one of their 35 percent crash replacement discounts, or a new wheel free of charge. In my interactions with the team at Hunt they’ve come across as genuine riders themselves, so I wouldn’t be surprised that had I been a paying customer they would have given me the benefit of the doubt with a new wheel or rim on the house. The ding didn't allow me to run a tubeless setup, but it did work with tubes.

Whilst the warranty on aluminium wheelsets is often viewed as less important than carbon wheelsets due to their lower likelihood to fail catastrophically, it’s a good gauge for a company’s faith in their product, nonetheless. Hunt back their wheels with a three-year warranty for the original owner, however there is an upper recommended rider weight of 120kg. Hunt also offer a 60-day ride and return period, which is plenty of time to get the measure of a wheelset’s feel on the trail.

I continued to ride the rear wheel, albeit with a tube as the wheel wasn’t sealing tubeless. I rode another 7 hours on the wheel with no issues, and the spoke tension remained even despite the only ‘truing’ being trailside when I first dented the rim. If I owned the wheels, I’d take a gamble on getting them to seal again by trying to hammer or bend the ding back into shape, but equally you could run the wheel with a downhill tube if you aren’t willing to take this risk, or you could get yourself a Hunt 36 spoke Downhill Rim for $139 to get you back up and running.

Other options out there?

DT Swiss have long been the benchmark when it comes to durable aluminium wheelsets and rims. Their H1950 Classic wheelset is comparable to the E_Enduros in terms of its aggressive intent, but the MY22 models haven’t been released yet. Another sturdy wheelset is something like Spank’s Spike 350 Vibrocore wheelset, but these wheels come in a couple of hundred dollars more expensive depending on what freehub option you need.

In terms of the price versus performance measure for the eMTB, and even the hard-hitting wheelset market more generally, I can’t think of a product offering better value for money than these wheels. Do you break wheels regularly? The E_Enduros are built to last.

Overall, I was impressed by the Hunt E_Enduro Wide E-MTB wheelset. Whilst the ding I put into the rear was annoying, this can happen on your first ride on a far more expensive wheelset, and I can’t really overstate just how much the incident was a case of rider error. The fact that I was able to continue running the wheels with a tube, and I think you could hammer or bend the rim back into tubeless ready condition if you were up for it speaks to the strength on offer with this wheelset, and there’s also good support on offer from Hunt to get you fixed up with a new wheel or rim.