The Trek Session is the bike with the most UCI Downhill World Cup wins to its name (38 to be exact). It’s also the downhill bike by which all others are judged. The phrase ‘looks like a Session’ recognises the Session’s distinctive look and consistent performance for the last two decades. Say hello to the all new Trek Session!

In recent years high pivot downhill bikes with idler pulleys (I’ll just say high pivot from now on) have become more and more popular. The Commencal Supreme is not only dominant at the top of the men's and women's fields but is also the bike of choice for privateers. Norco’s HSP downhill bike and GT’s current iteration of the Fury are also high pivot designs.

If you’re somewhat new to the sport, you’d be forgiven for thinking that this design style is one that’s relatively new. Whilst Trek’s brand-new Session using a high pivot design is different to its predecessor, it’s a concept Trek first implemented in their gravity line in 2003. The Trek Diesel was a high pivot bike that freeride legend and current Trek Gravity Team Manager Andrew Shandro piloted to second place in the 2003 Red Bull Rampage.

Fast forward nearly 20 years, and on paper the latest iteration of the Session ticks all the boxes for a high-performance gravity machine. The bike’s high pivot design has the tick of approval from current World Champion Reece Wilson, as well as team members Charlie Harrison, Loris Vergier, and Vali Höll. The new Session is an entirely aluminium affair (with the exception of the magnesium rocker link). This is another trend in the current crop of downhill bikes, and Trek say this is a result of direct rider feedback from their pro athletes. According to John Riley (Trek’s Director of Mountain Bikes), there was a feeling that the aluminium design kept the bike ‘calmer’ in rough terrain. The new Session is at home in 'chundery' terrain.

Despite the move to a high pivot design, the shape of the Session remains immediately recognisable, and the bike features classic Trek technologies such as the ABP (Active Braking Pivot), Mino Link adjustability, and a magnesium rocker link. 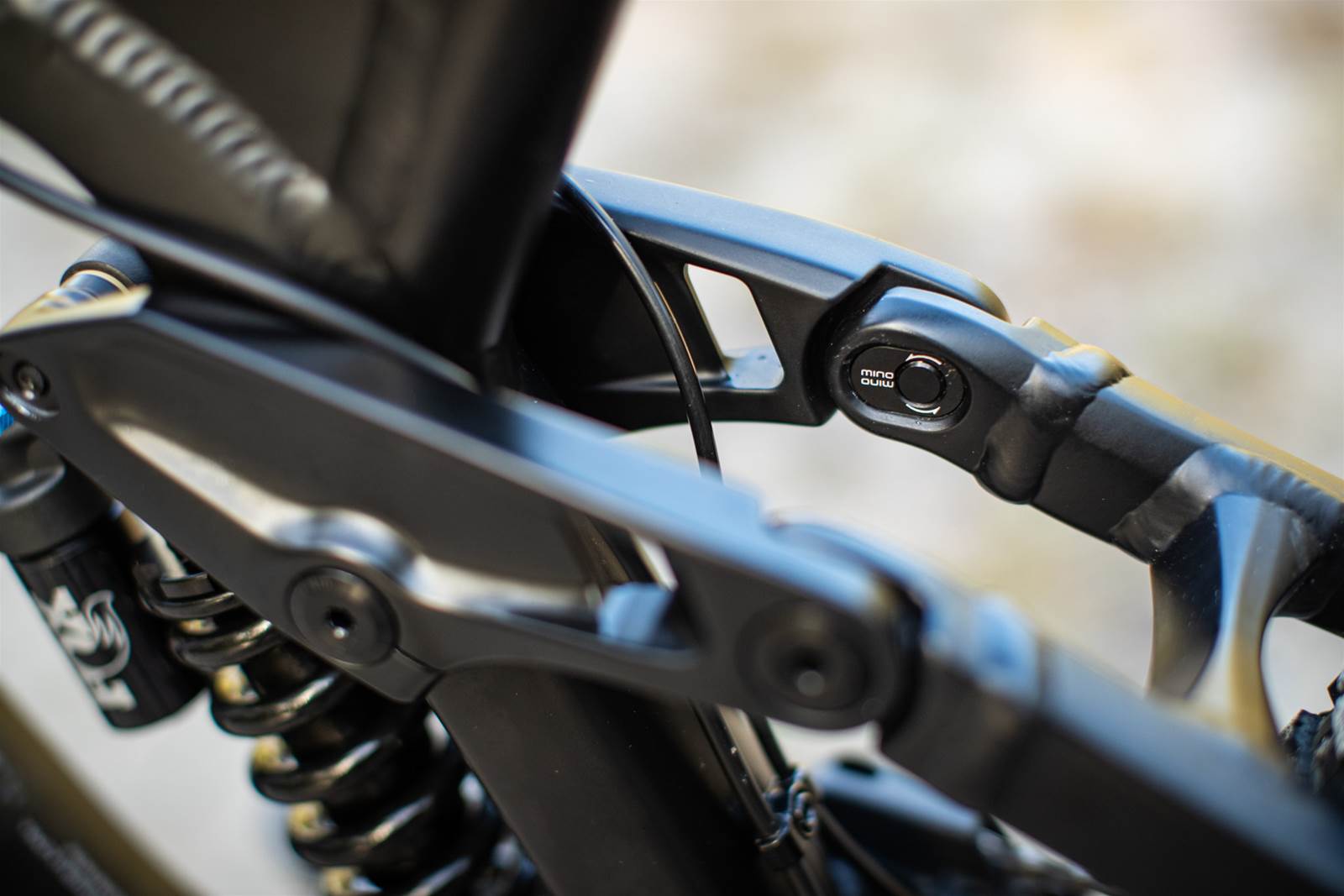 It wouldn't be a Trek without Mino Link adjustability.

My first impression of the bike was that it focuses on practicality over aesthetics. The down tube protection is extensive and removable, the chain stay protector is far beefier than many out there, and even the welds on the frame look like they mean business. The frame has some great features that Trek deserves to be commended on. The replaceable down tube guard is gargantuan, a must on a bike that’s going to have things striking it frequently. The standard cable routing is internal through the top tube, but there’s also the option to route cables externally on the underside of the top tube. Trek have done this to allow for fast race day swaps and repairs, or for customers who want the bike to be easier to work on. Whilst the unused cable guides underneath the top tube might look messy to some, I know quite a few racers and bike park riders who’ll appreciate this option. Internal or external - it's your choice with the new Session.

The Session 8 model I received was in the R2 size. Trek are offering three sizes of the Session, and are doing away with the traditional ‘small, medium, large’ sizing structure, much like Specialized’s S system. The Session range comes in R1, R2, and R3.

The bike ships as standard with the Mino Link in the high position, and that’s the geometry I’ve discussed above. Moving the Mino Link to the low position will shorten the reach and lengthen the chain stays among other things. Despite having varying chain stay lengths depending on size, it’s actually the same chain stay used throughout, with the bottom bracket position changing slightly with each frame size.

My Session 8 in size R2 weighed in at 17.95kg without pedals. All complete bikes come in 29” only, however all three combinations of full 29”, mullet (29”/27.5”), and full 27.5” can be run on the Session using the Mino Link adjustment, and a headset cup extender in the case of full 27.5”. For both mullet and full 27.5” setups you’ll need to run the Mino Link in the high position, which is the setting the bike comes in as standard.

Another feature Trek have added with the new Session is the ability to adjust the bike’s progressivity. A flip chip in the lower shock mount allows for two amounts of progression, 20 percent and 25 percent. The bike ships with 25 percent progressivity as standard, and it’s the setting I ran throughout testing. The progression chip is another neat feature aboard the Session.

The Session in Australia is available as the complete Session 8 tested here, as well as the Session 9 frame set. The frame set comes in the team replica colour with a Fox Performance DHX shock and the headset extender to run 27.5” wheels front and rear. The 8 model I tested is $6999, whilst the frame set will set you back $4999.

I immediately felt comfortable aboard the new Session. Trek have added about 30mm of reach onto each size of the new bike, and the 471mm reach on the R2 size felt bang on from the get-go. I wouldn’t have minded lopping an inch or so off the bike’s seatpost, but this is easily done at your local dealer if necessary. The cockpit was similarly easy to get along with. We took the Session to some classic East Coast DH trails.

In terms of setting the bike up, The Boxxer Select fork and Fox VAN rear shock don’t have lots of adjustments to worry about. Once the fork’s sag is where you want it to be there’s rebound damping and five clicks of compression to play with. On the rear shock there’s low-speed compression and rebound adjustment. The Boxxer Select is easy to setup, so you can get lapping!

A specific aim in the development of the new Session was to increase the bike’s traction and control in high speed ‘chundery’ terrain. According to lead engineer Dylan Howes (who has worked on every iteration of the Session for the last 20 years), the rearward axle path allowed by the new design moves the rear wheel from 12 to 25mm further backwards compared to old Session, depending on where you are in the travel.

On the trail this is immediately noticeable. Repeated harsh hits are kept under control at the rear, encouraging you to hit chunky sections faster. Bigger impacts are swallowed up by the new Session, which has reduced pedal kickback by 10-19 degrees (from 15-27 degrees on the old Session to 5-8 degrees on the new bike). If I had to describe the new Session in a word, it’d definitely be calm. There’s none of the pitching forward sensation you can get from pedal kickback, or the rear end losing composure under repeated hits or heavy braking. Another area the Session shines in is front to rear balance. The geometry was spot on for me, striking a great balance between stability, whilst still being able to link the bike through tighter turns and ride nimbly at lower speeds. The Mino Link and progression adjustments are also handy for different tracks where certain handling attributes might be more useful. I rode the majority of the testing with the Mino Link in the standard high position and 25 percent progression.

The idler is a key component of the Session, and it allows the bike to have its rearward axle path and reduced pedal kickback. Despite this, because the idler isn’t concentric with the main pivot Trek have been able to tune the anti-squat to allow the bike to remain agile and ‘poppy’. This is noticeable out on the trail, however if you’re the kind of rider that likes a bit of feedback about what’s happening underneath you, the Session almost completely mutes these sensations. Despite this, if you push into the bike it’ll give you the energy back, so I had no issues popping over trail features, or pre-jumping to pump terrain. Despite its preference to plough, the Session will reward an active rider.

Overall, I was thoroughly impressed by the new Session. Whilst the previous Session is the bike ridden by the current World Champion, I suspect Reece Wilson will have no problems remaining at the top of the results sheet aboard this new bike. The way Trek have blended the Session’s handling and suspension kinematics makes for a confidence inspiring ride that keeps things calm when the trail gets rough and fast.

After more downhill and long travel bike reviews? See below for some more heavy hitters.

One componentry choice on the new Session I was confused about was the 180mm rear rotor. Whilst I didn’t ride the bike on any tracks long or steep enough to really need a bigger rear rotor, I think 200mm should come as standard front and rear on a downhill bike, and there’s plenty of professionals running 220mm rotors on the World Cup circuit. Whilst you’ll need to source adaptors, you can run 220mm rotors front and rear aboard the Session.

The Session is a great choice if you’re after a Downhill race machine that’ll go fast from your first ride. One style of rider I wouldn’t recommend the Session to is the rider who enjoys selecting the smoothest lines and feeling what’s going on underneath them to achieve this. Whilst the Session responds well to being pumped and pops around the trail nicely, the bike will happily smash through most lines without letting you know your line choice could be better. Riders with a tendency to plough will love the Session.

In terms of value for money, the Session 8’s price of $6999 is there or thereabouts in the 2022 downhill market. In terms of componentry, I had no issues with the spec that came on the Session 8, and key components like the brakes and suspension offered fantastic performance.