The Black Snake in Val di Sole was the perfect proving ground to determine who would be Downhill World Champion.

The 2021 UCI Mountain Bike World Championships finished with a bang on Sunday 29th August. With just four Downhill titles left to be contested, the climax of the gravity racing for the event had arrived. The track walk was done, practice and qualification were finished - it was time to race and see who could tame the Black Snake - or just avoid getting bitten.

After Nino Schurter's triumph in Cross Country, it was Greg Minnaar's turn: for the second time in two days, Val di Sole crowned the greatest athlete in the history of the respective disciplines. At almost 40 years of age, the greatest Downhill rider of all time finally owned the Black Snake, winning his fourth rainbow jersey. French rider Myriam Nicole secured her second World title, while Goldstone and Jankova won the Junior titles.

GOLDSTONE AND YANKOVA ON THE TOP OF THE WORLD AMONG JUNIORS

In the Junior DH races, Canada and Bulgaria took the biggest prizes. Jackson Goldstone won the men's race with a time of 3.37.097. The Canadian raced at his best in the second half of the race, after passing third at the second split. Behind him, Brit Jordan Williams (+1.812) and New Zealander Lachlan Stevens-McNab (+3.560) rounded out the podium.

Bulgarian Izabela Yankova lived up to the predictions by dominating the women's race in 4.30.865. Behind her, Norwegian Kine Haugom (+10.844) and Canadian Gracey Hemstreet (+13.245) stepped on the podium.

Remy Meier-Smith had crashed in the lead up injuring his shoulder, and while qualifying 10th, didn't complete his race run.

THE BLACK SNAKE CROWNED ITS QUEEN: IT'S MYRIAM NICOLE

With a fast and flawless run, Myriam Nicole has won her second Elite Women’s World title in Val di Sole. The French rider mastered the Black Snake, posting a time of 4.06.243 and putting huge time gaps into her rivals.

For Nicole, this World title comes after Mont Sainte-Anne 2019, and marks her second win in Val di Sole after 2011, when she won her first World Cup. “When I won the World Championship in Mont Sainte-Anne, I didn't have any pressure on me. This time I had a lot of pressure, and I'm stoked at how I managed to handle it, riding smooth and relaxed, especially in the central part. Last year I could wear the jersey for just one month, this time I want to enjoy it in full. Having won the World Championship here, where I took my first World Cup stage, on a track that is the essence of Downhill for me, really means a lot.”

Fellow French rider Marine Cabirou (+4.827) had to settle for the silver medal this time. The winner in Val di Sole 2019 had a great run but just wasn't as fast on the top part of the course. Switzerland celebrated bronze with Camille Balanche (+6.099), on the World podium again after her silver in Leogang 2020. Austria’s Valentina Höll also left the race disappointed -  she was making a great run when she crashed halfway through the course, spoiling the chances of a medal placement.

MINNAAR TRULY IS THE GREATEST OF ALL TIME

At almost 40 years of age (he will turn them on November 13th), the South African phenomenon won his fourth World Championship, 8 years after the last, 18 years after the first, back in 2003.

Minnaar also broke his curse on the Black Snake, one of the few tracks in the world where he had never won a World Cup race. 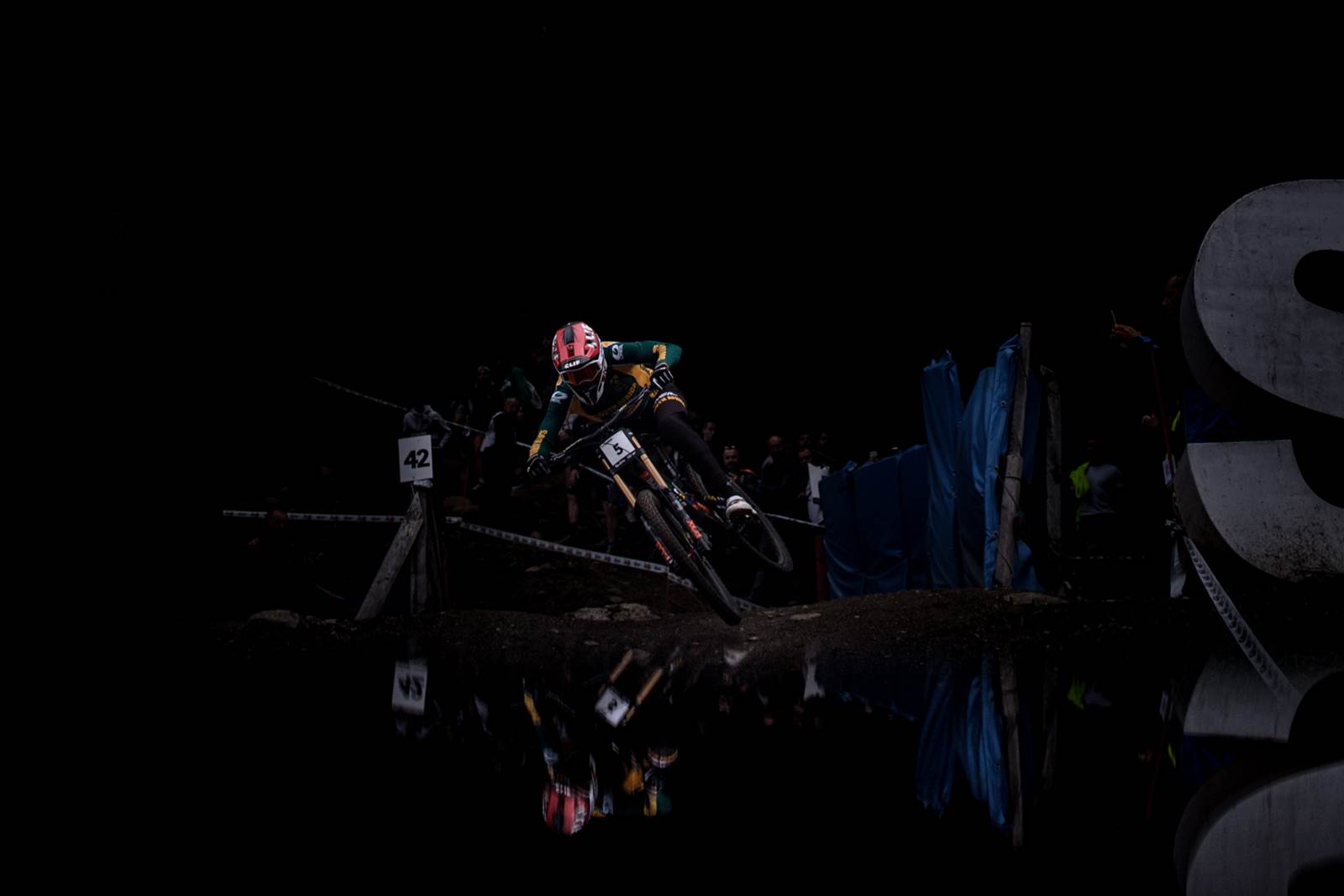 The final descents and the party that followed created a huge flow of support, with the large track-side audience booming in the continuous twists and turns of the race, on a track capable of thrilling, deceiving and disappointing like no other.

Greg Minnaar hadn't won a World Championship for 8 years, but he never gave up. Those who had seen him train in Val di Sole in recent weeks were adamant: Greg can do it. The South African champion had tested lines, familiarised himself with the track, and had grown in confidence day after day.

"I knew a victory was possible," said the South African, "I knew that by giving everything I could make a great run, but until the end you never know if it will be enough."

The GOAT from Pietermaritzburg made his mark on the lower part of the course, after passing at the second split over a second behind Frenchman Benoit Coulanges. From there, Minnaar found his flow, floating over rocks and roots and drawing a perfect line in the last corners. 3.28.963 was the time of the golden run, one that none of the scorching French trio of Bruni, Vergier and Daprela could match. Second place went to French rider Benoit Coulanges (+0.227), who made a great run particularly in the middle section. Bronze went to Troy Brosnan (+0.441). Three athletes in less than half a second after 2.100 meters of competition: a clear sign of how competitive the fastest riders in the world are. The Val di Sole Tourist Board Director Fabio Sacco was pleased with the Val di Sole 2021 World Championships. "I wish to thank the sponsors, the partners, the organisational staff, the volunteers and all the people who contributed to the success of an event whose technical and media success is there for everyone to see."

"The public could safely return to live a great sports event, thanks also to a considerable organizational effort, and the shots of our territory travelled around the world on the screen of fans and enthusiasts, along with the feats by the greatest mountain bike champions."

Val di Sole is a regular stop on the World Cup circuit and for other major events, and the World Championships will land there again in a few years time.