Take a road trip through Tasmania and experience two of the best riding locations in Australia! First up is the trip to Maydena!

Hit the road to the trails

With the 2nd round of the Enduro World Series (EWS) landing at Blue Derby in late March 2019, and plenty of updates to the trail network at Maydena Bike Park since we first visited, it seemed like the perfect opportunity to travel south to the Apple Isle for a little over a week of mountain biking, travel, and some race reporting and spectating. Whether it's because we left booking accommodation late or we loved the idea of it – we opted to book a campervan for the trip. We'd need a car anyway, and this way we could make like a snail and carry our home for the week with us. If you have seen our last two issues you'll have read a couple of Places That Rock features from Maydena Bike Park, looking at the Wilderness Trail and also Regnans Ride. Both are on the moderate or beginner end of the spectrum at Maydena Bike Park. From the outset that's never been the core of what Maydena Bike Park has been all about, but they actually have plenty of trails to suit intermediate riders and some for beginners. The hill at Maydena is imposing. You can't even see the top from the bottom but be assured the summit is 820m above where you are standing. You're in the south west of Tasmania. It's wild. It's rugged. The trails are predominantly steep and demanding. And park manager Rhys Ellis wouldn't want it any other way. 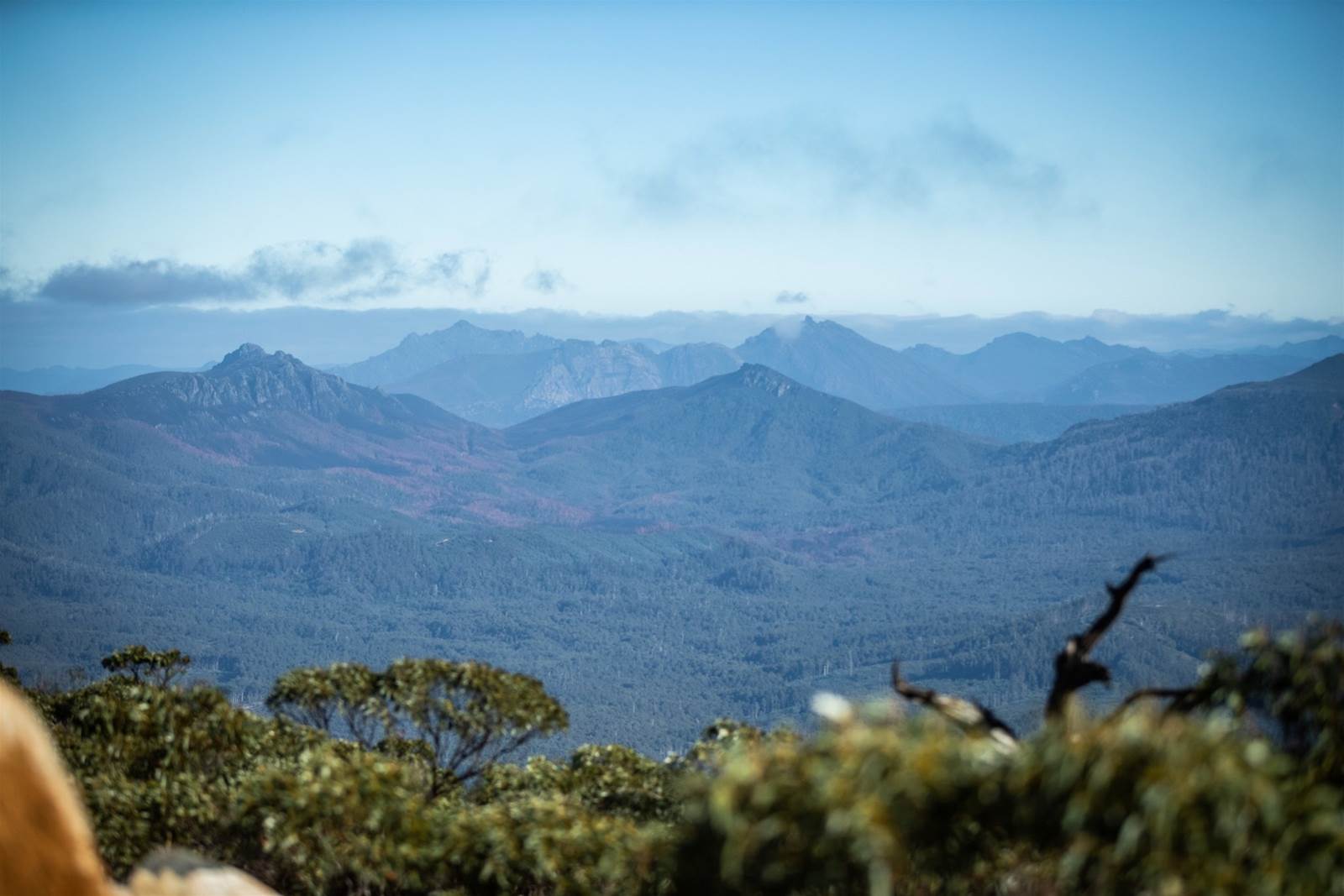 “It's a giant hill, and a steep hill. Part of the trails here are just based on getting down the hill. Australia is undergoing a transition in riding style, from a far more cross-country based riding style. If you rode the valley in Whistler or a blue trail in Squamish you'd have no problem riding here. But Australia is catching up with more of a global sense of trail standards. It's a bit subjective, but Maydena riding is super fun and that's what we intend to keep doing. We're going to continue to make sick trails that are fun to ride.”

Shuttling is at the heart of mountain biking in Maydena Bike Park, and while you can pay a low entry cost to use the climbing trail and therefore access all the trails from Midline down, you're burning a whole lot of time and energy which you could be spending exploring the range of the trails that Maydena has to offer. We rode the climbing trail once, and ticked it off the list. Tim took the BMC Trailfox AMP eMTB so clearly he found it a bit easier, but it did chew some battery life. It's a hard climb! When we visited Maydena Bike Park in March it was cold and wet when we first arrived – and sunny with hero dirt the next day. It had been snowing a couple of days before we arrived. Ellis explains that's a pretty good example of the Tasmanian environment.

“In the middle of summer we had to shut one day because of a bush fire, and within one week we had to shut again because of snow. That's what you're dealing with in Tasmania. The fact that this is a place that that happens regularly is what makes it one of the sickest places to ride. You don't get this type of terrain and climate and feel without that happening. It's part of the Maydena experience. Going to one of the wildest places to build a bike park makes it what it is – it's such a special place.” And Ellis isn't over-selling it. This is a wild corner of Tasmania. On the drive towards Maydena you're aware that you're in an alpine scale environment. You are surrounded by big hills, high alpine lakes, fast flowing rivers and old growth forest. If you haven't visited before, every twist and turn on the drive from Hobart will have a new vista to take in. I live in Queensland and grew up in Sydney, it's a totally different feel coming to such a different climate, especially when you're high in the sub-alpine areas at the top of the park.

Getting onto a shuttle with your bike loaded onto the trailer is like strapping in for a theme park ride. I've said before that heading into the shuttle road feels a little like the scene from Jurassic Park, wondering what has been created beyond the gates. There is nervous excitement sitting in the shuttle bus. What are the conditions going to be like? Am I riding well enough? Have I brought the right bike? How come no one else has an open face helmet? The reality is that there are a whole lot of ways down the mountain. And we saw riders gingerly making their way down the Wilderness Trail on a Canyon hire bike, to riders getting their high speed fix before heading to Derby to race the EWS.

Given the temperatures were more suitable for Tasmanians than a Queenslander like me, we caught up with West and Korum around the fire. They were visiting from Western Australia, and also needed to warm up. Covered in mud and huge smiles, they stripped off their jackets by the fire at the base of the park. It's the first time they had visited, and they were really impressed.

“We'd heard about Maydena, read about it and seen the videos and photos,” said West “the lure of the elevation really got us here though. There is 20-25 minutes of pure descent. You have to stop at Midline because your hands and your arms are burning. We don't get that back home, where we ride two or three minute descents with the occasional four or five minute run. This is 20-minutes of pure downhill.” There are long runs available in Australia, like at Thredbo on the Cannonball Run or the All-Mountain Trail. But they pale in comparison to Maydena Bike Park, as there are so many different trails with different features and grades.

“The mountain is just insane,” adds Korum. “There are so many trails up there and a lot of really cool man-made features and natural stuff. The amount of hours that have gone into it is phenomenal. For us to have this in our own country, with no need for international travel, or currency exchange, long flights, huge time zone differences or the like makes it so much more accessible.”

And that's the sort of space Maydena Bike Park is playing in. If you haven't been, you might not fully grasp how big the area is, and the range of the riding available within the park.

“It really is world-class. We go on one or two mountain bike trips a year, we've been to Queenstown and Whistler and other places in Canada, Indonesia... all sorts of places!” Korum added. “If they have been going for a Whistler sort of vibe here then they have nailed it.” Maydena isn't as busy as Whistler, not yet, but riders feel you can have a similar experience after only being open just over a year – but it's unique. Maydena Bike Park marches to the beat of its own drum.

“We had to figure out who we were as a bike park, and having all the facilities was part of it.” Says Rhys Ellis, who was hand-picked by Simon French of Dirt Art to manage Maydena Bike Park. “It sort of happened out of necessity too. If we didn't have a bike shop or food available, we might not exist. We had to build it. But it's now become the feel of the place. The same guy who is signing you up for your uplift might rebuild your wheel, sell you a beer or show you around the bike park. And that's the feel that we want, we want you to feel like you're part of the bike park, not another person just being churned through.”