Pirelli's Scorpion range has a cross-country and marathon tyre with the XC RC - we've thoroughly tested the 2.2" racey tread.

Through the middle of 2020, we have tested just about the whole range of mountain bike tyres from Pirelli. Their Scorpion range has specific models for Trail, Enduro, XC, eMTB - and cross-country racing. Much of what Pirelli do with the Scorpion range of tyres remains the same across the Trail, Enduro, XC and eMTB range. They have conditions specific tread options and rear specific tyres, with Hard conditions, Mixed conditions and Soft conditions tyres along side the Rear tyres. It's a great way to pick your tyres, picking ones that suit the conditions you ride in. Afterall, if you ride a lot of rock and loose over hardpack - do you really need a Soft conditions tyre designed for deep loam? Just because it looks cool doesn't mean it's the best choice!

Catch up on our other Pirelli Scorpion reviews:

Pirelli Scorpion tyres use casings that get stiffer depending on the use the tyres will see. You will see that the 2.4" Pirelli Scorpion Trail tyres have the ProWall casing with 60tpi and reinforcement, but the HardWall casing on the 2.4" and 2.6" Enduro casing has bead to bead nylon protection as well, and then HyperWall on the eMTB treads have an added strip of rubber protecting the sidewalls and supporting the tyres under very high loads. 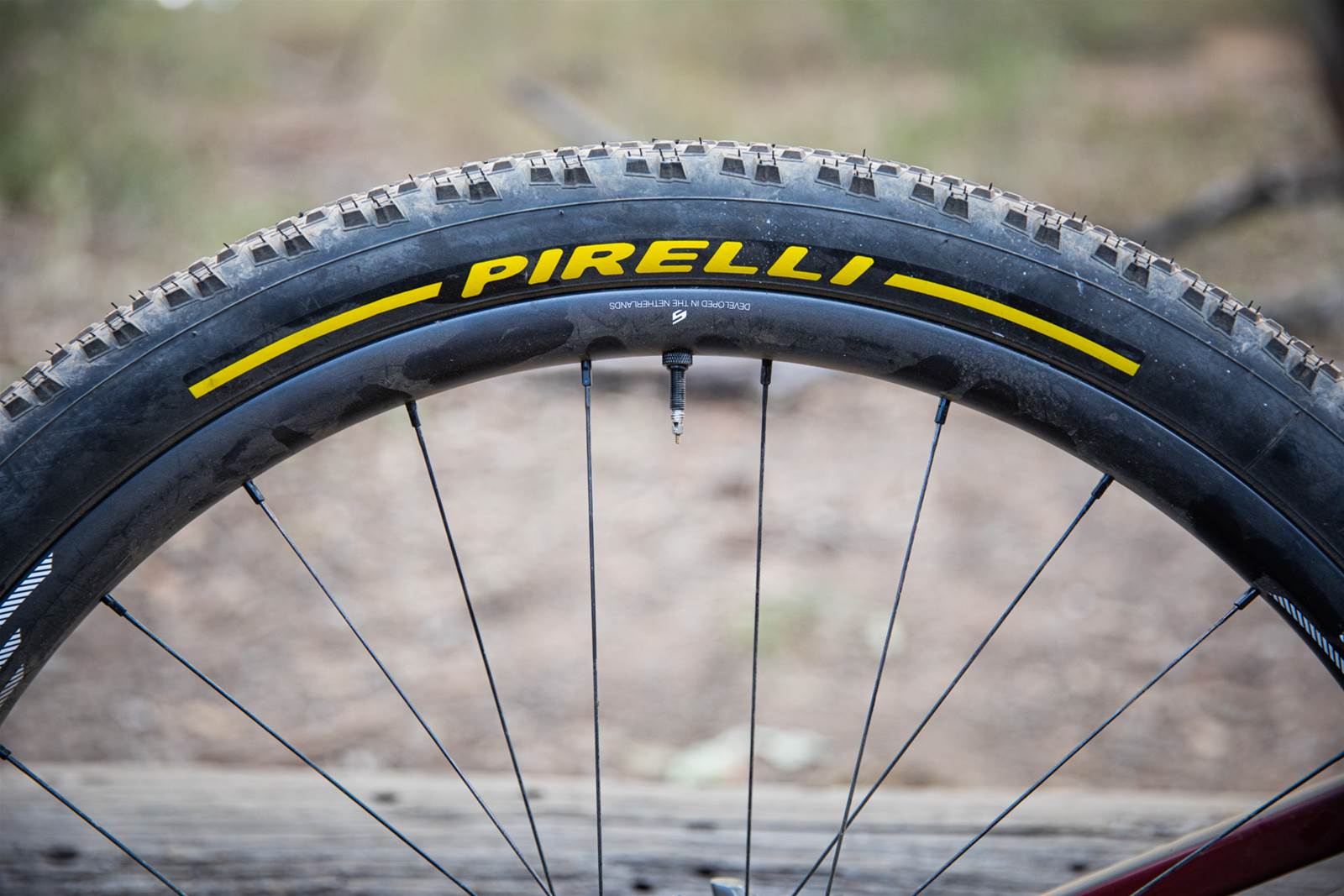 Oh, and these ones have the yellow logo!

The Pirelli Scorpion XC RC range has two tyres - both with the same tread pattern. You can see elements of the Mixed and Hard conditions tyres on the tread - and the tread is designed to be used front or rear - or both. The Trek-Pirelli Team often use the XC RC on the front, with the Hard conditions 2.2" on the rear - so it really is an addition to the range. But it is only available in 29x2.2" - the racer's choice.

The XC RC (660g) is a 29x2.2" tyre with ProWall 120tpi casing and 120tpi sidewall reinforcing, whereas the XC RC Lite (610g) does away with the extra reinforcing and drops about 50g per tyre in the process. Like Pirelli's 2.2" XC tyres, the XC RC are designed around wheels with a 25mm internal width, to ensure the casings inflate to the right shape and edge and transition knobs are in the right place. 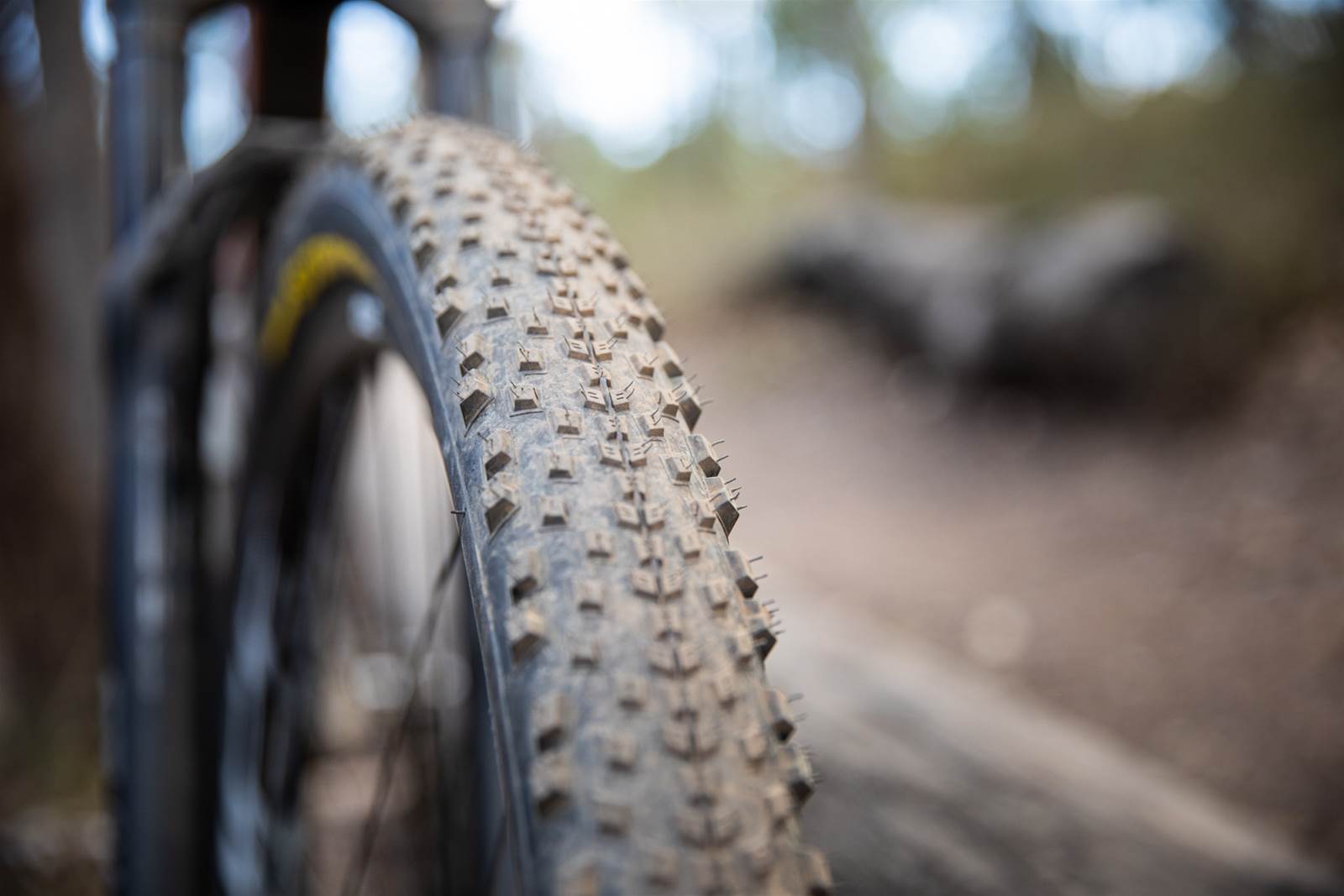 The tread pattern has a closely spaced centre tread, with fairly open transition knobs and more aggressive side knbos, that sit in two positions for excellent cornering support. This means it rolls nice and fast, but has enough edges in contact when cornering. The tread knobs enlarge closer to the tyre so they are well-supported to prevent squirm on hard surfaces.

Pirelli use their single compound rubber, and this means we've had excellent tread life on all tyre models we have tested. While single or dual compound are often shunned in comparison to triple compound rubber tyres - Pirelli are the masters of rubber. They've spent a long time getting this right, for the best mix of 'chemical' grip with terrain, and wear life. Across the whole range we have been very impressed. Sure, something softer and tackier would be nice for a gravity race day tyre, but really, the long life and great performance over that time has really be a standout.

Given so much is the same, you'd be forgiven for thinking that there wouldn't be much difference in setting up the Pirelli Scorpion XC RC compared to the XC RC Lite. But when you hold both tyres out of their packaging, unrolled ready to fit, you get a clearer idea of how the ProWall casing differs to the Lite casing. Flimsy isn't the word, but supple sure is.

The Scorpion XC RC Lite tyre is almost like a snake, whenever you try to hold it it twists around and makes a new shape over your hand, or the rim, as you go to fit it.  It's not hard to fit, but it shows how supple the casing is. The ProWall almost supports its own weight once in a tyre shape.

Both tyres were easy to seal on their respective wheel sets, but to get the right ride feel and support the XC RC Lite models did need substantially more tyre pressure - about 2psi more than the XC RC models with the ProWall casing.

The rolling speed of both models was immediately noticeable - they're fast! As the ProWall models arrived first, that's what I rode a lot first up. While they're light, they aren't crazy light. Ok, 660g is light for a tyre, these did come in closer to 690g though. But they inflate to a true 2.2", and the extra nylon layer in the ProWall model not only offers a lot of puncture protection, but it means you don't feel like you're on an underfilled water bed when trying to corner. The strong casing really lets you take advantage of lowering your tyre pressure for traction, as opposed to needing a minimum pressure just to keep the tyre in place.

My first ride was a lot of mixed terrain. And I'll admit it, it was a KOM hunting ride. Not a specific one, just riding a big loop I'd done before, but aiming to cut a huge chunk of time off it. Can I make this 5 hour ride, 4 hours? That sort of thing. Well, yes, I could. While the previous loop was on a different brand of low-profile 2.25" tyres, the difference was also in the motivation - and not stopping for photos. But let's think about what happens when you're pushing to ride faster - no matter the motivation.

You take more risks on descents, enter corners faster hoping to hold more speed for the exit, and roll blindly into sections all in the name of not losing speed. And the Scorpion XC RC ProWall gave me no issues.

They didn't offer the sure-footedness of the 2.4" Scorpion models I had also been riding - but they were well up to the loop I was riding, which was predominantly back roads, multi use trails, country roads and some steep old forestry roads. It wasn't technical, but it was fast with plenty of loose rock at times. The sort of terrain that you'll find making up a lot of a marathon race route or marathon stage race

I took the same tyres out to Hidden Vale Adventure Park. While it's the home of the Epic marathon, it's also the home to around 100km of World Trail singletrack, and a bunch of rock, loam, dirt and dust. And magpies at that time of the year.

From Skyfall to Plane Sailing, the XC RC ProWalls rode exactly as I expected. The really well-supported edge knobs have a predictable break away feel, where you know it's coming, but unless you go and jump on the brakes, it's a point you can hold at. This is the expected norm for an XC racing tyre, and the Scorpion XC RC really excels.

On really steep climbs, I even found that these tyres had better grip than other low-profile treads. Especially on that really fine gravel over hardpack, not too different to the ball bearings on concrete feel that Mt Stromlo has. 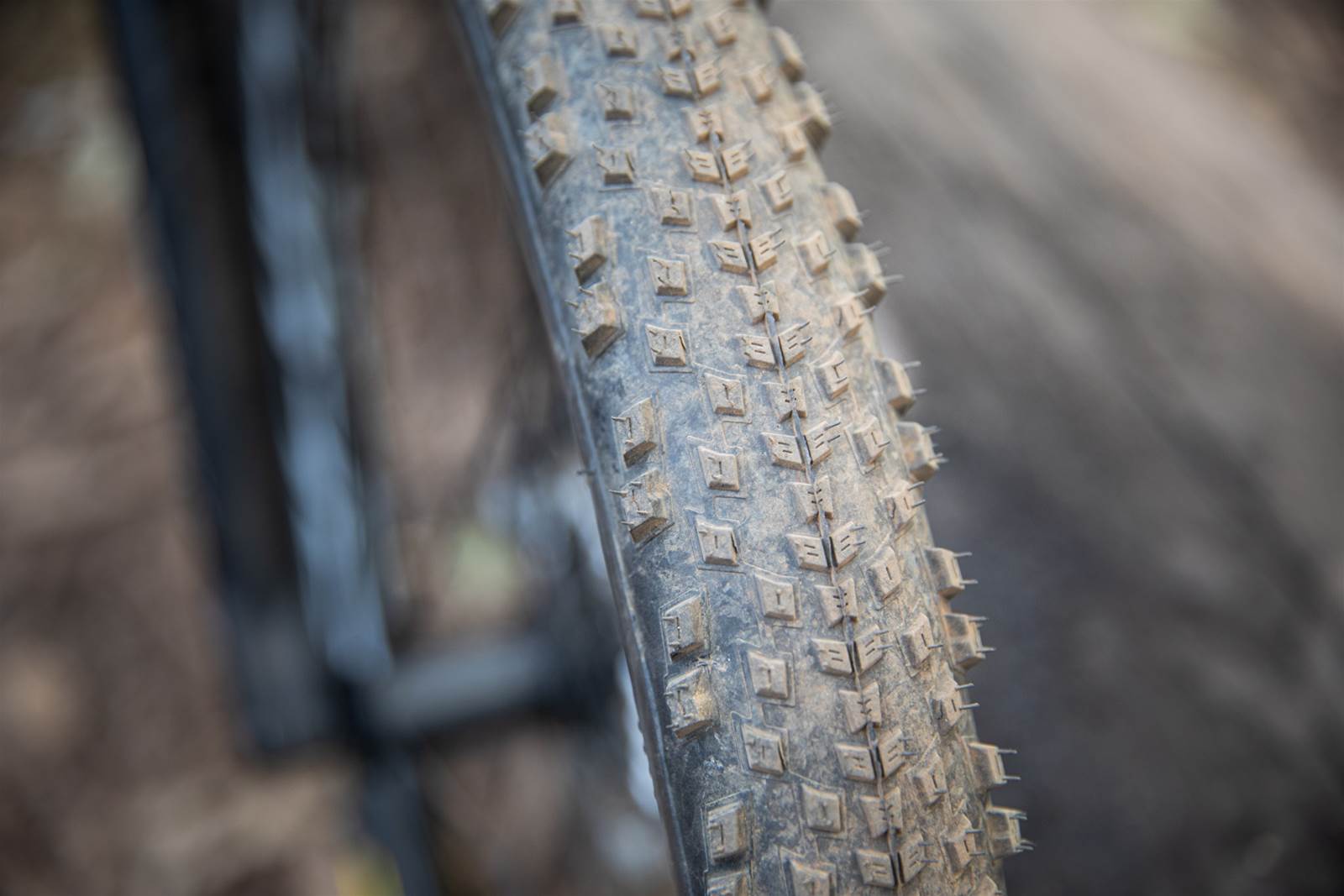 Next of course, was the LITE version.

Overall, everything remains the same as with the ProWall version - except for the obvious changes. These tyres did need more pressure to get a similar ride feel. Nothing crazy, but more like 24psi as opposed to around 21 or 21.5psi. Like the ProWall model, I had no burping, tyre tears or seeping for the entire test period.

I did a lot of the same sort of riding - big routes, exploring rides over into the National Park and State Forest behind my place, and of course local singletrack. While the differences were small, they added up.

At speed, I didn't feel nearly as confident. On a really racey tyre you get used to having a bit of a constant shimmy on the dirt. You just don't have deep lugs, but it goes so fast it doesn't matter - it's a justifiable sacrifice. On the ProWall model, it really rewarded pumping the bike to load up the tyre and therefore gain traction ahead of corners and features. The LITE model didn't react in such a confidence inspiring way, as the casing doesn't offer the same kind of support.

With more pressure, it was a little more likely to ping around. Or when pushed quite hard, it just didn't give the same feedback. This might be most noticeable in places like catch berms at the end of a chute or long downhill straight, or even negotiatigin moto ruts on a random steep fire trail. Even having to shift lines on a steep descent did lead to some clenched moments. Similarly, they weren't a lot of fun in loose moto ruts with lots of wash outs.

All that aside, these were even faster on other terrain with less high speed, loaded cornering demands. The supple tyres really added another element to an efficient XC bike, and even just that 50g weight difference seemed to be noticeable. These tyres really were fast!

My tyre preference tends to lean towards a more agressive front tyre and faster rolling rear, usually with a casing that offers good protection. So it was a little different for me to run the XC RC front and back, and after riding the ProWall, I was thoroughly impressed. But then, I thought the LITE version would be risky. No protection, just the rubber and 120tpi casing? That's crazy!

And sure, that tyre didn't have the same support as the ProWall model. But that didn't stop me from riding that pair just about exclusively for a couple of months. They're fast tyres that have an incredible wear rate, and I feel like I'm running on a huge string of luck with having zero punctures on either model (or the 2.4" Scorpion models I tested before these).

At $99.99 per tyre, the Pirelli Scorpion XC RC tyres are right in the game for high quality XC tyres. What I really like is that they aren't for race day only. There are cheaper tyres out there, but I can guarantee that they lose their effectiveness in less than 300km use. I've had at least 3 times the use on the Scorpion XC RC and I'd still line up at a major race with them on as is.

In terms of ProWall vs LITE - it depends how you ride. A lot of smaller riders end up on stock width wide bars, middle of the range suspension settings and reinforced tyres when none of them suit their weight and load they put on the bike. In that sense, the XC RC LITE would be an ideal fit for lighter riders. At about 73kg and clumsy enough to put more load onto tyres than I should be, I still found them really good - but if I had to choose a pair it would be the ProWall model, especially to gain a little more compliance back in rougher terrain by dropping some pressure and not losing sidewall support. I even think the ProWall model could make a great bikepacking tyre, with excellent tread life and a strong sidewall, along with the fast rolling centre tread and supported side knobs.

If you're looking for a new XC, Marathon or Stage Race tyre, I would highly recommend the Pirelli Scorpion XC RC tyres. Just match the casing option to how you ride. A van full of tyres and wheels!