Pirelli have been coming out with lots of great tyres recently. Mike Blewitt has spent plenty of time on the XC RC 2.4's, and he's a fan.

Pirelli are a global name in the world of tyres. Their motorsport success on and off road is well-known, and the iconic Scorpion name has carried into the world of mountain biking, with Pirelli jumping into the mountain bike tyre game with two feet in early 2019.

While the initial launch Scorpion saw 2.2” and 2.4” tyres in conditions specific models (Hard, Soft, Mixed and Rear specific), this range was always going to expand. And that's exactly what it has done since then, with Pirelli Scorpion Trail 2.4” and Enduro and eMTB 2.6” models. The fast Pirelli Scorpion XC RC 2.2" tyres were developed in conjunction with the Trek-Pirelli mountain bike team launched last year. And now, Pirelli have released a wider 2.4" version of the Pirelli Scorpion XC RC tyre, matching the changing demands of cross-country riding and racing. 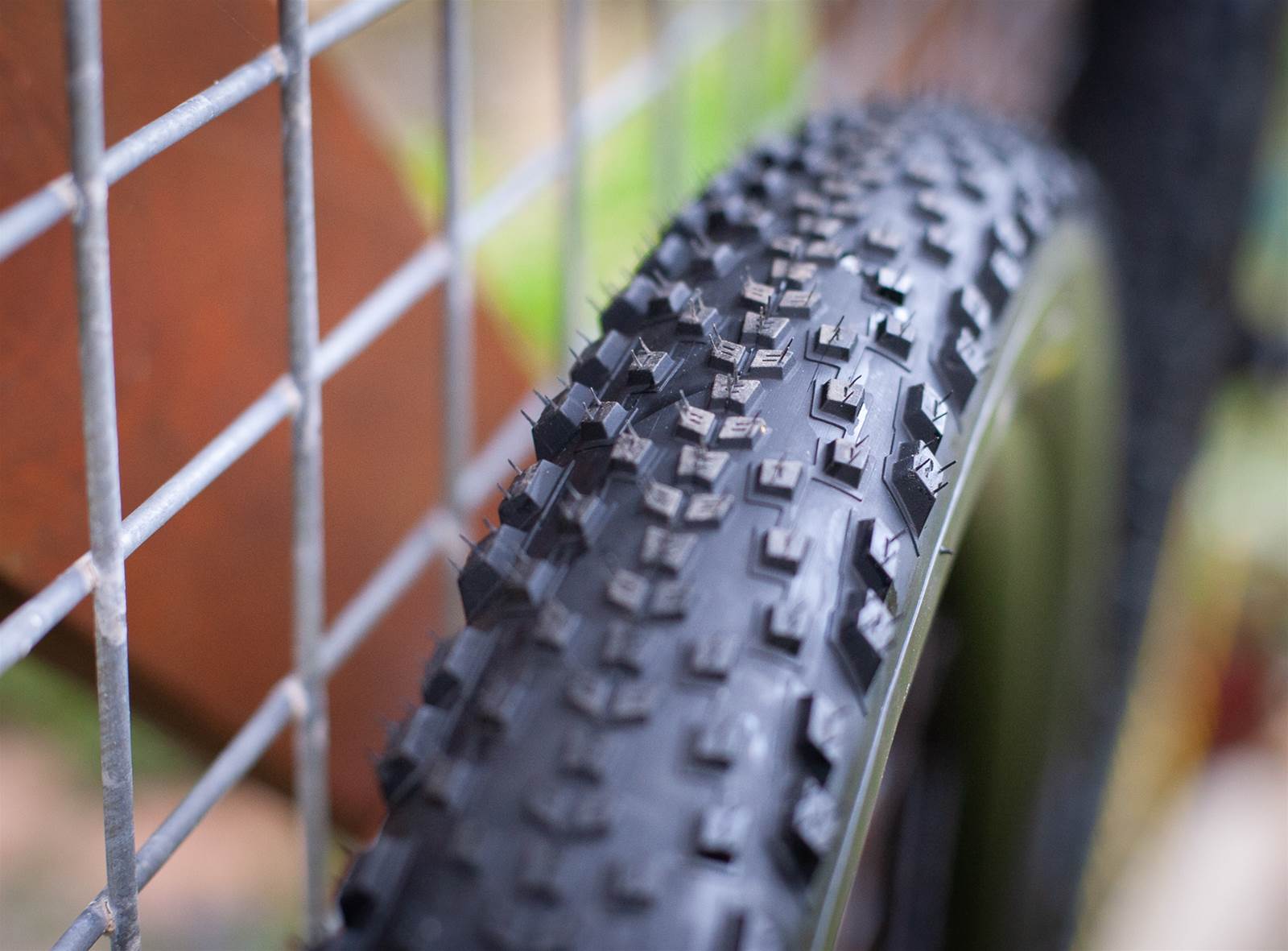 I was sent a pair of both the ProWall and Lite models of the 29x2.4” Pirelli Scorpion XC RC just before they were released in June. Both have the 120tpi (threads per inch) casings, but the ProWall has extra sidewall reinforcing. This helps puncture resistance and increases stability under load. Pirelli designed these tyres for high end cross-country racing, for an expert rider who can eek every bit of performance out of their bike and body. For a lot of us, the 2.4” Scorpion range in the LITE casing will be more versatile for general cross-country and marathon use. But if you just want all-out speed, then read on – the XC RC might be exactly what you're after.

The tread pattern is the same as the 2.2”, with a close centre tread, two sets of transition knobs that have a very broad base of support (for less squirm) and then the siped edge knobs, which operate at two levels at the edge, so they're not all or nothing. Looking closely, you can see that while there is lots of grip for acceleration, the shape of the transition knobs suit braking traction, to make sure you have the control you need. 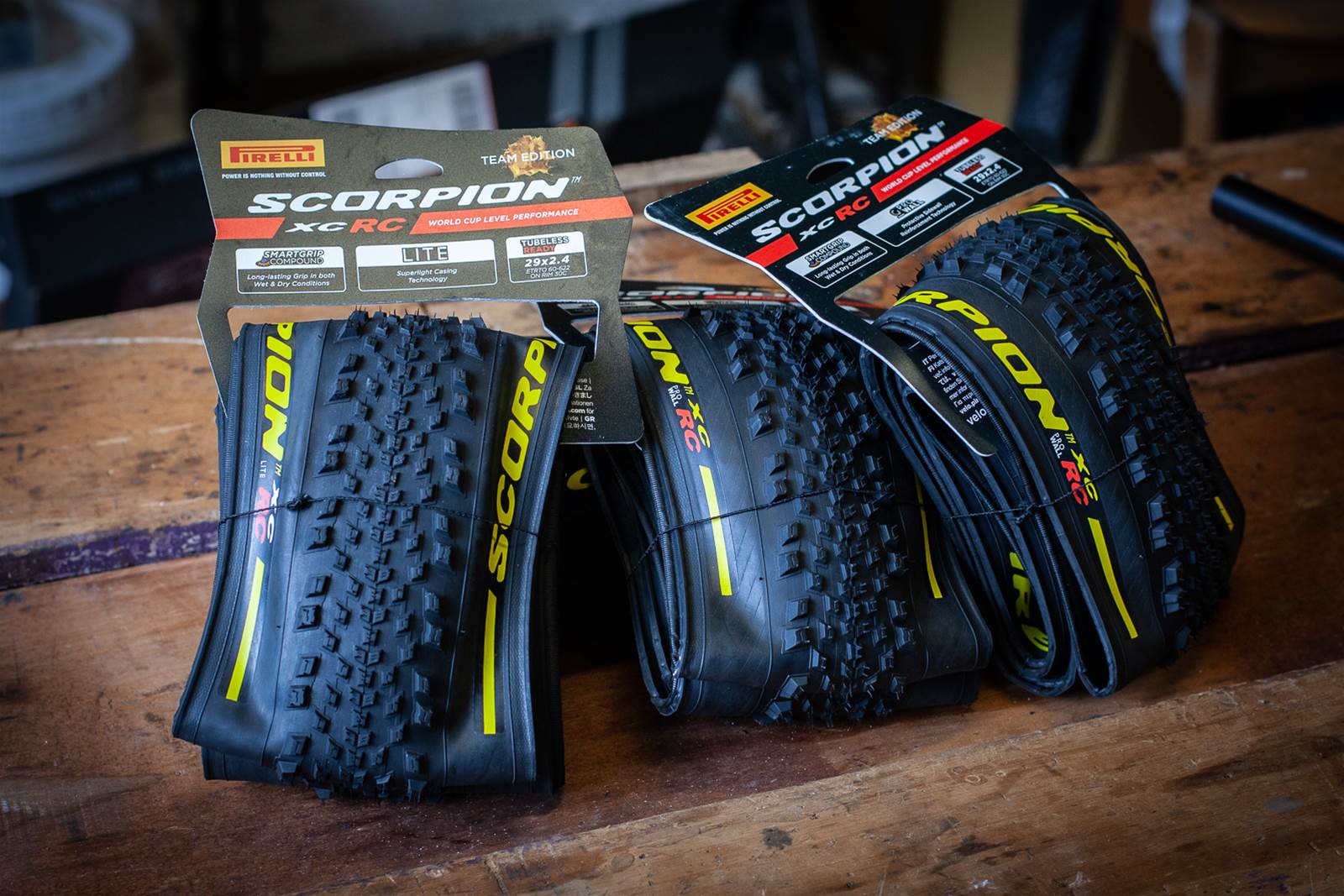 Mike was sent both casing styles available for these tyres.

With this tread pattern, the tyres are aimed at use on rocky terrain and on hardpack, as they don't have the tread depth for looser terrain or wet, loose terrain. One of the Mixed conditions tyres in the 2.2 or 2.4 options would be a better fit for those conditions. However, the Scorpion XC RC are designed for going fast when used by a capable rider, and the larger tyre volume can assist by providing a bigger footprint than the 2.2" models.

Beyond the casings, all the tyres use the same rubber - or SmartCompound as Pirelli call it. Many other manufacturers use two or three compounds in their tyres, with the softer compounds as an outer layer, typically on the shoulders or edges, with firmer rubber either in the centre or as the core of the knobs. With one type of rubber throughout, while you still have enough tread, your grip doesn't diminish. Pirelli define their tyre design with working on chemical grip, via a rubber compound, and mechanical grip, via tread design. So even with tread wear, your chemical grip is still going to be the same with a Pirelli Scorpion. Some tyres shred their softest layer of rubber pretty quickly, leaving quite basic rubber for the rest of the time. When riding Pirelli Scorpion tyres last year, I was very impressed by the long lasting tread and consistent grip. 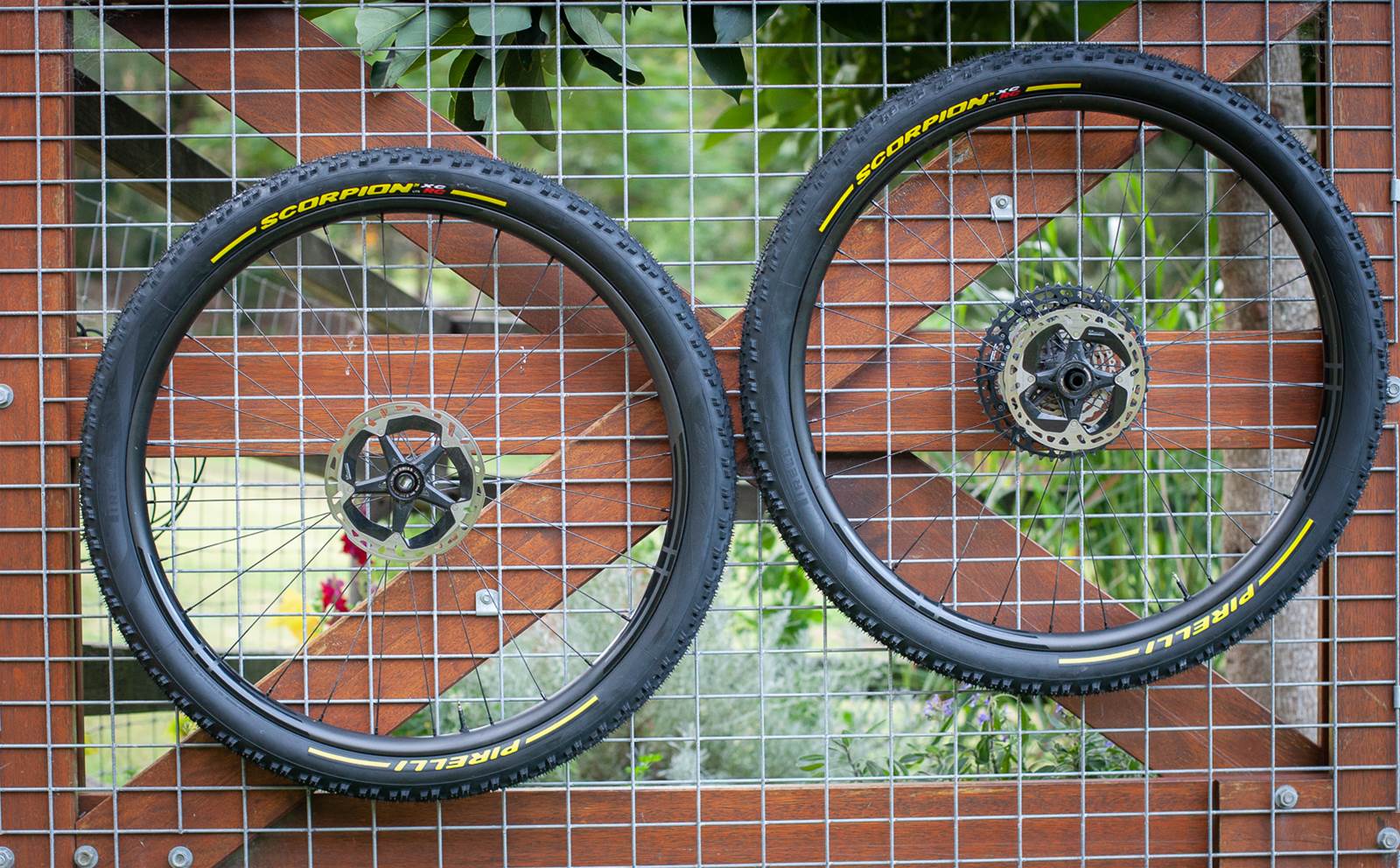 Mounted up and ready to roll.

I settled on 18psi in the front, 20 psi in the rear on the ProWall model, and bumped that up one psi per end for the LITE model. The tyres held pressure really well with some Ride Mechanic Hoop Goop sealant in each tyre.

Save for the occasional digression, I have mostly been riding 2.35” or 2.4” tyres on my cross-country bikes for the past 18 months. I really enjoyed riding the 2.2” Pirelli Scorpion XC RC tyres in the dry Brisbane winter last year, so seeing the same model in the 2.4” casing was good news.

I typically run a more aggressive front tyre with a faster rear tyre. I've done this for over 20 years, as it just seems to make sense for how I ride. Let me state again that the Scorpion XC RC tyres are a very fast tread, aimed at use by riders who really know what they're doing on a cross-country or marathon race course. Despite that, I found them fun and fast on my local trails and long rides into Brisbane Forest Park and beyond.

The rolling speed of the XC RC tyres carries on from the narrower models, thanks to the closely spaced centre tread, and the rubber that isn't a super tacky compound. I even found the rear traction to be better than something like a Maxxis Aspen or Rekon Race on steep climbs with some fine rock over hardpack, with the tread finding more grip, letting me clear some steep pinches that I don't tend to get up otherwise.

On descents, you will be rewarded for reading the trail in advance. Last minute decisions which need more grip from loading the tyre up are not the same compared to a beefier tyre, and you shouldn't expect it to be. The LITE casing can feel a little squirmier when loaded up given it has less sidewall support, but it depends on the pressure you run at it. If you run it a little lower, you have one of the most supple mountain bike tyres I have ridden, which is fantastic on rougher trails as you're climbing, as the tread stays stuck to the ground for grip. But if you'll be descending rutted trails or using features to change direction, you'll want higher pressure or the ProWall variant. 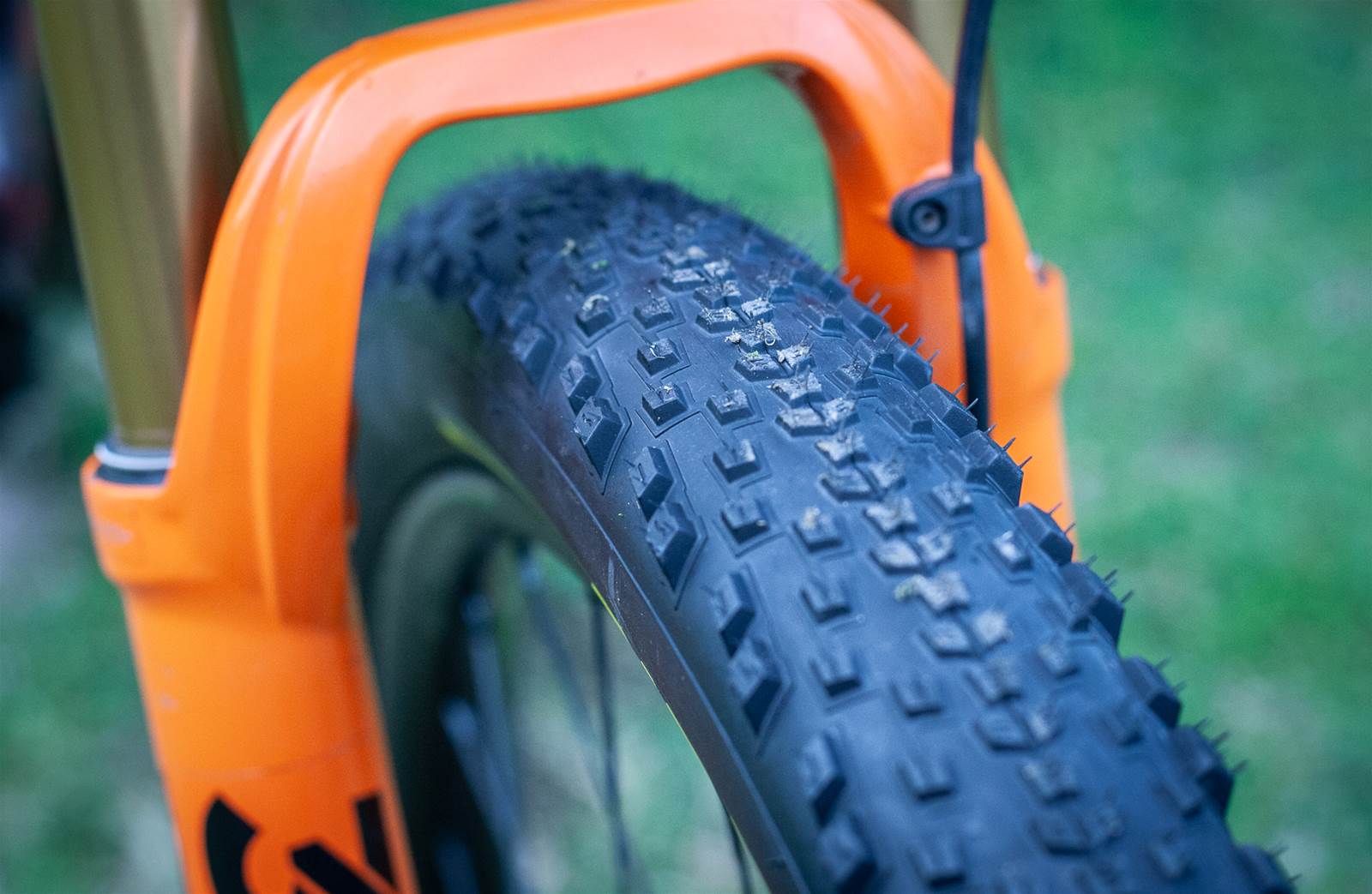 The XC RC on the front is best suited to an experienced pilot or rider prioritising speed.

I had no damage to the tyres, or flats, and that's the same as with all the Pirelli Scorpion tyres I rode in 2.2” and 2.4” last year. While these are racing treads, given the long-lasting tread wear and durable casing, I wouldn't consider them race day only.

The Scorpion XC RC sit apart from the conditions specific Scorpion range, but I think it would be a mistake to think they can't mix. The XC RC in 2.4” is an ideal addition to the range, and in either casing option they would suit an experienced rider looking for a fast and durable tyre that isn't going to weigh them down. Of course, you could opt to put a Scorpion Hard or Mixed conditions tyre on the front to gain a bit more traction in looser corners, although I would be happy lining up at the majority of Australian marathon races or stage races with these tyres on my bike. While the price is a little higher than some popular tyre brands, the durability is much higher, and I think that is well and truly worth price difference.