Shorter cranks have been favoured by gravity athletes for some time. Should you be considering them too?

There are plenty of riders out there happily spinning the cranks that came on their bike. These people might not even know the length of their cranks. On the other end of the spectrum are people like me, who line up a set of cranks in their preferred length prior to any new bike purchase.

In both road and mountain across most disciplines and sizes cranks come in 165mm, 170mm, 172.5mm (less common in MTB), and 175mm lengths. Sometimes a brand will spec the same length of crank across an entire range. More often, smaller sizes will use a shorter crank (165mm or 170mm), while larger sizes will use a longer crank (175mm). 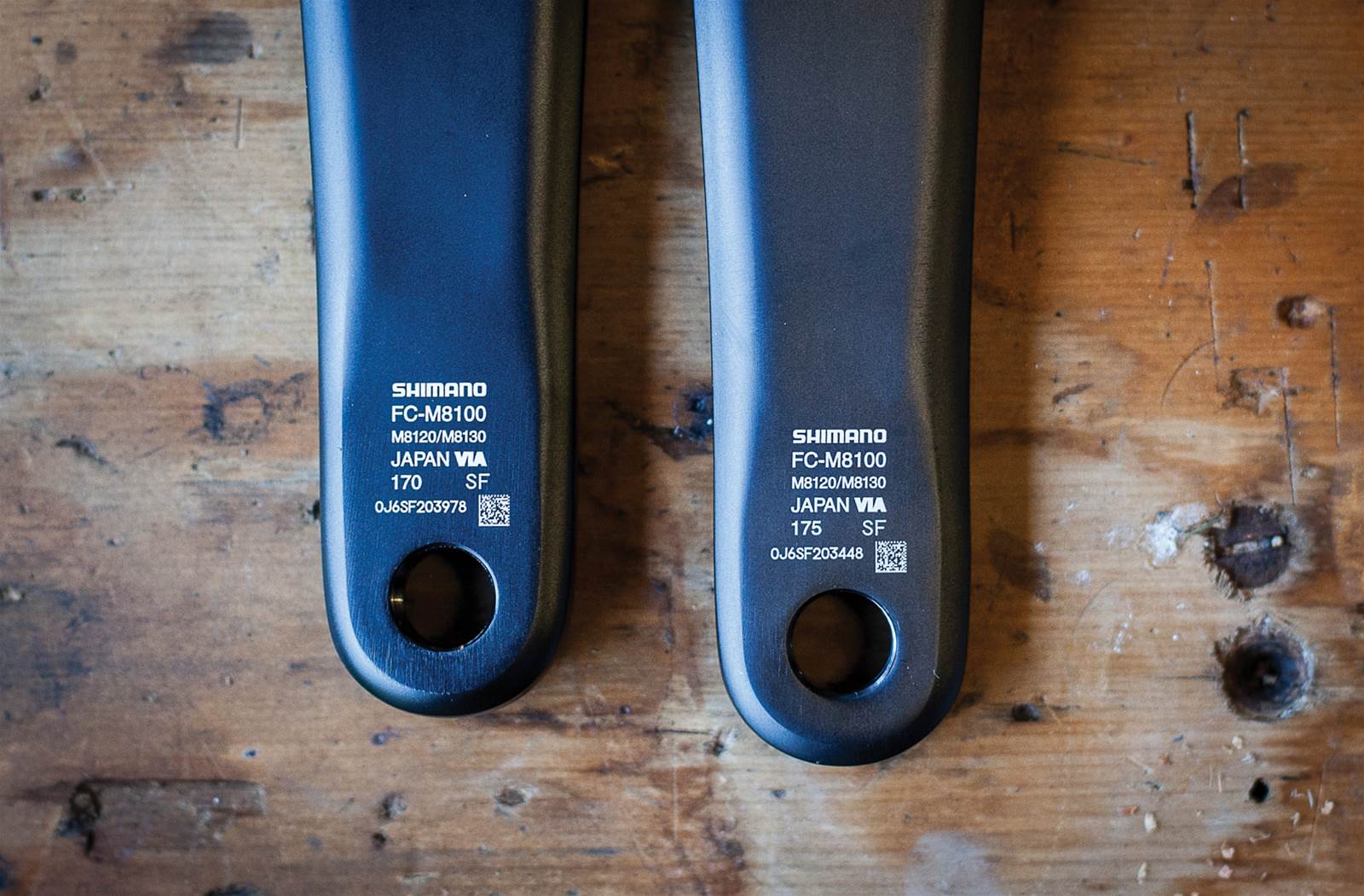 Why does crank length matter?

There are a few arguments for longer cranks, for example 175mm. The first is that they’ve worked fine having been specced on mountain bikes for decades. Secondly, they’re claimed to provide additional leverage, which is particularly useful from a standing start, steep terrain, or a situation where peak power is required. Whilst the longer lever length giving increased leverage sounds irrefutable, a number of studies suggest the increase in leverage and/or peak power between a 175mm crank and a shorter crank is negligible in many cases.

Despite these studies, when you speak to top racers in the cross-country disciplines, many of them are still firmly in the 175mm camp when it comes to cranks. Jon Odams is one of Australia’s best multi-discipline riders, so he’s the perfect person to speak to about crank lengths across various disciplines. According to Jon, athletes at the top of cross-country racing who’re putting out big power definitely benefit from longer cranks.

‘I’m pretty sure most of the guys I’m racing against are on 175mm cranks. They’re strength and power-based riders and the longer cranks play to their advantage. I run 170mm on the cross-country bike as more of a technical rider, which plays to my strengths.’

Jon says that for cross-country racing the dominance of 175mm cranks shows they’re probably the faster choice for elite riders in that discipline.

‘Racers need to run what’s fastest. I’m sure the people I’m racing against have tried shorter cranks, but on race day they’ll run the fastest choice no matter what. While shorter cranks give you more ground clearance and you can spin a higher cadence, I think you’d lose too much leverage if you went for 165mm cranks for example on an XC bike.’

Whilst cranks varying from 170mm to 175mm have been the norm in most mountain biking disciplines forever, shorter cranks are becoming more and more popular.

Benefits of using a shorter crank include increased ground clearance, which is much appreciated on modern mountain bikes with low bottom bracket heights. Another benefit is the ability to spin a higher cadence, which some studies suggest results in less force through your joints. Jon says that he thinks shorter cranks make plenty of sense on everything from trail bikes through to enduro race bikes.

‘With modern geometry and lower bottom bracket heights, I choose 165mm for my enduro bike. I’m currently on 170mm for my trail bike, but I’d be interested to try 165mm. I think it’s a case of what you’re riding really, if you’ve got lots of steep climbs then the longer cranks’ extra leverage definitely makes riding more bearable. If you were living in New Zealand where they grade their fireroads at pretty mellow percentages than the benefits of the shorter cranks would outweigh the increased leverage.’ 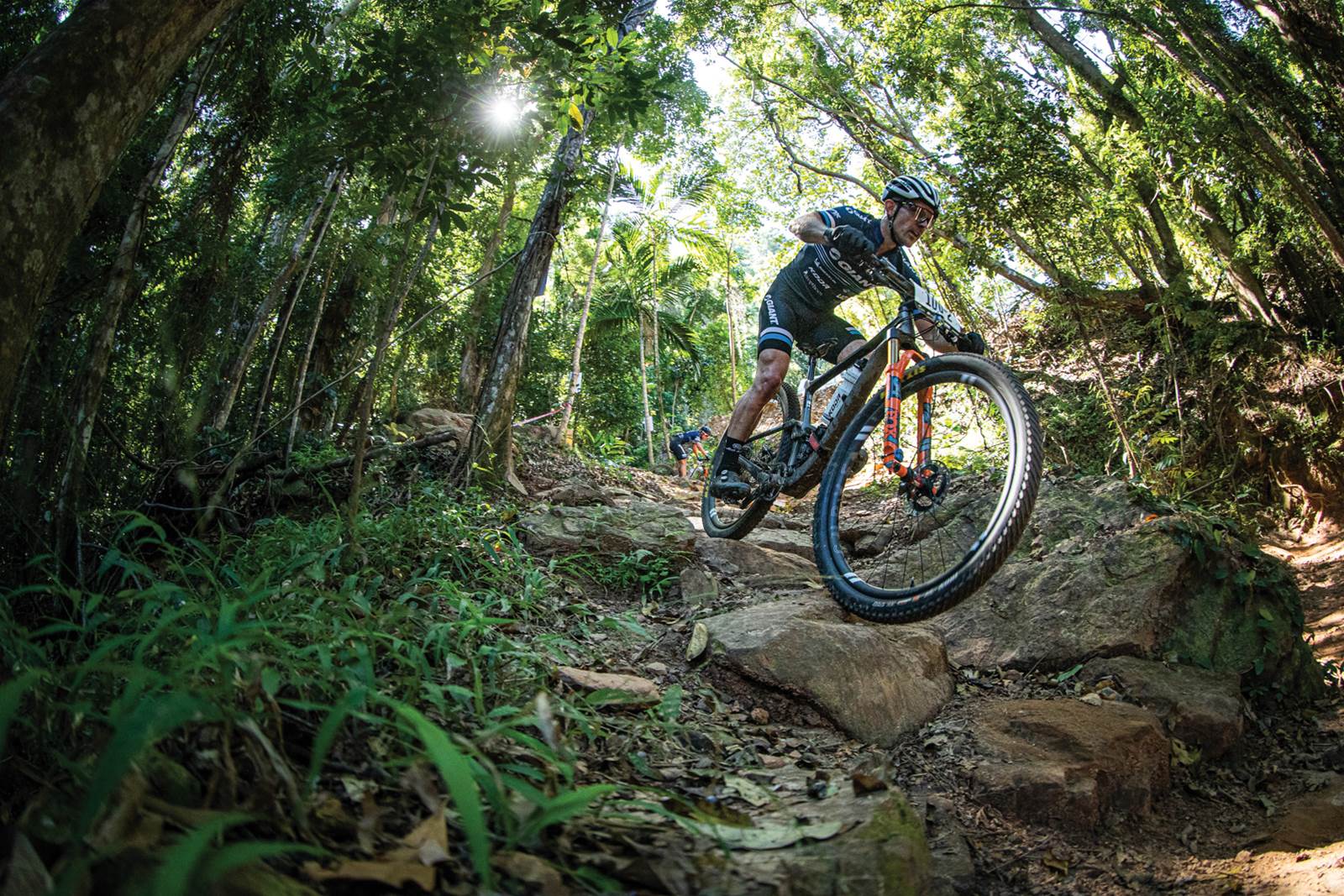 Jon Odams is a deep thinker when it comes to crank length.

An increasingly popular reason for switching to shorter cranks on both mountain and road bikes is the lower range of motion requirement to complete a full pedal stroke. This is because your hip angle isn’t as tight at the top of the pedal stroke using a shorter crank. According to some studies, a tighter hip angle can impede maximal power and also contribute to discomfort or injury in a number of areas (knees and lower back to name a couple). As a result, a number of bike fitters use shorter cranks to assist riders with limited range of motion, as well as in a number of other areas.

eMTB is a discipline that’s seen shorter cranks introduced from the outset. The primary reason for this is the increased clearance a shorter crank provides. On an eBike this is both necessary for the technical terrain you can climb, as well as the increased speed you’ll be climbing at. For these two reasons, a pedal strike when climbing on an eBike is therefore far more likely to result in a dismount.

‘It makes sense to go shorter on an eBike. You get more clearance, you’re going faster, and the leverage is irrelevant with the help of the motor. All of the current Giant eBikes come with shorter cranks, the longest crank length is 165mm.’ I’m running 165mm cranks on my eBike (which came specced as standard). Whilst I don’t pedal strike often, it does happen occasionally, and I’d love to try shorter cranks (160mm or even 155mm) to compare the difference. eBike cranks are offered in quite short lengths, for example Portuguese brand Miranda makes eBike cranks in as short as 150mm!

Downhill bikes have used shorter cranks (usually 165mm) for a long time due mainly to their increased clearance for pedalling through rough terrain. There’s also the argument that a shorter crank is stronger, although I’ve been told by multiple manufacturers that the difference wouldn’t be an issue for the average rider.

Should I be running shorter cranks?

With bottom brackets getting lower and lower, there’s definitely an argument for all-mountain and enduro bikes coming with 165mm cranks as standard. Another benefit to shorter cranks for modern bikes is the ability to run a longer dropper post. These two reasons, alongside the increased cadence that the shorter cranks allow are what I enjoy about running 165mm cranks on my personal bikes.

Aside from my personal opinion, if you’re currently running 170mm or 175mm cranks with no clearance issues or bike fit discomfort than there’s probably no reason to change. On the flip side, if either of those things are an issue then a shorter crank could be worth a shot. If you’re experiencing pain or discomfort through your pedal stroke, visiting a reputable bike fitter is a good option to assess all the areas that can be addressed in terms of your fit on the bike.

Whilst gravity-oriented bikes are more likely to come with shorter cranks at present, my opinion is that we’ll see more brands speccing shorter cranks as standard across a number of disciplines in the years to come. 165mm cranks are no longer exclusive to downhill.