An unprecedented Swiss podium sweep at the Tokyo 2020 Olympics.

The Olympic mountain bike events closed out with the women's cross-country race in Izu, Japan, and the conditions couldn't have been more different to the men's race the day before. While Thomas Pidcock rode an attacking race to win Gold in hot, dusty and humid conditions, the field of 38 of the world's best women cross-country racers had storms and rain to contend with.

With red dirt turning to mud, the highly challenging course quickly became a different beast, with muddy tyres tracking slippery mud onto the huge features like the boulders and logs. Less than three hours before the race, a communique was released announcing some A-lines would be closed off, and the training ramp on the Sakura Drop would be fitted. 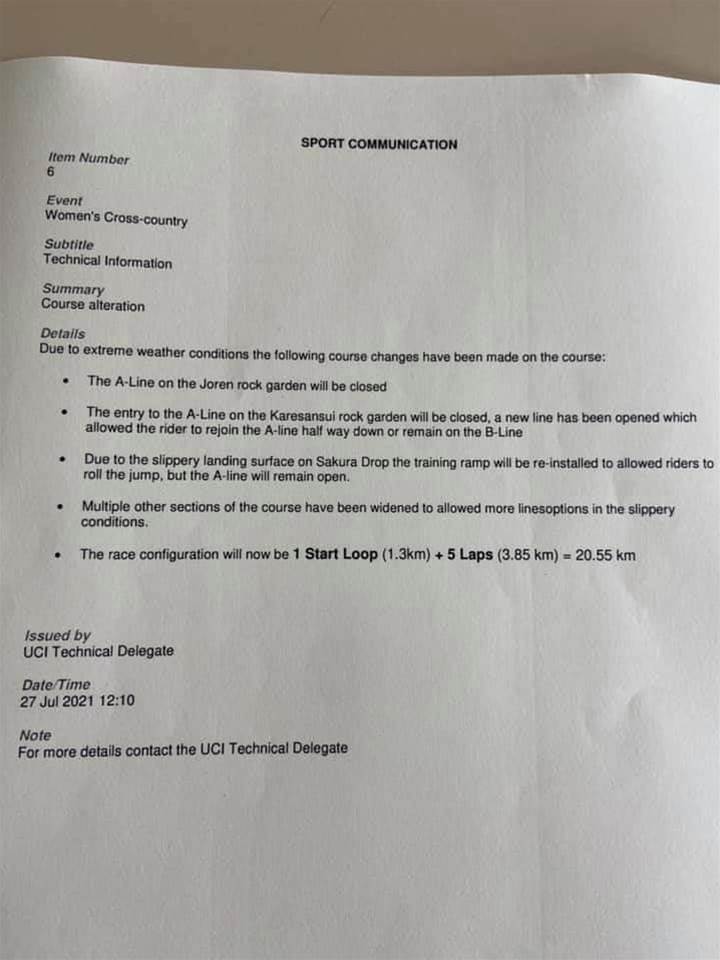 With Bec McConnell ranked 3rd in the world, she had a front row start

The race took off and as in the men's race the start loop proved to do the opposite of spacing it out, bunching people up and forcing the majority of the field off their bikes.

LeComte was leading with Laura Stigger right behind. but as the first lap started Jolanda Neff had moved into the lead. There was some elbow action between LeComte and Ferrand-Prevot on the next climb. As Neff lead into the Wasabi climb she came unstuck and PFP was right there.

These two ended up leading - just - with Neff trying some agressive passing moves to pass PFP on the Sakura Drop! This had the ramp back in due to the mud - although on the screen the conditions did look pretty good.

PFP crashed on the rocky ramp up to the road, falling backwards down the course, and losing time. She lost the advantage and Neff was alone at the front with a 13 second lead.

Then, three Swiss riders were in the top 5 with Frei and Indergand as Neff lead. LeComte was in 3rd, chasing, while Richards was 2nd. Into the second lap Neff had a 19 second lead.

The course looked heavy, but not sloppy, making a completely different course for the women. Rissveds was falling back, looking less likely to repeat her Gold from Rio. She was in 10th into the second lap.

The Swiss team looked to be in control of the race, different to the elbow work from PFP and LeComte. Neff looked balanced at the front, but what could change?

LaComte has won every World Cup this year, but back in 6th she was chasing, behind Neff, Richards, Indergand, Frei and Tauber. And PFP was chasing. At this point, the race was a Swiss master class.

Still, Loana could nail the Wasabi climb sharp uphill right hand corner, while others were still unclipping. 20 seconds wasn't a big gap. Could she close it?

The thing is, Neff's gap was growing, out to 47 seconds! But the chasing group was growing as Tauber from the Netherlands joined them.

The Swiss dominated the front of the race, with Frei in 2nd and Indergand in 3rd. And then, PFP started to catch up. Neff was storming out the front, but PFP was coming like a tiny, dimpled freight train, moving into 2nd place at the start of the 3rd lap. LeComte was back to 8th.

PFP was chasing, but with almost 50 seconds to Neff - what could be done? With about that time lost crashing falling backwards, it's clear PFP was moving about the same speed as Neff. Frei and Indergand was just seconds behind PFP. Could the Swiss fill the podium?

Bec was back in 16th, as so many other favourites got caught out on the course and conditions.

Neff was riding her own race, not unlike the 2017 XCO World Championships in Cairns, with a gap that she kept increasing by nailing every line.

Terpstra and Tauber were wheel to wheel for the Netherlands, and Evie Richards was dropping behind - but the race leaders continued to extend as they beat the conditions and therefore the other riders.

At two laps to go, Jolanda Neff had enough of a lead to say it was commanding. Sina Frei was in second at 1:09 back and with Linda Indergand in 3rd at 1:15. The fight with Lecomte, Evie Richards, PFP and the dutch riders Terpstra and Tauber was much closer than the race for Gold.

The course is full of boulders, and clearly drying fast. Sure, different conditions to the men's race but improving. And Jolanda Neff's ride was an exhibition of mastery. Close ups of the rocks on the coverage showed the mud covering them, and while it's easy to say the conditions were better, no doubt they were still terribly challenging.

Courtney, Rissveds, McConnell - none of them were in the picture as the Swiss were out in their own race. PFP was riding in 8th, but with two laps to go it was clear she wasn't going to end the way she wanted. She sacrificed so much for this race, but on the day a couple of mishaps didn't play in her favour.

On Lap 4, LeComte was over 2 minutes back from Neff. The flying Swiss still hit every line aggressively, riding with no signs of fatigue. Indergand and Frei were swapping the lead of the chase for silver. The Swiss frequently train as a national team, and this race was a perfect example of how that works. Were they now left to race each other with Neff away? We can't be sure, but the combined effort clearly produces the results.

Coming into the final lap, Neff had a commanding lead, and Sina Frei and Linda Indergand were in the Silver and Bronze positions. Of note, the top 5 were all on full-suspension bikes with dropper posts. 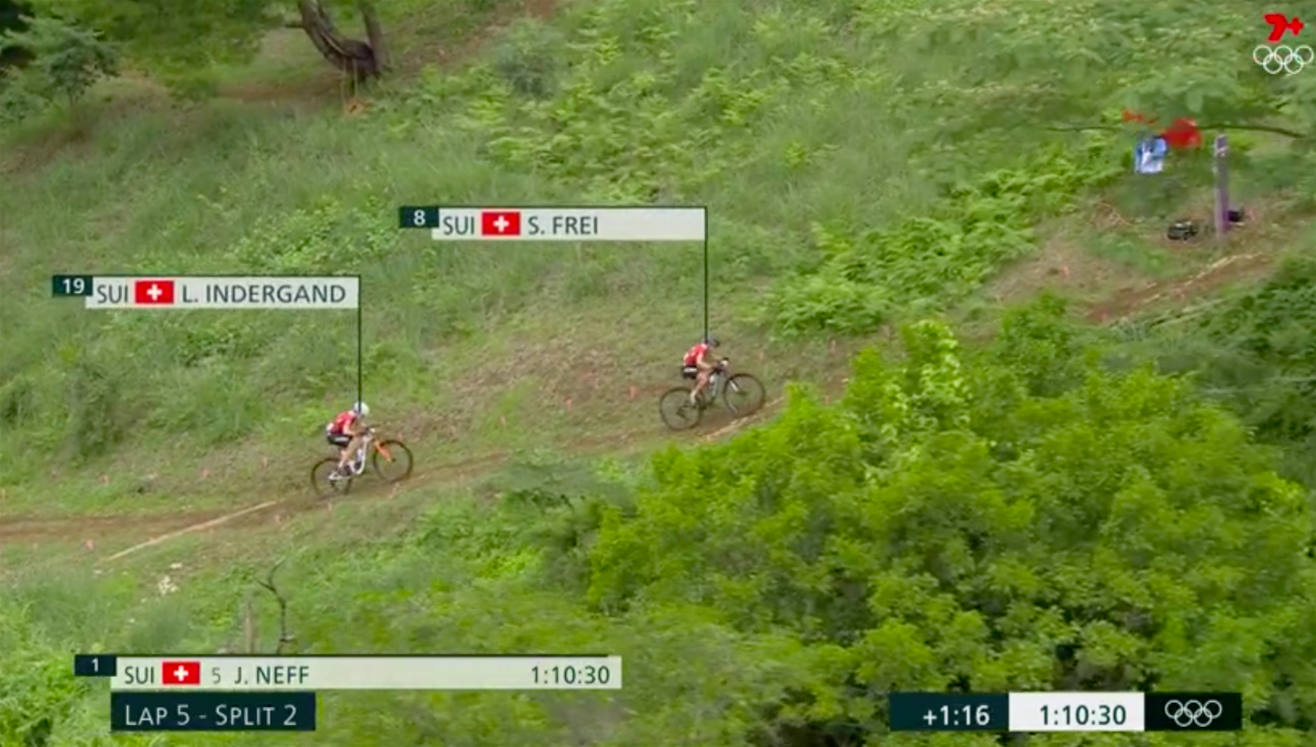 Vas from Hungary was riding through the field and into 4th. Passing PFP, LeComte, Tauber. At the age of 19 and still riding in the U23 category, she showed her huge talent. But over 30 seconds to bronze on the final lap would look unlikely.

There was no touching Jolanda Neff, riding towards the finish line with an amazing lead. The 28 year old Swiss was 6th in Rio, and came in for Gold in Tokyo. Sina Frei was second, with Indergand in 3rd. This was an unprecedented result, with Switzerland taking every medal available. Vas was 4th, Terpstra 5th, LeComte 6th. We expect to see a lot of her in Paris 2024. McConnell was 28th, with a number of others lapped out or DNF.

This was yet another example of an amazing race to watch, with results that won't be forgotten. Rissveds finished in 14th, not what she would have expected or anyone else. The hugs, tears and smiles at the finish line spoke volumes of the elite women's race scene. So supportive, yet highly competitive.