The trail to Tokyo hasn't been without huge challenges for every single rider. The process of qualification is hard fought, and that's without the complications and uncertainty of a global pandemic thrown into 2020, which has truly shaped the Tokyo 2020 Olympic experience for any athlete, official or volunteer involved. As we have seen in the events so far, everyone brings their A game to the Olympics, and the men's Olympic Cross-Country was no different.

38 riders from around the world lined up on the race course on 26th July, at 3pm local time. The 4km has 180m of climbing, and no shortage of huge, man-made features. From boulders dragged into the forest to make rock gardens, to huge rock gardens with chasms and drops in the grassy fields, and the fallen log piles that seem to be a favourite of the course designer.

Before anyone was on the start line, the list of outright favourites had a mix of national pride and wow factor. Would GB's Tom Pidcock ride away from everyone? Could Mathieu van der Poel drop a huge wattbomb to make a gap? Or would defending Olympic champ Nino Schurter switch into top gear and come out on top? Of course, his compatriat Mathias Flueckiger is in form with two World Cup wins, and of course Brazil's Henrique Avancini is always so close to another major win.

From the start, Henrique Avancini moved to the front, and on the 1.3km start loop, as the bunch lead over the first tech climb at least 70% were off and walking already with congestion.

There were few options for passing after that, and into the first lap Avancini was still leading with Schurter and Flueckiger close. Off the largest drop, Mathieu van der Poel made a mistake and had a huge crash! Tom Pidcock narrowly missed him. Van der Poel got up, but had been down for a minute.

In the second lap, Avancini faded (as he does) and Schurter moved into the lead with Vader in tow and Flueckiger on his wheel with Pidcock also there. Anton Cooper from NZ was in 7th and moving in.

On the next laps Pidcock attacked, and built a gap. Flueckiger could start a chase and in time was solo behind Pidcock. Schurter and Cooper were behind, and in time Ondrej Cink caught up, along with Victor Koretzky. Cink moved up into 3rd but then had a flat and broken wheel.

Pidcock stretched his lead to 20 seconds as Spaniard David Valero moved to the chase group and in front of Schurter, Cooper and Koretzky.

Conditions were taking their toll, with the heat and high humidity mean the riders wered ropping in sweat and trying to get fluid in, or on them, through the tech/feed zone.

David Valero came into the bronze medal postion, with Schurter and Cooper chasing. There's not places to move up in much of the singletrack. It's either huge boulder fields, or off-camber red dirt and roots. The course is not well ridden in, it's pretty raw in the trees - and steep!

Pidcock had over 20 seconds with half a lap to go, after about an hour and twenty minutes of racing. The course doesn't let up, and concentration had to stay high for all riders. Koretzky slotted himelf into 5th behind Schurter with Cooper in 6th. This was the race to catch Valero. But no one was catching Pidcock.

The race for bronze was on, and Vlad Dascalu (Romania) was bringing Cooper into sight. The battle for bronze was getting serious! Flueckiger was still hard on the pedals, about 21 seconds back, working hard to see how it might pan out.

Pidcock entered the finish straight solo, with time to grab a flag, and cross the line victorious. Mathias Flueckiger came in second, with Valero pipping defending champ Schurter for the bronze. Victor Koretzkt out sprinted Anton Cooper for 5th and Vlad Dascalu was 7th.

This was a brutal race, with the course taking out two favourites (van der Poel and Cink) but also finding a true winner. Pidcock had an attacking ride and clearly was the strongest. As a professional road racer, does it take anything away from mountain biking? Probably not. Pidcock says he was born to race mountain bikes, and this result (amongst his World Cup results) proves he is right.

The rest of the field came in solo drabs. No one left anything out there. Dan McConnell finished 30th on the brutal course in Izu. The women's race will fall on July 27. 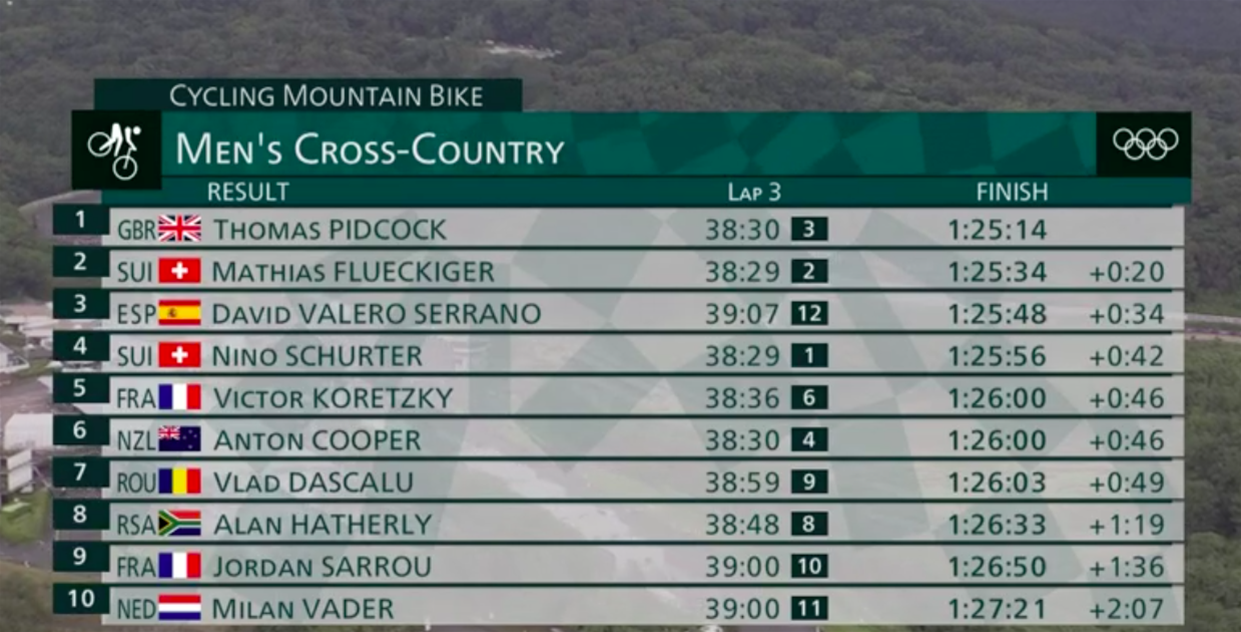