The National XCO Series kicked off in Orange this weekend, with strong elite fields battling in Kinross Forest.

The MTBA National XCO Series started with a bang in Orange this weekend. For the 2017/2018 season, Mountain Bike Australia (MTBA - now a recognised sports organisation) have put on 4 event weekends, with two rounds each, plus the National Championships in Armidale.

So with two rounds of UCI C3 racing on offer, the start lists for the first two rounds in Orange looked likely to fill out - and they did. With only a few abscences from the elite start lists due to innjury or season timing, this looked to be one of the healthiest starts to the National Series in years. We took a look at the Specialized Epic S-Works that Samara Sheppard was racing.

The races were held at Kinross Forest, on the outskirts of Orange. The trails are traditional pine forest. Lots of sweeping corners, some rock or log rollovers, and plenty of roots. With a lot of a rain the week prior, the trails had settled really well but the weekend would a a story of dust more than hero dirt. For many, Saturday was the first real chance they would have for this season to see how their form was going compared to their competition. There have been state rounds, Cape to Cape, road tours and more for comparisons - but for the majority of riders it's not until they line up in an Olympic Cross-Country race with an elite field that they really know where they stand.

Elite women were first to hit the dirt and New Zealander Samara Sheppard (who we are likely to claim as our own if soon enough if she keeps on living here) and Holly Harris were quick to move away from the field. In time it was Samara Sheppard who edged away from Harris, with Kathryn McInerney in 3rd. Although in the U19 women's race (starting at the same time) Zoe Cuthbert was holding 3rd on the track - although her race is also shorter it's a great sign of elite talent lying in wait.

The elite men's race was held in the heat of the day at 2:30pm, and with a strong field of elite men and Junior men starting just behind them, the course was a cloud of dust. Ben Bradley was first to the front but in time it was Cam Ivory who piloted his bike to the front of the race and didn't look back. With a lead that he worked to increase each lap, the only thing changing was the positions behind from the 2nd lap. With Bradley in 2nd it was Tasman Nankervis in 3rd, with brother Russ ending up in 4th after Michael Harris had a crash. Ben Henderson moved into 5th. Full results are online. 2020 All-Australian Squad: Who made the cut? 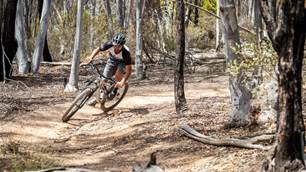