The gruelling eight-day Cape Epic mountain bike race in South Africa will bring you undone, but at least the scenery’s pretty.

The gruelling eight-day Cape Epic mountain bike race in South Africa will bring you undone, but at least the scenery’s pretty. 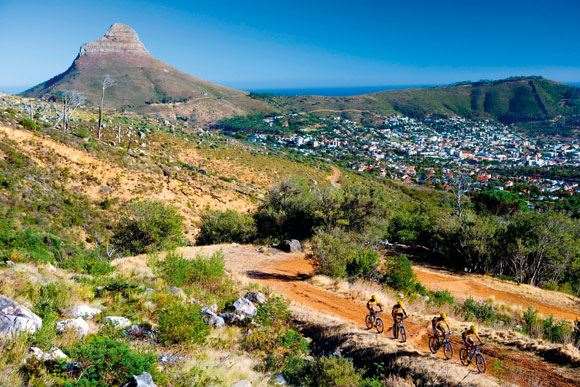 The Cape Epic is a team mountain bike race through South Africa’s Western Cape region designed, it seems, by Austin Powers’ Dr Evil. Check these numbers: over eight days riders cover 685km, during which they climb a total of 14,663m. (FYI, Mt Everest is a mere 8850m above sea level.)Teams consist of two riders, who must remain within two minutes of each other; competitors carry transponders to ensure they adhere to the rules, and there are random checkpoints. This makes the Cape Epic the largest and most gruelling full service mountain bike stage race in the world. The scale of the event ensures a quality field: Olympic, World Cup and national champion riders are spread across the four categories (mixed, male, female and masters).With entries capped at 600 teams (1200 riders), what’s a veterinarian (myself) and a hairdresser (my partner, Andrew Davison) from Noosa doing on the start line of such a prestigious event? Amateur riders enter via a lottery system, but we made it in by luck: Andy and I (pictured below) took a couple of South African locals (Cape Epic veterans) on a tour of the hills around Noosa last Christmas. Six weeks before the Epic we got a phone call to say they had an entry for us. Plane tickets were rapidly booked … We were there, with our daily diary.

The prologue morning is dark, chilly and nerve-racking. All 600 teams start at 20-second intervals over a 19km course up the side of Cape Town’s famous Table Mountain; we’re down for 0725. Andy, in typical testo-fuelled form, rides strongly from the start while I lag a little, trying to retrieve my heart from my throat. The climb continues into the National Reserve and several long minutes pass before we crest and are rewarded by a steep, gnarly, loose descent.There’s minimal recovery time before we hit another switchback climb, averaging 15 per cent toward Dead Man’s Tree, approximately 400m up the side of the mountain. The view from the next crest is painfully stunning: Cape Town, the coast, Green Point Stadium (the 2010 soccer World Cup venue). The downhill trip that follows has us white-knuckling our way to the finish over a loose, rapidly-descending dirt road complete with concrete speed bumps, a few steep pinches and a single track home. We place 14th in our category (mixed).

We’ve been warned. The first stage is notorious for being the toughest leg of the Epic. But 2009 will be nominated the toughest stage in the history of the event. The gun is fired in the seaside town of Gordon’s Bay. We ride through village streets lined with spectators and supporters, then climb a bitumen road to Steenbras Dam (550m altitude, ten kilometres) before smashing down undulating dirt trails at mind-numbing speeds towards Nuweberg. Andy and I climb well and fight to remain in contact with the top 50 riders, but the next climb (Groenlandberg) blows me apart. The five-kilometre ascent starts at eight per cent on a loose, rocky, rutted trail; Andy supports me with the occasional push, until the gradient becomes friendlier and we reach the top to be greeted by a descent of around 15km: big rocks, holes, thorns and heaps of crazy lines go on and on and on while every bone in my body is shaken loose. The final 30km to Villiersdorp peters into insignificance by comparison; needless to say we’re well and truly smacked when we finish, 13th in category.We’re greeted by Mike Mic (the voice of the Cape Epic) across the finish line and enter an oasis of mobile showers and toilets, rows of tents, coffee van, mobile bar, food stalls, medics, massage tents, soft serve ice cream, twisty potato chips on sticks … The set-up is truly amazing: every recovery tool can be accessed within walking distance of the finish line. We grab our luggage, snag a tent each, shower, get massaged, wash and rack our bikes and then make a bee line for the bean bags in the chill zone for sweet recovery time. At around six each evening the grand marquee opens its doors and we’re fed by legions of friendly locals in green shirts and hats. The organisation is outstanding. Sleep follows dinner and the routine of stage racing becomes entrenched.