Looks like a hardtail but does battle with rough trails like a full-sus frame. Chris Panozzo puts the Trek Supercaliber through its paces to figure out exactly what it is

The 2021 Trek Supercaliber 9.8 is a very neat bike, aesthetically and practically. There is an untold level of excitement and satisfaction on picking up a new bike like this at your local shop. And despite the move to contactless transactions and direct to consumer purchases, I don't think the feeling of collecting a new bike from the shop, where the staff are as stoked as you, will ever be replaced.

The Trek Supercaliber has very clean lines no matter which way you look at it, from the straight downtube to the somewhat hidden shock underneath and inside the top tube. The bike has a classically shaped frame we can all recognise from some point in our own lives, two opposing triangles situated between a set of wheels with a seat in the middle. Yet the Supercaliber is far from a classic, with its flexible rear seat stays, the bike looks like a hardtail from years ago but behaves like a modern-day gladiator ready to take on today’s battles. But what those battles are, and what comes with this bike are sometimes at odds with each other. This bike was designed with one conflicting purpose in mind. Ride like a hardtail and a full suspension bike at the same time, not an easy task set for any aspiring engineer, let alone the old guard in Wisconsin, the home of Trek USA. I’m not going to go in depth about the ISO strut and flex stays, as this is the second year of production and nearly every other article and video has covered it enough already, save for the fact is has about 60mm of rear travel. I say about because that is a direct quote from Trek, with 55mm of travel coming through the “Isostrut” or shock in layman’s terms, and 5mm of travel coming from flex in the rear swingarm, mostly from the rear seat stays in the vertical direction, not sideways flex, thankfully. With varying rider weights based on bike sizes, Trek committed to making individual swingarms to suit six frame sizes, which to be fair for this bike to work needed to happen. You couldn’t have an XS frame size and accompanied rider put the same energy through a frame that an XL rider could. The bike is way better for it, but I imagine some of that cost is shared back to the consumer, as there is no grouping of manufacturing costs to help drive down the price here when carbon is designed to flex based on weight and energy input. This bike has clearly lots of thought and detail work put in at the design critical stage. It has aggressive geometry for a modern XCO bike, a 69 degree head angle, reduced offset forks,  short 430mm chain stays with an upright effective seat tube angle of 74 degrees.

The fork is Fox Step Cast 32 with 100m travel, which is perfect for the bike in matching matt black with accompanying black graphics. Full disclosure here, I’m a sponsored rider, so I won’t review some of the products in isolation, however I have deliberately not had a frame sponsor for more than a year now, which gives me enough distance to review the Trek as a whole, and Trek’s choice to run brakes from Shimano and drivetrain’s from SRAM do not make for a clean cockpit. Each company makes integrated brake and lever combinations, so to run both means a messy setup for a not-so cheap bike. The bike is built with Shimano XT brakes and a SRAM GX Eagle drivetrain. Neither are the top of the line products from the respective companies, yet the bike costs $8,699.00. That's a lot of money for not much travel, and it’s not the lightest dual suspension bike on the market either, so for that money what exactly are you getting?

Right out of the gate the bike feels alive, not in a way that rattles you like a hardtail but playful and refreshingly honest in the way it asks to go a bit quicker and feel what the trail has to offer. With a remote lever controlling front and back lockout it's easy to split between personalities of the bike, and credit where credit is due to the engineers in Wisconsin, that’s exactly what the bike does. With the suspension open the bike has a continually active suspension platform that feels like it offers much more than 55mm. Why have the 5mm of flex then if the bike feels good at 55mm? According to Trek the less pivots they have the stiffer the frame will be when any lateral load is applied. Sounds strange that in order to make the bike stiffer they let it flex isn’t it. Is it practical in the real world? Yes. It’s satisfying that every now and then the marketing jargon can actually be felt on the trail. In this case the marketing jargon is straight out of the engineer’s book, so it should make sense. After a short amount of riding switching the lockout between full lockout, that is front and back, and fully open I do wish I could control them separately. Having the front locked out and coming across something unexpected is much worse and unsettling when the front is locked out compared to having the rear locked out. This bike is all about a holistic approach to tackling the terrain, a sum of all its parts, so to not have thought through this is a small let down, not a deal breaker in any way, just something to think about, as it turns the bike from not just a hardtail, but a fully rigid bike into a full suspension bike. But when you’re racing XCO, every second counts, so I’m not holding anything against it.

There are a few things that bug me on the build kit, so I'll knock them out of the way now – as I really do like the bike and want to focus on the positives. The Supercaliber 9.8 has brakes that are designed for a bigger bike and are overkill, a heavy drivetrain for what should be a light setup with mixed suppliers which means a noisy and busy cockpit. There is no light dropper post and there are foam XC grips that are meant for only the lightest bikes, plus swept back Bontrager bars and a chain guide. It is frustrating having such an advanced frame hindered by parts spec, and there are obviously other builds in the line-up. But is the ride of the bike worth it. 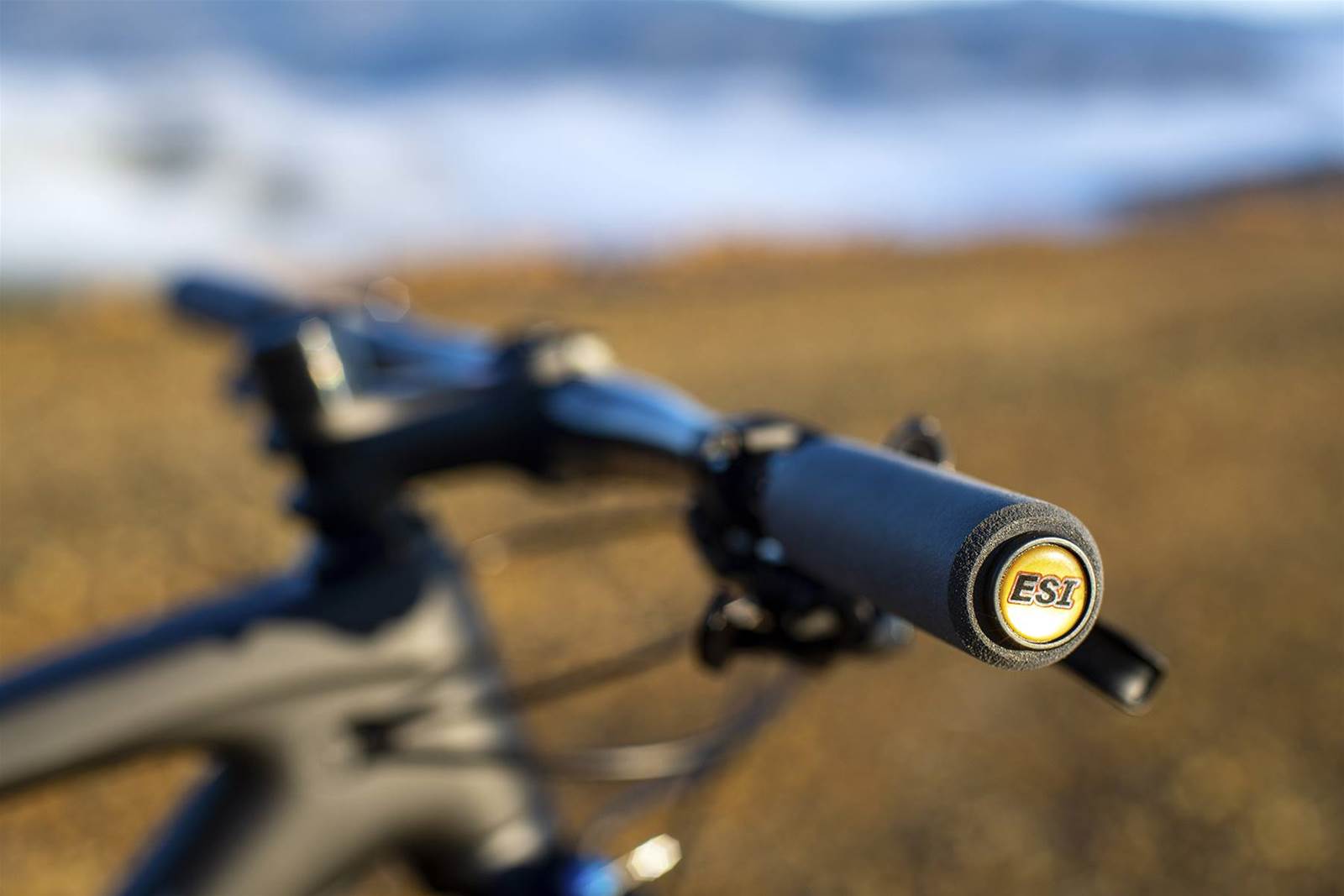 Okay, onto the good things. The bike is very responsive from all the inputs you can give it. Whether it is climbing or descending it feels alive and playful, but not overly so, which is a very hard line to tread. If you make the bike feel too lively at speed it will feel unstable, too calm and it will feel flat and the perceived energy to get moving will be taxing at low speeds. Climbing is where is really does shine. I carried out a few trial runs on my regular routes, and a couple of some simple longer climbs. One that is a regular is an hour-long sustained climb on a fire road straight from town with 750m of vert. Back to back tests with a rest day in-between compared to my regular 120mm trail bike setup as an XCO trainer with the same measured effort, I was a full 10 mins quicker on the Trek, weird build kit and all. Numbers don’t lie, and for those that chase numbers, which is exactly the demographic this bike is designed for, that saving is good news.

The bike comes alive when you push it, the stiff frame set is noticeable without making the bike feel undampened. When descending it doesn’t hold its line as much as you wish it did, but that only applies to high speed sections, which I’m sure if we had a shootout of like minded bikes it would be able to hold its own no worries. It really does work well in lower speed tech sections and allows you to be quite aggressive in how you can attack the corners, which can only come when you are feeling confident in the bike's ability, which isn’t often with XCO race bred machines. The geometry keeps you low yet upright and comfortable for long days in the saddle, with dual drink bottle storage the bike can be ridden much longer than the 90 minutes it was designed for. The bike does exactly what it says it should do on the tin, it’s both a hardtail and dual suspension rig in the one bike. It does make race day choices for XCO and marathon racers easy, and if you were to keep two different bikes for races it is a cheaper option.

If you love XCO racing and always have that doubt whether your old hardtail would be quicker than your new dually, then this is the bike for you. If you want something that has loads of character and makes you excited by how it handles the terrain in front of you even on a long fire road climb, then you will love the Supercaliber. It has classic lines while incorporating some of the newest tech available. My only concern is my perceived need to invest more than the $8,699.00 sticker price to turn the Supercaliber 9.8 into a pure race specific bike. But there are other options in the range that might suit. For those that are out there hoping the bike will make them faster, let me assure you that it will.