Marin Bikes hails from the mountain-biking birthplace in California. A company well-known for shaping the mountain biking industry into what it is, Marin crafted their way into creating performance-minded mountain bikes for the world to use. Initially founded in the late 80s, Marin were amongst the very first brands to ever design a dual suspension mountain bike, or hydro-form aluminum tubes.

Like their other bikes, the San Quentin is named after Californian landmarks – such as the Californian State Prison. Do not fret though, it certainly doesn’t feel like a #prisonbike. Marin’s San Quentin is the bike we all need when it comes to having fun on a hardtail – something that can climb a steep hill, shred the descent, and pop off to the local for a 2 litre jug of skim milk. In Marin’s extensive hardtail lineup, this bike comes in front of a dirtjumper, several trail hardtails, and an adventure bike. If their dirt-jumper Alcatraz and trail bike Nail Trail had a love-child, the San Quentin would be the beautifully-crafted, long-wheelbased, and slack result that would go to become president. 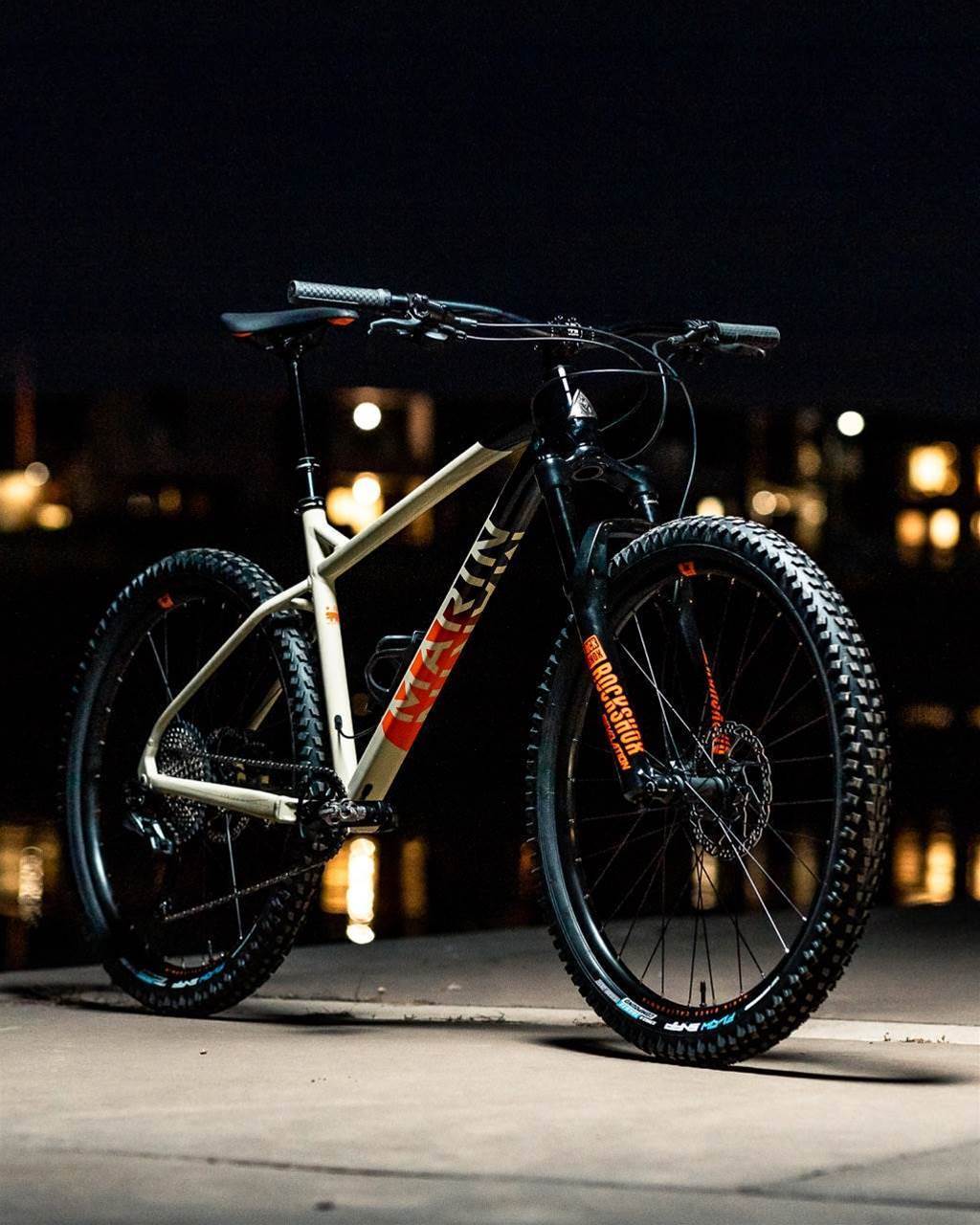 The Marin San Quentin 3 comes well-equipped for the job at hand, with a 130mm RockShox fork, 11-speed 11-46 tooth cassette, 780mm wide bars, a dropper post, and Shimano stopping power. Combine this spec with chunky tyres and slack angles, and you get a hardtail that eats descents for breakfast. With freeride legend Matt Jones behind Marin bars, it’s a no-brainer that the San Quentin lives up to expectations of a ‘party-hardtail’.

If your shed and bike budget allows it, alongside your 29-inched 160mm enduro bike should sit a slack hardtail. Competition is fierce for a hardtail like this, with the Norco Torrent, Trek Roscoe or Commencal Meta AM amongst others vying for your attention. The Marin San Quentin 3 is crafted using Series 3 Aluminium tubes, with more advanced hydro-formed tubes to help drop the weight and improve strength, helping you get up hills and bomb back down them. An abundance of space means a large drink bottle can be fitted neatly in the main triangle, and there is internal cable routing for the dropper post and rear derailleur. Complex dropouts and front and rear boost hub spacing provide a stable feeling, with post mount disc tabs and ISCG 05 tabs keeping the bike modern and ready for getting more rowdy.

Just the look of the bike makes you want to jump behind the bars and point it down a hill. The frame design looks (and feels) seriously slack, with the sleek paint job looking fast straight out of the Bicycles Online box. All we had to do was fit the front wheel, dropper, and handlebars before some chain length fine-tuning and we were tyres on dirt for the San Quentin’s first ride. Despite looking slack, sleek, and fast straight out of the box, the spec stood out to us the most. An absolute bang-for-buck bike with a 1x11 speed drivetrain and huge SunRace 46 tooth granny gear, solid wheels and tyres, wide bars and super-short stem, all alongside a RockShox Revelation Solo-Air 130mm fork. The parts might not be the nicest in the industry, but without selling a liver on the black market, you can get an impressive setup for maximum fun. Between the snappy Shimano shifting, and the 780mm wide bars combined with a 35mm long stem, is a 150mm cable-driven dropper from X-Fusion. 2.6 inch-wide tyres combined with home-brand wheels offered plenty of grip, and were both tubeless compatible. 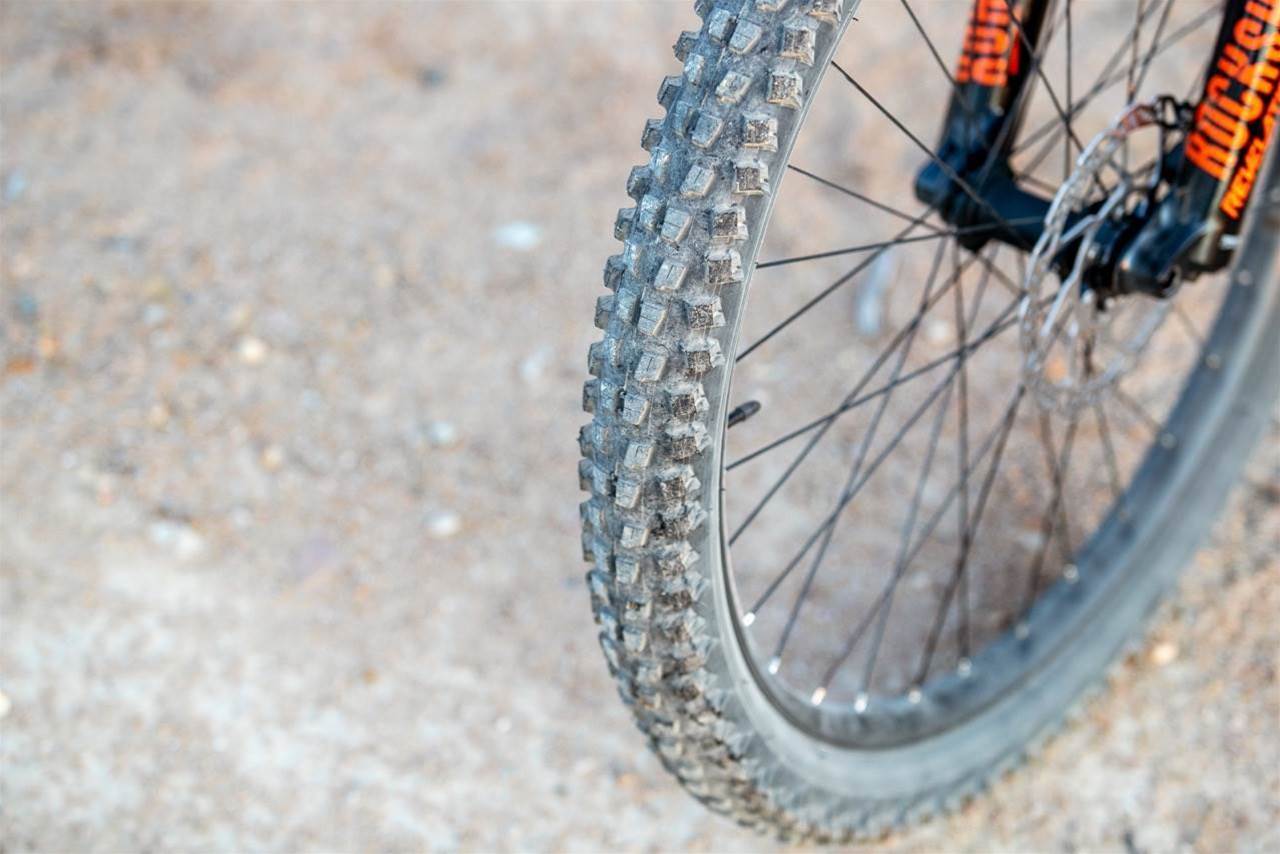 Following on from piecing together the three-part puzzle out of the box, setup was relatively easy. We slid some spacers underneath the stem to raise it up for my super tall self, and aligned the brakes, shifter, and dropper lever so it was comfortable. We pumped about 80psi into the air fork, which is a little softer than I’d normally run, however helped take some of the hits off the body when pressing the send button. 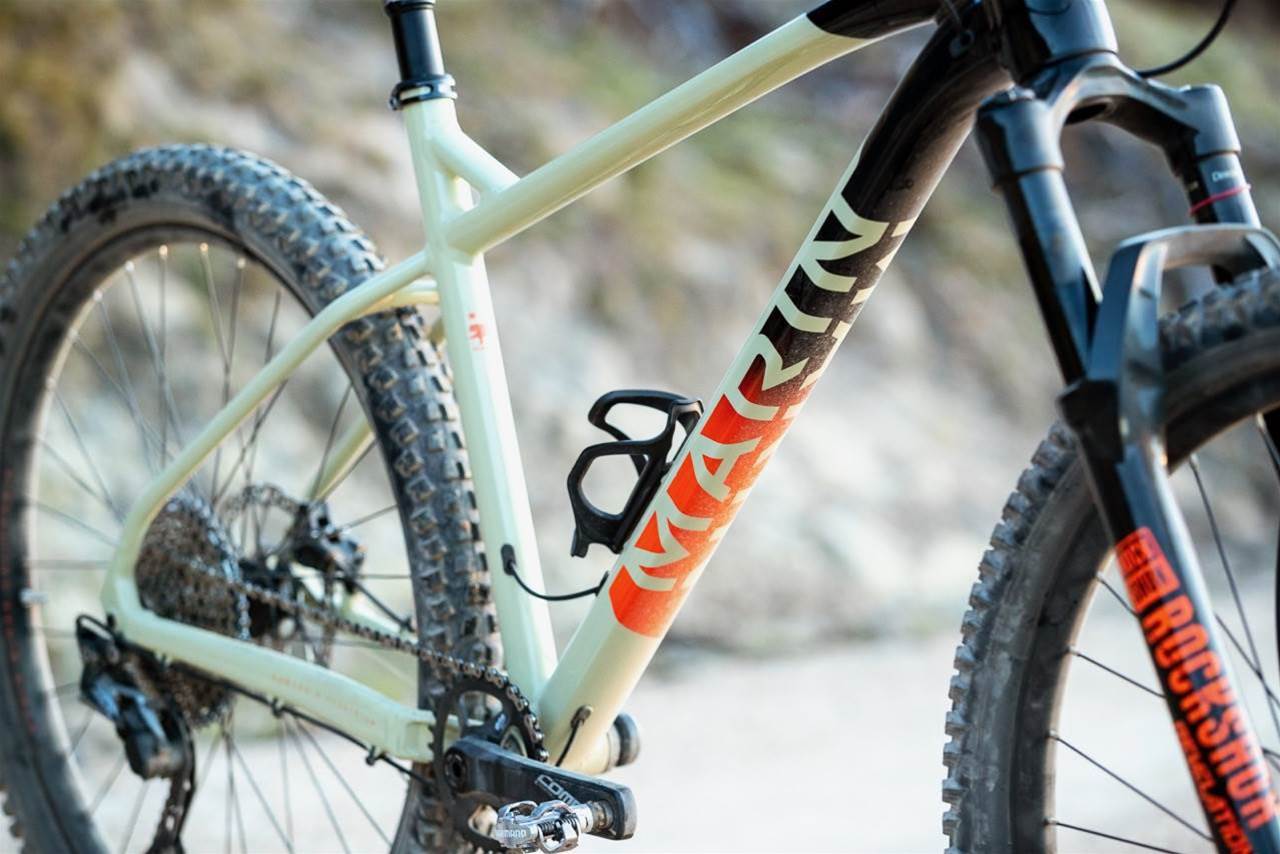 Prior to installing pedals and a bottle cage, we weighed the bike at a light 13.6kg. I decided against any further changes to lengthen the effective reach, pumped the tyres up to 30psi in the rear, and 26 in the front, and rode out the back door to Mount Stromlo’s trails.

San Quentin just wants to be pointed down. A shorter reach of 624mm did feel a little cramped on climbs, which could have been improved with a longer 50mm stem. Alternatively, I could have gone a size up to XL. Then I pointed it down. The shorter reach and short stem felt super snappy and playful through turns and jumps, making the bike super-easy to throw around. With a 65 degree head angle, the Marin San Quentin is on the money for super stable handling, and the short stem and not crazy reach means it still responds to rider input. The long wheelbase of 1193mm can also feel big, however when leaned into a corner or skating over rocks it’s planted to the ground like glue.

Chunky, soft-treaded tyres and tubed wheels feel a little sluggish on climbs too, however the high-ratio SunRace cassette helps get the bike up and over steep climbs with ease, and without a rear shock bouncing up and down, the San Quentin flies up climbs with relative ease. The 35mm length stem, combined with a 780mm wide handlebar and slack head angle have the San Quentin rocket up sharp hairpins, and change directions on descents effortlessly.  A soft compound in the 2.6” wide tyres easily grip to the loose, sand-like terrain at Stromlo, generally infamous for sending riders on regular dirt-naps. With hardtails being known for short chainstays, this one is of no exception, coming in at 425mm. You can definitely feel this in tight turns coming down the hill, as the bike snaps in and out of switchbacks without worry.

Stromlo Forest Park is well-known for a variety of trails, from the rough and natural to the flowing jumps. The San Quentin is a near-perfect bike for the mountain, with the slack angles loving airtime and short chainstays loving the corners, this party-spec hardtail started showing itself as a really fun bike, just as good as a luxurious duallie. I found the bike constantly teaching me a lesson on how to control a bike, and not have the bike control you. Taking the San Quentin off the flow trails and onto rocks, with the long wheelbase and slack head angle it floated like a spaceship, albeit a jittery one without a rear shock taking the hits. Picking smoother lines through rock gardens became a priority, and actually forced me to think about the best way to get from the top to the bottom. That being said, the bike isn’t the biggest fan of drops to flat and massive rocks. The Vee Tire Flow Snap tyres gripped to the loose gravel-like dirt very well, however I can see them posing problems following rainfalls, being skaty through slick patches of loam. Tyres are an effortless change though – if you aren’t a fan, a quick swap-out it easily done.

Freeride legend Matt Jones is seen absolutely shredding his Marin San Quentin 3 – sending it over dirt jumps and then straight down gnarly descents. Marin hit the nail on the head with this one, with the bike feeling both floaty and planted – everything you’d ever want in an enduro hardtail.
Like most bikes, hardtails are definitely susceptible to taking an absolute beating. Rims especially will come off worse for wear, but we found the Marin rims to be strong through turns and over rocks once tyre pressures are set up correctly. Running lower pressures in the rear is a risky game, as pinch flats happen all too easily, and flat spots on rims aren’t easy to bash out. The alloy verse steel debate when building a hardtail frame has been constant through the years – both as strong as one another, although steel is regarded as being more absorbent to large hits due to flexing under load (in a safe way – no snapping frames around here). Aluminium may be a lighter metal, but doesn’t flex under load, resulting in a harsher ride. Having ridden both metals, a steel-framed hardtail does take some of the hits off the body; however a hardtail is still going to ride like a hardtail.

We ordered the Marin San Quentin 3 from Australian online shop Bicycles Online as part of our direct-to-consumer review in this issue. It seemed crazy that the bike rocked up at my front door the next day, and I was super keen to get on the slack and long beast.

The San Quentin is made what it is by Matt Jones and I was impressed to find just how effortless the bike wanted to fly down a hill, pop through the air, and rail around the corners. The strong aluminium frame might not have the ride of a steel frame, but the build quality is there and it didn’t take long to have the brand new, out of box bike to be ridden.

As a hardtail with enduro-like angles, this is the toy every rider needs to be reminded of how easy it is to just have fun. However, if you’re a rider chasing PBs and KOMs, a slack and low hardtail might not be the way to go. You can’t go past the bang-for-buck that this bike is, with high-range gears, good suspension, and treaded tyres just begging to be pointed down a hill. At the time of review the San Quentin is selling for $2,199 and you get everything you’d need in your first mountain bike, or your second (or third) play toy.

I did personally find the tyres to be holding the bike back, and would opt for something more reliable and faster. The brakes were also a little underpowered for what felt like a heavier bike. You simply can’t go past the value of this bike though if you're in the market for a party hardtail.