The Canyon Spectral is Canyon's take on what a progressive trail bike should be.

Canyon has certainly gained attention in the last few years, with their direct to consumer model, distinctly German design, road handle bars that resemble a bi-plane and signing two of Australia’s young downhill talent. As Germans are quite literal and to the point, we will get straight into the good stuff.

The Spectral is Canyon’s take on what a trail bike should be, sitting under the Enduro race machine the Strive, the Spectral has 140mm of progressive travel on the rear balanced by a 150mm travel fork.

The German brand claims that the Spectral brings “the right mixture of traction, control, handling and playfulness into a robust trail-tamer” and has been dubbed MBR’s 27.5 Trail Bike of the year. The trail bike category is one of the most saturated and constantly evolving, Giant’s Trance, Specialized's latest Stumpjumper, Norco Sight, Merida One-Forty, the Santa Cruz 5010... the list goes on.

The new Spectral is built tough, it has been considerably beefed up compared to its predecessor that has the same travel both front and rear. There are visual cues from the Sender DH bike yet the Spectral retains a slender and whippy trail bike look. There are five carbon models, the top two being equipped with full carbon swing arms to match, three alloy models and what is impressive to see, three carbon and two alloy women’s models. 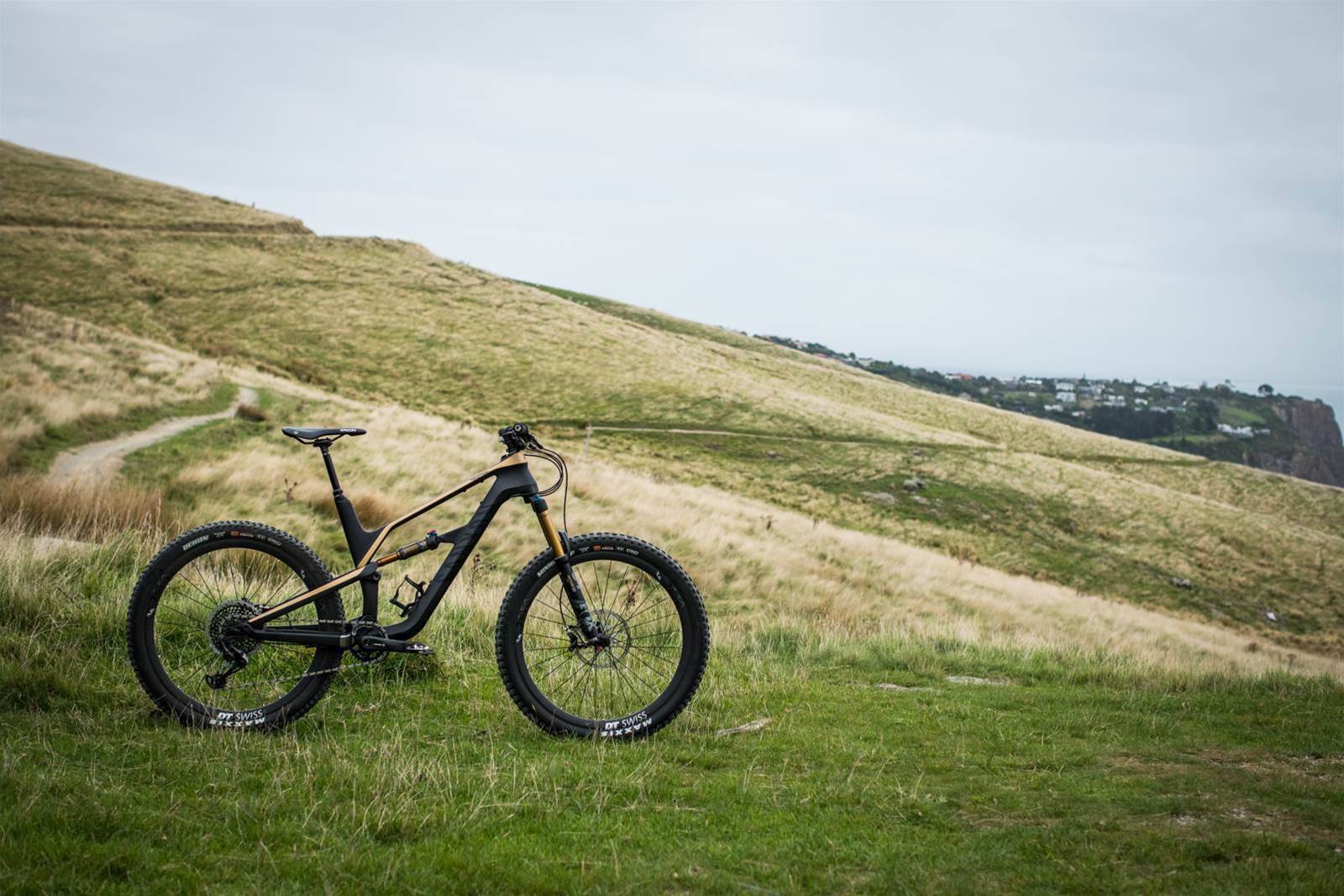 We had the Canyon Spectral CF 9.0 SL on test and it certainly turned heads everywhere we went. It has to be one of the neatest trail bikes on the market through very clever features and finishing touches that look so simple yet have been painstakingly conceived.

The list of these sleek features is huge so we are going to cut it to our favourites. The frame uses neither internal or external cable routing but a housing system bolted to and running the entire length of the downtube. Not only is it neat, it is easy to access for mechanics and when emergency field repairs are required but its also a downtube protector, absolute genius.

Canyon have built in a steering lock which protects the top tube from lever/shifter damage on smaller sizes when the bars spin all the way around, which can cause ride ending damage to hydraulic lines and frames. There are other brands like Trek doing this with Knock Block and its great to see this “Enduro” feature trickle own to the trail bike space. Even Canyon's Exceed hardtail has this feature. The Spectral has a weather proofed frame. The seat tube has a neat rubber cap sitting snuggly where the seat post inserts into the frame keeping water and mud from entering the frame. Main pivot bearings are completely covered with a weather proof cap, stopping mud and drivetrain slop from getting anywhere near the bearings. Team rider Joe Barns reportedly ran one side covered and one side uncovered (like a normal bike) for a few months riding on his home town sloppy trails in Scotland with the covered surviving and the uncovered being completely seized. Check out @Top_chief and the DuDes of Hazard for an idea on how brutal the test conditions were.

In the back, the rear through axle has a hidden quick release lever that stows away inside the axle like the 2001 RockShox Psylo’s Tullio axle, but much easier to use. There is pptional frame storage, the fits into the main triangle and a new water bottle storage concept using two 400ml bottles running in parallel, which works especially well for smaller frames. The RockShox 1 x Reverb lever fitted as standard which is a way better option for ergonomics. If you have a Reverb, this has to be an upgrade at your next service.

Canyon’s are assembled meticulously as they are being sent directly to the consumer rather than a skilled mechanic at your local bike shop. I first saw this phenomenon when Joe Barnes’ Strive was lost by an airline before Trans Provence and Canyon sent him another bike, we all thought it was his spare bike but in fact it was a brand new one from the factory. He assembled that Strive in camp before setting off for a 6 day enduro. He did it all so casually and being able to ride and race a bike right from the box is very impressive. Set up for us was as expected then, very simple stuff. We did install a Cushcore in the rear of our test bike, we spent some big days out in the raw mountains in New Zealand’ South Island. The confirmed weight was 12.6kgs plus 250g for the rear CushCore. We do have a few long term concerns that we will watch closely. How will the steering lock will last over time as the bars turn and the stop is contacted repeatedly? How will the seat post clamping mechanism and pivot bearings last in foul weather even with the additional seals?

The Canyon Spectral’s fit is right on the money by today's standard, with an increase in tope tube length, a short back end and lower stand over height. It is extremely playful while remaining stable at speed. We had a size large on test and at 178cm tall it felt spot on equipped with a Renthal Apex 35 stem and with a 633mm top tube. Being equipped with premium offerings from Renthal and Ergon all touch points felt very natural from the start. Canyon should be commended for choosing the best products on offer for their high end models, without in-house shortcuts anywhere. There's no part we'd be left wanting to upgrade. This trail-tamer comes into its own when let loose in the turns and there are many reason why. We put it through its paces on some seriously steep and root infested trails around Craigieburn on the South Island on New Zealand to see how it handled and we were impressed at how quickly it changes direction and responds to rider input all doing so without being twitchy or nervous on the challenging terrain. With a 66 degree head angle and 430mm chainstay length the Spectral loves to change direction fast! Canyon have paired this with a progressive rear linkage, so the bike accelerates out of turns in almost a spring like action. Set the corner up, push through the turn and sure enough as you near the end of the turn the bike picks up speed again, resisting that bogging down feeling that plagues many mid-long travel duallies. This was certainly helped by the 2.6” 3C compound Maxxis tyres and the ever popular DT Swiss XMC 1200 Carbon wheels with 30mm internal width - the bike has more grip than a goat on a scree slope.

We found the Spectral performed well in most terrain that we rode, especially the tight and technical singletrack it was ultimately designed for. It is also a competent climber with its steep seat tube angle, clever linkage and pivot placement and large tyre contact patches. It ticks all the boxes for a modern trail bike with a 27.5” wheel.

As beefed up as the Spectral is, and progressive and hard hitting as it feels there was no denying that hard all day bike park ridding was a stretch. The 150mm Fox 34 and the light and whippy rear of the bike felt like they were a little vague and indirect at times. It always felt well mannered and in control but just at the edge of comfort, which is completely acceptable for a bike that weighs only 12.6kgs.

Over our 10 days of ride tests, we were faced with some adverse conditions, dry and dusty, sharp rock, heavy rain and mud and even snow. The only issue that arose on the Spectral was a loose Jockey wheel, which is hardly worth the mention. Hassle free riding in all conditions. We did have to tighten the rear thru axle a couple of times over the first few days, maybe it was the freezing cold conditions and our numb fingers, as it didn’t happen again toward the end of the trip. Something to keen an eye on. Canyon stated they have built the ultimate trail-tamer and we tend to agree, you will be hard pressed to find another more capable and well rounded 140/150mm 27.5” trail bike. The Spectral is a highly competent all round trail bike that performs well on all types of terrain. For the confidence the Spectral inspired, it was a tad on the light side for bike park riding and heavy hitting riders – and that's where the Torque fits in the Canyon range.

We are confident that the extra weather proofing measure that Canyon have taken over its predecessor will result in trouble free riding for many seasons. The Canyon Spectral is the perfect bike for anyone wanting a do all trial bike, and while it's not cheap by any stretch of the imagination, the Spectral FC 9.0 SL is a lot of bike for $7199, and the Spectral is competitive at all price points.

Want more reviews? Subscribe to AMB and you save money and get the stories first!