The 2021 Merida Big.Trail range has the trail capability you want with a price tag to make you smile.

In August, Merida launched their updated Big.Trail range of hardtails. With new trial geometry based around a 29" wheel, Merida have married the geometry and features riders want from a trail bike, to a price point that will suit riders jumping into the sport or otherwise.

We took a closer look at the ramnge of four bikes, ranging from $1299 through to $2299 when they were released. And you can read all about them right here. With a Big.Trail 500 ($1849) sent out to review, we passed the medium bike to Anna Beck, to use and abuse on her local trails. On The Trail with the Merida Big.Trail 500

Modern trail geometry has evolved and progressed in increments year after year, meaning that a current model bike and one from 2011 will feel light years apart. Merida have really come to the party and changed the offering of entry level hardtails across the board. Merida has realised that a slacker head tube angle translates for better handling for most users, and those that are likely to benefit most from a stable, confidence inspiring rig are the newest riders to enter the sport. On paper, the Merida Big Trail is progressive in its geometry, allowing newer users the stability and handling of a 65.5 degree head tube angle without sacrificing climbing position and efficiency with a steeper 75.5 degree seat tube angle. This is actually slacker than the Merida OneTwenty 7000 trail bike being tested, and with a similar reach to the OneTwenty trail bike range. My medium tester has a 435mm reach.

We were keen to see how a tighter seat tube angle combined with the slacker front end would go in an entry level package, and swinging a leg over the bike it immediately felt comfortable. There is no need for shorter-legged riders to be concerned, with a 723mm standover height in our medium sized test bike, and I never felt concerned about a looming top tube or unplanned tank-slapper manoeuvre; another key consideration for the greener riders out there. The addition of the 35mm stem was a welcome surprise on this bike, adding some immediacy in handling that could be otherwise less direct considering the slack head tube angle. This combined with a 780mm bar with 20mm rise allowed that immediacy to be supported with great leverage and a comfortable descending stance; a great choice that suits a range of riders. A bigger bar-width is welcomed: you’re better off having too much of and working down to your preferred position than trying to make a narrow bar fit a rider that requires a wider bar. 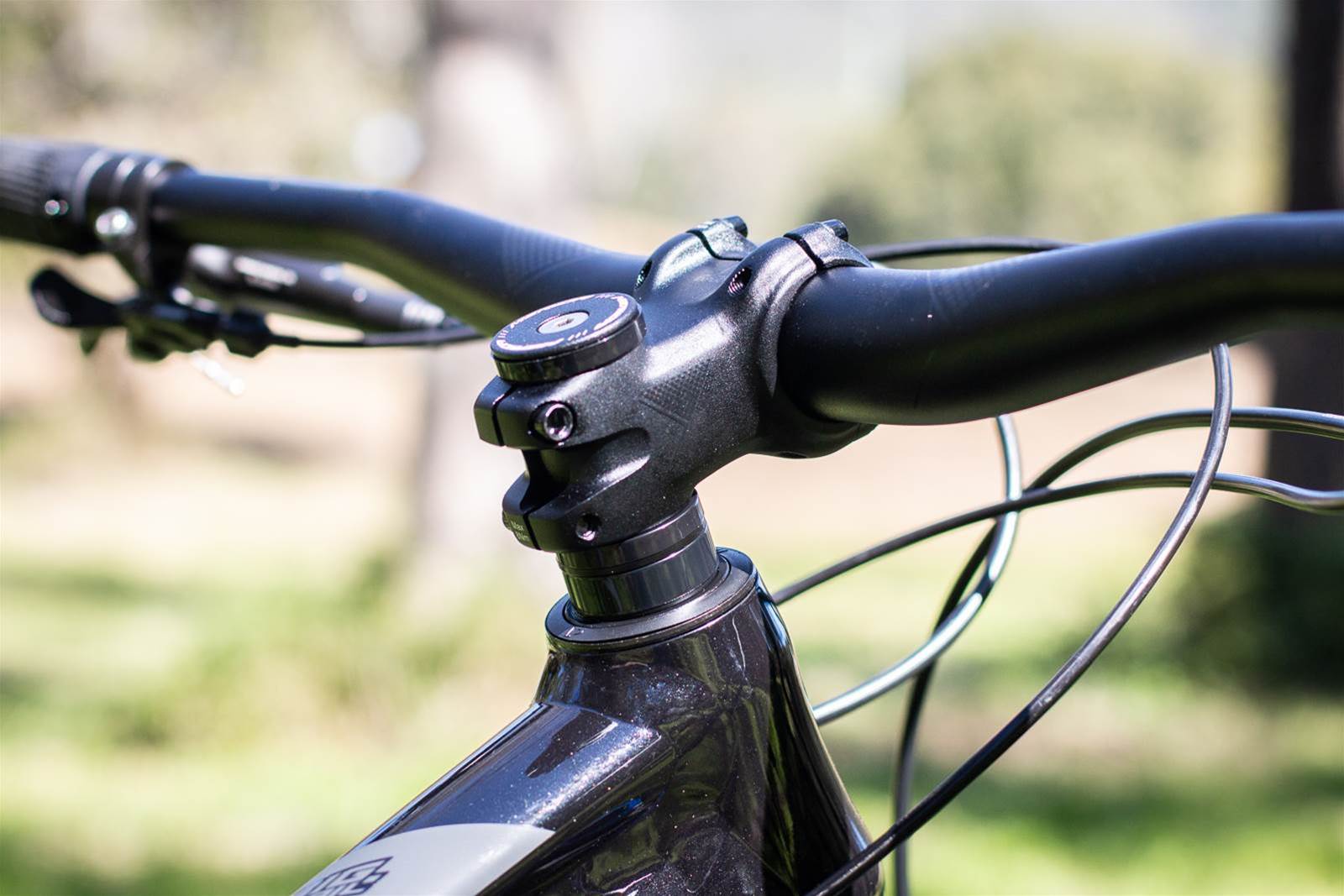 The maiden voyage on the Big Trail took me to Ironbark on Brisbane’s northside, where we sampled some of the blue and black descending trails and a few singletrack climbs to link them up. Climbing to the first descent, I was immediately struck with the immediacy of power transfer to the trail. Sure, the bike is no featherweight and it’s not going to take it to a cross-country bike to the wire when raced uphill, but the seat tube angle combined with a reasonably short 435mm reach, allowed a forward enough position that climbing felt spritely enough, especially for a 140mm bike tipping in at ~14kg (13.6kg without pedals). The Deore 11-spd 11-51T cassette combined wth the 32T chainring more than compensated for the heft, allowing to spin to win up even the steepest of climbs. In terms of tight switchback and technical climbs, we had some initial issues with wrangling the front end around some tight climbing switchbacks, due to the raked out 65.5 degree head tube angle. By the end of the ride we had won the fight by adjusting our approach for the geometry and wheel size combination, but it certainly illustrated that tighter climbs on the Big Trail required a lot more rider input than many trail bikes we have ridden. This is pretty common on any bike that gets more travel in the front and a slacker head angle.

The same limitations weren’t felt, however, when the gradient pointed downwards. The bike was an eager descender: the Big Trail felt like it came from a pedigree of half oversized dirt jump and half gravity bike, and this is where the geometry really shone in creating stability and confidence. The Big Trail is an eager descender, the proprietary Merida dropper post in 150mm (all sizes except small who have 125mm) certainly added to the confidence on the descent, and on trails that feature jump lines it’s responsiveness and position urges you to boost things you probably wouldn’t consider on a hardtail with ‘old school’ geometry. This led to some wild moments, where I was rudely shocked that I was riding a hardtail and only just made it out with my ankles still attached; but the only reason I got to that point is because the Big Trail gives you the confidence and pushes you to take the same lines you would on a dedicated enduro or trail bike.

The RockShox Recon Silver RL tried to keep up, and considering the price point it did remarkably well, but would be my first port of call for upgrades on the Big Trail 500. Despite the Recon featuring low speed compression and rebound adjustability (great for the price point!) it would likely be the most limiting factor for performance as the Big Trail owner progressed their skills, as well as adding to the overall weight of the bike. The Maxxis Dissector tyres are solid pick for all-round robustness, for general trail riding you could easily shave some 500g off total weight with some Maxxis Rekons, but the beauty of the Dissector is that it allows you the freedom to make some dubious last minute decisions and get away with things that you probably shouldn’t. In our dry, pebbly and dusty South East Queensland trails, they allow an extra layer of confidence on the Big Trail. I also completed a four-hour endurance cross-country ride on the Big Trail, and while it performed valiantly and shredded in the singletrack, it’s heft and reluctant uphill cornering meant that it took endless energy to mix it up with the big-wigs on the climbs. A newer rider getting into the sport looking for something to do some cross-country, marathon or stage race may better be served by Merida’s range of Big Sevens and Big Nines that feature slightly more aggressive geometry, and faster rolling tyres with less overall weight. But if you're about trails and fun - the Big Trail is what you should be looking at.

To be honest I probably went into testing the Big Trail with some preconceived ideas about a bike that costs $1849. Coming from riding more high-end trail bikes I certainly didn’t foresee myself having quite as much fun on the Big Trail as I did. The geometry meant that the Big Trail tread the perfect line between planted and poppy; it’s an oversized dirt jumper when it comes to sending it (watch the ankles) yet is stable and planted enough to get through rougher and more technical chutes are rock gardens without feeling the need to reassess your Will and divide up the estate.

I can think of better hardtail options that require far less input in technical climbing than the Big Trail, but what it lacks in tight, technical climbing nous it makes up for in general fun times and descending capability, key elements to finding fun and flow for the newer rider and ensuring first experiences of mountain biking are fun, rather than terrifying. For general trail riding and a mixture of fast and open trails and switchbacks, I had no more issue than any other 140mm, 29” bike would, and the geometry and well-heeled Maxxis tyres meant that at speed the bike handed the input remarkably well.

There were no real issues with the bike while testing; the drivetrain was solid and while the Rockshox Recon was basic and at time overwhelmed, it is specced well enough for a bike at this price point and is a good entry point for a bike that retails at $1899. If you're after more fork from the get go, popping an extra few hundred for the Big Trail 600 ($2299) with a Marzocchi Bomber Z2 and Shimano Deore 12-speed would make sense. That's an extra $450 though, and about 25% of the cost of the Big Trail 500! Considering this, it’s a great package deal for an entry point into the sport without breaking the bank, and the frame and geometry is such that if you upgraded to a mid-level bike after a couple of years riding, the Big Trail could still serve a great purpose in the fleet: you could single speed it, whack an extra bottle cage on and lighten it up as an XC rig, upgrade the suspension and some even more gravity tyres on it and run as a DH hardtail, fit some frame bags and set it up as a bikepacking rig…the opportunities are endless. The beauty is in its flexibility and adaptability.

The humble hardtail has evolved: and we’re not sad about it. The Merida Big Trail 500 allows an entry point into the sport without sacrificing fun or confidence as previous hardtails at this price point may have.

- Aluminium frame with trail geometry and lots of standover clearance

- Boost spacing for fork and wheels

- Lots of stand over

- Hidden mounts for racks, fenders and a bike stand!

For further details, head to the Merida Australia website, or check back to the first look at the whole Big Trail range.