Mark Mackay is the winner of AMB's 2021 Photo Awards presented by Shimano, the second time he's taken the top gong!

If the name Mark Mackay rings a bell when it comes to the AMB Photo Awards presented by Shimano, it’s because he’s already won the competition once back in 2019. We have seen Mark's photography on our pages a number of times via submissions and within some riding trips to cool destinations around Canada. His photos really immerse you in the natural environment, with a careful eye for composition and a talent for getting the timing just right. Mark's entry for 2021 left our three judges in no doubt that he deserved to win a second time – the first time that has happened in the AMB Photography Awards. His four photos captured each category perfectly, and his technical precision with the photography was second to none. 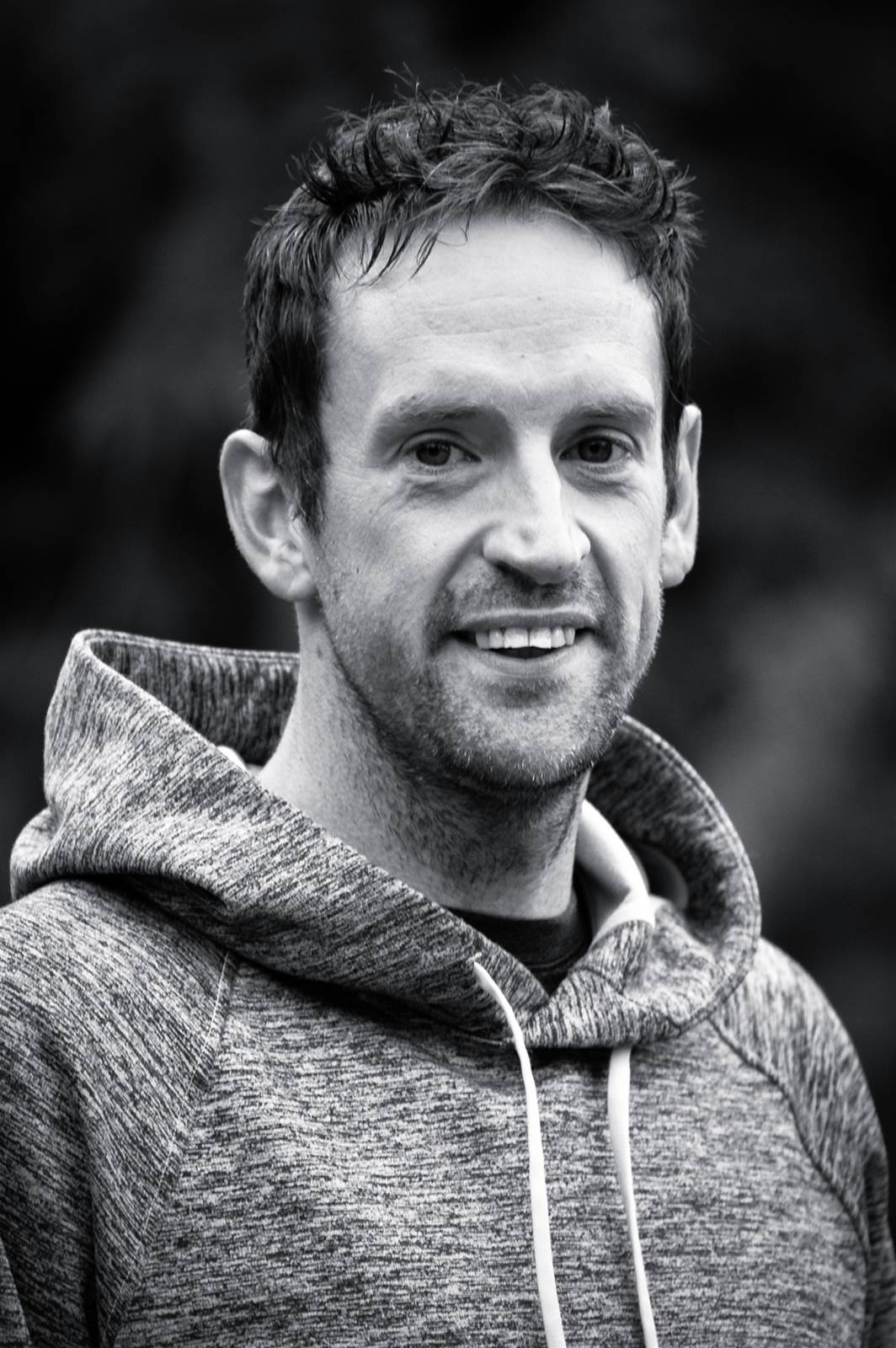 Mark Mackay is AMB's 2021 Photographer of the Year.

Speaking about how this victory compares to his first, Mark said that winning in 2019 gave him a sense of justification for the years of hard work he’d put into his craft, but over the last couple of years he’s simply tried to have fun with his mountain bike photography.

Mark is originally from Scotland but has called Whistler home for 11 years. He says the incredible landscapes of British Columbia (BC) inspire him to keep progressing his skills as a photographer.

‘I moved to Whistler from Scotland 11 years ago, and nature is the biggest inspiration for my photography. It’s never ending here in terms of landscapes, and the inspiration from nature is endless. Location in my photography is something I focus on, often my subject is small while the landscape is large, and I’m aiming to convey what it’s like to be moving through the landscape at that time, be that by mountain biking, trail running, or hiking.’

Whilst he’s featured in plenty of mountain bike titles across the world, these days most of Mark’s photography work is shooting for commercial clients.

‘To be honest with you, I don’t pick up a huge amount of paid mountain bike photography these days. During the shutdowns of the pandemic, I wasn’t shooting for work much at all. It did give me time to shoot my own personal interests like mountain biking, because it’s what I enjoy the most. Only one of my four shots are from a commissioned shoot, the others were all taken from a passion perspective.’

Mark says that in the early days of trying to turn photography into a full-time job he put plenty of pressure on himself to pick up paid shoots, but these days he specifically focuses on having fun, having the right people around him, and not focusing on money or picking up work.

‘I think when it comes to photography, just go out and enjoy it. One of the best tips I was ever told was don’t do it for money or because you want to get jobs, just do it because you love it. Personally, I put too much emphasis on getting jobs early on, and it’s been much better to stop thinking about that and focus on having fun.’

When it comes to the photography itself, Mark says focusing on the basics and staying true to his passions have helped him progress his skills.

‘In terms of actual photography tips, getting the basics right will go a long way. I’m not a technical photographer who uses flashes or takes a lot of equipment on shoots. It’s things like composition and light that I focus on getting right. Knowing the riders also makes the whole experience more fun, that’s why most of my shots are with riders I’m friends with and know well, as it means they can relax and ride comfortably, which always makes for the best shots.’

As this is Mark’s second AMB Photographer of the Year victory, it’s the second XTR group set he’s won. He used the last group set to build up a long travel weapon to take on Whistler’s steep and deep offerings, but this time around he thinks a short travel play bike might be the way to go.

‘Last time I built up a Specialized Enduro with the group set, which is a great bike for the trails I like to ride around here, but a short travel bike would be nice for some of the flowier trails, so maybe I’ll build one of them up this time!’

At the end of the interview, Mark had some great advice not just about photography, but life in general.

‘I guess with photography I love combining it with nature and having fun with friends. That’s why you pursue whatever it is you’re passionate about - because you want to have fun!’ ‘That’s my best friend Ollie Jones in this one, he’s an amazing rider and professional videographer so he’s got a good understanding of what will work and what won’t. We’d just finished up a video shoot for Schwalbe in Kamloops and we found an old jump that needed a bit of work to get it running again. We knew the sun was going to be setting soon and it could make for a good shot, so we decided to have a little session. We put two hours of work in, and then as the sun was setting, we got the shot. He’d forgotten his riding shoes as he wasn’t expecting to be riding, so he sent it in his Blundstones!’ 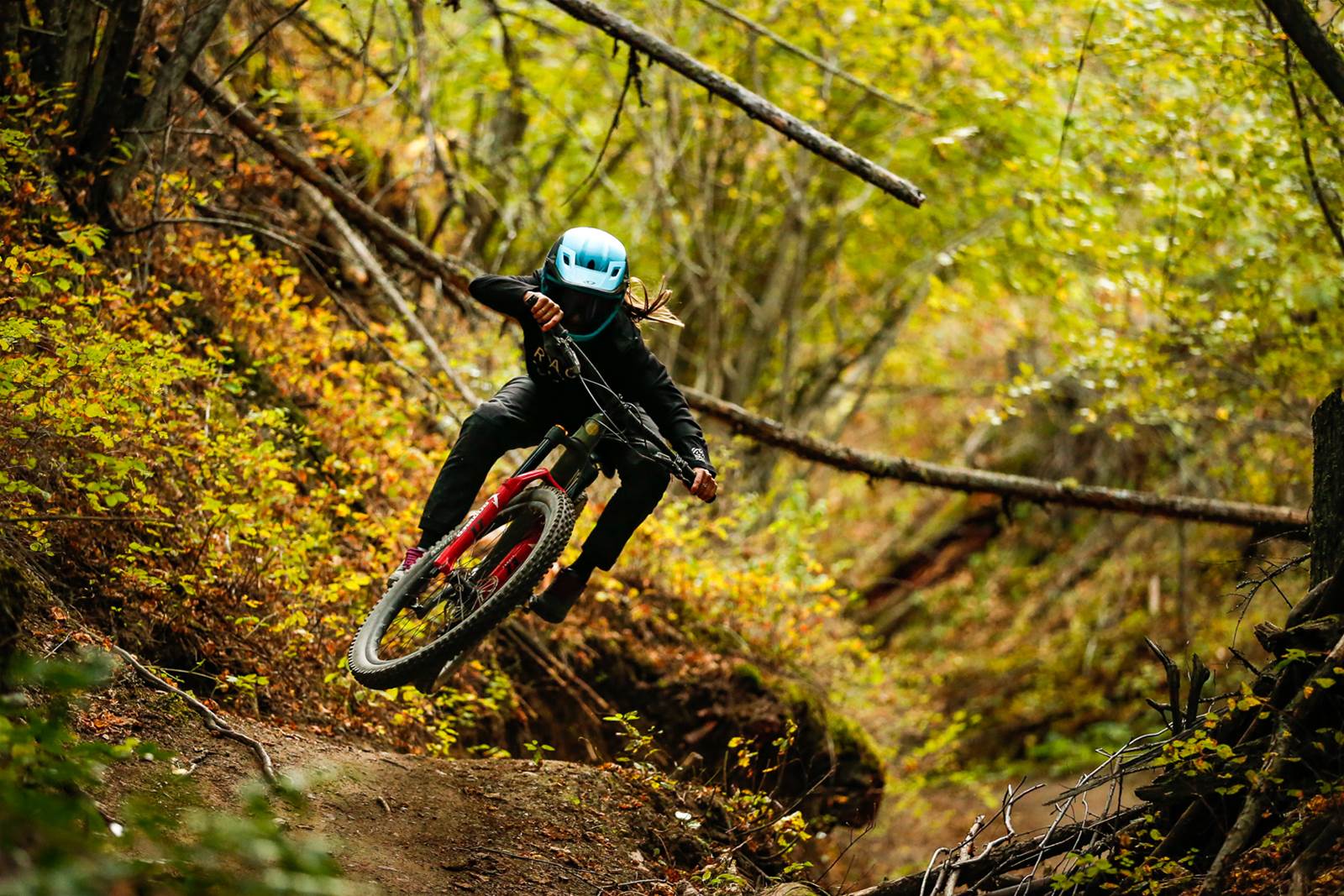 Hailey Elise keeps it low in the Kamloops fall.

‘I was in Kamloops again for this one, although this trip was a fun trip we’d gone on in the early fall. Hailey is an amazing rider and a photographer herself. She’s been working on her body position and style on the bike in the last couple of years, and it really shows in her shots, which is why I picked this shot for the competition.'

'What I wanted to portray for the Women in AMB submission was women getting rad and having just as much style as the men. In terms of the fall colours in the photo, it was more of a right place right time situation than any forward planning from me.'

'When you go out and shoot with any rider it’s about playing to their strengths. There’s no use going out with a rider on a massive jump line if they’re not comfortable in that type of terrain, as they’re not going to be able to express themselves through their riding. I like that in this shot you can see Hailey’s confidence as she attacks the trail.’ Mark's travel photo was taken on the way down from a Mount Sproatt bikepacking trip.

‘For the Travel photo I wanted to show bikepackers travelling through the stunning sunrise environment. I wanted to convey the feeling they were experiencing of riding through this environment in this moment in time, and I want people to see what a great time they’re having.'

'This was one of the last photos I took before the competition closed, only a couple of days before in fact. One of my friends was going up Mt Sproatt in Whistler, riding up in the evening and then back down in the morning, and I said I’d come along because I knew it would be a great shot for this competition. So, this shot was one where I specifically had the competition in mind.'

'Sometimes you’ve got the time to figure out the sun and the light and plan it, and sometimes you don’t, but for this shot I knew it was going to be good.’ ‘I’ve been shooting with Jackson Goldstone for a number of years. It’s crazy to look back to photos I have of him five years ago, where he looks tiny compared to now. Nowadays he’s racing Junior World Cups, and he’s winning Junior World Champs!

'This shot was taken down in Squamish, about 40 minutes away from Whistler. For the whole winter Squamish didn’t get snow and we were able to ride, and the environment was some of the lushest green textures that I’ve seen.'

'A shoot for a mountain bike title came up and this was one of the shots from that shoot. I chose the portrait orientation to show off the lush landscape, the height of the trees, and give a sense of how big Jackson was going.'

'When the AMB Photo Awards came up I thought this was the ideal photo as he’s a next generation talent killing it now on the world stage, and this is a shot from his hometown where he’s honed his craft.’