Have you ever ridden a trail that has a legacy that is passed on by whispers? That is so secret only a handful of people have ridden there? That was created as a personal mountain bike playground for a reclusive billionaire?

Welcome to Wairoa Gorge, a stunning hour’s drive from sunny Nelson on New Zealand’s South Island. As a writer/rider type, I was given the privilege of a ride at the Gorge to experience all this mountain bike wonderland had to offer.

Trundling my brand new test bike out in the darkness of Nelson’s early morning, after two hours sleep due to a missed flight and subsequent midnight arrival, bike build and watching too much Seinfeld, there was still—despite the fatigue—a tingling of excitement. I met our hosts from Nelson cycling adventure company, Trail Journeys, outside the hotel and as a hint of the sun poked through the crisp darkness, boarded the bus to our mountain bike adventure park.

“It’s a very special place,” one friend told me. Another said: “Better get some more safety gear.” And a third added: “I hear it’s the Willy Wonka chocolate factory for mountain bikers!”

What exactly was I in for? The crew was fierce. We had the Aussie ex-pats, good friends and former World Cup cross-country riders turned gravity diehards Waz and Zoe, Shane from Trail Journeys, George our photographer, and Rachel, fellow bike media and seasoned Enduro shredder and British national who has made Nelson her home.

The sun continued to rise and illuminate our surroundings as we headed out of Nelson, opening up the mountainous hillside and lush, green scenery we can only dream about in most parts of Australia. Winding up a dirt road towards our destination, the terrain became steeper and more wild. I joked to Zoe wondering if the sheep get sore hooves from standing lopsided on the steep mountainsides.

Turning into the Wairoa Gorge park, through the heavy gate which remains locked for all but a select few who have access to the trails, we parked the bus at the base where “Robbie’s Hut” is located and where we get a safety briefing and talk through the procedure for the day. When we are in the park it’s in lockdown. It’s all very serious for a while. The looming mountains surrounding us hold promise and mystery, and I wasn’t quite sure what was in store for us.

“Robbie’s Hut” is where groups get dressed in their compulsory gear (helmet, knee pads and gloves), given the safety talk, and kitted out with radios. From here we embark in a dual-cab ute, featuring wooden seats and seat belts on the tray, and with a bike trailer attached, ready to climb to the 1200m peak.

As child of the mid-1980s with a strong love of dinosaurs, all I could think of while winding our way up the mountain was: ‘This is just like Jurassic Park’. After all, the park was built by a wealthy investor, who hired world-class trail builders to craft a trail network unlike any other in his own backyard. The foliage is otherworldly, it’s hard to imagine finding larger ferns, more dense brush, wilder roots; and this is before we even dropped in. 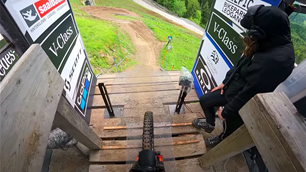