Derby has become global example of a resources town now investing in tourism. So what's happening in the forests?

You have either been mountain biking in Blue Derby, Tasmania, or you want to go. The mountain bike trails that have been open since early 2015 have really put the north east of Tasmania on the map. What started as an impressive investment to make mountain biking breathe life back into a town ended up snowballing. The trails have spread to the coast at St Helens, and back inland towards Branxholm as well. And that says nothing of the further developments around Tasmania.

The town of Derby has hosted two Enduro World Series races, national Enduro events, the 2015 and 2016 Cross-Country Marathon (XCM) National Championships, and more mate's riding trips than could be calculated! While in 2015 there were only a couple of options for places to stay, these days there are options galore. From bunk houses to high end lodgings and everything in-between, the private investment in Derby has shown that the government's investment in the trails paid off. Businesses have developed, and people visit for multi-night stays, and they come more than once. For anyone looking at measuring success, the boxes are ticked. One of the big drawcards in visiting Derby is how quickly you get immersed in the natural environment. Whether you're riding amongst huge tree ferns, beech forest or on a sub-alpine plateau on the Blue Tier, the environment and connection with nature is such a big appeal of visiting there.

Take a look at a map and you'll see that nearly half of Tasmania looks to be National Park of some kind - there have been notable battles to make it that way over the past decades. Resources still play a big role in Tasmania, and forestry work remains. We all need wood and paper products, but many would expect that these now coming from plantation forests. The trails at Derby are built in forestry land, much of which are regrowth after some selective logging or mining over the past 150 years. But now, it appears some logging coupes right alongside popular trails are being clear-felled and burnt, and replanted with species to create a potential monoculture. There's a lot more to read on this at The Examiner.

We became aware of new information surrounding logging in the Derby area in March and April - and logging has begun. The trucks start rumbling well before dawn, and leave down main street laden with huge loads. As you can imagine, the issue is complex and involves advocacy groups, state and local government, and private businesses all of whom have a stake in managing the Derby area and its natural resources.

In short though, the area where many popular trails are is largely earmarked for logging at some time, and while the trails themselves are probably safe, the landscape that surrounds them, and the forest that riders have come to appreciate when they visit the area, are most definitely not. Logging will likely take place to include a buffer of potentially upto 20m between clear fell and the trail. Maybe enough to not be noticed when you're focused on your line - but it's unlikely to have the same success rate for the forest's ecosystem.

When we mentioned the logging on our Instagram account in March, the response was pretty strong. Most readers interacting with the post did not support the logging, but questions came up. Are the forests being logged plantation? Is it selective logging? 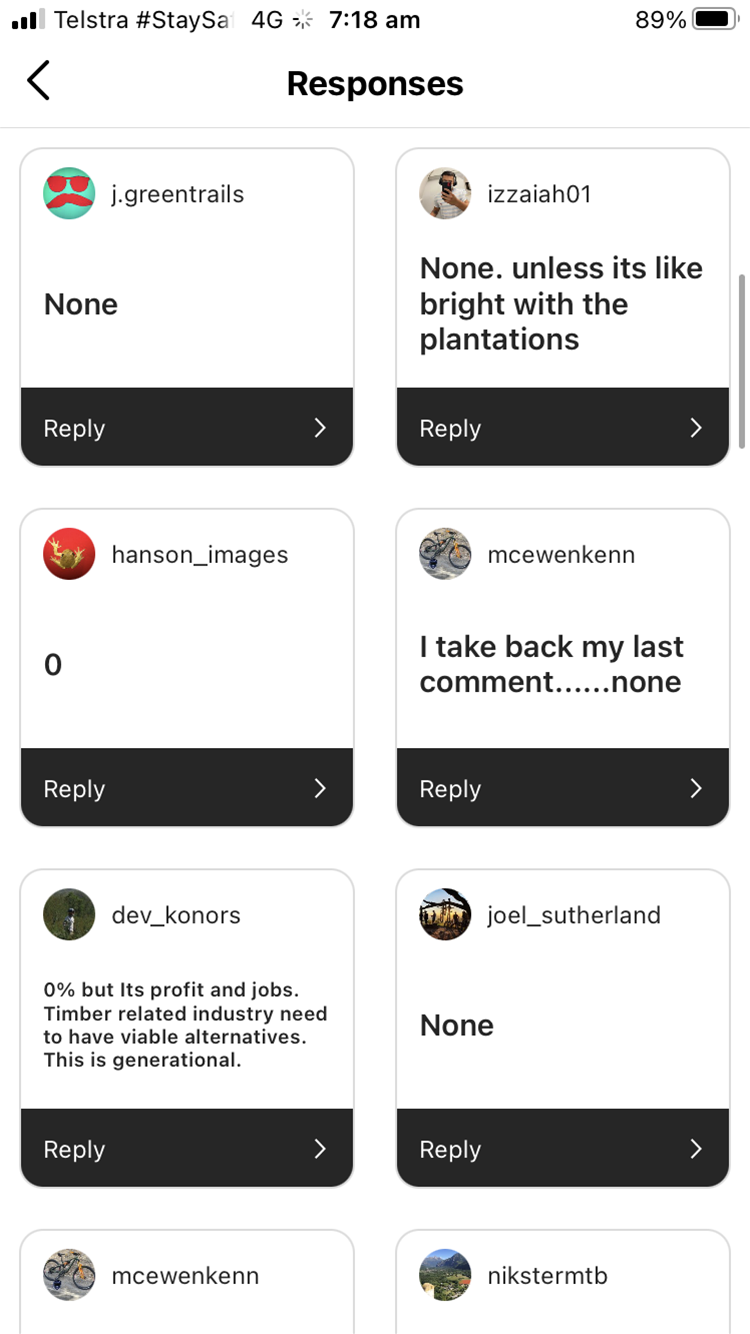 This is just a sample of some responses.

We're deep into the research, but getting to the bottom of these issues and giving all stakeholders a fair chance to respond takes time. We'll let you know on social media when we publish our in-depth analysis of what's going on. In the meantime, if you have any comments or information, email us at amb@nextmedia.com.au.