We aim here to cut through the fog when it comes to recovery and found out what really works!

Performing your best requires a boatload of work on and off the bike. We spend hours climbing hills, riding high-intensity intervals, and circling back to re-ride techy featuresto build the skills to roll them clean. Nearly as much time is spent off the bike, in the garage, cleaning, lubing, polishing and tinkering with our bikes to keep things running smooth and fast.

Recovery is an equally essential aspect of riding that some would have you believe takes as much effort as riding itself. With the advent of social media, some pro riders have lifted the veil on their elaborate recovery and self-care practices spanning from shakes, massage and meditation, to cupping, electrical muscle stimulation, inflatable moon boots and more. Worse, there's miles of misinformation on the best practices for refuelling and rejuvenating your muscles; should you be consuming a 4:1 carb to protein ratio or is 2:1 ok? Is a car buffer safe to use to massage tired legs if you can’t afford a Theragun? What about the ‘vinotherapy’ red wine baths six-time NBA All Star Amar’e Stoudemire made famous? The internet will tell you all of these are best practice. There is a burgeoning global wellness and self-care industry that is now worth about $30-billion according to the International Health, Racket and Sportsclub Association, and brands are trying to sell you everything from vibrating balls that look like sea urchins to refrigerated compression boots, and chalky drink powders in flavour combinations you normally wouldn't eat.

When it comes to proper recovery, keeping yourself in fighting shape isn’t as difficult is you may have been led to believe; and as AMB nutrition columnist Zoe Wilson points out the correct carb to protein ratio is in fact 3:1 or 4:1.

“The reason this (ratio) is rough is that carbohydrate should be ingested based on weight (~1g/kg immediately after exercise and then again an hour later contributing to an intake of 7-12g/kg for the whole day) by protein research is based on a single 10-25g dose,” Wilson says.

“When we are talking about (drinks for use) during exercise the ratio of glucose to fructose is 2:1 which is where I think people get confused on some of those drinks; whether or not it's a recovery specific drink or energy drink for during because some of those have protein too,” she says. “I think it's totally confusing and every company is trying to find some little point of difference, or way to talk about it to make it (their product) seem like the best option. But, most of the time for the everyday athlete they are essentially going to give you the same thing, and it won't make too much difference.” What does your recovery nutrition look like? Photo: Mike Blewitt

When it comes to the physiological side of recovery, one thing reigns king over all else. “Sleep is what we flag as the number one recovery strategy for our athletes,” says Stephanie Shell, a Physiologist specialising in Recovery at the Australian Institute of Sport. “Most people need at least 8-hours per night, sometimes athletes and young people need more, but if you’re not getting a good night sleep, it doesn’t matter how much time you spend in an ice bath or foam rolling, you’re not going to recover as well.”

When you’re talking about recovery nutrition, there are thousands of products out there; powders, bars and whatever else that are all vying for a spot in your pantry. For the vast majority of riders they are an unneeded expenditure.

“I think for most of us if you're not backing up within 12 hours for another mission, you can use food,” Wilson says. “You can get sufficient carbohydrates and the protein just in breakfast, if you’re organised enough; if you're on the trainer and then have a shower and then sit down and have breakfast before work, you can have a meal and get just as much as what one of those recovery shakes would give you.”

While Wilson says, the majority of riders don’t need recovery drinks, she does concede not everybody has time for a meal after a workout and this is where a recovery drink might be useful. However, she cautions about doubling up as that’s likely taking on too many calories. Another recovery buzzword is the glycogen window or the 30-minutes after a workout where your body is craving nutrients and needs to be refuelled quickly for optimal performance for your next ride.“Again it comes down to the timing and the goal of your session, so the window is particularly important if you have less than eight hours before your next session or if you're doing a high training load,” Wilson says. “The recommendation still says one-gram-per-kilo of carbs per hour for the first four hours and then just back to your normal eating. But what we are trying to get people to focus on is just making sure they have the balance with some carbohydrate and some protein in that initial meal or snack whichever way you’re going within about 30 minutes after your session.”

But it’s not just about calories, carbs and protein, you’re losing a lot of fluids out on a ride. On the bike staying hydrated is an ever-present worry; however replenishing fluids often takes a back seat to carbs and protein. “Hydration is extremely important in recovery because we know that the hydration can affect things like reaction time, fatigue, headache, your ability to manage temperature—so especially during summer when you are more likely to overheat. It can lead to things like cramps, twitchy, muscles, and poor concentration and decreased skill performance.”
As an exercise, Wilson recommends weighing yourself before and after a ride, and whatever you’ve lost you’ll need to drink 1.5l per kilo to properly rehydrate. 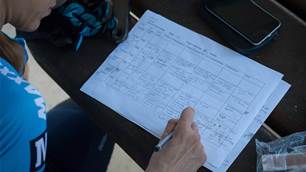