For 2022 the new Trek Top Fuel takes its feet out of the cross country camp and firmly plants them in the trail bike camp! In 2004 the Top Fuel was a pure and dedicated cross-country race bike being piloted in Australia by the likes of Justin Case and Imogen Smith. Updates saw it lead the charge for cross-country, notably being piloted by riders like Dan McConnell, Brendan Johnston and Zoe Cuthbert. In 2019 it developed into a more capable bike with light trail applications, bumping up from a 100mm platform to 115mm with a 120mm fork. Now with 2022 around the corner we see the Top Fuel move over into the ever popular and growing short travel trail bike market. 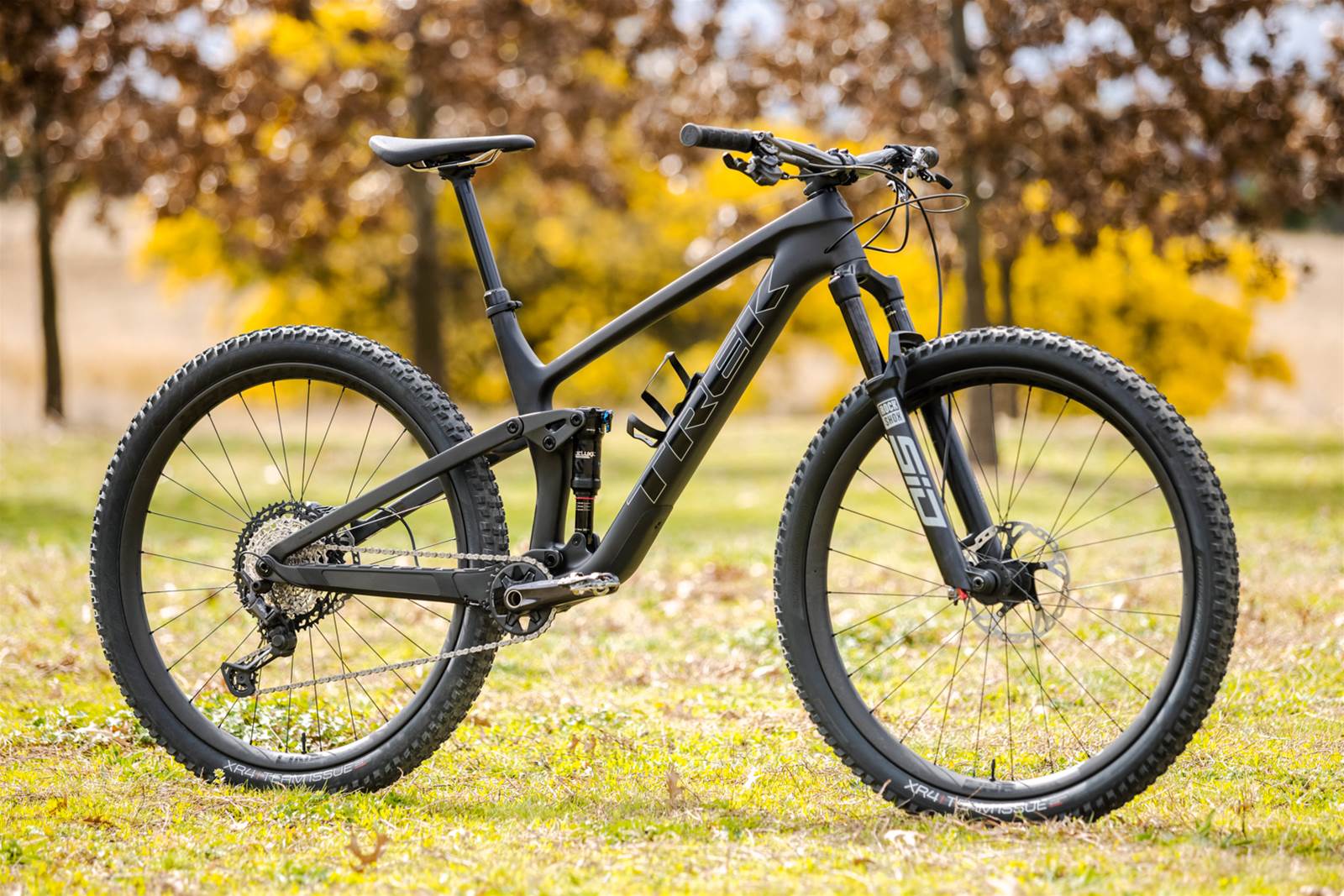 Along the way, there have been several geometry changes to the Top Fuel. In the past these have included the standard head angle, seat tube and bottom bracket changes while also getting progressively more reach in the top tube. So, it comes as no surprise that Trek have applied the longer, lower slacker term, while developing the new top fuel.

Some of the 2022 highlights include an increase in rear travel to 120mm from 115mm and the compatibility of a 130mm travel fork, although 120mm is stock. We also see the modernisation of shock mounting going to a trunnion mounted shock. Our test bike had a RockShox Deluxe Ultimate shock while there are other models in the range that come with Fox DPS shocks. Trek also approves some models of rear shock that feature a piggyback from top brands like RockShox and Fox.

On average there is a 10mm increase in reach across the range, for example in 2021 a large Top Fuel had a 470mm reach but now has a 480mm reach. Something to note is the old Top Fuel often shipped with around an 80mm stem and the new one that we tested came with a 45mm stem on a size large bike.

A standard feature we are starting to see on bikes these days is integrated frame storage of some kind. Trek use this on their road and gravel bikes not just exclusively on their mountain bikes so, it comes as no surprise to see any new model of bike Trek are releasing such as the Top Fuel, come with frame storage hidden underneath the bottle cage. As a small segue from frame storage, Trek are now using a full tube in tube system for internal cable routing, this is great, in fact it's refreshing to know that you can replace the cable on a dropper post and it's just going to come out the other end and without having to get some sort of magnet system to make sure the cable comes out first time. The only place that you'll notice this is when you poke your head inside frame storage (head will not fit in frame storage) you can see some little tubes running along the inside of the frame.

Another update is in frame protection, with the odler Knock Block giving you 58 degrees of turning while Knock Block 2.0, just like that featured on the Slash, provides 72 degrees of turning making it a much more shuttle friendly bike when throwing it over a tailgate. This really does show that this bike is meant for much more than climbing up hills all day.

A common Sight on all Trek full suspension mountain bikes is the MinoLink. Traditionally you see them featured on the top of the seat stays and for 2022 we see it move to the lower shock mount, still offering an adjustment in bottom bracket height and head angle, just in a new easier to use place. The new MinoLink offers about 5mm of change to the bottom bracket height, 0.4 degrees for the head and seat tube angle and a tiny 1.1mm change in the chain stay length.

When I first received our Top Fuel, we had no information regarding its changes other than what we could see when comparing it to the current model that was on hand. Visually they are extremely different with a much more aggressive stance than the previous Top Fuel. This stance was almost a bit of a dead giveaway with the intention that Trek had been developing the new bike for 2022. In fact, it makes the old bike look quite slim and very cross country in oriented with the new bike looking strong, aggressive and the potential for lots of fun!

Even with a 120mm travel SID fork attached the new Top Fuel doesn't look like it's set for just light use. The 35mm legged XC fork is hung on a burly looking frame with an aggressive stance, wide carbon wheels with an oversize cockpit and big brakes. It's not an XC bike or an Enduro build – but instead some sort of light, fast and capable trail bike dream build. At 12.9kg for my test bike it isn't setting any records, but riding it would prove whether this build was a dream or nightmare.

Brilliant climbing aside, as soon as you throw a leg over the Top Fuel everything about it just screams fun, from the 435mm chain stays, short stem and slacker head angle and even just how big the tubes are when you look down on them – it all adds up to more confidence when pushing hard on rougher trails. It's hard to believe the previous iteration of this bike was a cross-country marathon bike chosen by Trek-Pirelli riders for some World Cups and races like the Cape Epic. Some of the progressive changes made to the Top Fuel have certainly added to this bigger, musclier look. I could have been riding this bike out in the open for months without anybody noticing that it was something new because it shares so much in the looks department with bikes like the Slash. This is by no means a terrible thing when it comes to aggressive trail riding. The extra beef on the frame and build gives you the confidence to push hard knowing your bike is up for the challenge, and the Top Fuel is certainly up for a challenge. I'm lucky enough to have had the opportunity to ride lots of short, mid and long travel bikes. I'll often ride a bike that says it's one thing and it's really another and the Top Fuel in the past said it was a marathon or cross country bike. The Top Fuel of the future says it's a trail bike with trail bike intentions right down to is parts spec – and it's true. The fact that you can pair a 130mm travel fork on this bike really does open up the type of rider that will feel at home on it. Even at 120mm of travel on the front the Top Fuel is an incredibly capable bike and matched with strong Bontrager Line Elite 30 wheels you feel very assured heading down some rougher technical trails that some 120mm bikes shouldn't be riding.

Herein lies the fun and the beauty of the Top Fuel, it wants you to go down that trail and it wants you to try and push your limits and it's not going to say sorry for making you do that kind of riding. Think of the Top Fuel as that friend who's just that little bit better than you and is always pushing you to do a little bit more because they know that you're up to the task – you just need to understand that you can do it.

With the 130mm travel fork the opportunities to ride these trails as you get more confident will increase and so will the fun with little to no impact on the ability to climb. On the 130mm travel fork it was a little disappointing to see that our test bike came with a SID Fork that could only be used at a maximum of 120mm of travel thus meaning if you bought a model with this fork, you would be out of pocket looking for a new fork in future not just the cost to increase the travel.

Judged on the geometry and travel changes alone, the update to the 2022 Trek Top Fuel doesn't seem like a big deal. While the previous model is quite capable, you become aware when pushing it hard it is a cross country bike and it's probably not designed to do what it's capable of doing, whereas the new version is designed to do what you are doing and probably more. I spent a lot of long hours in the saddle doing technical climbs, fire road climbs, long fire grinds as well as hitting up some rough technical trails and even some decent size jumps which I would not have done on the original bike. The Top Fuel never really felt out of place so this begs the question who is it for? I guess this is where terms like Down Country come from, we love to give terms to things when we don't really know what it is and that's how genres are created. Call the Top Fuel what you will but I remember when Enduro races came around and it was this new great category which was riding up hills and then racing down hills as fast as you can and I thought to myself, isn’t that just riding your bike with your friends? Well, we're back there again with Down Country if you want to call it that. This bike is awesome at ripping trails with friends, and finding your limit.

Something that this bike excels at is climbing and I guess it could be its old cross country heritage poking through, but it is also really fun hitting fast corners and tight rocks gardens. That’s what makes this bike so good. The Top Fuel really is a bike for many people. It hasn't been touted as a race bike but if you want to try a cross country race on this bike, brilliant, give it a go. Or perhaps you're not particularly into that idea and you like doing some jumps and going down technical trails then it's probably still the bike for you. Alternatively, with the entry point the Top Fuel 5 coming in at $3499.99 (our 9.8 XT test bike came in at $8,299.99) you won’t be totally broken hearted if you end up growing out of it. In a positive sense the Top Fuel could be your gateway, it could be your gateway to Enduro or it could be your gateway to cross country, or it could just be the bike that you always go and grab because it is so versatile and fun to ride.