A bold as brass indoor trainer with an expensive price tag to match. Can it take the watts.

In recent years, smart trainers like the Wahoo Kickr and the TacX Neo have led the way, and it is difficult to go past an indoor trainer those of us who seek fitness but have to fit it around other life commitments, like family and work. Would TechnoGym’s pedigree of trainers–having developed the iconic SPINTRAINER from the 90s–mean that the MyCycling can compete with the modern-day smart trainer? We unboxed it to find out.

TechnoGym have certainly channelled the aesthetic needs and wants of many high-end cyclists; the unit is compact and sleek and with a weight of 18kg, on the lighter side for a smart trainer. The silver alloy body and large (5kg) magnetic resistance flywheel–which has a maximum power output of 2100w and maximum slope of 15%–are matched with subtle graphics; in essence this is a trainer that would look the part in an art gallery.

Setting up the unit was a ten minute affair; simply select where you’re putting it (near a power cord or grab an extension lead if required), pull out the stabilising legs (which fold up neatly for storage), select the correct adaptors, and away you go. The MyCycling comes with standard QR mounts and 142x12mm through-axle.

The trainer is supplied with an 11-speed Miche cassette, and is operated through the MyCycling app, downloadable through the apps manager on your smartphone.

Once I had set up the trainer and downloaded the app (available for both Android and Apple products), the first thing to do was to complete a testing session in order to calculate power-based zones to be used with the sessions on the app. For those who know their threshold value for an indoor trainer, you can skip this point, however with the MyCycling app being accurate within +/-1%—it's more accurate than most crank and pedal-based power meters.

Though it was equipped with an 11spd cassette and the main test bike was running SRAM Eagle, the direct drive resistance meant that gearing difficulties weren’t really an issue: just find a cog that works and turn on the App.

TechnoGym offers two tests to assess threshold power: the TechnoGym Maximal Test (requiring a heart rate monitor) and the Functional Threshold Power test. As we had a heart rate monitor and had previous experience with lab-based graduated exercise testing, I selected the maximal test.

After 5 minutes spinning at a self-selected wattage, the test protocol increases power at a rate of around 15w/min until exhaustion. Anyone who has completed a lab-based VO2 test knows what the step test is like; and the MyCycling test is spectacularly similar to the lab-based tests; if anything the power steps seemed smoother and less clunky than the Lode machines in a lab.

Once your cadence has dropped below 85 or you have straight-up blown up your test is over, and the MyCycling app assesses the result for heart rate data, and computes your threshold result from this. Considering it’s an algorithm rather than blood lactate testing and/or gas exchange methods, I was  surprised that the VO2 max estimate matched up to previous experiences in the lab; and the MyCycling was right on with my current threshold power and heart rate. Upon the completion of the test, the app gives you a list of this data including cadence at threshold, power at threshold, max power, VO2 max, threshold and max heart rate and automated heart rate zones. Put simply: it’s a data junkie’s wet dream.

With reproducibility in mind, I completed the test twice and had different results, however this is more likely a result of differing environments and variables (test completed in ambient 36 degrees versus 26 degrees, with one test completed fresh and the other, flogged) than inaccuracy of the trainer.

The Functional Threshold Power test emulates the standard 20min power test  pioneered by Allen and Coggan, typically undertaken by athlete’s training with power metres on the road; and upon completion of the test automates a threshold power wattage from the 20min average. This test has the advantage of not requiring a heart rate monitor

Once you have completed the test, it’s time to delve into a variety of programs and sessions. The App has multiple programs, including training plans for a variety of goals. Programs range between one week and eighteen weeks, and have varying focuses. These included their flagship TechnoGym Neuromuscular Training (18-week training program), King of the Mountain (focusing on increasing threshold and super threshold values) to Grand Fondo Strade Bianche (for sportive riders) and Agility (focussing on training cadence variation at different power zones), to name just a few.

The App also includes pay-per user options for individual programs by linking up with a coach, allowing users access to a different range of programs to suit their needs. MyCycling has advised they’re rolling out the coach function shortly within Australia.

There are also two non-programmed options: ‘Slope’ and ‘Power’ which allows you to ride at either a gradient or a specified wattage for a prescribed distance or time; as well as several stand-alone casual sessions. As yet, third party training sessions from coaching apps like TrainingPeaks, are not compatible.

The programs work with traditional progressive overload principles common to most cycling programs and rely on knowing your threshold power and cadence; so doing one of the tests is important.

We selected a few individual sessions to try from the ‘Agility’ and ‘King of the Mountain’ programs, as well as the ‘Uphill Interval Training’ Session. 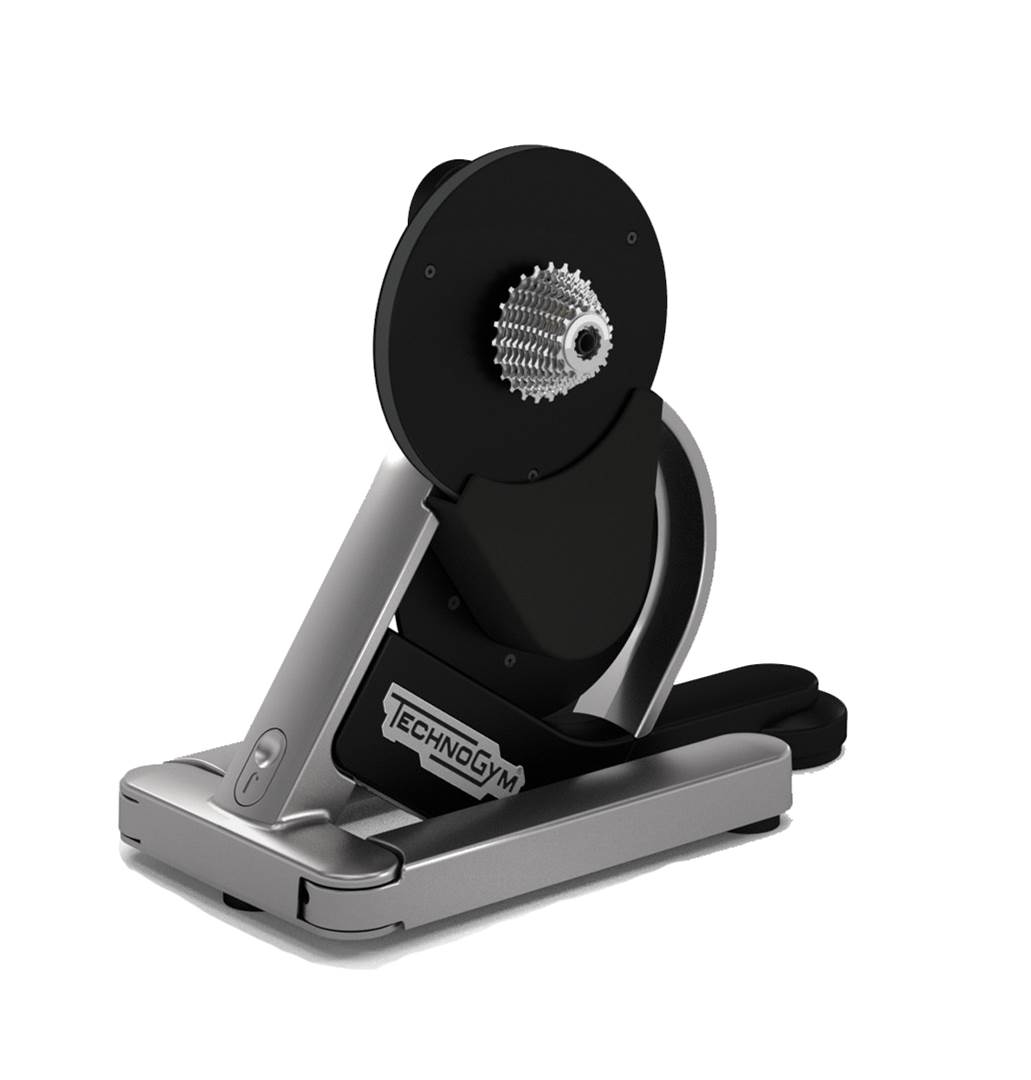 When using the App within a session there are three screens to toggle through, the first featuring current output in a list format, the second page featuring the next upcoming steps and the third a pedalling dynamics page.

I found the middle page, with the upcoming steps and workload and visual representation of heart rate, power and cadence, to be the most intuitive and helpful throughout the sessions.

Unlike a standard trainer, the smart trainer doesn’t let you freewheel or slack off between efforts, it merely cranks the power down to 50% threshold value for recovery; a rude awakening for those of us not used to this or taking advantage of very light pedalling/stopping pedalling for short pauses between efforts.

For bang-for-buck this was great as it really meant you could squeeze out every last watt in a session.

The sessions themselves certainly weren’t easy; using the threshold power many of the sessions were based upon moving from aerobic to anaerobic work with short recovery sessions. With the MyCycling’s cadence capabilities the Agility session focussed on varying cadence at a range of power outputs, and the designated cadence target certainly added to the appeal and challenge of completing a session.

The trainer was relatively quiet, as most direct drive trainers are, and the resistance and pedalling had a realistic road feel.

MyCycling features a sophisticated cadence sensor which can instantaneously feedback torque, cadence, push and pull; and left and right power outputs; with visual feedback in app. While I don’t feel this is revolutionary (after all most dual sided power metres will give you an indication of pedalling metrics when used together with power analysis software), MyCycling is certainly more sophisticated in pedalling dynamics when compared to other smart trainers like the TacX Neo or the Wahoo Kickr.

Pretty but not flawless

Our experience with the MyCycling unit were mostly positive, although the unit isn't compatible with a Boost 148mm bike. TechnoGym assured us the unit could be shipped with an adaptor for boost compatibility.

I found my disc caliper on my road bike reduced the clearance of the handle on the MyCycling unit, so I had to use my cross-country bike on the trainer. This isn’t really a problem with a direct drive unit as a mountain-biker (as gearing doesn’t contribute to resistance), but I would caution those with disc brake road bikes and/or Boost-equipped mountain bikes to check compatibility before purchasing the MyCycling trainer; TechnoGym has assured us that many disc-road models are compatible.

We did fail to have a Garmin heart-rate strap pair with the unit. Fortunately, a Wahoo strap had no problems pairing.

The compatibility with Strava and Swift is great, but at this stage third-party training software apps aren’t supported (such as TrainingPeaks and Today’s Plan).

A Gucci Trainer for the indoor athlete

For the discerning athlete this is an amazing traininer. But as it can't work with third party training apps, if that athlete wants to follow their independent program this could be a deterrent. For those looking to complete steady-state sub threshold training, for example for time-trialling, there appeared to be a hole in the MyCycling’s offerings. And at a retail price of $2255, I feel these are legitimate concerns.

However, the pedalling dynamics, aesthetics, accuracy, testing programs, 2100watt maximum power, and light weight certainly tick the boxes for the unit to be top-notch, and the App is sophisticated and offers a wide range of training programs and sessions that aren’t behind a paywall. These are probably more than adequate for many athletes looking for a series of sessions to aid top-end progression or the recreational rider looking for a wet-weather option.