Great fit and comfort, allied with excellent grip off the bike and highly breathable.

Shimano are known for making long-lasting and reliable mountain bike footwear, and their recent rejig of their whole range of cycling shoes has brought updated technology from the top of the range down to the bottom - from all-mountain shoes through to trail shoes and XC slippers like the S-Phyre XC9.

More than just a basic upgrade, Shimano have changed the whole shoe, on the upper they moved from two velcro straps and a buckle to two BOA dials instead. The full-carbon midsole is thinner, which means you’re closer to the pedal axle, and the outer sole is Michelin rubber, complemented by ports for two toe studs on each shoe. The tread is all pretty low-profile, and the toes have a small bumper for extra protection. 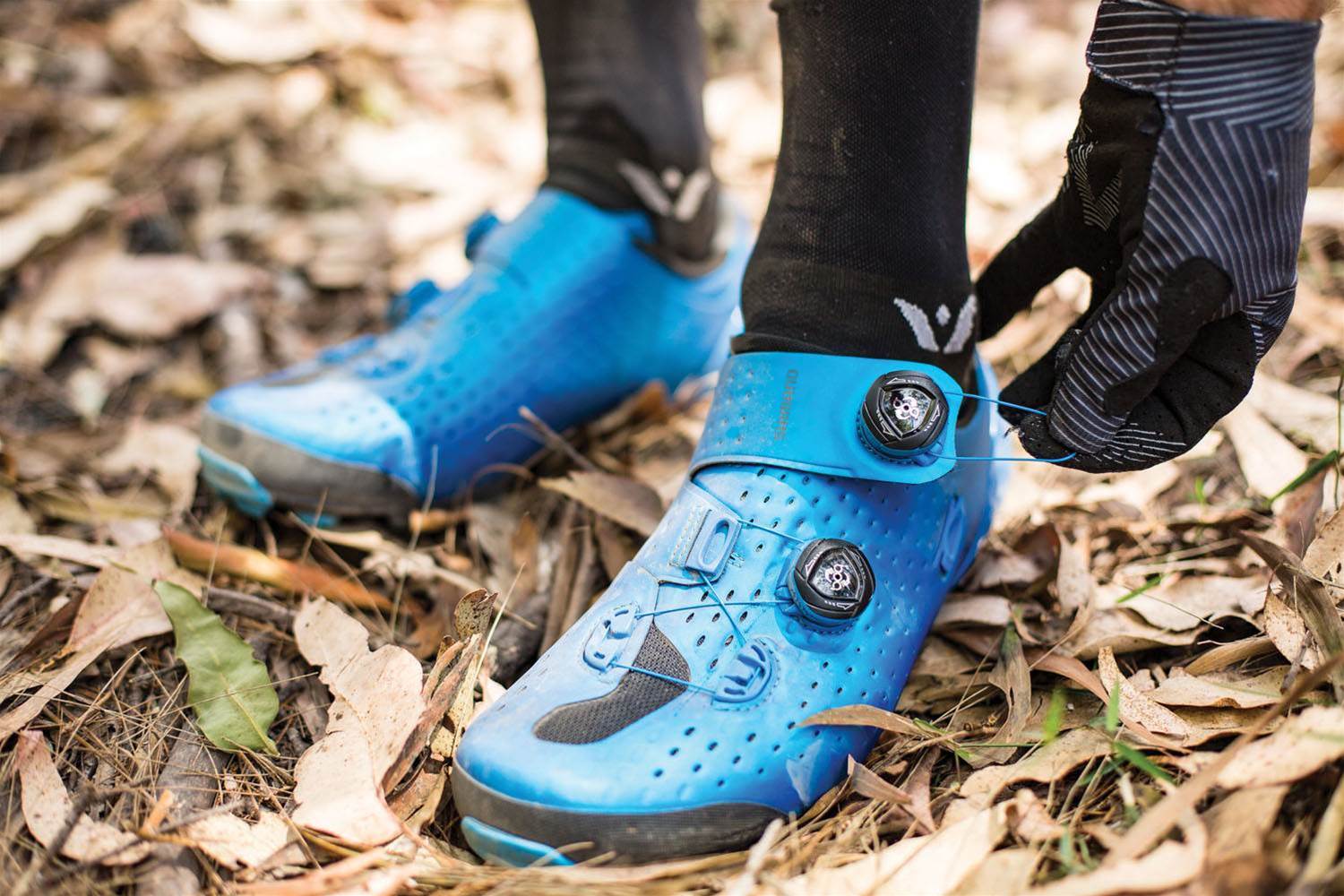 The upper is two piece, and wraps over your foot, without a normal tongue. The BOA dials cinch down on the two-piece upper via six points and with the simple release function they are quick to put on, quick to pull off.

I bought a set of the S-Phyre shoes to replace my Shimano XC90 shoes. In a European 44 (wide fit), with changeable arch support, they felt exactly as they should on my feet. I run the middle arch support but the shoes come with options for more or less support, a shoe bag, toe studs and matching socks to promote the cooling effect of the shoes.

As they looked so flash the shoes stayed on the shelf until the recent Crocodile Trophy, where I subjected them to eight days of intense use - from an XCO race at Smithfield, to four days of back-to-back 100km+ races with hike-a-bike and river crossings, all the way to a mountain bike time trial.

In wet creek beds and over wet logs, the Michelin outer sole gripped admirably – certainly a lot better than the previous XC90 model. I didn’t get to use them in much mud, but the open tread should clear well in anything but heavy clay-based muck.

Day in and day out the shoes were given little thought - which happens when racing. Easy to put on, easy to take off, they dried well after a clean (or dunking) and I only had a slight sensation of ‘hot foot’ on one day when riding for over five hours in 30+ degrees. With plenty of time off the bike on steep terrain, the heel cup played its role, especially with the inner gripping so well.

The front of the XC9 didn’t fare so well and both toe plugs rattled out. The carbon is torn up and parts of the upper are gouged inside the arch and at the heel cup. 30+ hours of racing and thinking about forward progress on and off the bike, and not about precise foot placement will do that. These are a race shoe and that’s what the test period involved. 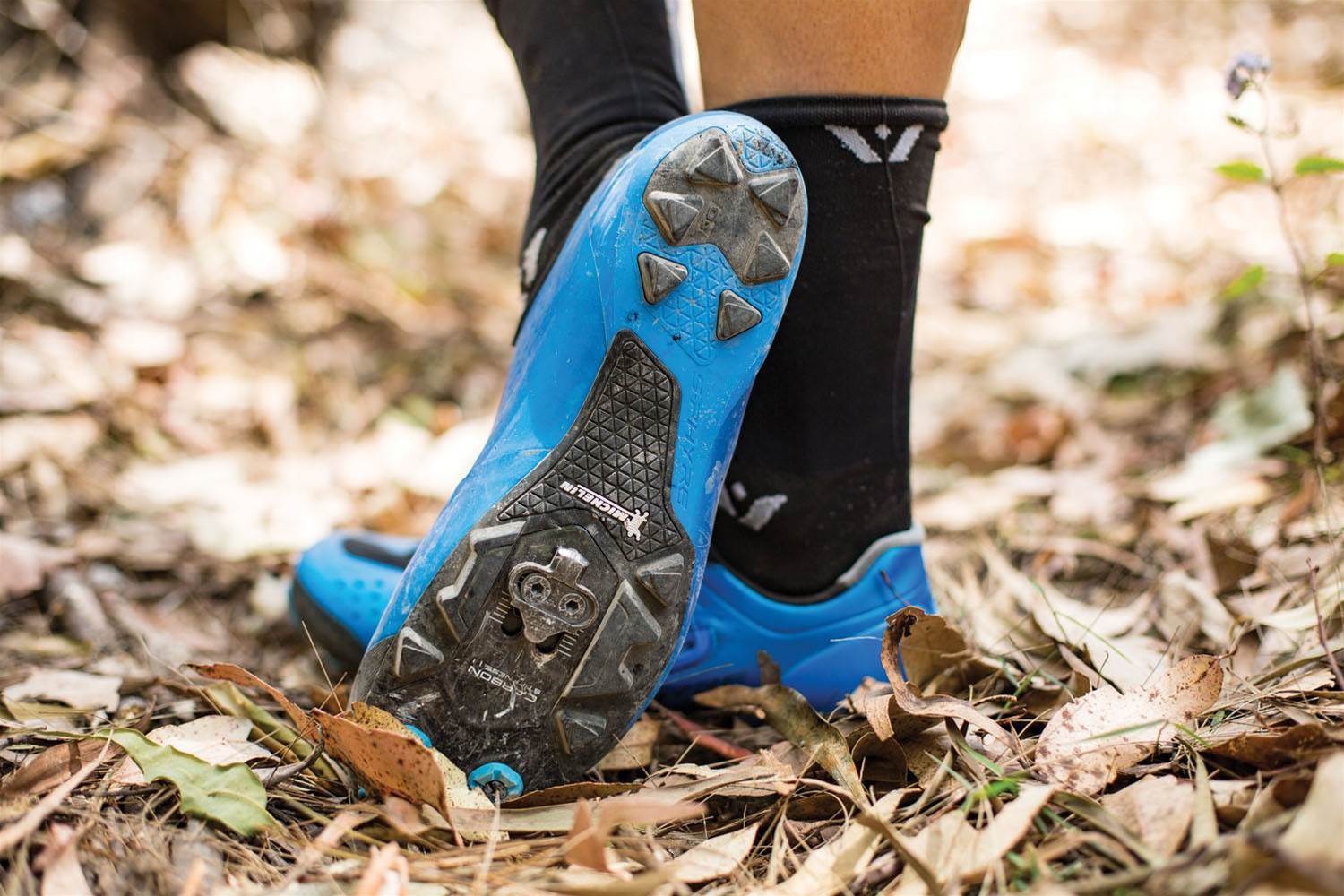 Coming home from the Crocodile Trophy with a set of $449 shoes in useable but very used condition leaves me with mixed emotions. The XC7 will give you a lot of the features of the XC9 for almost half the price, and that’s probably the choice if you’re doing more adventure-based mountain bike events. But if you want the best, no-compromise footwear then I think you should try a set of the S-Phyre XC9 shoes on at your local Shimano footwear dealer. They were comfortable out of the box and at no point did I need to think about my shoes – they did their job flawlessly.

- Excellent grip off the bike for an XC shoe

Misses
-    Lower tread height leaves some of the upper exposed

-    Expensive, but similar to the competition.