Marzocchi is back, and sitting under the wing of Fox has allowed them to dive deep into the parts bin of the suspension giant to create a gravity focused range, and it’s an upgraders dream promising great value, reliability and tried and tested performance. The extremely targeted offering is made up of the iconic Bomber Z1, the Bomber CR (both on test) and the newcomer 58. They are all being offered as simple, cost effective and reliable after market options. If you have a faithful old steed that needs a new spring in its step or just want to upgrade your bikes off the shelf suspension, Marzocchi may have a way to revive your ride. With a neat and no fuss appearance that is absent of lockout levers, excessive dials and doodads the CR is aimed at the rider that wants to spend more time riding and less time fiddling. With the heart of the Fox Vanilla RC riders, have rebound and low speed compression (LSC) adjustments, along with spring preload. The best feature of the CR is the absence of features, setup is as easy as it can get. Just mount it up and set the rebound before you go. If required the low speed compression adjustment is easily accessible via the gold dial on top of the piggyback reservoir. Like the CR the Z1 up front is a similar no fuss affair with just rebound and low speed compression dials. The Z1 utilises Fox’s GRIP damper with an infinitely adjustable LSC adjustment that does double as a lock out lever not that we would use it for that. We added two volume spacers bringing the total to three as I have in my Fox 36 and had them setup in no time at all. The fork chassis is extremely similar to that of the 36, with a less elaborate through axle, black stanchions and a crown arch that looks a little more Marzocchi. With the 550lb spring mounted up on my Stumpjumper 29 we went to the trails. At the very start of the first climb, I reached down for the lockout lever and a quick fumble later I realised there isn’t one. No matter, I keep pedalling. It’s super dusty and blown out on the climb and I’m surprised with the amount of grip that the coil shock is providing due to its super supple nature. The bike sits into its travel a bit further with the odd pedal strike and weight shift onto the nose of the saddle but the traction is great considering the loose climb. Again I reach down to unlock the shock and fumble around before the first descent and realise that it has been way too long since my last coil shock. From the moment I dropped into the first section of trail, the Stumpy’s feel was different. More planted, more sensitive and more like it was resting on a coil. The Bomber CR was noticeably more sensitive than the RockShox Deluxe and Fox DPX2 that I have switched between on this bike and has a certain liveliness about it that makes the trail more of a playground. The bike was transformed into a more confident descender than when it was equipped with the DPX2 and felt like it had more than 140mm of rear wheel travel. This complemented the 160mm Z1 we had on the front beautifully and made the entire package feel incredibly plush and capable when the going got rough. The Z1’s GRIP damper requires very little breakaway force which relates to a very smooth and controlled feel on the trail. I found that both Marzocchi units excelled at tackling low to mid speed technical terrain by remaining smooth and composed finding grip on all surface types. Pointing the bike into bigger rock sections the Z1 did dive more than I am used to but remained controlled all the same, the shock was brilliant with a few clicks of LSC and it was evening out some sharp edges nicely without bucking offline. Into the jump lines and the Marzocchi duo is spot on, pressing into kickers and nosing into landings with confidence and the right amount of forgiveness when things got squirrelly. With little high-speed terrain at Stromlo Forest Park, I took the Marzocchi’s to Thredbo for a day of lifted runs in choppy and dusty conditions. This is where the GRIP damper equipped Z1 can’t keep up, the successive high speed hits from braking bumps and poor line choices push the cartridge outside the comfort zone. Increasing the LSC did help a little, however with no indications on the dial it was a guessing game that was easily bumped out of whack. While the dial didn’t move by itself, the smooth action and super large lever moves if you look at it too hard and it’s a total guess where in the range of adjustment you are. In some high-speed hits I noted a very slight but still audible spring rattle which we believe to be from the spring backed internal floating piston within the GRIP cartridge itself. This aside, it was infrequent and probably asking too much from a trail bike and at $1150 the Z1 is exceptionally good value.

The CR was an absolute blast and likely the reason things were getting reckless with its downhill bike feel. The consistent damping even on over 8 minute runs was a welcomed relief over an air shock that gets mushy and tends to buck around toward the bottom. The piggyback reservoir did get pretty hot but never to the point that the damping was compromised. A couple of rides later and the CR started making a clunk, a few turns further and the love affair was over with a springy ride back home. Express post pack and a quick peek inside at FOX/Marzocchi service centre found a seal amiss, was it rowdy runs or an assembly mishap? The problem was rectified and the shock returned within the week, performing perfectly ever since.

Despite the odd complaint from the Bomber Z1 when bombing downhill trails, janky tech trails and jump lines over the last few months Marzocchi have absolutely nailed this package as a high performance and simplified offering at a fraction of the price of other brands top of the line suspension If you’re in the market for a new fork or shock that will meet the demands of the modern trail rider or park junkie you should put this on your list. The simple approach of set and forget adjustments is welcomed in a world of excessive dials and tech jargon, set the rebound and sag and ride your bike, it's that simple. I would have loved to see more of a homage to the M arch of old, an integrated fender or a FIT4 damper in the Z1 however these can all be overlooked when learning that they cost $1150 and $499 with black steel spring  and how many aftermarket size options will be available. Marzocchi have released coil kits for their Bomber Z1 forks, plus you can now buy the big fork with coil as stock. Check out more details HERE 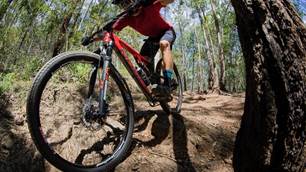