Much like the ‘Enduro’ craze a few years ago, there’s more products every year adopting the ‘eMTB’ title.

The Fi’z:k Aidon X3 145mm eMTB Saddle is one of these products, although there is some merit to an eMTB saddle having slightly different features to a traditional saddle.

Much like the popular Specialized Power Saddle range, the Aidon range from Fi’zi:k is based around a shorter length, with a wider rear. The saddle comes in 145mm and 160mm widths, and Australian distributors Advance Traders are bringing in two models. The model I have on test here is the X3, which features K:ium rails and retails for $249.95. The X5 model retails for $189.95 and uses alloy rails.

The Aidon X3 weighs in at 249 grams, so it’s no featherweight (Fi’zi:k’s Tundra M1 cross-country saddle weighs in at 160 grams). That’s not really the intention with this saddle though. The Aidon range priorities comfort, stability, steep climbing support, and descending flexibility over weight.

How does it achieve those aims? Well, the first thing you’ll notice about the Aidon, and its something that’s ubiquitous in the eMTB saddle market is the raised rear. This is done to provide more support on the steeper and more technical climbs you can tackle on an eMTB, and it achieves these aims well. On some very steep climbs I felt well supported by the saddle and I ran out of talent well before I felt like I was sliding off the back. Other saddles featuring a raised rear include Canyon’s SD:ON Saddle they spec on their eMTBs, and Ergon’s SM E-Mountain Sport Saddle. 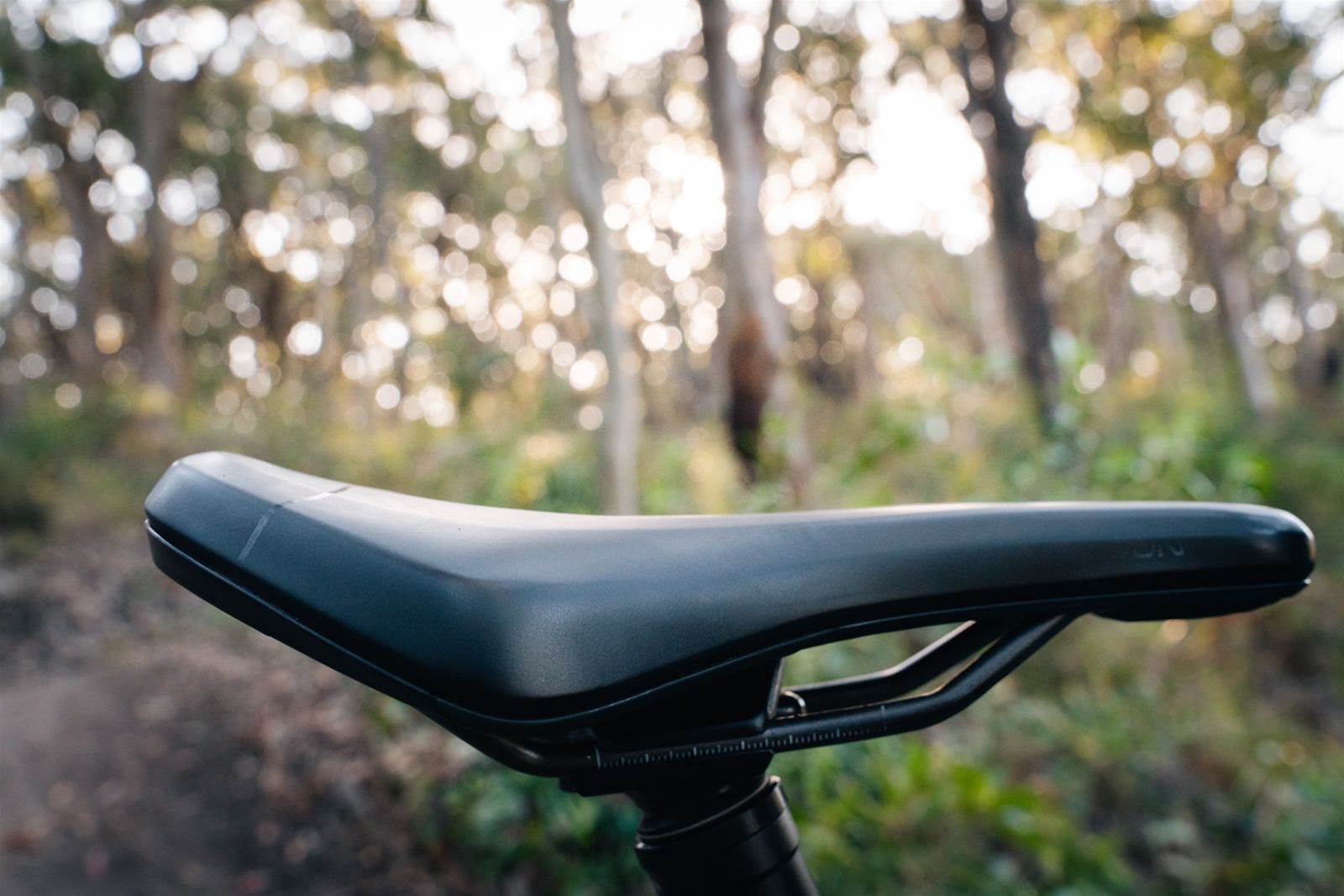 The Aidon’s padding and centre cut out proved very comfortable for the additional time spent seated on an eMTB, as well as the more upright position adopted when riding an eMTB. Obviously, a saddle’s comfort is a very personal thing, but I didn’t notice any bedding in period jumping straight onto the Aidon for a three-hour ride. Fi’zi:k have used more foam around the ischial (sit) bones area to achieve this comfort, as well as a more compliant shell than you might find on other saddles, which is assisted by the use of Fi’zi:k’s Mobius closed loop system.

The Mobius closed loop system means the saddle rails are joined at the rear of the saddle in a closed loop design, as opposed to inserting into the shell of the saddle separately. Fi’zi:k claim this design adds strength and comfort through additional compliance, and the Aidon is certainly very comfortable so it’s hard to argue with those claims! 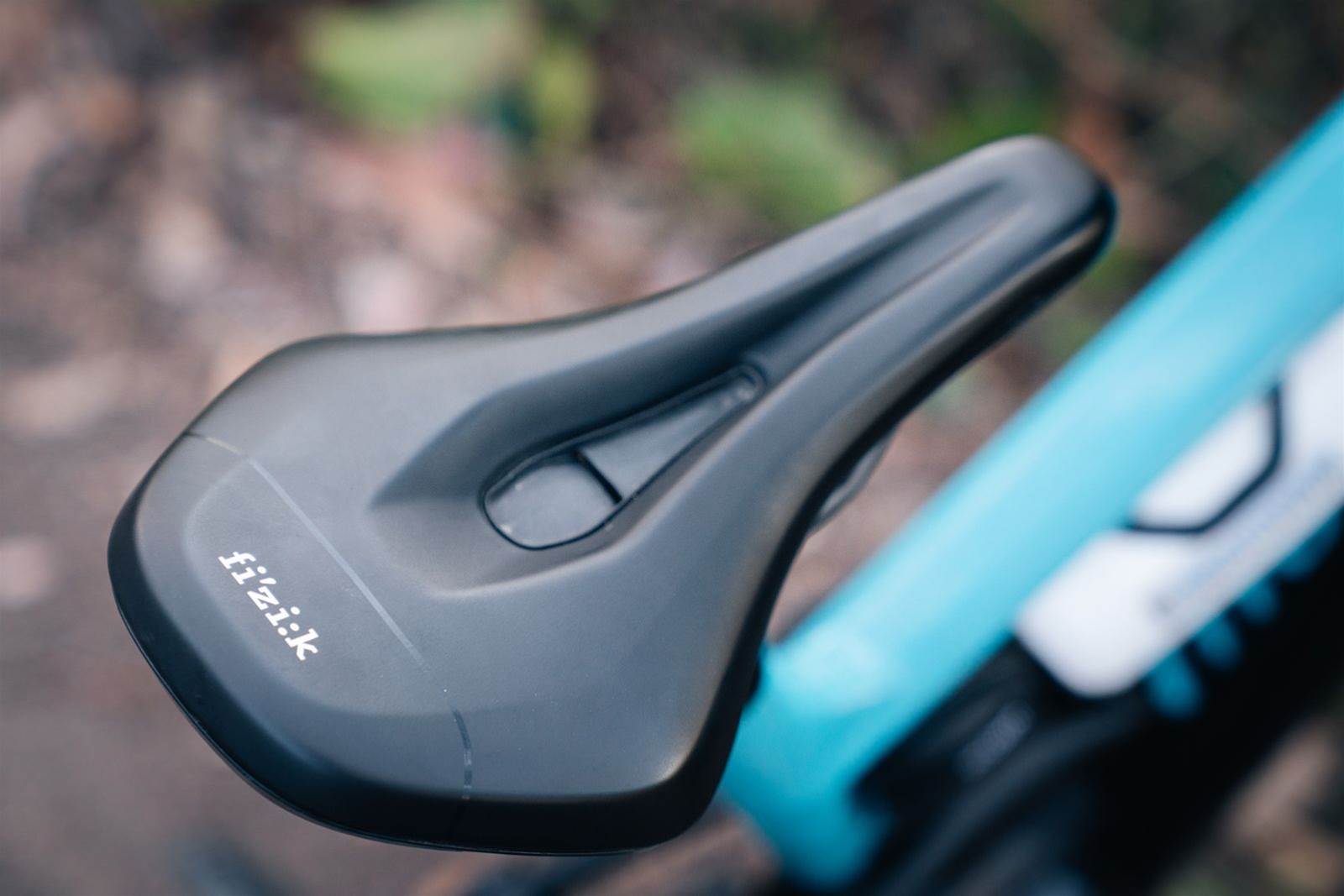 Obviously, a saddle’s comfort is a very personal thing, but I didn’t notice any bedding in period jumping straight onto the Aidon for a three-hour ride.

Another claim Fi’zi:k have made with the Aidon range is that the subtle flex of the wings are an aid when descending, by allowing a smoother transition for a rider moving from in front of to behind the saddle. I didn’t really notice this when descending, but at the same time that indicates the wider rear doesn’t get in the way either.

Overall, the Fi’zi:k Aidon X3 was easy to get along with, and I appreciated nice touches like the steep climbing support and added compliance. If the $249.95 asking price is a bit steep, the X5 could be a good option at the lower asking price of $189.95, as the only difference between the two models is the material the rails are made from. The saddles are in stock now and available from local bike shops nationwide.