A high expense. Does the ride quality of the BMC teamlite 02 make up for a mid range parts spec? BMC are a Swiss brand, and a company known to have an eye for detail, with a range of cross-country, trail and all-mountain bikes in their range. We tested the fourstroke FS 01 a year ago, an excellent example of the Swiss brand’s devotion to precision manufacturing and ride quality. BMC were the first bike brand to get multiple World Champion, World Cup winner and Olympic medalist Julien Absalon off a hardtail and onto a full suspension bike – that bike really showed us why.
The teamelite 02 XT is the second hardtail in the BMC family, the teamelite 01 sits atop the range of 29ers, offering the MTT (Micro Travel Technology). It’s a short elastomer damper that runs on two compression rods at the top of the seat stay, relying on the compliance in the stays that is tuned via tube profiles and carbon lay ups. The teamelite 02 frame has the tubing profiles, but is a fully rigid carbon hardtail, designed around all out race performance like it’s elastomer damped brother.

Business in the front

I first spied this bike under Swiss rider Alexandre Moos at the Cape Epic, before it was in production. What really made it stand out was the absolutely massive down tube, meeting a short head tube and flared seat tube. The emphasis is on steering and pedaling precision, and comfort up top and out the back. The top tube is quite slender, and the seat stays are flat and small, shaped exquisitely for disc clearance and to avoid the chain hitting them.
The larger chain stays carry a neat 142x12 through axle that nestles flat against the drop out, while the derailleur hanger is alloy and plugs into the frame and the axle runs through it, which aids shifting precision. The disc mount sits inside the chain stay and is designed around compatibility with a 140mm rotor. The chain stays are shaped for mud clearance, which looks good despite running a 2.2” tyre – they’re rated to a 2.25” maximum. Frame weight in medium is claimed as 1150g.

BMC call their internal routing DTi, or Dual Transmission Intergration. There’s a big port on the underside of the down tube, with cables exiting near the bottom bracket shell. The entry port’s central location means that the bike won’t look weird with left to rear braking, unlike some Euro and US brands. It’s set up to take a hose and three full-length cable outers, with the front derailleur port designed around an E2 Shimano Side-Swing derailleur – which is smart. They’re the best shifting front mechs available. The brake hose and rear outer run from the bottom bracket shell externally. The DTi setup will work just as well for a 1x application, or Di2, and you can slide a dropper outer/hose down there too. Julien Absalon does so on his TE 01. Dropper posts have arrived in XCO, and they’re being used to win World Cups and Olympic medals – you’d be silly to not look for compatibility on your next XC bike. BMC saw this coming three years ago when designing the frame. The seatpost is 27.2mm, which does limit dropper post choices, but helps with ride compliance with a rigid post. As you would expect, there are 2 bottle mounts, and the top tube has a slight drop to it for standover clearance.

The teamelite has a purposeful stance, and while you could look at it and say ‘it’s just another hardtail’, a look over the geometry shows it isn’t. Like many modern trail bikes, and modern cross-country full suspension bikes, there is an emphasis on a longer top tube, shorter front end and tighter back end. BMC are committed to the 29er wheel size for their XC bikes, thanks to the extra speed in rolling they deliver.

BMC’s long front centre equates to a 630mm top tube on this large, but with just a 110mm head tube in the large (in hindsight, I should have tested a medium). It doesn’t feel too low with 61mm of bottom bracket drop, placing you well below the height of the hubs. The head angle is 70 degrees, which is pretty middle-of-the-road on current XC bikes. But matched with 51mm offset forks (like Trek, Norco, Lapierre and a few others) it adds greater stability than the head angle number would suggest, using a short stem (70mm) and wide bars (720mm) to add speed to the handling.

Up front, the Fox Float 32 SC Performance has Boost spacing (although the frame doesn’t) and a remote lock out. It feels just almost as good as the Factory version tested last issue, but does miss out on the fine tuning for compression damping, and doesn’t quite have the same supple feel.

Shimano’s 2x11 mix of SLX and XT is an excellent match of performance and value. The Side Swing front derailleur offers effortless shifting, and with the close 11-40 cassette you’ll always have the ratio you need. Don’t like it? See if your BMC dealer will fit the new 11-46 cassette and a single ring for you. The frame can take up to a 36t single ring, and you’d have to really be someone to need bigger than that. 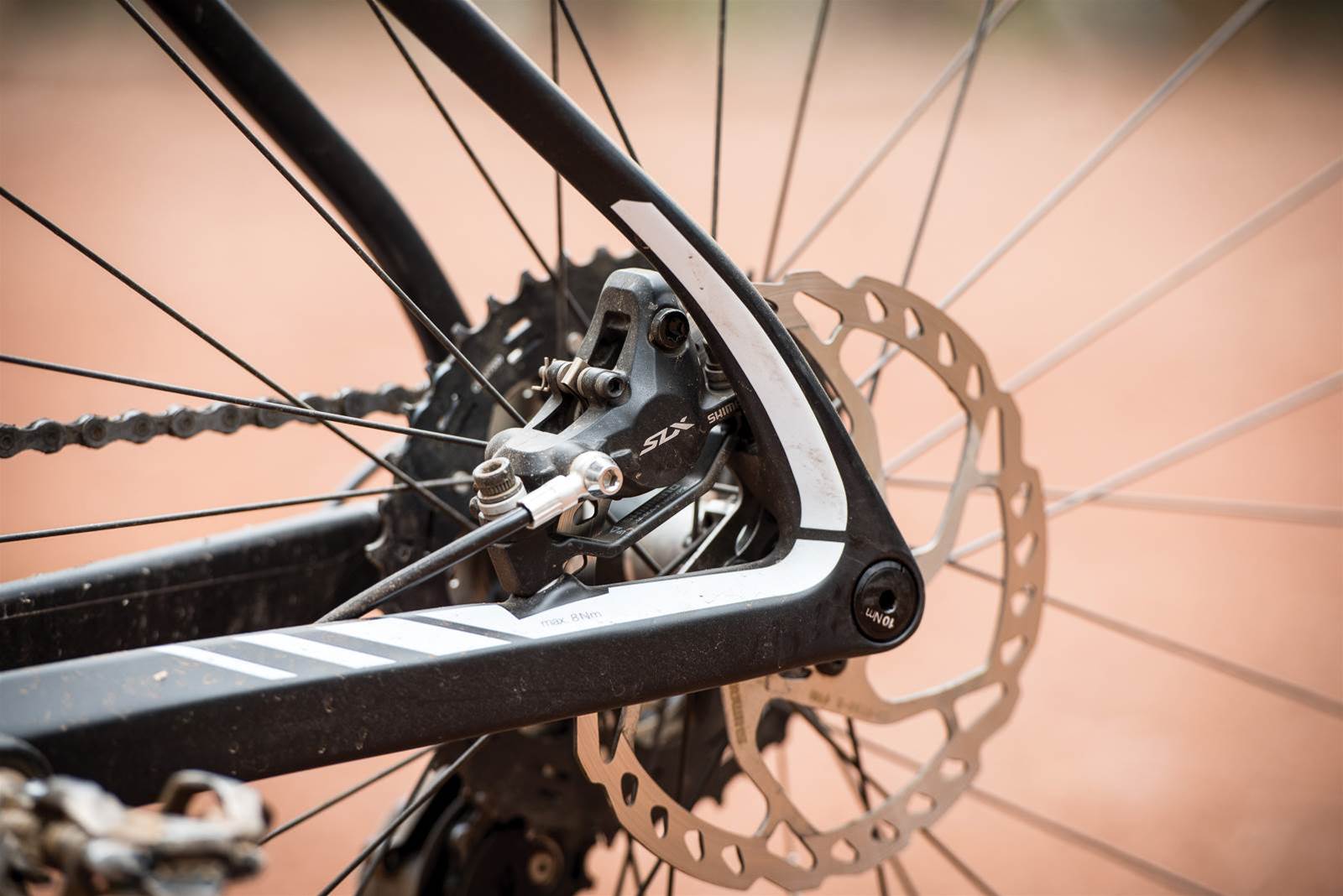 DT’s Spline X1700 wheels don’t look exciting, until you realise they are strong rims, laced to DT’s hubs with star ratchets. They beaded for a tubeless set up, and the DT valves work well, but I found Stan’s universal valves worked better. I had poor luck with keeping the Race King tyre seated on the back, so swapped it out for a Maxxis Ikon. At 20mm the internal width isn’t quite where most manufacturers are moving to, but it’s ok for regular XC riding.

Party on the trail

The BMC teamelite has excellent trail characteristics. The combination of the 70 degree head angle, 51mm offset fork, 80mm of trail, short stem and wide bars means the bike is stable at speed, but agile in tighter singletrack – all within the realms of what you would expect for a cross-country hardtail. Save for riding a plus hardtail earlier this year, it has been a long time since I’ve spent so many trail hours on a hardtail - and the TE 02 really impressed.

“BMC was at the forefront of modern XC geometry with its Big Wheel Concept, which many other brands adopted later on. 51mm offset is one ingredient of the BWC recipe, but it does not work on its own.” Said BMC’s MTB manager Antoine Lyard. “Back in the 26” wheels era, our racing team reported that their bikes rode more or less like road bikes with knobby tires. They were fast and nimble, but lacked stability and cornering was challenging.”

So with the move to 29er wheels, 51mm fork offset, a slacker (for XC) head angle, short stem and wide bars, BMC refined their geometry and what the bikes could achieve – over three years ago.

The teamelite really stays planted when carving into turns, and encouraged getting on the gas early coming out of flatter high speed corners to get the tyres digging in again. In short, the teamelite begs to be ridden fast – which is no surprise given its purpose.

While other frames, including the TE 01, allow for more vibration damping through the frame, the TE 02 isn’t bone jarringly stiff on long days. The teamelite feels direct, but that is typically what you are after when looking at a performance hardtail. I didn’t pull up sore even from four hour hilly training rides, so clearly the bike hasn’t been built only with pure rigidity in mind.

The acceleration is astounding, and the bike feels really direct when moving through corners too, with the combination of a long front and short back really coming into play. Despite running a 142x12 rear end, BMC have actually created a shorter rear centre of 429mm, less than some of the current bikes using Boost 148x12 spacing – including the Merida Big.Nine and the Trek Procaliber. Much is often said about 2x group sets, but I found the 2x SLX/XT group on the teamelite was great for the hills west of Brisbane. With an 11-40 cassette and 26/36 chain rings, the spacing was close and finding the right gear was always easy. It would be no problem to get one of Shimano’s new XT 1x11 chain rings and a wider range cassette and chain guide for security. But being able to run both options is excellent for versatility.

The SLX brakes felt almost the same as the XTR trail brakes I normally use, and if I were adopting this bike for racing in Australia I would downsize the rotors to 160/140mm from the 180/160mm stock setup. I would also put a dropper in and run a 34t ring with XT 11-42 cassette, keeping the 2x setup for hard training blocks and super hilly races.

The choice to run a Boost front wheel but not on the rear is a little odd. While fine for how the bike comes, if you’re a dedicated racer and would like to upgrade to a flash racing wheel set, it might mean you’re buying the front and rear separately. Boost did take much of the industry by surprise, and it might be a couple more years yet before it is truly adopted by all brands. Let’s be straight though, the teamelite isn’t missing out on modern handling by not having a 148mm wide rear spacing.

The BMC really shines when being ridden with purpose. While the geometry means it isn’t sluggish at low speed, the teamelite lives for accelerating out of corners, lifting over obstacles, and pumping through terrain to get every bit of speed out of a trail. It’s a modern hardtail, with exceptional handling and a frame that has been designed and built with an eye for detail.

If you looked at the parts list for the BMC teamelite 02 XT you might think it comes up short in value. Sure, you can get a carbon hardtail with the same parts for less. However, you are unlikely to find the same well-rounded parts spec, precision engineering and ride quality. Some light weight hardtails feel underdone on rockier trails and at speed, trading capable handling for some shaved grams, creating a nervous bike. The BMC teamelite is not one of those bikes. The entire spec from frame, fork, wheels and group set are set to perform reliably and with performance that you won’t second guess when putting the bike and yourself under pressure.