See how the MTB industry is looking after our planet!

Climate change came into sharp focus in Australia over summer, and more of us realised that what we do now is going to have a real impact on our environment in the very near future. Mountain biking offers an escape for all of us, but it does not take place in a different world. Any impacts on our climate will have a direct impact on our mountain bike playgrounds.

The mountain bike industry is full of innovation, and full of people working on some cool tech and processes looking to make sure mountain biking is travelling on a sustainable path.

“When I started Why Cycles in 2016, we had a whole section on our website on our commitment to sustainability,” says Adam Miller, founder of Why Cycles and Revel Bikes. “We did things like reusing packaging. We'd get our bikes in here in packaging from China that might not look the nicest, but I thought why not use that when we send it back out?” Even your local bike shop gets inundated with packaging. From bike boxes, shoe boxes, all the packaging that a new group set comes in – it all adds up. Most stores here in Australia use a recycling service, but that's not always possible. Miller composted everything in the office and recycled anything they used as well – but he understood they were just a small company.

18 months ago, Miller launched Revel Bikes as one of 8 people including Chris Reichal, who summed them up as “bike industry veterans, or rejects for lack of a better term”. They are rider-owned and privately funded, which has allowed them considerable scope to operate in their own way. The Revel Bikes Rascal and Rail are full-carbon, high tech mountain bikes using the CBF (Canfield Balance Formula) suspension platform to offer a leading ride quality.

But dealing in carbon fiber doesn't mean they operate without a thought to sustainability. As a direct to consumer brand, Revel already reduce the amount of times a bike freights, in either road or air. And that same process will be done here in Australia via Off Road Bikes Online. “We put the company here in Carbondale, Colorado,” explained Miller. They are in a place which has compost collection, recycling, and a world-class trout stream barely one kilometre from their office.“We're here because nature is amazing.” And that connection with nature is part of what drives them, especially when their connections bring up new opportunities and technology.

“We stumbled across this opportunity to make the new rims right before we launched Revel bikes 16 months ago,” explains Miller. Joe Stanish, one of the founders of CSS Composites had developed a new material and manufacturing technique. “It was a new way of manufacturing a thermoplastic material, and Joe asked if we wanted to be the first brand they partnered with.”

With production able to take place just four hours away and not in Asia, it was already attractive. But this new composite tech also offered a better ride quality by using a nylon agent and not epoxy, plus lower weight and greater strength.

“And then Joe said 'Oh yeah, it's totally recyclable too.' So we knew we had to go all in, and make two rim models right away, and there's a couple more in store that we're working on.”

The new material they are using in the Revel wheels is called Fusion-Fiber, and Revel are the first brand to be using it. The benefits go beyond waste and damaged products being recyclable though. “Traditional carbon manufacturing, so everything except our Fusion-Fiber wheels, is made from carbon with epoxy.” In this process, items need to be sanded down after removal from the mould, and there is a lot of toxic epoxy dust. Working in this way is illegal in many areas, hence why so much production takes place in Asia. “The Fusion-Fiber process is completely clean, the energy input is much lower than traditional carbon fibre, and it comes out of the mould so clean it's completely ready to go. There's no sanding, so therefore no breathing in epoxy.”

If you have bought carbon mountain bike wheels before, you probably understand that they aren't repairable. Failure on a carbon rim is a zero:one sort of situation. They're fine, or they are cooked. So being able to recycle any broken rims is a huge bonus.

“Joe didn't quite realise how cool it was to have a recyclable composite,” adds Miller. “We pushed our manufacturer along and they invested in the equipment to fully recycle the excess materials. There's not a single bit of this material that goes into landfill. Even the little bits that come out of drilling spoke holes, that gets swept up and put in a bin to use. There's a big chipper that is used for any rims we break in testing, along with any scrap. It all gets melted down and turned into anything else.

“We had to experiment with how to make stuff out of the recycled materials, and this is the first thing,” says Miller. It is one thing to say everything is recyclable, but the tyre lever shows that it's not just possible, but is happening. But Miller and Reichal don't expect to be churning out a bunch of tyre levers from broken rims. “They're stronger than any other rim on the market. But if you do break them, we send you a shipping label, they go back to the manufacturer and they get chipped up and made into something like a Revel tyre lever, or a stem, a suspension link,” says Miller.

“There is no reason that this product that we're selling has to ever go to a landfill,” adds Reichal. “It can just keep getting chipped and reformed and repurposed. If it goes to landfill it's because no one wanted to mail it to us.”

Revel are a business, and I had to ask about walking that line between promoting sustainability but also getting people on some pretty fancy new bikes.

“It's a core dilemma of being a business and selling products,” admits Miller. “We aren't helping the environment by any means, we are manufacturing things and selling them. I'd like to think everyone needs the best bike ever, but on some level – they don't. Our bikes have a lifetime warranty and we overbuild them. But we know that we're geeky mountain bikers who love riding the newest stuff.” “We're still a young company and for us environmental friendliness isn't a political statement. If you're buying a bike to ride in nature, you're probably on the same side. We have our core roots here in Colorado where it's very liberal and people like the recyclable aspect, and they like the commitment to sustainability. If we can use our brand and company to talk about it, then it helps. We can say 'buy these wheels as they ride better, they're stronger, they're lighter, and by the way they will never see a landfill, so they're better for the environment'.” And so far, that messaging along with making such good bikes seems to be working.
“Just 6 months in we were selling in 28 states and nine countries. And we have doubled since then. I haven't even kept track of the countries recently,” says Reichal. “Anywhere there are trails, people are looking at our stuff.”

Fast growth in a company can put pressure on production standards, and in this case, ethics. Miller has already told me they are ground shipping their bikes now, for reduced emissions. But can pressure to grow change their ideals?

“I'm sure there will be pressure but we're not going to fall for it,” Reichal states. “It's not how we want to live our lives. We want to do our own thing. We want to write our own rules for the most part, without being jerks about it. We want to do what makes us feel good and lets us sleep at night.” 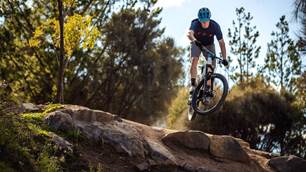 Trails in our own backyard: Stromlo Forest Park

Rick rules the roost in Moruya