The Revel Rascal is a premium trail 29er. And it rips.

Starting a premium mountain bike bike brand in this day and age is a pretty risky move. There are so many quality brands producing amazing bikes, with years and years of experience and customers with outstanding amounts of brand loyalty to them. However, Colorado based brand Revel Bikes have done just that. Starting with just two frames in easily the most competitive segments, Enduro and Trail. You really have to have belief in your concept to take these challenges on and it’s obvious the folks at Revel have bucket loads. From what started in 2016 with niche cycling startup extrodinaire Adam Miller and another niche bike brand Canfield at Interbike. This quickly became the new Revel brand being launched in the first quarter of 2019.

A bunch of other industry heavyweights joined the ranks, with designers and owners from brands like RockShox and Enve jumping on board. They had pretty quickly seen the potential and were keen to bring Millers vision to reality. This did carry with it an intent to not only bring just another couple of bikes to market, but to bring a bike they believed was superior to anything else currently available. After working out a licensing agreement, Revel was then built from the ground up around the Canfield brothers C.B.F (Canfield Balance Formula) rear suspension design. Unlike this acronym’s other more common place meaning, Canfield put a lot of effort into the design working on it from 2008 through to getting their patent finalised and issued in 2015, just before the introduction with Revel’s brainchild Adam Miller. While this is somewhat of a tale of two bike companies. The Canfield Brothers' bike company had a tight focus on small run, quality aluminium bikes. After Miller rode the first manufactured CBF bike, the Canfield Balance, with a few tweaks Miller knew there would be a market in high end carbon. Shortly after Chris Canfield and his brother Lance went their separate ways with Chris taking the patent and with it the ability to license to other brands and Lance taking the bike company but also retaining the use of the patent.

What even is the CBF design you might be asking, and as kinematic designs can be quite complex, I’ll try and make it as easy to understand as possible. The Balance part of the design comes from the virtual point the “centre of curvature” of the suspension arc being placed on top of the chainring. This is where all the bikes' forward forces are derived. In Chris Canfield's words “it kinda balances there” and limits all the forces in that location to just pedal induced momentum. Freeing up the suspension to move as it should, so neither squatting under brakes or rising under chain and pedal forces. Theoretically this means producing a bike that will climb on rough terrain as well as it will descend. So armed with a water bottle friendly, slightly modified CBF design the folks at Revel produced their two new bikes. The 170/165mm 27.5” wheeled Rail and the 140/130mm travel 29” wheeled Rascal. Pleasingly we had the Rascal on test for this issue. 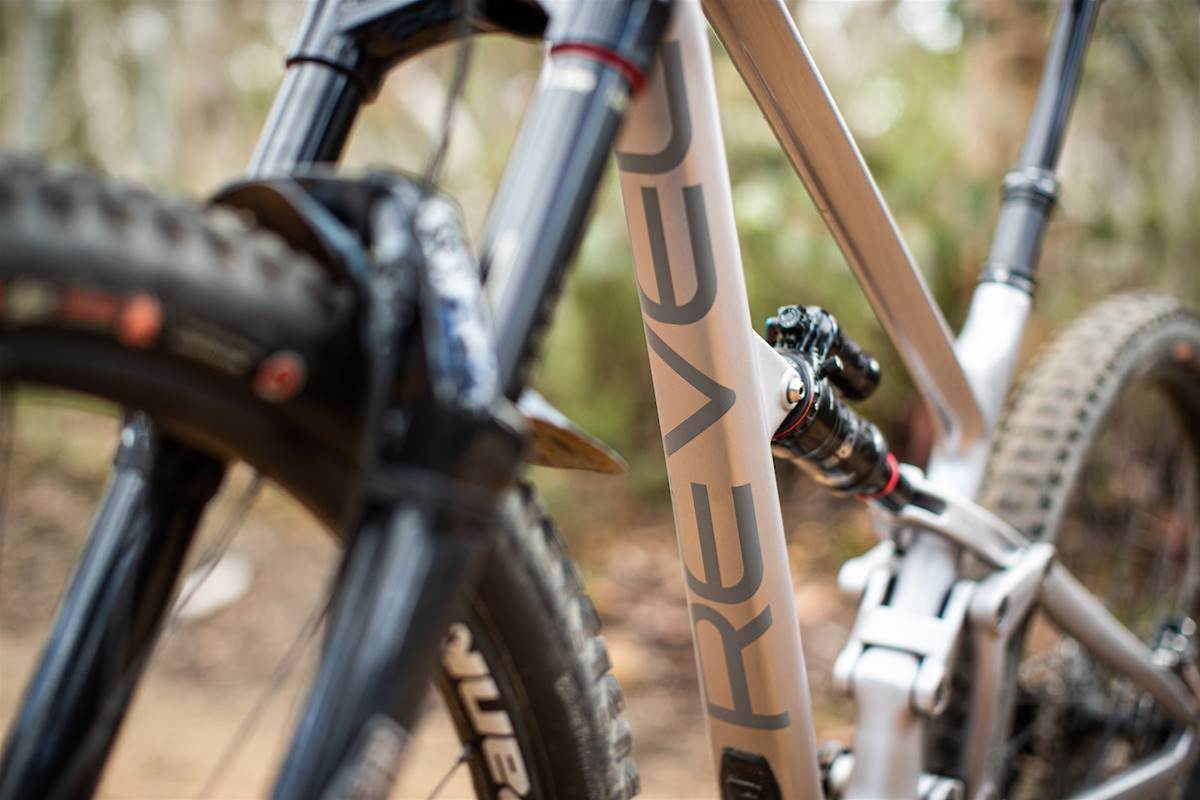 Now that we’ve got the new brand and funky design back story out of the way, my first impressions of the Rascal were great. This review will focus on the frame, as that is the way most people will purchase it here in Australia. Revel is mostly a direct to consumer brand in the US and it will be sold similarly by the new Off Road Bikes Online (ORBO) website here in Australia. With this direct to consumer model the Rascal comes in currently at an enticing $4500 for frame and shock. ORBO will also offer builds with Sram, Shimano, RockShox and Fox for those wanting to get rolling straight away. For the sake of clarity though our Rascal was built with a Sram XO1 Eagle and RockShox build kit, with Spank wheels and Burgtec bars and stem. Revel have done an amazing job with the frame and the Rascal looks extremely clean. With moulded internal channels for cables and brake housings the bike should be as quiet as it is clean looking, and easy to work on. With an integrated head set and threaded bottom bracket you will also have a bike that is easier to work on long term, and this will please many mechanics out there. There is no doubting the high-quality finish, and the feel is similar to those of brands like Yeti and Santa Cruz. Revel have followed the current aesthetic trends with subtle branding letting the bike's performance do the talking opposed to bright colours and flashy logos.

A 31.6mm seat post gives you lots of dropper options and the frame is builr around the now very standard 148mm boost axle. With 130mm of travel at the rear Revel suggest using a 140mm travel fork. Geometry looks spot on and steering clear of any of the extremities with a 66 degree head angle, 75 degree seat tube and 433mm chain stay length.  The reach for our medium frame was 444mm and felt spot on for my 5’8” height and the frame can take up to a 2.5” 29er tyre. Getting on the Rascal for the first time, it is a bike that feels instantly comfortable. There is nothing to get used to and the Burgtec control points felt super stiff and reliable. I have to say 130-140mm travel 29ers have to be my favourite type of trail bike. It’s the perfect amount of travel for Australian conditions and with the extra roll-over ease a 29er gives you, these just ooze speed. Throw in a little CBF kinematics and I was pleasantly surprised.

So what does that CBF feel like? What you'll likely notice is the instant feedback you get when the power is delivered, and then momentum builds from there. I wouldn’t say it was night and day compared to most other standard four bar frames, but you can feel the difference reasonably quickly. It takes a little while to work out the reasoning behind what you’re feeling. Initially when climbing the suspension feels very active and could easily be miss-interpreted as pedal bob, especially on rough terrain. Some other suspension designs have a feel like your suspension gets a locked out due to the forces going through the chain line. While this can feel like a great climbing bike on flat and smooth terrain, move onto a technical singletrack climb and it ends up giving you lots of awkward loss of traction sensations and therefore a loss of efficiency. It is easy to take this as an accepted trade-off, but the CBF kinematics prove that it's not. And it’s only when you get on something different you work it all out and see the benefits. The CBF design on the Rascal still gives you instant forward momentum but leaves the rear wheel to track much more smoothly over square edge bumps in particular. I found technical climbs wheer I’d normally have to fight for traction a breeze to complete cleanly. It’s easily the clearest way of noting the CBF benefits in real world sensations. But that's not to say that the Rascal is just built for climbing.

When it came to descending, the Rascal felt just as impressive, or possibly even more. With similar benefits to climbing although now the pedalling forces are less of an issue. When things get rowdy however, braking forces are the problem that a suspension design needs to deal with. On a lot of other designs these forces may make a bike squat into its travel, making the suspension less sensitive and more likely to lose traction when braking over rough terrain. A prime time for this to occur on other suspension design is on an off-camber, rutted or rooty corner. With the CBF linkage there was a noticeable improvement in this regard, getting the bike to brake traction was difficult. Overall for describing real world feelings, it comes across as just confidence inspiring. You felt like you have more control than you otherwise would on a different bike, and this translates into a better ability to carry more speed on the trail, and probably a higher level of stoke!

Picking lines and changing direction part way through a rock garden are just some of the actions that are a whole lot easier. The other benefit to the CBF design is the rearward axle path the wheel takes when the suspension is compressed. Initially moving backwards and up before it moves forward, and this is critical to avoiding that “hangup” feel you sometimes get when there are square edges to negotiate. Overall the Revel Rascal was a pleasant surprise. Before jumping on the Rascal, I knew nothing of the CBF design outside of its origins with the boutique American brand Canfield. I really enjoyed how the Rascal felt when pushed hard both up and down trails. It had a great balanced feel of what it offered with not a lot of downsides to be seen. The quality of manufacturing is what you’d expect when the ex-owner of Enve is looking after things. I’d have no hesitation in recommending the Rascal to anyone with the dough to lay down on one. Revel delivers completely on what they promise, a classy carbon trail bike with an interesting and efficient design that works. With immense amounts of belief in their product, Revel offer 30 day refunds, lifetime warranties and crash replacement programs on all their frames. With an Australian hire and test scheme in the making, check out their socials to swing a leg over one.  With this sort of backing the Revel Rascal could easily be the last bike you buy for quite some time.