AMB headed down to Derby once more with a small crew of eager riders. All ready to put World Trails latest through it's paces, the new Blue Tier trail.

Much has been written about the small Tasmanian town of Derby since the opening of the first official trails in February 2015. The original 20km network, constructed by Glen Jacobs and the team at World Trail, blew minds. Not just domestically but of even the most well-travelled mountain bikers. And things have only grown. The unveiling of Stages Two and Three, including the unbelievably flowy and atmospheric Atlas trail, put Derby squarely on the international map as a ‘must ride’ destination, and it was with huge anticipation that I travelled to Derby for the opening weekend of The Blue Tier.

DESTINATION DERBY
On paper, if you ignore the next level trail network, the town of Derby doesn’t jump out and grab you as a place to visit. On the slow decline since the dam burst and destroyed much of the areas tin mining industry in the late 1920s, Derby seemed almost destined to fade into obscurity. Having spent a lot of time bikepacking through similar towns in other parts of the country, I guess I was more than a little sceptical about the quality of the overall experience in Derby and hadn’t previously added it to the holiday list for this reason. That now seems like a huge mistake. 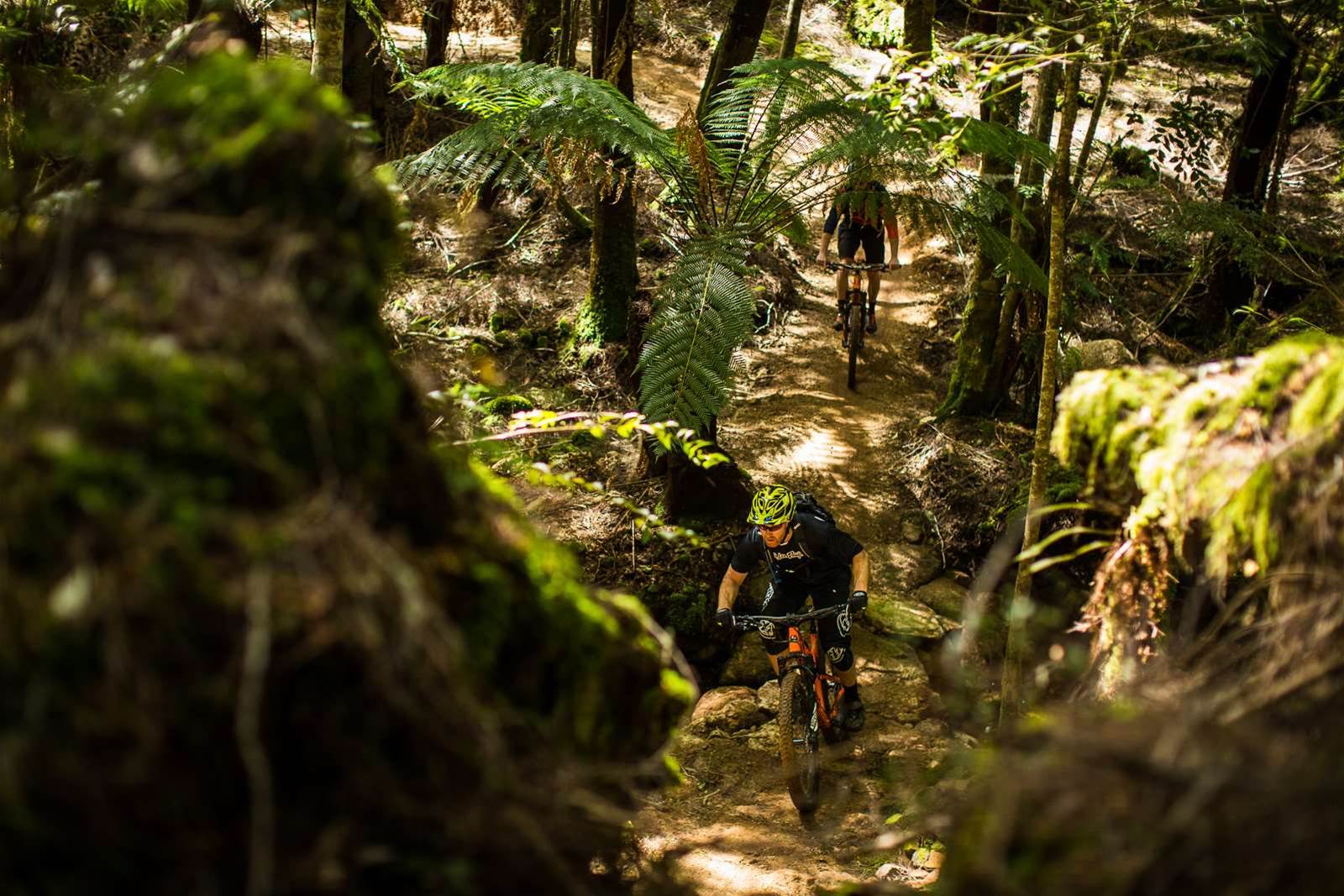 Firstly, getting to Derby was a piece of cake, and that should be true from most capital cities. A painless two hour direct flight from Sydney to Launceston, then an hour and a bit in the hire car sees you at the trail head and ready to ride. This is a lot simpler than heading to somewhere like Rotorua. I was initially disappointed about only having two full days to properly explore the area, but the ease of getting in and out actually makes Derby a realistic option for a long weekend away. All up I managed to squeeze in fourteen hours of shuttle and trail time, with some delicious food and sneaky beers in-between, before heading to the airport on Sunday afternoon! If you’re considering making the trip, but only have a few days up your sleeve, go. Just go.

From the outset Derby has definitely been an experiment in whether great trails, even ones so far from major population centres, can draw the big numbers of riders needed for a town to be sustained almost solely by mountain bike tourism. Even in it’s relative infancy it’s a success story. We’ll get to the trails in a minute (I can’t wait either!) but as far as infrastructure goes, Derby is well on the way to being a mountain bikers dream destination. There’s a well thought out bike wash and shower facility at the trail head, plentiful camping and growing accommodation options. Local businesses have embraced the rising numbers of riders visiting the town and the options for feeding yourself and staying ‘hydrated’ will only grow over the coming months. And they’re going to need to grow fast, because once word gets out about Blue Tier, pretty much everyone that owns a mountain bike is going to make the trip to Derby. If you had to put a face to the name Derby, it would undoubtedly be that of Buck, proprietor of Vertigo MTB. Vertigo are Derby’s original shuttle operators and have been instrumental in shaping the visitor experience that the town will be known for. My weekend would not have been anywhere near as simple, or enjoyable without these guys. Our day with Vertigo consisted of an early shuttle to the start of Blue Tier, a generous two and a half hours to enjoy the trail and a delicious local ale from the Weldborough Hotel, then a second shuttle to the Atlas trail head allowing riders to make their way into Derby at their own pace, along the lower trails of their choice.

The 8am shuttle out of Derby was packed, and the atmosphere on the bus was nothing short of electric as riders from near and far came together to sample World Trail’s newest creation. For many, it was not their first trip to Derby, having sampled the earlier works and been left wanting more. About half the bus were Tassie locals, over the moon with the ability to ride some of the best trails in the world pretty much any weekend they pleased and clearly proud of their state and it’s growing reputation. Others had travelled from the mainland. Sydney, Melbourne and even a small group of friends from Cairns who, despite feeling the cold a little more than others, were so pumped to ride they were just about shaking. Just shy of an hour of almost constant climbing that winds its way through pastures and dense forest to the summit, the shuttle is a snapshot of the modern mountain bike experience and an opportunity to connect with people from all over our country, and the world, that share a common passion. The full experience of Blue Tier is actually a very hard thing to properly put into writing. Initially all I could think to write was JUST GO NOW! QUIT YOUR JOB AND GO TO DERBY, but I had a feeling our esteemed Editor may desire something of more substance. From the first pedal stroke Blue Tier is a trail of sensory overload and undeniable craftsmanship that seamlessly blends the beauty, and rawness of the Tasmanian wilderness with seemingly impossible flow and opportunity for rider creativity. Before riding it, I had imagined Blue Tier as much like Rotorua, with it’s shaded, dark brown dirt but the reality is one of much more variety and an otherworldly connection with nature.

From its beginning, Blue Tier has clearly been designed to cater for riders of all skills sets. Multiple lines have been built into all but the tightest sections of trail or those designed more for experiencing the truly Tasmanian surroundings. Regardless of your skill set, you will love Blue Tier. Keep your wheels on the ground and rail the perfectly banked turn around the fallen tree. Use that well placed little rock as a kicker onto the next down slope that boosts your speed into the next section. Pedal hard and hit the big gap over the fallen tree. All this, on one ten metre section of trail alone! There is something for everyone, on just about any bike, and in this aspect alone Blue Tier and Derby have achieved what the majority of, at least Australian, trails lack - a true sense of inclusivity that allows everyone to ride together and share the experiences at the end of a great day. Have you ever had to stop riding your bike, I mean actually grab a big handful of brakes and cease movement this instant, because you were laughing too much to stay safely in control? This is the Blue Tier experience. Twenty kilometres of ‘how is this even possible’ flowing trail, with enough rocks, roots and other technical features to keep you properly on your toes. Each metre of the entire length leads naturally, and relatively effortlessly, into the next. This alone makes Blue Tier the best piece of trail in our country but that’s not where it ends. Now take that trail, and place it right in one of the most surreal and gorgeous wilderness areas in the world. Those flowing turns and rollers now wind their way through an ancient forest of Myrtle Beech. Smooth, paved trails follow bubbling little streams and you climb loamy switchbacks with thick green moss covering everything in a crazily Hayao Miyazaki animation kind of way. Wide open, fast trail is back dropped by views across valleys to the rugged mountains in the distance and you almost end up in a trance like state until the joy of the experience actually becomes too much and you’re just giggling like a crazy person. If there is an experience that, at least for me, defines destination mountain biking then this is probably it. Challenging trails for riders of all levels, in a part of the world that needs to be seen to be believed. So yeah, you should go to Derby. Amazing trails, an idyllic location and not that difficult to get to from most major cities. Sure, there’s a bit of work still to be done with infrastructure within the town, especially with the Enduro World Series visiting in April, but the best way to help things move forward is to get down there, ride the best trails or your life and buy some locally made food and drink. I highly recommend Little Rivers Dark Lager, made just up the road in Scottsdale.