Collie is the latest Trail Town in Western Australia, and it's well worth a visit!

By now, many of us would have heard of the term ‘trail town.’ The endearing title refers to towns and regions across the globe, where cycling facilities have boosted local economies by attracting throngs of two-wheeled tourists. The classic Australian example is Derby, where an otherwise sleepy country town in Tasmania became an unprecedented tourist attraction for mountain bikers from around the world. Bike shops and various boutique accommodation options are just a few things which have blossomed in the area due to the demand created by a vast, world-class trail network.

With all this in mind, it’s hard to imagine an economically entrenched mining town in south Western Australia becoming a cycling - let alone tourist - destination. But that’s exactly what the town of Collie is morphing into. On the surface, Collie is fairly unassuming: it’s about 2 hours south of Perth, 45 minutes from the beach, with a modest population of 9,500. The majority of these residents are miners, and Collie has roots in coal dating back to the 1880s. The geography of the surrounding national parks is undulating but doesn’t feature the typical natural elevation many associate with mountain bike parks. Collie might just be the next big thing in Australian mountain biking.

So how did the town of Collie score a $10 million grant from the state government to develop a trail network? We spoke with Rod Annear from the Western Australian DBCA (Department of Biodiversity, Conservation, and Attraction) to uncover the origins and future of their grand plan.

“Collie has a well-earned reputation as a rough town. [Like] any mining town, they often work hard and play hard,” concedes Rod. With inexpensive accommodation and five pubs, this is hardly surprising. But what is surprising, is Collie’s profound historical relationship with the sport of cycling. “Cycling in the ‘olden days’ was really a working man’s sport. It was the thing that was accessible because you didn’t really need a lot. You’d ride your bike to the mine during the week, and then you’d turn the handlebars down on the weekend and go racing.” The most coveted weekend of racing is the Collie to Donnybrook Cycling Classic, which has remained a staple on the WA road-racing calendar since 1925. An outdoor velodrome and cycling museum further attest to the town’s cherished pastime, and at one stage Collie was even manufacturing their own bikes. Today Collie remains one of the only towns in Southwest WA to maintain a “proper” bike shop, according to Rod. “[Collie] really does have cycling DNA in its veins.” 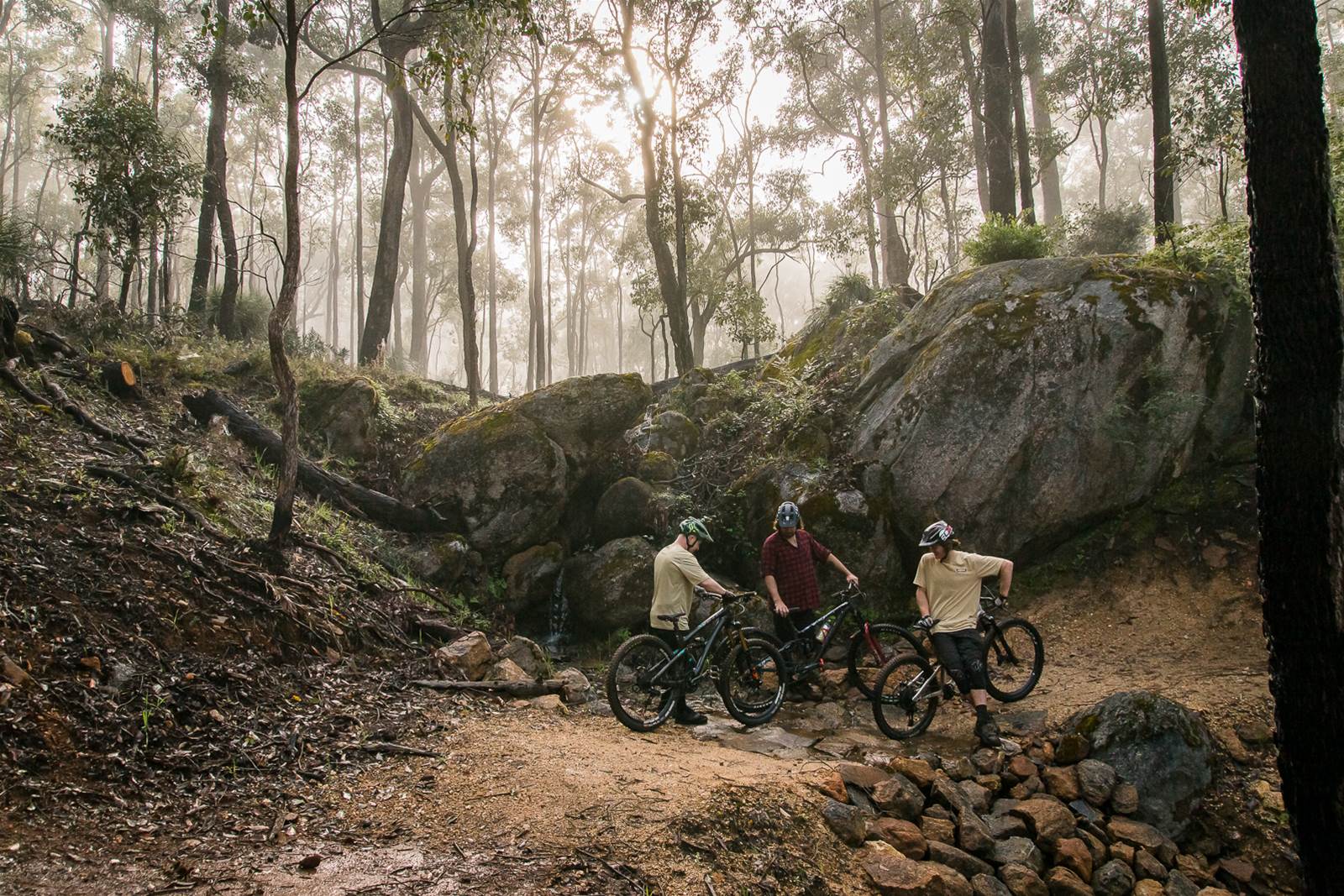 The landscapes passed through on the trails are stunning.

When you understand this rich heritage, the idea that Collie could host one of the largest trail networks in the country suddenly becomes very believable. Suffice to say, the planning and presentation process was lengthy, calculated, and tedious. The WA community had long been craving more trail networks; but the type of funding required to build a tourist-worthy attraction usually lies within the state vaults, and accessing it requires an impressive level of work and perseverance. It was 15 years ago that Parks and Wildlife (along with the Department of Sports and Recreation and others) began envisioning potential trail towns for WA.

After more WA trail content? Check out some of our other destination features below:

After listening to the guest speakers and feedback at the annual WA Trails Forum, Rod and his colleagues began the mammoth task. “We got this story… that elsewhere around Australia and around the world, that creating ‘trail towns’… could help recreate vibrant towns but on the basis of trails.” In 2012 they devised a method to create successful trail towns, based on their research from examples around the world. “We had this stack of planning as high as the roof… we had all this stuff ready to go.” Then in 2017, the strategic masterplans and presentations paid off. They were in the right time, at the right place, with the right groundwork to receive a generous grant from the newly elected government. The primary goal of this funding was to aid Collie in transitioning away from exclusive dependence on coal production. Amazing trails will provide a much needed boost to Collie's economy.

Fast forward a few years and the area has birthed a variety of trails, from a delectably smooth jumps park to an adaptive-MTB specific trail. And between now and 2023, over 60km of trails will be added to the already substantive grid of the Arklow Trail Network. By the time the project is complete, there will be 3-4 days worth of riding in the area. Currently the trails are green and blue level which conform with the gentle terrain of the Collie River Valley. This makes the area an ideal host for XC events such as the recent Collie River MTB Marathon. “There’s heaps of long distance, XC marathon type stuff,” says Rod, “that kind of Buller Epic experience, where you can ride for 65km on singletrack without going on the same track twice.” More technical and enduro-orientated tracks are also planned, catering to the exponentially growing market of long-travel bike owners. This market includes the local miners themselves, who instead of pouring their income into motorbikes or jet-skis, now splash out on high-end mountain bikes. The local miners are enjoying the incredible network.

It wouldn’t be a mountain bike destination without a smorgasbord of accommodation options. From budget pub rooms to luxury farm stays, Collie is continually expanding their tourist abodes. Like the rest of the town, the accommodation options are steeped in history and character. Collie has vast experience catering to travelers due to temporary miners and coal workers. The traditional housing for such workers was dubbed “single men’s rooms,” and were usually minimalist, self-contained units with communal kitchens. But now many of these places are being revamped and modernised while targeting outdoor enthusiasts. One particularly unique renovation is the town’s now defunct roundhouse. A roundhouse is large warehouse where steam engines used to be serviced; it’s a peculiar looking building, and Collie’s is one of the last remaining in WA. But with all the funding, motivation, and inspiration now permeating Collie, the roundhouse is being reimagined as boutique accommodation, including a café and bistro. It’s a private venture accompanied by state funding, another testament to successful planning and pitching. 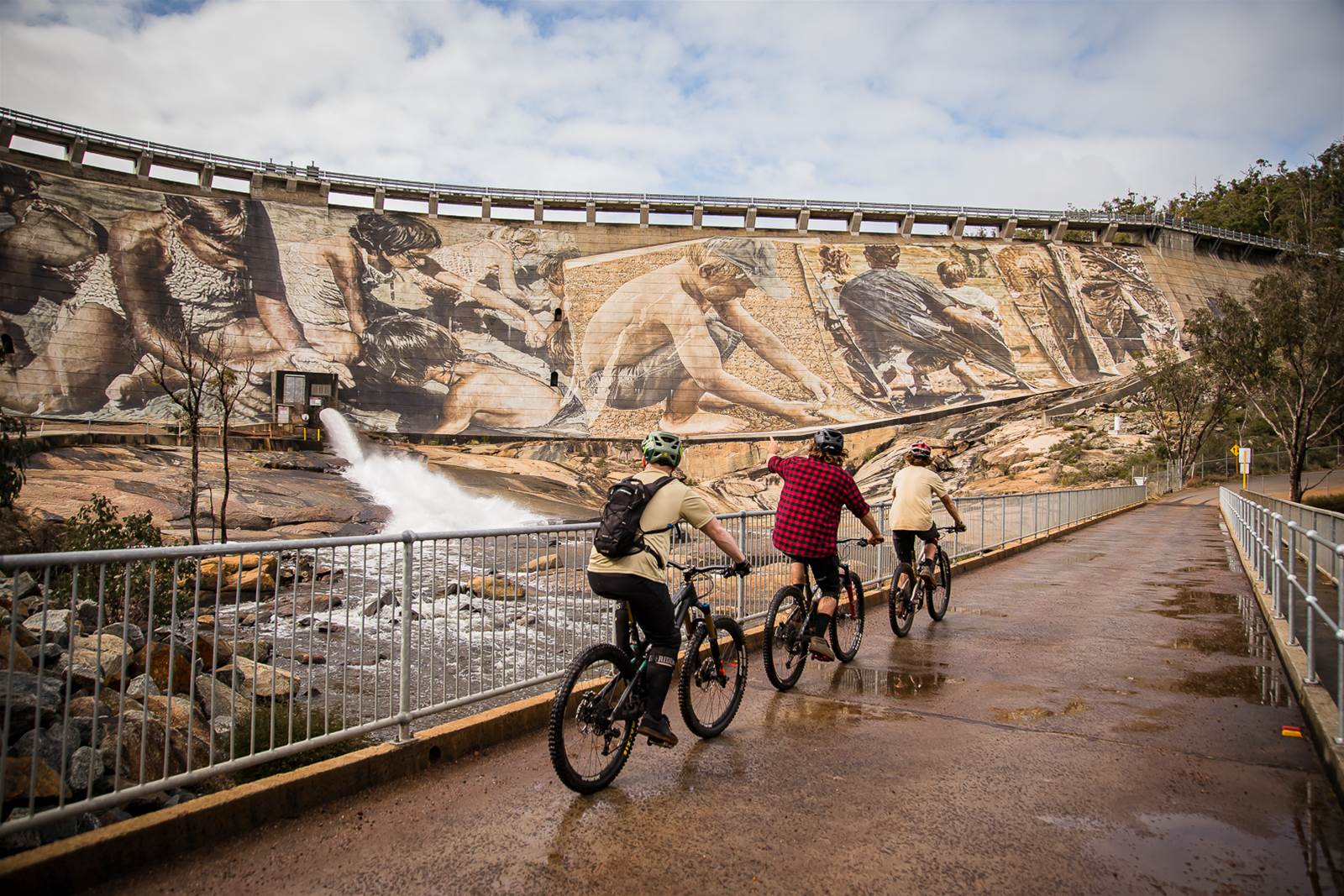 But the reinvention of Collie is more than just an economic or tourist endeavor. A more subtle yet meaningful goal is the reconnection of riders with nature. “We’re trying to link all the trails to the nature and culture of the area, so we tell a bigger story.” Emerging conservationist groups are continually discouraging trail infrastructure in a well-meaning attempt to protect natural wildlife and habitats. Sincerely addressing this concern, the stakeholders in Collie view awareness and respect for nature as an integral pillar of the trails’ existence. “The… image of mountain biking is young blokes with full-face helmets and body-armour flying through the air… and in that story the environment isn’t really important.” So in order to change this general perception, it’s essential to “connect people with place.” One means to achieve this is naming the majority of trails after the native animals and natural traits of the area. For this they’ve taken some inspiration from the Dwellingup network situated about 1.5 hours north of Collie; “Busted Nuts” is a popular black-diamond run in Dwellingup, and while its name hints at its difficulty, it’s actually a reference to the native cockatoos who ravage the redgum tree nuts. Similar references will be harnessed in the Collie network to spark interest in the wildlife and remind users of their place in nature. The branding of the entire project – the “Wambenger Trails”- also tells its own story. The wambenger is a native marsupial who’s “feisty, cheeky, fast-moving, lots of energy but not very well known,” explains Rod. “And that kind of fits Collie: it’s a bit cheeky, it’s got lots of energy, and it’s not really that well known as a tourist place.”