There are all sorts of phrases that are spoken like gospel in mountain bike circles – and we are probably guilty of spreading some of them, like a lot of other mountain bike titles. But what statements are fact, and what ones are myths?

Loiter at any trailhead long enough and you’ll hear the phrase ‘flat pedals win medals.’ It’s a catchy saying, but is there any truth to it?

While the majority of professional Enduro and Downhill riders use clipless pedals, flats have some distinct advantages. They allow you to take a foot off instantly, you can move your feet to weight the bike more precisely, and you can drop your heels further for stability and braking traction. In the last twenty years, no name has been more synonymous with flats than Sam Hill. World Cup Downhill rounds and series wins, three World Championships, and his recent three-peat of the Enduro World Series (EWS) overall demonstrate that flat pedals definitely win medals. Hill’s success is an anomaly however, particularly in the world of Enduro.

In Downhill the humble flat pedal is slightly more popular. Connor Fearon rides flats to regular top tens, Brendan Fairclough had his best season in years on flats in 2019, and who can forget Gee Atherton borrowing a local’s FiveTens to win in Cairns in 2014. Another flat pedal riding Aussie is Chris Kovarik. His 14 second victory at Fort William in 2002 is one of the biggest winning margins in Downhill World Cup history.

To summarise, flat pedals do win medals, but they’re rarer on the podium than their clipless cousins. Whilst in the post Sam Hill era we might see fewer flats on the podium, they’ll always reign supreme in the world of freeride and dirt jumping.

Lachlan Mackillop from SRAM Technical University says SRAM’s chains are ready out of the box. He says the factory lube keeps the chain’s pins and rollers lubricated, so leaving it on isn’t an issue. ‘Whilst having a dirty chain is detrimental to the drivetrain, the real killer is where debris penetrates deeper inside the chain. Personally, I run the stock lube until the chain is noisy or dirty, then I clean the chain really well and apply a wax-based lube such as Smoove.’

Dave Rome from CyclingTips has dived deeper into chains than just about anybody, and he recommends stripping the chain from the get-go.

‘The lube SRAM uses is incredibly sticky and saps a fair bit of energy, not to mention how dirty it gets. Shimano’s factory lubricant has gotten better recently, but I’ll still degrease their chains for mountain bike use.’

Dave’s recommendation for an efficient drivetrain without too much effort is to apply a wax-based lube.

‘A Smoove or Squirt won’t adhere to the factory grease if it’s applied to a chain that hasn’t been thoroughly degreased. You want to degrease the chain as much as possible prior to applying wax-based lubes.’

Whilst we’ve found that a wax-based lube applied to a stripped chain is often a cleaner and more efficient option, it isn’t the end of the world if you whack a new chain on your bike and go riding. Sometimes you can’t wait to get out there! 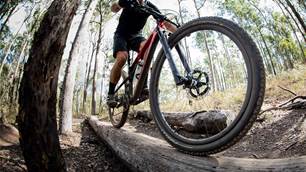