Mountain bike suspension has never been as good as it is right now.

Mountain bike suspension has never been as good as it is right now. Forks and shocks are lighter, smoother and more adjustable than ever, and it’s now possible to pummel our trail bikes down the kind of rooted, black diamond runs that were reserved for bikes with dual-crown forks only just a few years ago.

In the interest of science, I decided to carry out some back-to-back testing on our Avanti Torrent CS long-term test bike to find out just how much of a difference this little damper can actually make. 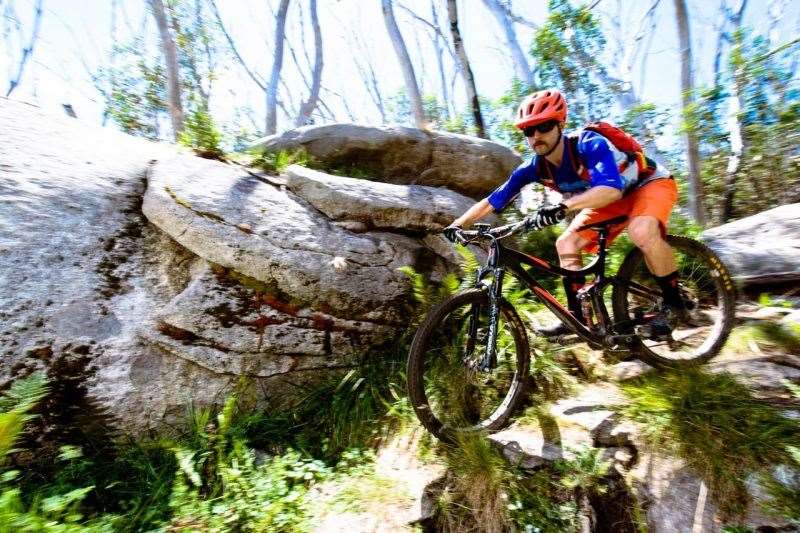 The shock we have on test is the FLOAT DPS Factory Series shock, which means it features heaps of adjustability and a super-slick Kashima coating. Our test shock also came equipped with the optional EVOL air can, which is available on new FLOAT shocks from 7.5x2.0” and up.

Standing for “Extra Volume”, the EVOL air can was developed to offer a more linear spring curve, with smoother performance and additional mid-stroke support being the main goals. Not unlike the RockShox Debonnair design, the EVOL air can creates a longer negative spring to emulate the feel of a coil spring.

Compared to the 2015 FLOAT CTD shock that came stock on the Torrent CS frame set, the EVOL can added about 32 grams, with the 2016 FLOAT DPS shock coming in at a confirmed 299 grams.

The new EVOL can requires about 10-20% more air pressure than a regular FLOAT shock. In the previous FLOAT CTD, I was running 150psi to achieve 30% sag for the Torrent’s 150mm of travel. After much experimentation with the new FLOAT DPS shock, I eventually settled on 180psi. At this pressure, I was actually running a little less sag, despite being able to enjoy a smoother feel to the rear suspension. The benefits for the Torrent was more pedal clearance, added traction, and a greater ability to mute the high-speed chatter that would normally be fed back through the contact points.

Having been widely used across the Fox product line since 2013, the CTD naming system is gone in 2016. Replaced by FIT4 in the forks and by DPS in the shocks, you’ll no longer find the “Climb, Trail & Descend” settings. Fundamentally, the FLOAT DPS shock still offers 3 compression settings, but they’re now named Open, Medium and Firm instead. Underneath that blue lever however, there’s more than just a name change. 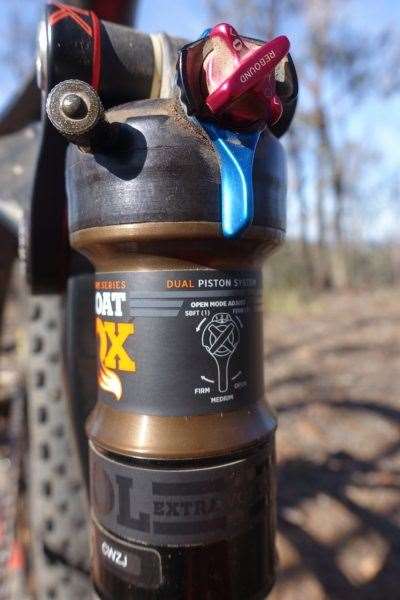 The Firm setting is really still just for smooth bitumen surfaces. There’s a blowoff threshold built in, but it’s nothing like Trek’s RE:aktiv or Specialized’s Brain. The shock’s Medium setting is a much more useful pedalling aid for tackling proper singletrack climbs, and aggressive riders will also appreciate the increased compression damping for boosting off of lips and jumps on the trail.

That said, I’m typically a fan of running my suspension wide open. And so after finding my ideal spring pressure, I largely left the shock in the Open mode whenever the tyres touched dirt. In this setting, the new DPS damper offers greater oil flow compared to the CTD damper. The result is a more active stroke and more composure when your bike is being pummelled with repeated high-speed hits. I also found the FLOAT DPS shock to be a little cooler to the touch at the end of long downhill runs. Whether it’s the larger can or the damper at work here, there is no doubt that the FLOAT DPS is a better shock for technical riding.

The new FLOAT DPS shock pushes the performance bar to a whole new level. Both the EVOL air can and the DPS damper can be credited equally here. The EVOL can offers a suppler coil-like spring rate, which is perfectly suited to today’s long-travel trail bikes. With increased sensitivity from the DPS damper, the FLOAT DPS shock provides a livelier damping feel that helps to establish a more consistent connection between tyre and trail.

For less than $700, the FLOAT DPS could be the upgrade your trail bike is looking for.