If you think the Snowy Mountains region of NSW is growing in popularity with us mountain bikers, you’d be right.

If you think the Snowy Mountains region of NSW is growing in popularity with us mountain bikers, you’d be right.

As of the end of last season, there was a significant increase in visitor numbers and over $10 million being invested into new infrastructure and facilities with the majority of projects underway located around Thredbo Alpine Village, Lake Crackenback Resort and the town of Jindabyne.

Thredbo already boasts Australia’s longest lift-accessed downhill mountain biking runs, and is reporting that mountain biking visitor numbers have doubled in the last year alone. $4 million has been invested in trail development in that area alone, which will increase accessibility for riders of all ages and skill levels – it is

tipped to be completed by the end of this coming summer.

linking Thredbo Alpine Village to Lake Crackenback Resort & Spa. It is slated for completion by December 2014. Multiuse trails are also under construction in the Geehi Flats and Tom Groggin areas. With recent trail openings, the foreshore of Lake Jindabyne now contains over 10km of trails. There are longer-term plans to link Jindabyne with Crackenback and Thredbo and a visionary project to create a 70km loop that takes in a lap of Lake Jindabyne.

Check out the extensive trail network on the Snowies website at snowymountains.com.au. 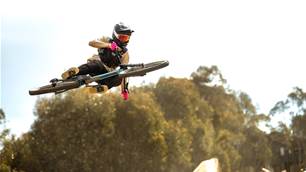 Get pumped for the Cannonball MTB Festival!