Shimano just revealed two new group sets, using what they have dubbed Linkglide. It's an evolution of Hyperglide, with the aim of greater durability and shifting performance especially under high loads. So yes, that means these two group sets are aimed squarely at eMTBs.

Shimano's 12-speed group sets use Hyperglide Plus, which creates very fast and smooth shifts, even under load. The Linkglide parts are available in the M8130 11-speed versions and M5130 10-speed. That puts them as Deore XT and Deore options respectively.

The big change is the cassette, specifically the shape of the teeth. Shimano were aiming for a big increase in durability, and this came down to reducing what they call pedal shock. This is the amount the chain moves or reverberates after a loaded up or down shift. Throw in the extra power of an eMTB system and you'll know the sound and feeling. Shimano achieve this with new tooth profiles for the Linkglide cassettes. The teeth are far wider at the base, and the leading and trailing edges of the teeth are designed for a smoother engagement and release. Shimano also modified the shift gate, which is the sculpting on the cassettes to assist the shift. The new tooth shape helps create less deflection when moving to a higher, or lower gear. And while Shimano aimed for a 300% improvement in durability, the cassettes are lasting about 5 times longer. The new derailleur cages are super short, and the Deore XT ($189) level derailleur has an externally adjustable clutch, while the Deore ($114) model will need to be adjusted internally if you want to fine tune it. The cassette and derailleur are compatible with Shimano's 11-speed chains, but a new, cheaper LG500 chain is also available, selling for $45. There are new shifters as well, with iSpec EV and bar clamp models in Deore XT (from $115) and a bar clamp model for Deore ($63). These have the same instant release and 2-way release you would be familiar with from any Rapidfire Plus shifter. The Linkglide parts are unlikely to be getting built onto the latest and greatest eMTBs as they roll out of your local bike shop. But you will see a lot of this product on new bikes in the eMTB mid-range. The overall gear range is a little tighter than a top 12-speed group set, but given the extra assistance on tap from an eMTB, the gains in durability and ground clearance from the derailleurs should be a huge bonus. With plenty of high performance 11-speed eMTBs already on the trails, there's likely to be a shift (pun intended) to the M8130 equipment for those riders as they replace parts. The claimed increase in durability and shift security underload will likely be received well, and if that cassette life increase is true, the upgrade cost would repay itself pretty quickly in vastly reduced wear. We'll aim to get some trail time on some of the Linkglide parts soon to see how they shift and hold up for some extended riding out on the eeebs. 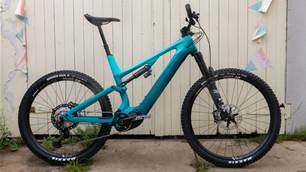