The ever-popular Rocky Trail team took the Fox Superflow sealed by Stans racing to Atherton, in Tropical North Queensland on the weekend.

Atherton Mountain Bike Park is no stranger to riders with plates on the handlebars. The trail network high in the cloud mountains on the Atherton Tablelands have hosted countless events, including the Crocodile Trophy and 2013 National XCM Championships. But it's the steep descents that are a drawcard, and it makes the location perfect for enduro racing.

The park hosted its first Fox Superflow sealed by Stan’s gravity race on the weekend. The local motocross gun and Enduro World Series (EWS) racer Caleb Ward took out the outright male win with the fastest time across the whole weekend with 20:01.2 among a strong field of competitors. The female win went to Townsville racer Kristy Kerrisk in 24:49.1.

The organisers from Rocky Trail Entertainment felt warmly welcomed by the local community. Rocky Trail’s owners Juliane and Martin Wisata have had a long-standing history in the region of over a decade as race committee members with the Crocodile Trophy, which is scheduled to return with its 26th edition in October this year. For the Atherton Fox Superflow, however, they had delegated the reigns for the event to their experienced Event Team with Jo Parker and Bob Morris managing the race. Ahead of the event, Martin Wisata said that the Atherton trails had been specifically picked for the QLD North Series of the Fox Superflow.

“We have always loved this region and the Tablelands community, we can’t wait to return with the colourful Croc peloton. We are so proud that finally our very own Rocky Trail racers have hit these tracks in Atherton! The trail network is simply superb and we have been so impressed with the local MTB community’s engagement – all visiting racers have been commenting on the quality of the trails, which we have been exploring and seen grow so well over the years. Based on that experience, we knew that our gravity concept would fit really well”, said 10-time Croc finisher Martin Wisata.

The Fox Superflow offered three timed race tracks with neutral transitions to the starts. It's a friendly take on enduro racing, and one that mixes social and competitive mountain biking into one day out. Over one third of the competitors in Atherton were under 17 years old with local Matt Walker placing in the outright top ten as the fastest junior and taking the win in the 15-17 year old division with a race time of 21:59.8. Tyler Gauci from Tinaroo came in second ahead of Ethan Sampson from Townsville. The locals truly were out in force with Elite racer Caleb Ward from Ravenshoe taking the outright win with the fastest time on the three race tracks, clocking in 20:01.2. “The timed runs at Atherton were some of the longest ones we’ve been able to knit up across the East Coast of Australia,” said Race Director Bob Morris who designed a cracker of a race track for the Atherton Fox Superflow. “We have already been scouting more trails with the local riders, there is so much potential here for more”, he added.

With a gap of about six seconds,Toby Greenwood from Atherton came in second in the Elites and Adrian Dawson from Yungaburra came in third with 20:35.4. In fourth was Cairns racer Nathan Sandford with 20:55.8 and Ethan Weiss from Mackay placed in fifth, extending his lead in the Fox Superflow QLD North Series tally. Weiss had taken the win in the Mackay Fox Superflow 2 weeks ago, which he backed up with an U17 victory at the UCI Nationals on his home trails at Rowallan Park. He said that he planned to complete all three QLD North events in 2021. 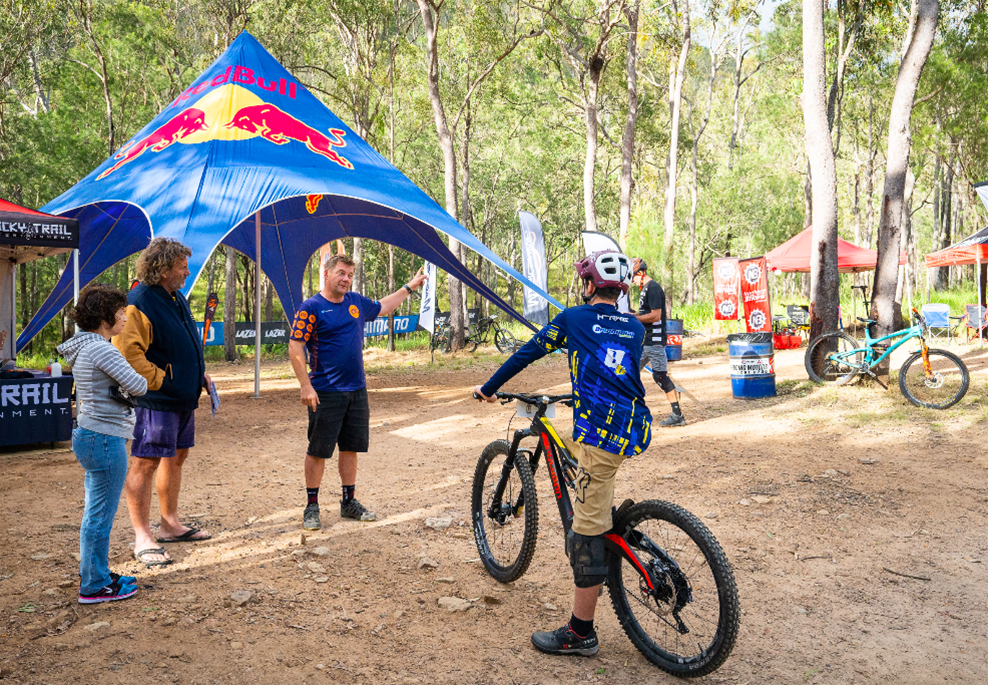 With Atherton hosting the second of three QLD North events, the series will conclude in Townsville at the end of the month. A large contingent had travelled up from Townsville with Kristy Kerrisk taking the female outright win in 24:49.1 in the 15% female field of racers. Local former Australian National XC Champion Emma Colson took out the overall second position with 26:34.5 ahead of Cooktown’s Amy Meyer in 27:46.0. Celeste Petersen from Mareeba clocked in the fastest female eBike time with 25:43.0. In the category that had been growing in popularity, Nick Kosanovic was the fastest male eBiker with 23:31.3.

The Fox Superflow QLD North Series will conclude in Townsville on 26+27 June with the QLD South Series starting in July with events scheduled for Nerang on the Gold Coast, Ipswich and Mt Joyce. For more information, please visit www.rockytrailentertainment.com