Microshift built on the popularity of Advent 1x9 with a higher tier Advent X 1x10 offering.

When we tested the Microshift Advent 1x9 drive train last year there was a fair bit ofn curiousity about whether a 9-speed mountain bike group set with only a 42t low gear would be popular. That was until we rode it.

In the workstand and on the trail the simple but well-executed drive train really impressed. Sure the range was lacking, but the value and performance was incredible.

Microshift haven't rested on their laurels, and just released a higher-tier offering with 10 speed - the Advent X 1x10 drive train. It's essentially added a 48t sprocket to the 11-42 range, but at the same time Microshift have overhauled the cassette construction and made an improved shifter as well. The cassette not only jumps up to an 11-48 range, but it drops weight as well, now weighing a confirmed 415g, compared to 529g on their 11-42 9-speed cassette. This is thanks to a carrier system, like what many higher end cassettes use, with steel rings mounted to an alloy carrier. Or two sets of that in this case, with the smaller sprockets being single steel items. The Advent X cassette still mounts on an HG splined free hub, which is a boon for upgrading to a wider gear range, as there are countless high end wheels and hubs out there with this freehub standard, and this maeans Advent X 1x10 is a wide-range 1x option for someone with an older high end bike. Even if you can upgrade your freehub to a XD driver or Microspline freehub body, this saves at least $100 on doing that, and as a plus you'll still be looking at an overall cheaper upgrade, just without a 10-51 Shimano option or 10-50 SRAM option. Of course you can get 12sp SRAM NX Eagle 11-50, but it's quite a lot heavier. 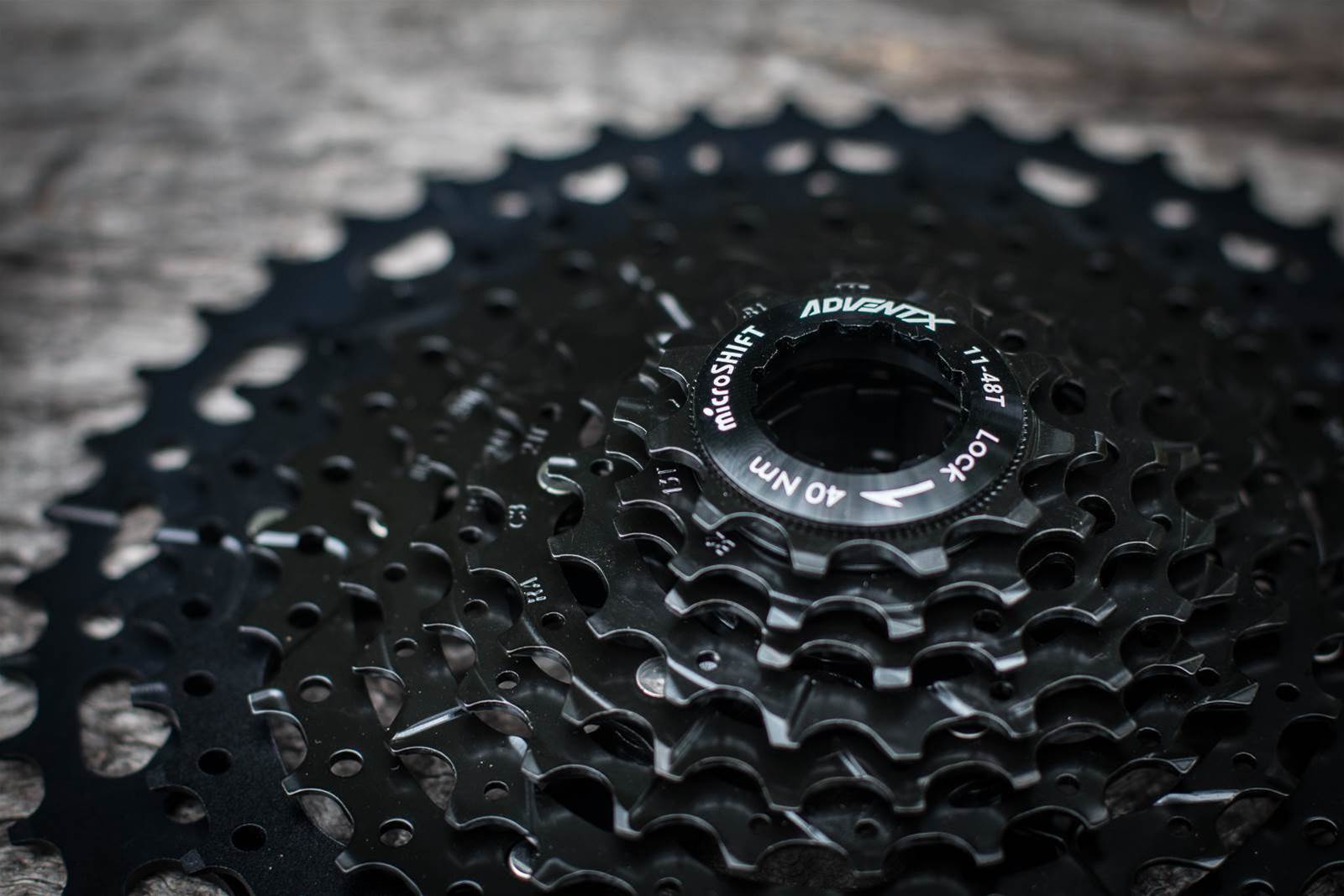 The Microshift shifter has had quite an upgrade, and with a rubber pad on the trigger it has an excellent feel on the bars. There's np split clamp or matchmaker style option, but the shift feels really precise. You can push through to an easier gear a few clicks at a time, and click up to a higher gear one at a time. It weighs 134g with the cable, 3g more than the 9-speed Advent model but with way better feel. It is a push-push shifter, so if you're used to a forefinger release like Shimano offers - that's not available here. You can't adjust the position on the mount itself, but the triggers fall to hand quite easily. You might be limited for mounting options with some brake levers, but on our new Norco Optic C3 long term test bike they nestled in with the Shimano lever just fine. The rear derailler has seen work as well, and like the cassette and shifter for Advent X, it drops weight for the Advent X group. This derailleur weighs 322g compared to 384g for the 9-speed model. There is some more hollowing out and shaping of the whole unit, and a move to a larger lower jockey wheel. The clutch remains the same, and is easily toggled on or off to aid with wheel removal and fitting. Just like on Advent 1x9, the clutch works like a hub ratchet and not like a sleeve tightening around a spring. It's adjustable, which on any clutched derailleur is the magic ticket to getting your shifting to suit you, your bike and your riding.

The limit screws and B-tension adjustment are all easy to get to, as is the cable clamp.

This is where Advent, and now Advent X, really shine. As the system has less gears in there, it's far less susceptible to less than precise setup. While SRAM have their B-tension tool for Eagle, and Shimano have a B-tension guide on the back of their 12-speed derailleurs - this just runs easily, with a basic cable tension and B-tension adjustment it works fine. Spend the time to make sure you run proper clearance for the B-tension with the right chain length and it's even better. The shifter comes with a nice cable and I slung it through the stock outer on the Norco Optic. As the optic C3 has a SRAM NX Eagle group as stock, the cassette fitted up easily on the HG-spline freehub - after a little work on the Novatec hub which was super rough out of the box! Clearly someone was too enthusastic at the Novatec factory.

The Norco Optic C3 has SRAM NX cranks with an Eagle chain ring, and I wrapped a fresh Shimano 11-speed chain around it all.

The 10-speed cassette, 11-speed chain and 12-speed chainring all get along fine. Shifting is smooth, without the distinct short action of something like a top end Shimano 12-speed group set, or the clinical precision of an electronic group. But here's the thing, the shifter, derailleur and cassette sell for $299. That's crazy good value for a wide range 1x group set to either build a bike or upgrade something older.

The range itself is good, essentially adding that extra step from the 1x9 Advent. So far my only complaint is that the Norco Optic has a 30t chain ring, which is a little small for my local riding. But given I often get around on an older Shimano 11-46 setup - I really rate it so far.

With the Microshift Advent X 1x10 drive train fitted up to a new long term test bike it's time to put more trail kilometres on it, with more shifts. The tactile response, finishing and weight are all a step above the previous Advent 1x9 group, and I'm super positive about Advent X 1x10 so far.