Riding eMTBs is so hot right now, and pedal assist bikes can be the gateway drug that get some riders into mountain biking. Right now at the Mountain Bike World Championships in Val di Sole. , Italy, eMTBs are about fun and racing. The third edition of the eMTB World Championships held on Friday 27 August offered hours of fun to a big audience in Daolasa.

This time, the World Champion jerseys brought more fight to races, and France and Switzerland managed to increase their medal tally at the 2021 MTB World Championships: the new World Champions are Frenchman Jerome Gilloux and Swiss Nicole Goeldi, the youngest athlete competing in the race. Also making the news was American Christopher Blevins, arguably the man of this edition of the World Champs so far. After the silver medal in the Team Relay and the gold in the Short Track, the 23-year-old from Durango added the only medal he was missing in the eMTB race: nobody had ever achieved such feat in the same edition of the MTB World Championships. Together with his teammate, Hugo Pigeon, Gilloux destroyed the competition by maintaining a sustained and constant pace on the technical loop of 2.25km (140m elevation gain) per lap. Gilloux and Pigeon cut the finish line respectively in first and second position (+0.22), with American Blevins (+1.11) rounding out the podium thanks to a late comeback, taking an incredible third medal in three days.

“It was a really hard race,” told the Frenchman. “The course was really technical, with steep slopes and tough downhills, and a very fast early stretch. My tactic for today? I attacked on the first ascent and never looked back. After two silvers, gold is finally here.” 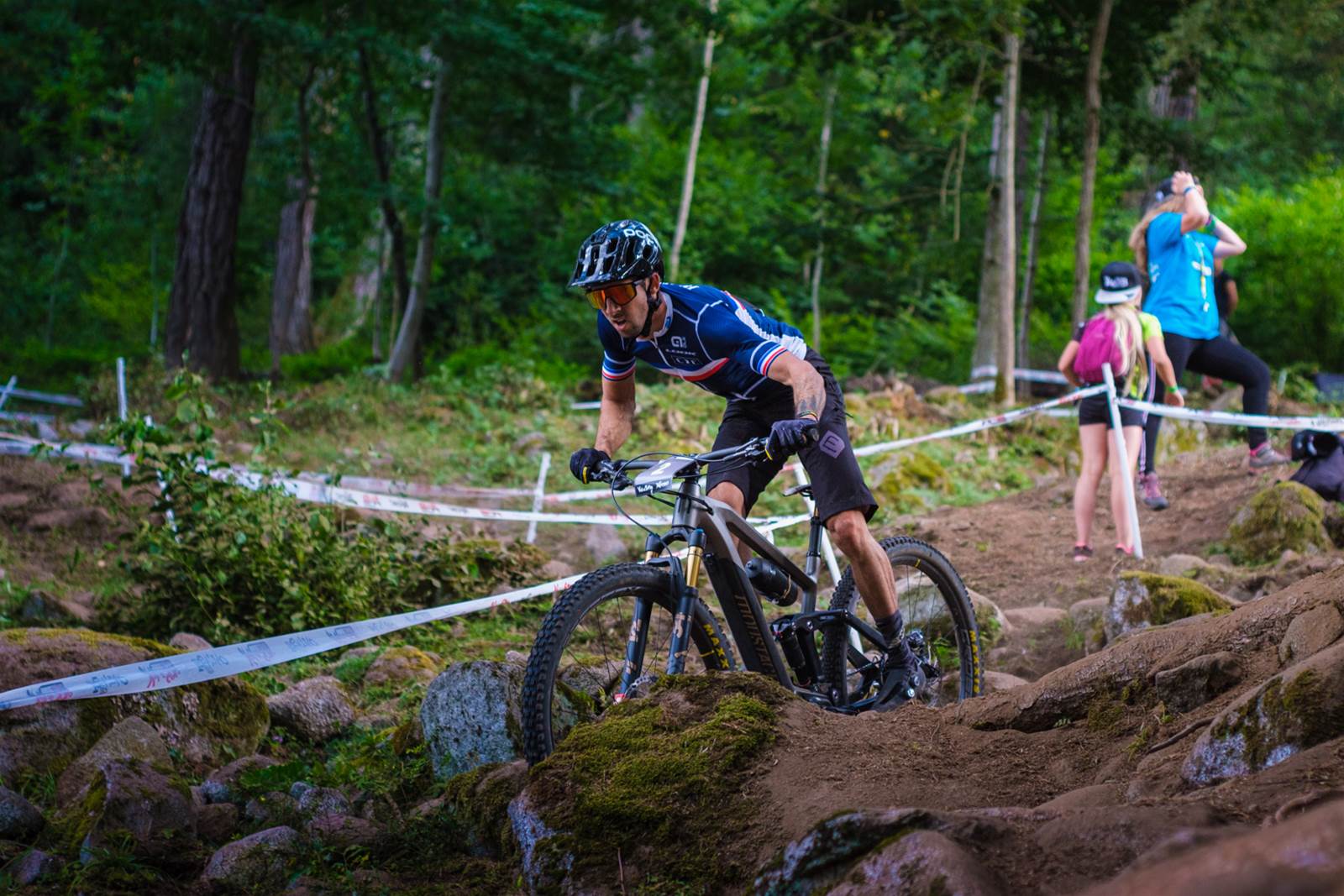 Eighth was the first of the Azzurri, Andrea Garibbo, followed in ninth by two-time Olympic Champion Julien Absalon (France), whose race was affected by a rear starting position. “I decided to participate in this race two weeks ago. It was actually my second e-MTB race ever, but I will do many more from now, as I had so much fun. The opportunity to take another medal obviously was an additional motivation, and I am living an incredible week. I might even dedicate a song to this…” told Blevins, referring to his other great passion.

Josh Carlson finished 11th, after going a bit hard in the early laps to maintain a good position. GOELDI STRONGER THAN ANYTHING AMONG WOMEN

Shortly before the men's race, the women competed for the eMTB World medals. Nicole Goeldi secured the rainbow jersey in impressive fashion, beating France’s Laura Charles, second at 13 seconds after cutting down the gap in the last lap. Bronze medal to German Sofia Wiedenroth. The defending champion, Melanie Pugin (France) could not go beyond fifth, ahead of Kathrin Stirnemann (Switzerland). “Actually, I have surprised myself,” told Nicole Goeldi. “I was a little back at the start, so I had to chase, and even in the finale, when I was in the lead, the assistance turned off in the top part of the course. I was afraid I would lose everything, fortunately, I have managed to hold on until the finish.” This is the biggest win for Goeldi, and it may well be a run of form for the young Swiss, who has to compete in a very deep field just at home.

Laura Charles (France) who was second normally races Enduro, but was attracted to the event after doing another eMTB race recently, according to our photographer Piper Albrecht.

Piper also reported that a number of riders had electronic mishaps during the race, with some of them having to turn the bikes off and on again to restart them.