A four day tropical holiday/race/adventure? Experience the 2019 Reef to Reef!

Four days of beautiful 25-degree days, sunshine, fat tyres, rainforest, and trails; bookended by days on the beach seems like a dream. Even mores when you add in no work, no responsibilities and no parenting: surely this is too good to be true? But when my trusty team mate for good times, Briony Mattocks, asked me if I wanted to have a holiday-come-bike race in tropical paradise to escape Brisbane’s crippling winter, my ‘yes’ was faster than the Mick Hannah racing down his Cairns home track.

Reef to Reef promises racing and relaxation. Beaches bookended the race, with good old country Queensland in the middle, and there were many all-important social events at the luxuriant Hemingways Brewery. Beach, bikes and beer really made this a excellent ‘winter killer’ event for anyone who needs a little tropical spice in their life. Stage one of Reef to Reef is almost a prologue. A mere 17km, surely you think it would be a quick 50min stage done and dusted. But the snaking red trails of Smithfield can be a savage beast. Heading out along part of the 2017 XCO World Championships course, twisted through the Smithfield trails before turning into the famous Jacobs Ladder descent. While the notorious A-line was bunted off to minimise first-day clavicle fractures, the rocky descent was enough to see many riders come unstuck.

Thankfully our own experience didn’t see us ejected, however Briony did get a puncture. Brothers and larrikins Neil and Paul Van Der Ploeg experienced a similar fate racing the men's pairs, Neil flatted after a blistering start, failing to catch the ridiculously swift team Giant-Shimano (Johnny Odams and Brendan Johnston), and they rim bashed through the rocks and red dirt of Smithfield. If this hadn’t happened would they have had what it took to take on the powerhouses of Odams and Johnston at this years' Reef to Reef? An early rise and shine saw us zooming up the range towards Davies Creek, the 51km loop is known for its mix of short, sharp hills and loose singletrack. The dry, loose rocky trails littered with leaves that are curled by heat and crunch under the tyres were a world apart from the clay, red dirt, lush ferns and climbing figs of Smithfield the day prior. 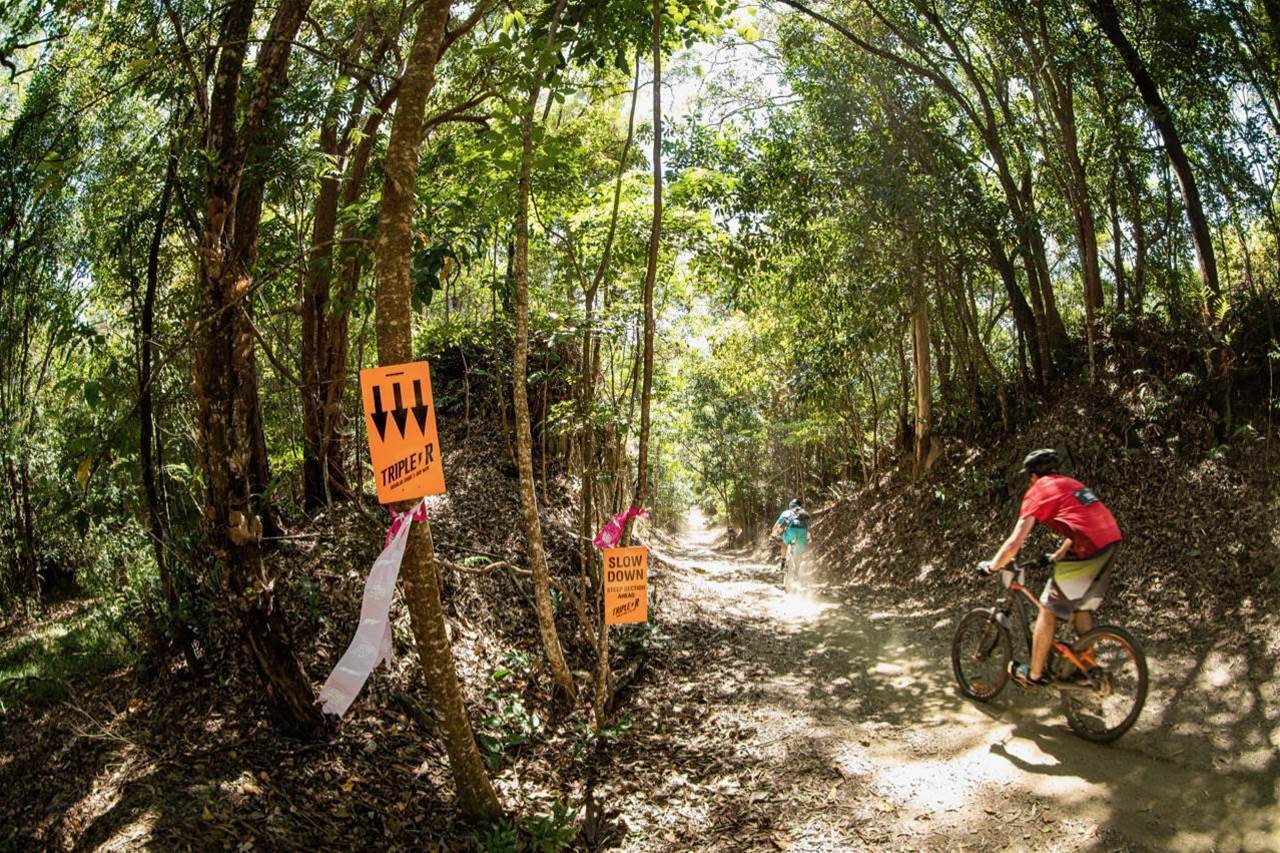 The start of the stage was announced by hitting a keg with a mallet—in true Tropical North Queensland form—as we headed out around a start loop to a fireroad and a series of short climbs punctuated with loose descents. It was at this point where we realised that acclimatisation had taken its toll on the southerner, Briony, who was reeling with the ill-effects of riding in a pleasant 28-degrees off the back of Sydney’s 4-degree morning starts. “I am dead!” she cried. There were not many other words spoken through the stage.

The singletrack was worth the hustle and agony of dead legs; The rocky trail ‘Balboa’ (boom-tish) and McGraiths Maze were real highlights. But the multiple rocky climbs zapped the legs and the lungs on such a hot day, but thankfully riders were also treated to multiple creek crossings. Those marshalling the crossings said that a few people had a mid-race swim!

Stage three was the queen stage of Reef to Reef, starting and finishing from the quaint town of Mt Molloy, a short drive up the range from luscious Port Douglas. The 68km course was the longest of the week, and riders were looking weary after two days of racing in the legs.

The race started innocently enough, with a pleasant rollout to the road. An almost road-race like start saw the big guns sit on the front and pull turns while we hid in the bunch. It all blew apart on the double track 14km in, as we turned into a gnarly, rutted doubletrack, littered with invisible holes and extra spicy with the slippery mud from rain the week prior. We rode past carnage as riders bombed into the invisible holes, never making it out: Wade from the CyclingTips mens team performed some bicycle gymnastics. Sadly as a gymnast he is a great cyclist, as he didn’t stick the landing and busted his AC-joint. Soon, the deep jungle greeted us, punctuated by a variety of water crossings: the theme of the week. Can we make it through? We’re not sure! Give it a go and hope for the best. Sometimes it’s just a foot of water, other times up to the thighs.

A new 10km of rough rainforest double track was lovely, in a masochistic kind of way. At this point I thought “probably not the best time to take a drink, the rough rainforest floor is stacked with rocks and sticks and i’ll probably put a stick through my wheel and….” BAM. I was on the ground, simultaneously warning myself about the perils of the rainforest while actually having a drink. Not to worry, ten seconds and we were on the charge again, wounded buffalo noises punctuating the air. Shortly after I realised I had lost my glasses, then…

“AGGGGHHH”. I was suddenly halted by a sneaky vine that had wrapped itself around my drivetrain. They warned us about the Wait-o-while, the sneaky vines that will take you out when you least expect it. The whole cassette was throned with the plants, it took a few minutes to get it all out; this jungle is savage and takes no prisoners!

We headed out onto some sandy rocky doubletrack, and were sent up a hill of quite rude incline.

We caught up to Em and Karl of Shimano Pushy’s-Cannondale, and in true stage race form, we were pretty spent.

“Hi guys!” I said with excitement. Karl looks back to see us, then accelerates away again; very antisocial behaviour, we told them after that this behaviour has a penalty of one pint each, payable at the Mt Molloy pub. Weary bodies were strewn around the finish area, lounging on hay bales under the event umbrellas, with faces of fatigue stuffing down beers, coffee, and burgers. Oh, how to back up for day four? Even the event massage crew had to call in reinforcements!

The trick? Beer and the fish of the day at Hemingways, Port Douglas.

In the men's open, it was a glorious day for The Van Der Ploeg Brothers, snatching the stage win from the indomitable Giant-Shimano boys in a sprint finish.

In the witching hour of morning, weary bodies were mingling at the Port Douglas Surf Club. Racers met under the cover of the morning darkness to load bikes onto trucks and bus up the range to start the fourth stage.

By day four everyone is weary. Thank goodness for the coffee.

A social start saw us head out the same way along the dirt roads as stage 3, with a nice little bunch having formed. Unfortunately, race leaders Giant-Shimano decided they wanted some alone time, and promptly rode off the front.

Of course we had no idea this was happening, as we dragged off the back of the fast bunch, got back on, dragged off, back on. But despite this we were thankful that Jacob Langham hung out with us. Langham's partner, Izzy Flint, succumbed to a vague illness after stage 2, and he was now riding solo. A good tactic for all involved, as we hummed around the stage able to talk to someone other than ourselves.

We rode along cane fields, through mucky water, and up some loose fire road littered with loose baby head rocks. We headed back up the hill of quite rude incline from yesterday in reverse, and down some exceptional sandy, rocky double-track stairs. There were squeals and yee-has: we were approaching the highly anticipated Bump Track.

No riders in front, and none behind, we whipped and hollered down the rainforest lined bump, and as soon as it began it was all over: we had hit the outskirts of Port Douglas. A few more cane properties, some footpath and dubious crocodile-crossings in the backroads, and we snaked onto beautiful Four Mile Beach. The sun was high and our hearts soared as we found a group of six or so to drive it along the beach. The wind was at our backs, we didn’t run over many children building sand castles: morale was at an all time high.

“How good is this” we all squeaked, elated as we hummed along the beach in a bunch with some of the other teams, hauling along with the joys of a tailwind.

The Giant-Shimano boys couldn’t be bested, and took the win in the men’s pairs, while the Harris Siblings took out the mixed pairs and this Briony and I won the women's.

This race has perhaps the best finish line in the world: the pristine beach of Port Douglas. We exchanged some celebratory hugs and had a quick dip before heading back to the surf club for some well-earned beers, and sharing tales of the highs and lows that can only come from the shared experience that a stage race with a few hundred of my new best friends can deliver. There is a certain feeling that comes from getting through a stage race, and an even better one when you can share it with a partner. Sure, I dangled gels in front of Bri on day two, and she put up with my myriad of rider errors on day three, but in the end you come out stronger and knowing more about your strengths and weaknesses. And who can say no to a four day holiday-uh…I mean race, in beautiful Tropical North Queensland?

Head to the Reef to Reef site to learn more about the race and the 2020 edition coming up between 06-09 August! Getting down with the dirt