The final round of the UCI World Cup at Snowshoe had the overall titles for Downhill come down to the wire.

In the women's downhill, Hannah entered West Virginia with a narrow lead over Marine Cabirou and needed a sixth-place finish to secure the overall title. Downhill heavyweights Tahnée Seagrave and Myriam Nicole reemerged from injury adding to the title pressure.

Seagrave had crashed in the previous days qualifying session and started further down the order only to ride herself straight into the hot seat. Both Myriam Nicole and Veronika Widmann managed to best that time and the stage was set for the two title protagonists. Cabirou had a flawless run, riding gaps and lines which none of the other riders even attempted, taking the lead with a time of 03:43:032.

Hannah comfortably slotted into fifth place, and after years of battling taking her overall crown by one position. Cabirou secured a third straight UCI World Cup win to end a season which has seen her establish herself right at the forefront of international downhill racing.

"It's super hard having someone has fast as Marine being able to have a little less pressure than me." Hannah said. "I have to hold back from what I want to ride knowing that I have to think about the bigger picture. I know if I was in her position I would have a lot of fun racing and going for it. I just learned so much about mental and preparing for races and accepting not being able to win every race you go in. It's been pretty hard. No wonder not many people win the overall because it's pretty hard."

In the men's downhill, Loic Bruni, the newly-crowned World Champ, faced the defending overall titleholder, Amaury Pierron. In a race which had previously been about tenths of a second, Pierron crossed the line with a clear five-second lead.

Bruni played it safe slotting him third place, the minimum requirement for him to take the overall, unless Pierron scored maximum points. Danny Hart took to the track with blistering fast run crossing the line with a time 0.656 seconds faster than Pierron’s with a time of 3:03:627, denying the Frenchman of maximum points handing the title to the now fourth-placed Bruni, with the American Charlie Harrison, third.

"Winning here is I think the last thing, the only thing I wanted so bad after the World's, it was like a life goal, it's so good and I can't believe it," Bruni said once he had won the overall. 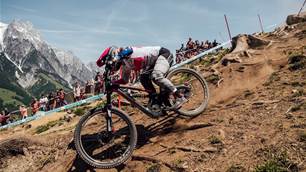 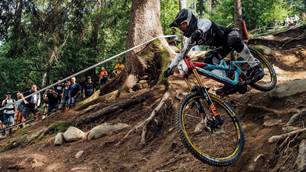