TAG Metals are a moto brand making their way into mountain biking. Will Shaw takes a look at their cockpit offerings.

TAG Metals might be a company you’ve never heard of, but if you’re into dirt bikes then that’s unlikely. Established in 1999 and currently sponsoring big names like Travis Pastrana and Ryan Villopoto, TAG has a fantastic reputation in the throttle twisting world. Similar to Renthal, who also started in moto, TAG is making the jump into mountain bike componentry with over 20 years of manufacturing experience. They’re not mucking around either, as they’ve already picked up 10-time world champion Nico Vouilloz, as well as the rest of the Lapierre enduro team.

I was sent a full cockpit setup by the Australian distributors of TAG, Echelon Sports, and I was keen to put their initial offerings to the test. For testing, I mounted the cockpit to my 170mm enduro bike. First up from TAG is their T1 Aluminium Stem. The stem is made from CNC machined T6 alloy and uses a classic 4 bolt clamp to keep your handlebars where they’re supposed to be. Something that TAG are introducing with all of their cockpit components is their Speed Align System (SAS). The SAS is a number of markings on their stems, handlebars, and grips to make aligning your cockpit that much easier. 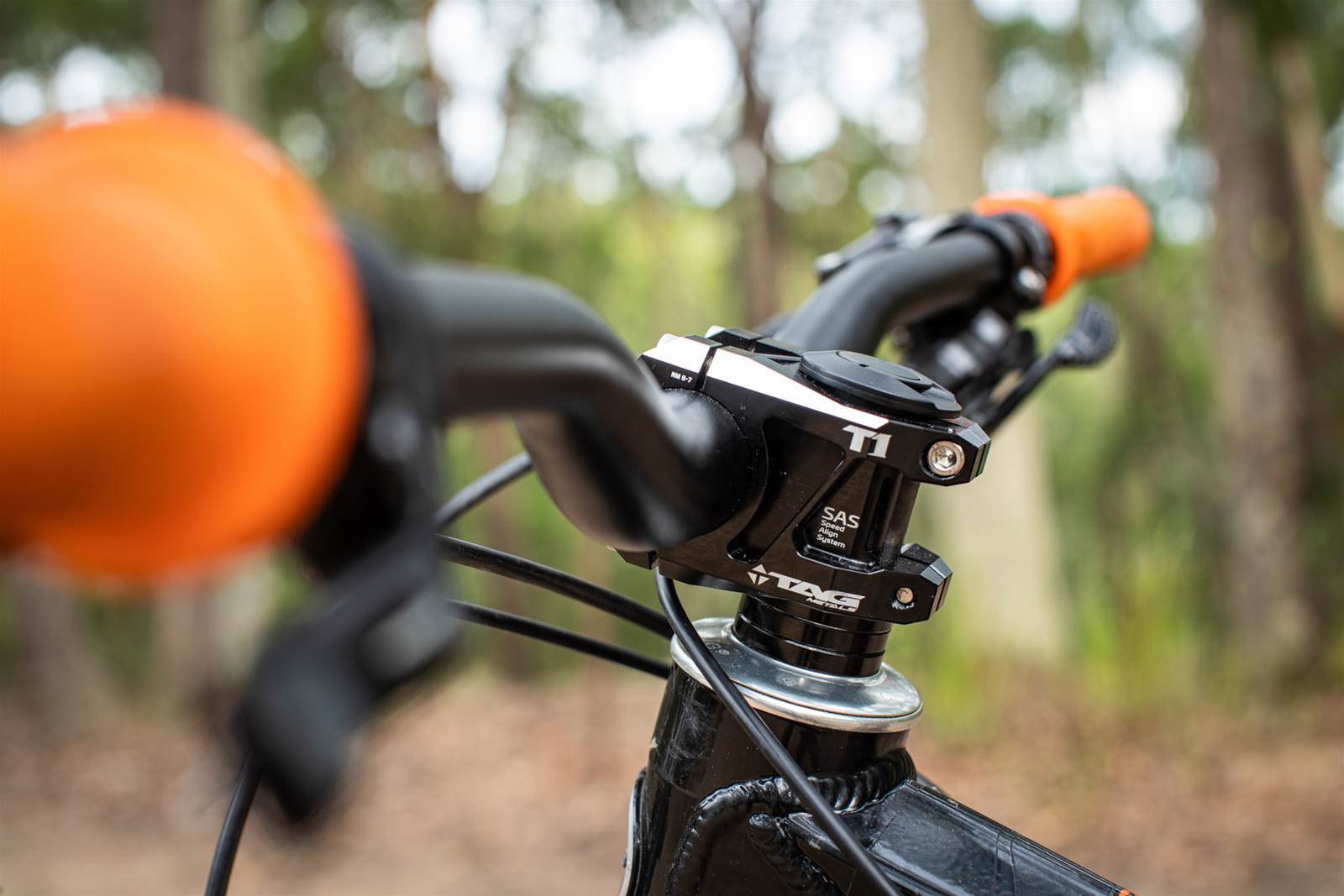 Whilst a number of manufacturers already have stem markers for handlebar roll and centre alignment, TAG take this one step further. The T1 stem has two cut-outs that are meant to align with marks on your steerer for perfectly straight handlebar alignment. Whilst I haven’t seen a fork brand adopting these markings, it’s a great idea. On their handlebar they also have marks for how far outboard your lever clamps sit from your grips, as well as the angle of your controls. Simple touches, but much appreciated if you’re a tinkerer. Compared to their moto compatriots in Renthal and their Apex stem, the T1 stem is in the same price ballpark ($160 for the Renthal and $186.95 for the TAG). The T1 weighs a fair but more (112 grams for the Renthal Apex in a 31mm length versus 166 grams for the TAG T1 in a 31mm length), however when you have the two stems side by side the TAG T1 looks and feels considerably burlier.

Out on the trail, I’ll be the first to admit it’s hard to isolate the performance of a stem, so I’ll talk about it in terms of its contribution to the entire cockpit system. Aside from the ease of getting your cockpit just right that I already mentioned, the entire system was comfortable from an ergonomic perspective. The system also feels more forgiving than many others out there, and I personally prefer 31.8mm diameter cockpits for this reason.

One area that the T1 did impress in a standalone capacity was the lack of slippage on the steerer in the case of a crash. Tightened to 6nm the stem stayed in place far better than something like a Renthal Apex, which I’ve had issues with in the past.

Overall, the T1 is a fantastic first effort from TAG. The SAS markings, ergonomics, ride feel, and general robustness are all in line with the product’s premium price tag. I would personally pick the T1 over something like the Renthal Apex, however if keeping the weight down on your bike is a priority than the T1 might not be the way to go.

The T1 Aluminium Handlebar 30mm is exactly what the name says, an aluminium handlebar with 30mm of rise. The bar comes in an 800mm length as standard, so you can chop it down to size as required using the 10mm cutting guides.

The bars are made from 7005 series aluminium and feel like a quality item out of the box. The SAS markers are once again present, and when used with TAG’s stem and grips it’s nice to know your cockpit setup can be replicated easily. The bars are anodized and shot-peened, which not only looks great but should make them more durable over the long run.

The shape of the bars is nothing revolutionary, with 5 degrees of upsweep and 7 degrees of backsweep not looking or feeling too drastic on the trail. 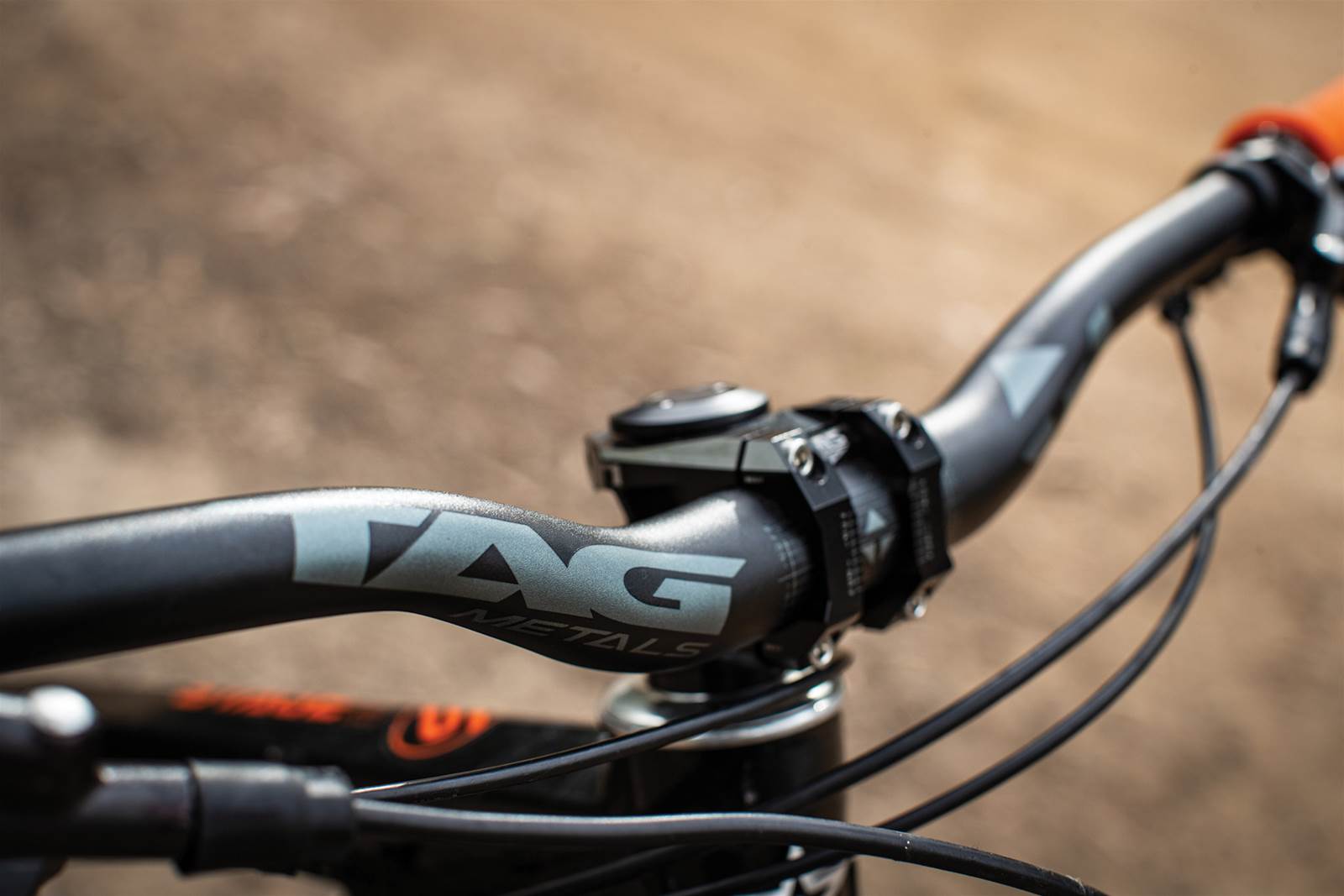 On the trail I found the T1 aluminium handlebar gave me the cockpit position I was after, as well as providing great damping characteristics. As I said about the stem, I personally prefer the 31.8mm standard, and if you’re after a handlebar with a bit more forgiveness than this one could be the way to go.

The T1 handlebar comes in two other alternatives, a 20mm rise and a 40mm rise. It’s also offered in the 35mm diameter in these sizes at the same price.

Overall, the T1 also gets the thumbs up from me as a great option if you’re looking to upgrade your cockpit. The SAS markers are a standout feature from other handlebar brands, and the ride feel was up there with other premium aluminium handlebars.

TAG’s Section Grips are a single clamp grip that uses a similar rubber compound to their MX grips.

The Sections also use the SAS system, and whilst it’s a simple inclusion I was once again pleased at how easy it is to replicate your position across different bikes, or experiment with different positions. 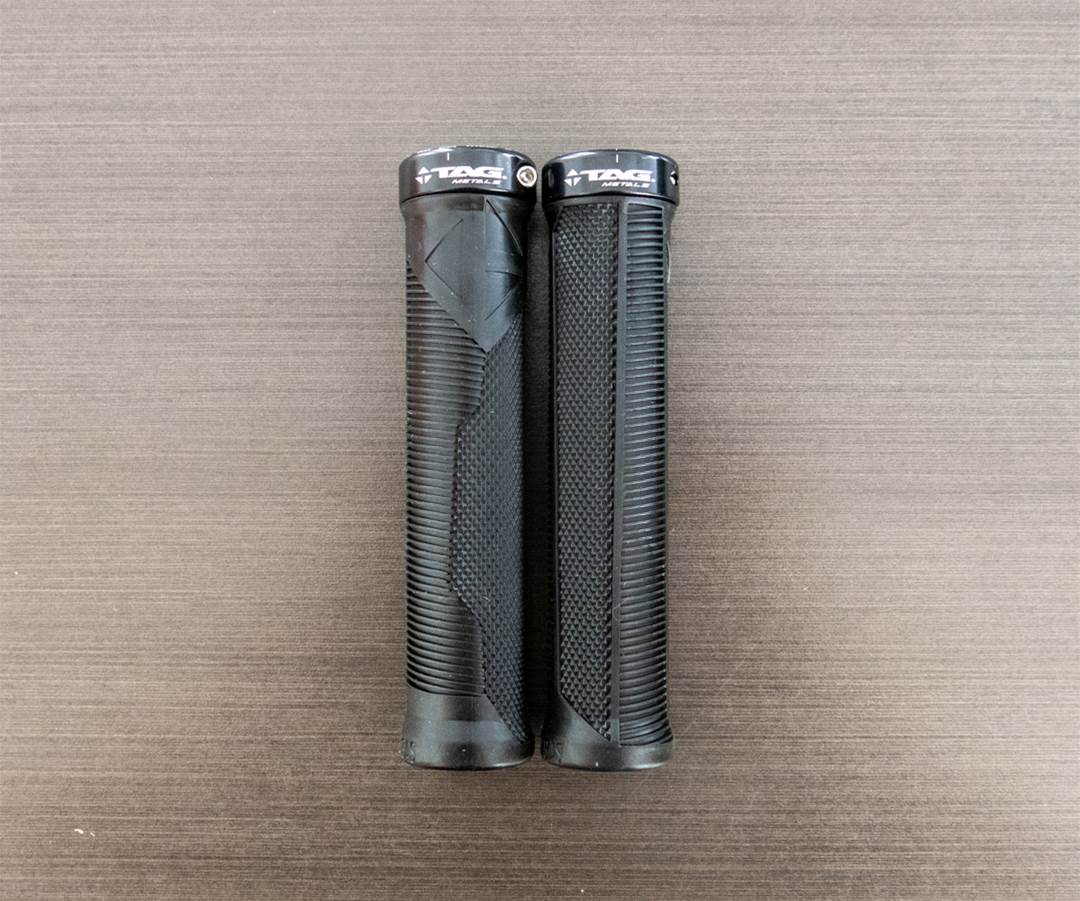 The Sections initially reminded me a touch of ODI’s original AG1 grips due to their thin profile and firmer than expected rubber compound. Despite this initial mental comparison, the Sections are a far nicer grip out on the trail.

I rode with Sections both with and without gloves in dry and wet conditions, and only gloveless in wet conditions did I find myself slipping on the grip due to the firmness of the rubber. I found the grips a bit rough on gloveless hands initially, but this is often the case with new grips before they bed in.

Overall, the Section grips are a comfortable grip both with and without gloves and would be a great choice if you prefer thinner grips.

The Sections are available in 7 colours and weigh in at 93 grams for a pair.

In case you haven’t got the hint by now, TAG come from the moto world. Their Braap grips also use a single clamp, moto inspired rubber compound, and the SAS markers.

These grips feature an inner flange and variable diameter (31mm at its widest and 29mm at its narrowest). The inner flange reminded me of DMR’s highly popular Deathgrips, and out on the trail I found them similarly pleasing for my paws. They were my preference out of the two grips on offer as I felt they were a touch more comfortable, particularly riding without gloves. Despite preferring the Braap personally, I wouldn’t hesitate to recommend both of the grips I tested. If you prefer a thicker grip, the Braap is the way to go, whilst thin grip enthusiasts should like the Sections.

The Braap grips come in at 98 grams per pair, and also come in 7 colours.

Overall, TAG’s first foray into the mountain bike market is a success in my eyes. Their products have a quality look and feel, with trail performance to match. There’s no doubt they’re a premium product and priced accordingly, but if this is the standard of product after two years, I think TAG are a brand that will only continue to grow in the mountain bike world.

Find all pricing and details for TAG Metals via Echelon Sports.

Want to check out more cockpit related reviews? Check out the links below: