Tyres are one of, if not the most important component on a gravel bike. Mike Blewitt checks out Schwalbe's G-One All-round tyres paired with CushCore CX.

I've always been on the fence with gravel bikes, or cyclocross bikes for long off-road rides. There's a fine line between having a bike that's lighter and faster than even a top notch hardtail – and having something that offers a bone shaking ride between stopping for flats all the time. On a rigid gravel bike, your tyres are your only option for suspension. And on most bikes that is going to be a tyre between 38-45mm wide. That's really not much of a footprint on the ground, or bag of air between your rim and the ground to play with.

I hate flat tyres, and a flat tyre is normally my turnaround point on a ride. I always carry spares, but as I have run tubeless on just about every bike I have owned for at least 17 years, once a tube goes in I'm always wary. So anything that can help increase the ride quality of a wheel and tyre system is good news in my books. 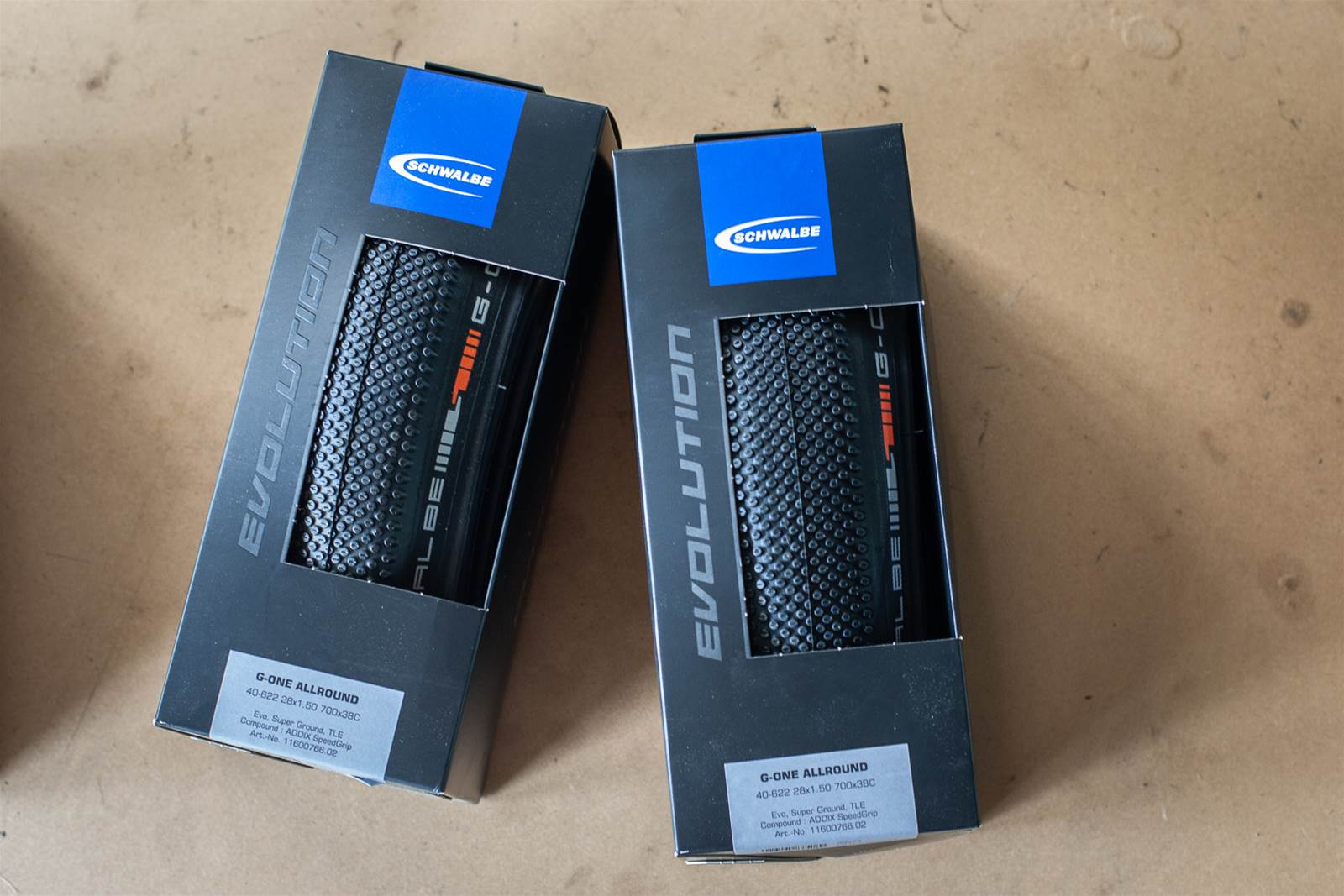 There's lots of pressure on a set of gravel tyres (no pun intended)!

Rim protection like CushCore is almost standard equipment on a lot of mountain bikes, and while I smirked when I first heard it was being made in cyclocross/gravel sizes, it actually makes a lot of sense. Much of the benefit of CushCore is the greater sidewall stability at lower pressures, along with the rim protection. And that's exactly what I was after on my own confused cyclocross/gravel bike.

I was sent a set of CushCore along with a pair of Schwalbe G One Allrounds, which have quite the following in the gravel set. Their tread pattern is a bunch of small dots. While it's low on deep lugs and meaty edge knobs, it is very fast rolling and has lots of edges to hook up onto on smooth dirt, and even in gravel. The 38mm wide tyres I was sent were the best fit for my frame, but right at the lower limit of what I was comfortable running. The tyres weighed 460g, while the CushCore weighed about 120g per end. For a gravel set up this isn't crazy light, but stability and control offers a lot more speed than pure low weight can. The CushCore kit includes the tubeless valves, and the CX/Gravel kit suits tyres from 33-46mm wide. They suit rim widths from 19-26mm – so check your rim widths before ordering.

You've all heard a horror story about CushCore installation. I did as the box instructed and followed the video. It's not as easy as fitting a tyre alone, but it's not terrible. It's easy and manageable, then really difficult for a second, and then fine. Watch the video, take your time, and you'll have no problems. I added some sealant and inflated the tyres to 50psi, to check it all seated. The Schwalbe Tubeless Easy bead and sidewall didn't seep one bit, which is always a good sign! On the road and trail:

I don't own a road bike, I have a Norco Threshold cyclocross bike that I use for any riding not on my mountain bike. Be it long gravel rides, cyclocross races, commuting, adventure rides or club road rides. And the Schwalbe G ONE Allround and CushCore accompanied me on a diverse range of rides for a couple of months. And they never let me down.

My first expectation was that 38mm would be too narrow. While I would happily have a wider tyre, it's the tyre pressure that makes the difference here, and I ended up running around 35psi, much lower than I would on my usual 40mm tyres without CushCore. What's more, it felt far better. Tyre pressure is everything when it comes to gravel.

As the CushCore runs up at least half the height of the sidewall, this setup feels really stable, even on a gravel ride that had fast descents down dirt roads littered with rocks. The trail feel is also very different, feeling far more damped, and without the immediate feedback normally involved with riding a rigid bike with skinny tyres off-road! The greater support from the CushCore not only prevents rim strike that can cut a tyre, it also helps deflect a hit that might cause that, making rougher ground seem a little bit less rough. On one 110km gravel ride in very hot conditions, I didn't feel nearly as beaten up as I expected. I still got sunburnt, but I was far more comfortable on the bike than anticipated.

The Schwalbe G ONE Allround tyres really impressed me with their versatility. I'd often seen them and considered them not fit for the gravel rides in my area – they'd lack the traction. Where were the deep paddles for braking? Where were the good edge knobs? The fact I could run them at a useful pressure meant that none of those concerns were an issue, and they roll far better than my normal go to when riding on the road as well. Moreover, I have been really impressed with the durability of the tyres, with not a lot of tread wear evident even after quite a bit of use, including a 160km road ride with a lot of climbing on rough roads.

I like riding bikes, and prefer to do so off-road than on. A gravel bike is a useful bike to have in the shed for me, but one that has often been limited by what the tyres can and can't do. Having used the CushCore kit with the Schwalbe G ONE Allround, that has changed my opinion. A gravel bike with 38mm tyres will still have its limits, but the general enjoyment of riding dirt roads downhill was much higher than before. The constant vibration was reduced which improved rider comfort, and also increased traction. 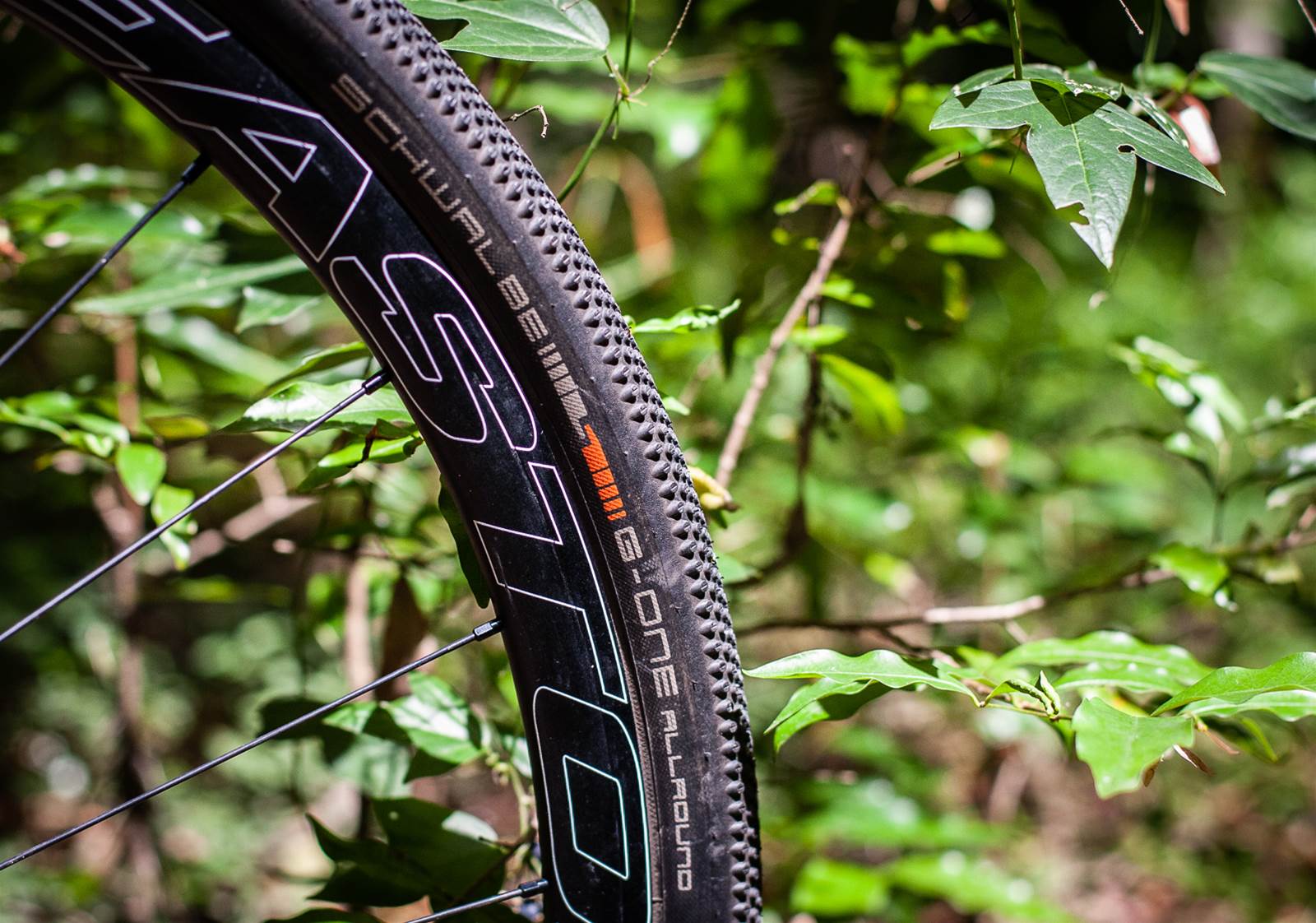 Mike was impressed by the G-One x CushCore combo.

While there is no chance that using this combination will make me reach for my gravel bike instead of a mountain bike for a rough adventure ride, it really has changed how I can ride my Norco Threshold. Getting tyre pressure right for bike handling and traction is important on just about any bike, but this combination has meant I can find a sweet spot with far less compromise. If you have added a gravel bike to your shed, but found it's range a little bit limited by the tyres and the pressures you need to run for stability – then I can highly recommend trying this CushCore system. The Schwalbe G ONE Allround may also be a good addition for you – but let your terrain and intentions dictate what tyre suits you best – just don't write this one off if you think it looks too slick.