The NS Define 130 is the perfect bike to answer your questions about shorter travel trail bikes.

NS (short for Northshore) is a Polish company that began making Dirt Jumpers over 15 years ago. Since then they’ve expanded into all aspects of mountain biking, from their XC focused Synonym to the Fuzz, their downhill bike ridden on the World Cup circuit.

The NS Define 130 is NS’s do it all trail bike, sandwiched between their 155mm Define 150, and the 120mm Nerd. The Define 130 pairs 130mm of rear travel with a 140mm fork and aggressive modern geometry. NS pitch this bike as a do it all machine, saying ‘we believe that it’s big wheels and proper geometry, not the amount of travel that define what a bike can do.’

The Define 130 sits in a pretty trendy category right now. Specialized’s brand new Stumpjumper is also an aggressive 130/140 machine, as is Trek’s do it all Fuel EX range. The more boutique market also has some great 130mm options with bikes like the Forbidden Druid and Yeti SB130, although the latter two have longer travel forks up front. The sentiment remains the same however, that less travel in the rear can do the job, as long as it’s high quality.

You should also look at our Norco Optic, Merida One-Twenty and Pivot Trail 429 Enduro reviews.

The Define 130 1 is the top of the line model, and it retails direct to consumer for $8799 in Australia through Ride Sports. Whilst that’s certainly not cheap, the build kit is pretty dialled for the money. The frame set is a full carbon affair front and rear, with cleverly integrated semi-internal cable routing. Whilst from the side it appears the cables are routed internally; they’re routed externally in a channel that runs the full length of the down tube. The lower down tube and bottom bracket area is sensibly protected with a plastic guard. The chain stay is also protected from chain slap, although I wouldn’t have minded slightly more protection there. The Define 130 uses the same frame as the Define 150 (which has 155mm of rear travel). The travel is adjusted by using a different shock mount and longer length shock. Whilst I wasn't able to test this out, the Define 130’s geometry would work well in a longer travel configuration, so this is a neat feature from NS. While you need a separate shock and fork to have the ‘two bikes in one’ experience, you could have a bike for your local trails and a bike for the mountains far cheaper than buying two bikes. If you’re a handy mechanic, you could even have two air shafts for the one fork and adjust the travel yourself. 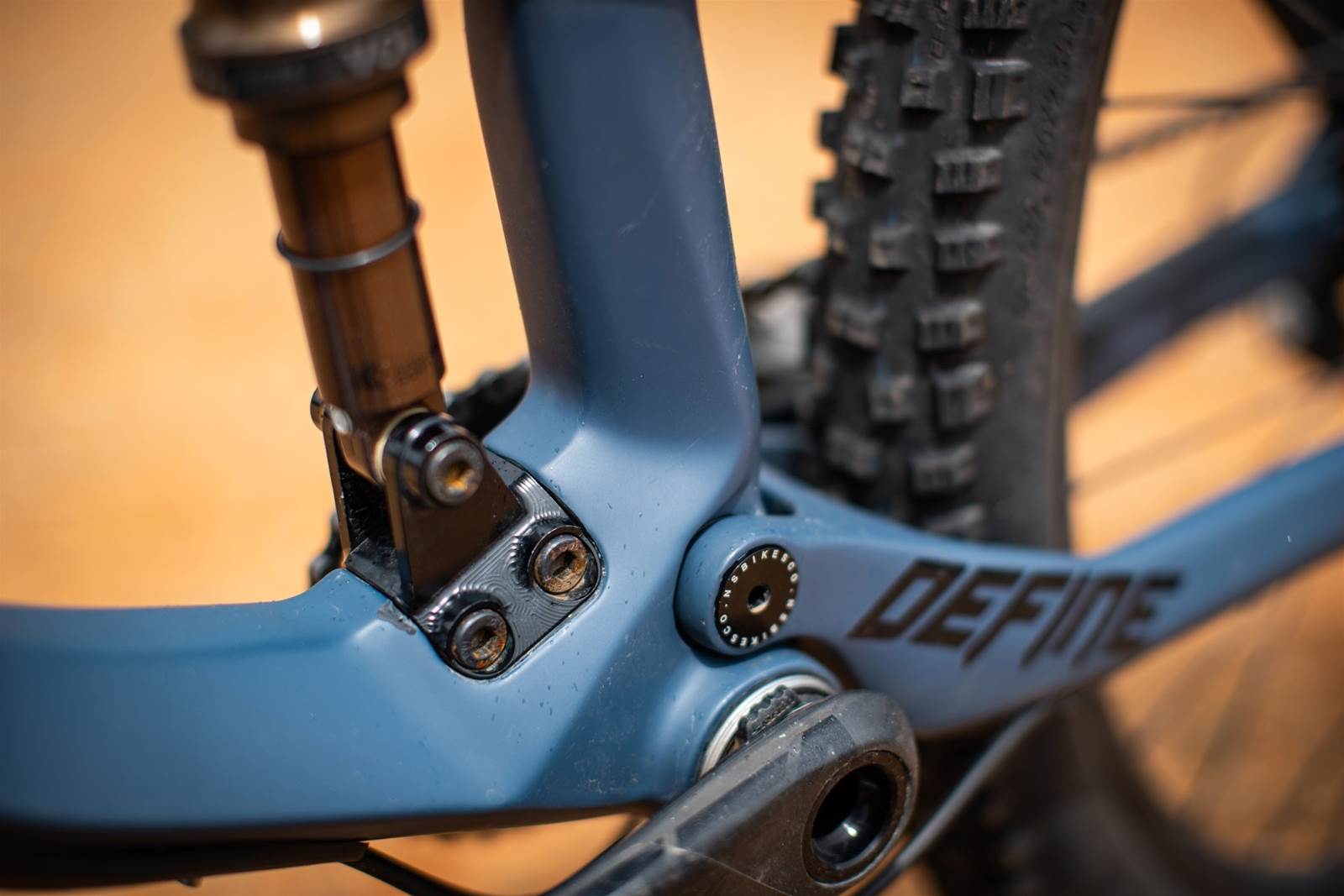 The only tweak I made to the stock spec was changing the front tyre from a Nobby Nic to a beefier Magic Mary. With some rough and loose alpine trails looming on our NSW Snowy Mountains road trip I opted for a touch of extra control up front.

Other than opting for a beefier front tyre, the parts kit on the Define 130 1 is ready for aggressive trail riding out of the box. Subtle indications of this bike’s aggressive intent include the 4 piston SRAM G2 brakes with a 200mm front rotor, and NS’ bombproof Enigma wheels, which feature 32 spokes front and rear. These wheels aren’t a house brand cop out however, with the rims being supplied by Fratelli industries, who also manufacture Spank rims. The Define 130’s geometry is quite aggressive. The bike only comes in two sizes, medium and large, with 17” and 19” seat tubes respectively. I tested a size large, which comes with an adjustable 490/500mm reach. Despite the lengthy front end, the bike doesn’t feel overly long when standing, and the first few rides confirmed the Define 130 has a surprisingly nimble feel. The Define 130's reach is adjustable from 500mm to 490mm via a headset cup adjustment. In the 490mm guise, the bike felt perhaps a touch more nimble, but the difference wasn't massively noticeable. Where this is a real benefit, in my opinion, is for riders in between sizes. Whilst at 185cm I coped with the 500mm reach just fine, if you're on the fence between a medium and large the 490 might feel better for you. The 500mm reach sounds long on paper, but combined with the 44mm offset fork and goldilocks 65.5-degree head angle the bike was plenty manoeuvrable on slower terrain. Riding the bike seated, the steepish 76.5-degree effective seat tube made for a comfortable position for most types of terrain, and with the saddle rail adjustments on offer 99 percent of riders should find their fit. Only on ultra-steep ascents did we find ourselves scooting forwards on the saddle to an uncomfortable extent, but that’s the case on most bikes in those situations.

The cockpit ergonomics are similarly refined. It’s an all NS affair up front, with the License Carbon handlebar being the standout. The bar has a great ride feel, and I got on particularly well with the rise and sweep. The Define 130 strikes a fantastic balance between high speed stability and retaining the ‘poppy’ feeling that riders are chasing from a bike in this travel category. The bike is a confident descender, with the 65.5-degree head angle and 44mm offset fork combining to provide a stable feeling at speed. Despite this, in the turns the Define defies its length, and feels far more agile in both tight turns and higher speed line changes than you might expect. The bike’s ability to get up high for a tight turn or pop spontaneously off a root is encouraged by the active rear suspension. The rear end of the bike gives back plenty of energy when the rider works the bike on the trail, which is one of the delights of a shorter travel bike.

An on-trail example of this balance of high-speed stability and impressive nimbleness was riding Thredbo’s Ricochet and All-Mountain trails. Both of these trails have some high-speed sections, but they also feature tighter turns and turns that reward getting up high. The NS didn’t feel like it was sacrificing its performance in either of these areas. It rewarded me with extra speed when I worked the bike to get high in the turns, as well as finding little transitions and spots to manual on the trail. Another element contributing to the planted high-speed, ‘in the bike’ feel of the Define on the descents is its very low bottom bracket, which has 42mm of drop. Despite this hefty drop I didn’t experience a noticeable amount of pedal strikes riding 170mm cranks.

The rear end of the bike provides a great combination of traction and support. The four-bar linkage combined with the supple off the top Fox Factory DPS shock provided impressive amounts of small bump traction. In terms of overall rear suspension performance, the Define 130 has the trio all brands are searching for of impressive off the top performance, mid stroke support, and enough progressiveness towards the end of the stroke to avoid bottoming most of the time. Despite only having 130mm of rear travel, good suspension kinematics and a good shock combine to give you everything you need for the bike’s intended usage. I did find the limits of the Define 130 on Thredbo’s Cannonball downhill. Whilst the bike rewards a riding style that’s looking for transitions and the ability to unweight over the rough stuff, when there’s no option to do that I did find myself wondering how the bike would perform in its 155mm guise. This being said, trails as rough and technical as Cannonball are few and far between, and for most Australian trail riding I'd take the livelier bike every day of the week. The Define 130 is a bike that encourages you to pre hop a hole to turn it into a transition rather than ploughing straight through.

Climbing on the Define was a pleasant experience. Despite the long reach, the bike doesn’t feel overly stretched out and gets around tight turns just fine. The traction provided by the rear end is also a highlight on the ups and leaving the shock in trail mode for road climbs doesn’t produce noticeable pedal bob. On technical climbs I found myself opening the shock up completely to create better rear end traction. The uphills are another area where a bike like the Define 130 makes more sense most of the time. Whilst the frame set is burly, with some trail tyres and lighter suspension than an enduro bike the climbs are noticeably easier. The Define 130 has more handling agility on singletrack uphills, and less energy is lost on simpler road and fire road climbs.

The NS Define 130 1 does exactly what it says on the tin. It goes up and down trails in a way that’ll have you grinning almost all the time on the trail. It perhaps has a touch of bias towards more aggressive trail riding, but it still performs admirably in less technical terrain. There’s none of the wallowy suspension feeling and slow steering many longer travel bikes have on simpler terrain. On the other side of the spectrum, things have to get pretty technical before I was thinking I could benefit from more travel. My time aboard the Define 130 has had me questioning just how much travel I really need for everyday riding. I think many riders out there would benefit from slightly less travel in a modern geometry and components package. As I mentioned earlier in the review, at $8799 the Define 130 represents pretty good value for money considering its sorted spec, even compared to the big players in this segment. I would love to see the bike included with the mount to adapt to the Define 150 included as standard, or as an aftermarket option with every purchase.

Weight: 13.7kg (as pictured, without pedals)