A stones throw from Derby, St Helens has combine forces with World Trail to open a point to point wilderness trail and an extensive network of purpose built singletrack

Known for its surf breaks, the Tasmanian beach town of St Helens has just cut the ribbon on a brand new trail network, and much-anticipated 42km point-to-point trail from the top of Blue Tier down to Swimcart beach.

The Flagstaff Stacked Loops are situated about 6km from town and have amenities for shuttle drop-offs, toilets, and even somewhere to grab a caffeine fix before you head out for a pedal. From Cecilia Street, it's a quick shot up the Tasman highway or a leisurely pedal down the foreshore paired with 3.8km of singletrack via the Town Link trail. "The networks have been many years in the making; it's on the back end of the Derby Project, as a second follow up stage. World Trail was obviously an integral part of that, and they were instrumental in looking at the whole North East concept," says Ben Pettman, Break O'Day Council's Trail Project Manager. "The idea is for St. Helens to be a town where you can access the trails directly from your accommodation, so you can get on the trail and leave your car behind."

At opening, the St Helens network features eight loops totalling 66km, all of which eventually funnel back into the Flagstaff trailhead — each is named and signposted. For 2020, the Break O'Day Council is continuing its work with World Trail to add more singletrack to the network.

"We are about halfway through that (the trail network)," says World Trail Founder, Glen Jacobs. "They are all the green cruiser trails, a couple of blue trails, and all the gravity trails and wilderness trails are going to open incrementally over the next few months. 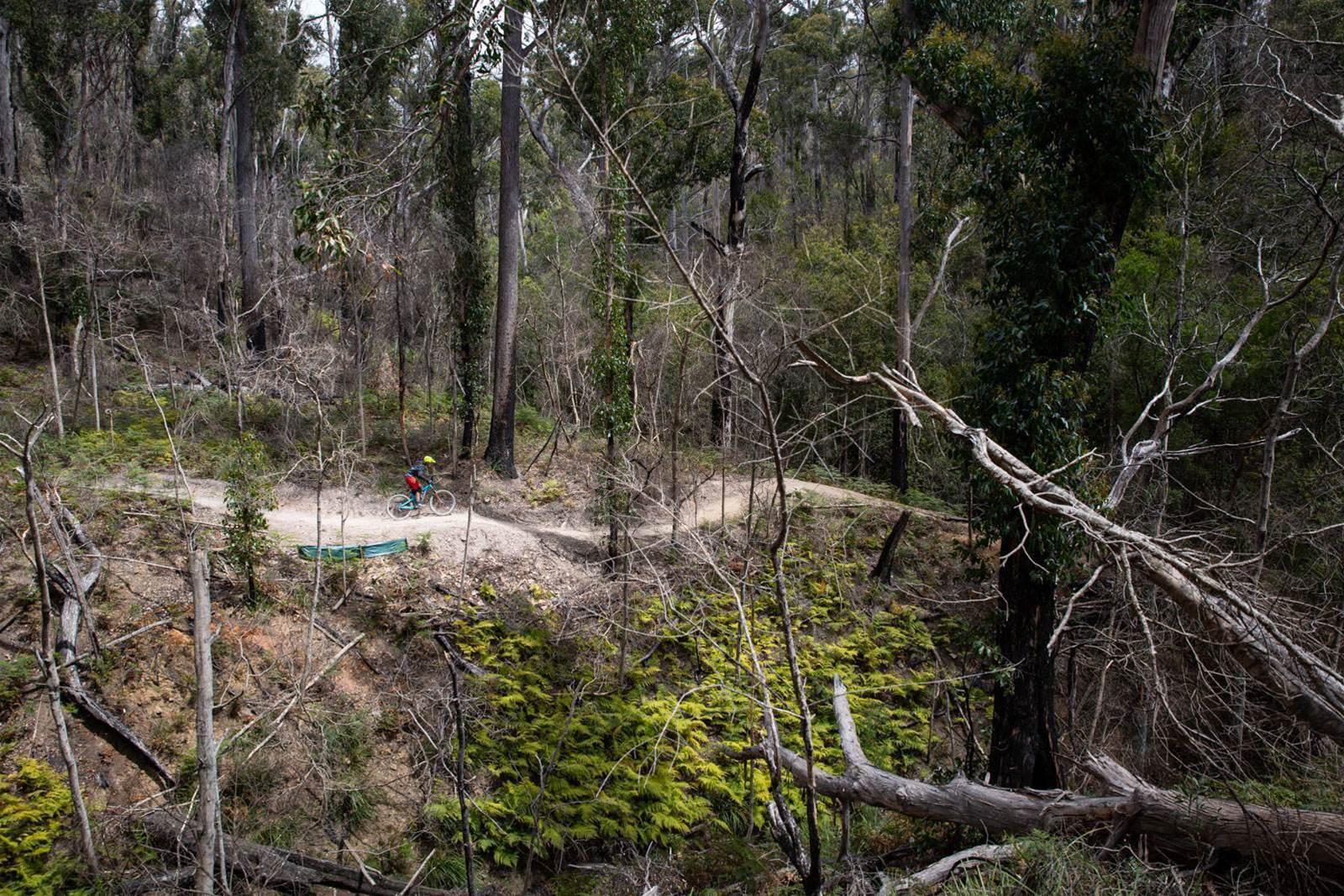 Whereas some mountain bike destinations lean more towards advanced riders, between the Bay of Fires Trail and the Stacked Loops, St Helens has something for everyone.

"The green trails are really awesome for the kids. It's a bit dusty and dry at the moment, but in wintertime, it's going to be excellent with a bit of rain to bed down the dust. It's fantastic for the area," says local Layton Jordan who came to the trail opening with his family.

The Stacked Loops snake through Tasmanian dry sclerophyll forests and as you roll beyond the beginner tracks, trails like Rock Lobster and Old Salty Dog are chock full of jumps, well-supported berms, tight switchbacks and even a few granite features up near the top of the network. Starting from the top of Blue Tier, the Bay of Fires trail descends from the subalpine through a breathtaking temperate rain forest, into coastal eucalyptus, and finally after 42km onto the white sand of Swimcart Beach.

"We went and had a look at St Helen's quite a few years ago when we were here in Derby — the hills are pretty amazing. But, the biggest thing about St Helens is the new Bay of Fires Trail. It goes right up there from the Blue Tier and finishes on a squeaky white beach, there is nothing like it," says Jacobs. From the top of Blue Tier, you ride a 14km descent through dense rainforest

Kicking off with a 14km descent,  the Bay of Fires trail rolls through undulating terrain, before a final ~10km climb and the 7km descent to the beach. Make no mistake, it's a wilderness trail, and there are no services between the top and bottom; bar a bike hygiene station at the halfway point to prevent the spread of phytophthora cinnamomi (PC), commonly known as root rot. So come prepared with lots of food, water, tools and spares.

"The trail is good for fitness and skill development, and despite the length it wasn't overwhelming." says Ange Green, a Hobart local who made the drive to ride the new trails. "For the hardcore mountain bikers, they can make the most of the jumps that are a part of the trail, it's just amazing. It's got a bit of everything and you just want to go and do it again.

Pettman tells AMB the Bay of Fires trail is only a few kilometres short of qualifying as an IMBA Epic trail. Due to land access issues there is a section of fire road starting from about 20km, but according to Jacobs, World Trail is working on this and plan to replace it with purpose-built singletrack. "Six years ago nobody knew anything about Derby," he says. "And now you say Derby, and you know exactly what Derby is; Bay of Fires is going to have that same hit. The Bay of Fire Trail is something that Australia and the world have never seen, and we are excited about being a part of it," Jacobs continued.

Both the Flagstaff Stacked Loops and the Bay of Fires trails are open now. To access the Bay of Fires, you'll need to grab a shuttle to the Blue Tier which will also collect you on the other end— Vertigo Mountain Bike, Premium MTB Transfers and Mad MTB are all running services from Derby, and Gravity Isle from St Helens. For more info on the new trails in St Helens, or to have a look at the trail map, head over to their website, https://www.sthelensmtbtrails.com.au/.