Specialized's new Epic takes another leap, and the Epic EVO turns off its Brain.

Overnight, Specialized launched their new Epic platform, along with an all-new Epic EVO. The Specialized Epic is one of the most winning bikes on the world stage. From World Cup wins, World Championships across XCO and XCM races, and major stage races and prestigious events the Specialized Epic's global popularity has been won by success. And not just at a professional level, but also at an amateur level.

New bikes don't hit the drawing board a few months before launch, they are years in the making. And it should be no surprise that the new Specialized Epic hits the dirt as a Tokyo 2020 bike, along with the Trek Supercaliber and Norco Revolver, and to a lesser extent the Orbea Oiz. Will there be a new Scott Spark launched in the coming weeks? We're not sure (no really, we aren't!) Olympic medals in mountain biking are rare, and designers and engineers pull out all the stops to make sure they can build a winning bike. So what's new on the Epic and Epic EVO?

The Epic EVO doesn't have a Brain

Speak to anyone on the trail who owns a Specialized Epic, and chances are they may bemoan the Brain. With each generation offering greater ability to make the valve open more easily, for the Epic EVO, Specialized ditched it completely. So there's no suspension for the 2nd hit, or rigid feedback when you go to pump, and probably less frequent servicing as well.

Without looking at all the other changes, and differences between the Epic and the Epic EVO, just removing the Brain would likely win over a number of riders, and even win back some. The Epic is a hugely popular bike, but many riders accepted the weaknesses of the Brain along with the strengths. If you're not paid to ride, some eventually found the trade off not worth it. 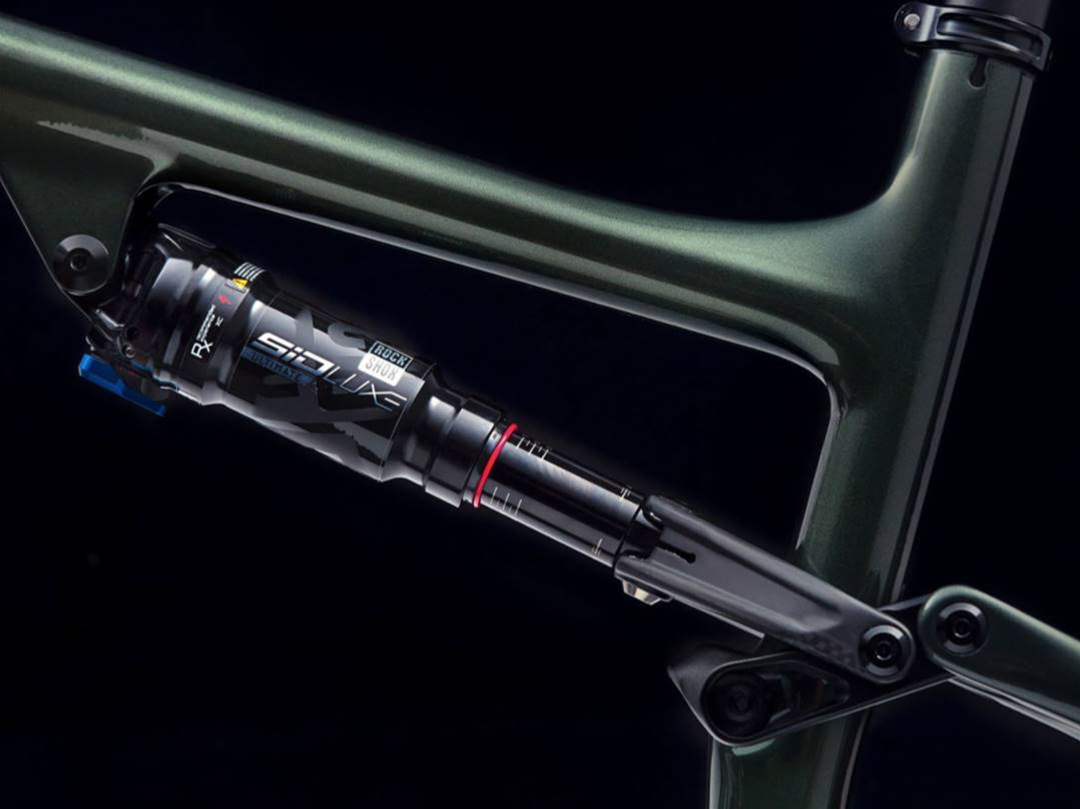 The Epic and Epic EVO are longer and slacker

The Epic has had the head angle dialled back to 67.5 degrees, while the Epic EVO is now 66.5 degrees. Specialized also increased the reach of the bikes, and they come stock with shorter stems The aim here is to keep the front wheel planted on climbs, and a steeper seat angle assists this. That slacker head angle does give greater stability on the steeps, while the short stem should keep your weight far enough behind the front axle to keep you rubber side down. 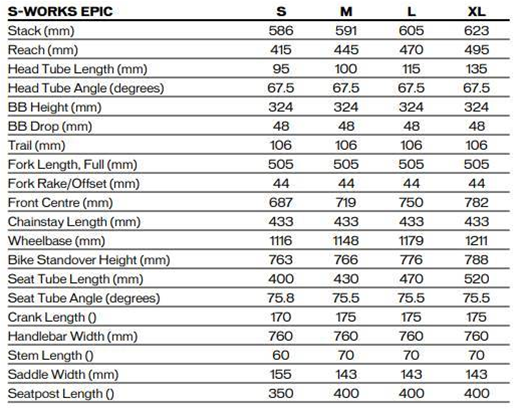 The Epic EVO has a different frame - mostly

The mainframe between the Epic and Epic EVO are the same, but Specialized built a specific back end for the Epic EVO, along with a link that would be strong and stiff to tie the front and back together, and work with the metric shock to give 110mm of quality travel. This is matched to the 120mm fork to create a lightning fast XC rig with trail capabilities. You can call it whatever you like, but unless you're lining up to win national events in the elite category - the Epic EVO is probably the bike you should pick over the Epic. 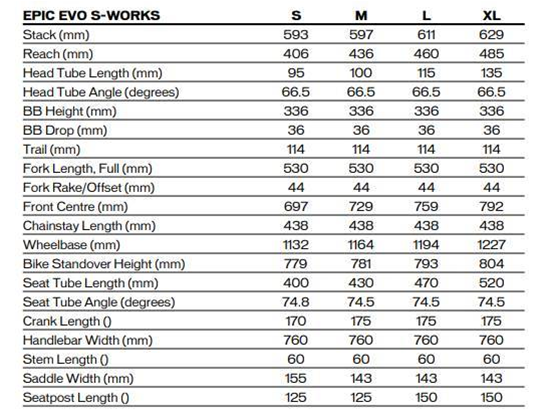 The Epic EVO also has a flip chip to steepen it up a little, but the seat tube is already steeper than the original Epic EVO, which was just an Epic with a 120mm fork, dropper and wider bars and tyres bolted on. There is way more going on with the new Epic EVO, and on paper it looks good.

There's a new RX tune for the Brain

That old Brain, it always needs some attention! Specialized claim they have gone over everything, from how the new chassis operates, to oil viscosity and shim stacks. There's still 100mm of travel and the system should run very efficiently. If you just want to race and have the fastest bike when you kick on the pedals - this is what Specialized bring to the fight. And the record books show how often it has come out on top.

Frames are stronger, lighter and stiffer

This detail could easily fly under the radar, but the last Fact 11m frames of the S-Works Epic and Epic EVO frames are now the material all the bikes use. Of course, S-Works is now Fact 12m and there is not only a 100g saving, but the frames are said to be stiffer and stronger as well. The best just gets betterer.

100g off the frame weight, and a 15% stiffer frame might not sound like something you'd notice. But the frame is the heart and soul of your bike. This is where the ride starts, and added rigidity makes for better performing suspension, better snap out of the saddle, and better control when things get a little bit pear shaped.

Both bikes still take two water bottle cages within the main triangle, except for the XS frame. Don't discount that, as only a few brands do this. The Canyon Lux, Cannondale Scalpel and Orbea Oiz are some of the readily available full-suspension bikes that can do it. Add in the Trek Supercaliber, depending on your thoughts on whether 60mm is full-suspension or not. And the new Kona Hei Hei and of course the Rocky Mountain Element - especially if you're looking at the Epic EVO. There are plenty more smaller manufacturers who have models who can take two cages - but not many. It's actually a pretty big deal for events, and if you're reading this that's probably what you like to do.

So which one do I get?

That's the question isn't it - what is the best bike for you? You need to put your trust in your Specialized dealer to guide you on this one, but as stated above, the Epic EVO will almost always be the better choice. If you're chasing a national title or other pure XC success - then the Epic will likely be for you. If you're one of the best in your state and want to keep it that way, then the Epic is probably also for you. If you want to make it through Cape to Cape as fast as possible and really rip on the trails - maybe you'd be better off on the Epic EVO. If you can only have one bike (hey, that's normal) and don't want to feel like you're lining up at Monaco for the F1 all the time, then the Epic EVO might be for you as well.

If you love going fast but hate gritting your teeth so much, look at the Epic EVO. And if you have already looked at SID 120 and Fox 34 SC upgrades on your current bike - just look straight at the Epic EVO.

What does AMB think of how they ride?

Dunno, we're just interpreting marketing guff and cutting through to the facts. We have a request in with Specialized to test the Epic and Epic EVO back to back with our own version of The Stig. He's a tamed XCO World Cup racer who has represented Australia in elite cross-country and cross-country marathon World Championships, while also racing at the front of The Pioneer in 2019. All going well we will have one of each bike heading to Bright for Sebastian Jayne to lay it all out for how each one rides, and the relative merits of each. And of course, explain what the key features of how they ride are, so you can make an informed decision. Watch this space!

So, what do they cost?

Hold onto your hats! The S-Works Epic sells for a cool $19000. So get some fresh kicks, pedals and a lid and you're dropping $20k.

Pricing for the Epic EVO is similar, with an S-Works model hitting that magic $19000, with the Pro at $13k, Expert at $9.5k while the Comp is $6700. There's no frame only option at this stage. Slide through the gallery above for a closer look at each model.

Want to know more? Well you can surf right over to the Specialized site, but if you're truly hungry for details why not get on the phone to your local dealer? Specialized are known for making sure their dealers are well and trul up to speed on new bikes, and they will have the latest details on availability, plus their own take on what model represents the best value for you, your riding and your aspirations.